Amid protests, Trump says he will designate Antifa as terrorist organization
CGTN 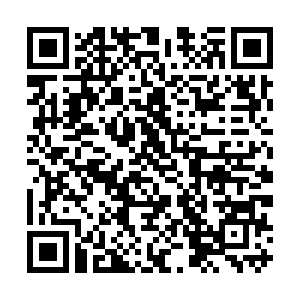 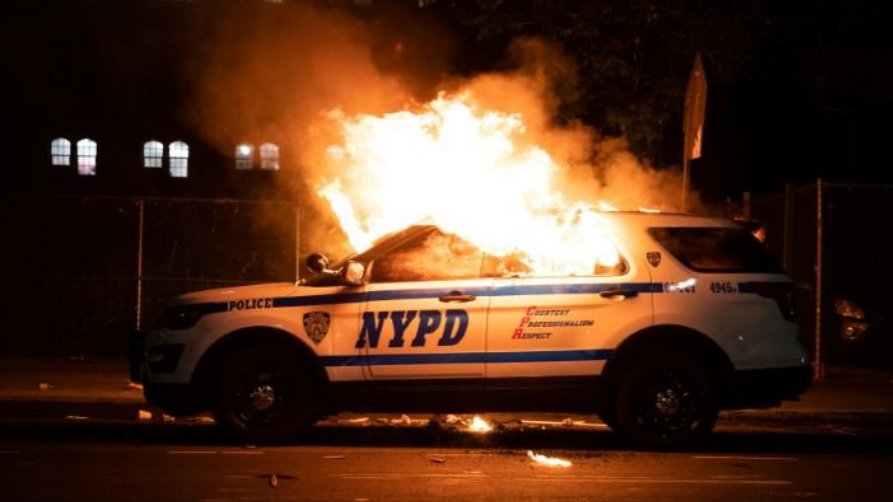 An NYPD police car is set on fire as protesters clash with police during a march against the death of George Floyd, in the Brooklyn borough of New York City, U.S., May 30, 2020. /Reuters

An NYPD police car is set on fire as protesters clash with police during a march against the death of George Floyd, in the Brooklyn borough of New York City, U.S., May 30, 2020. /Reuters

U.S. President Donald Trump said on Sunday the government will designate anti-fascist group Antifa as a terrorist organization, a move that legal experts say would be hard to execute.

The announcement, made by Trump on Twitter, comes after several top officials from the Trump administration, including U.S. Attorney General William Barr, had blamed Antifa and other "agitators" for them "in connection with the rioting" in the protests in U.S. cities.

"The violence instigated and carried out by Antifa and other similar groups in connection with the rioting is domestic terrorism and will be treated accordingly," Barr said in a statement on Sunday following the president's tweet.

It is not clear how many, if any, of the protesters in the nationwide demonstrations are from Antifa, which experts note is not an organization but rather an amorphous movement.

John Harrington, the head of Minnesota's Department of Public Safety, told a news conference on Sunday that about 20 percent of Saturday's arrest records were for people out-of-state, though he did not yet have the total number for Saturday night's arrests.

Trump tweeted on Sunday that crossing state lines to incite violence is a federal crime, threatening if governors and mayors fail to get much tougher, the federal government "will step in and do what has to be done, and that includes using the unlimited power of our Military and many arrests."

Trump's tweet Sunday is not the first time the president has described Antifa as a terrorist group. Other conservative politicians, such as Texas Senator Ted Cruz, have made similar statements.

It is unclear whether the Trump administration is seriously pursuing the designation through formal channels, which would typically require coordination across multiple federal agencies. Experts say Trump lacks the legal authority to do so.

"Any attempt at such a designation would raise significant First Amendment concerns," added McCord, who previously served in the Trump administration. 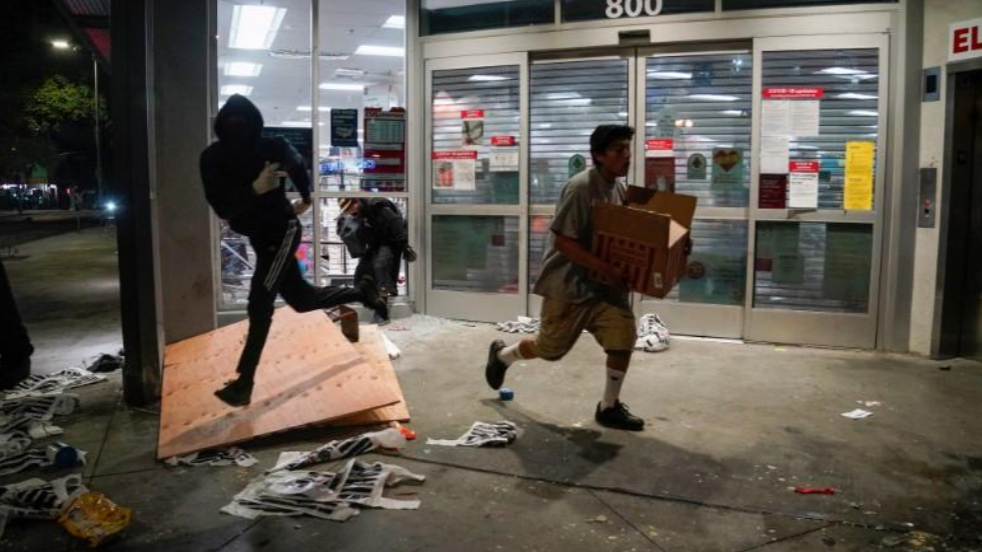 Despite curfews, violence continues spreading in several major cities rocked by civil unrest in recent days, including Atlanta, Los Angeles, Philadelphia, Denver, Cincinnati, Portland, Oregon, Louisville, Kentucky as well as in Chicago, Seattle, Salt Lake City, Cleveland and Dallas, where rioters were seen on video beating a store owner who chased them with a large machete or sword. Police said on Sunday he was in a stable condition.

What began as peaceful demonstrations over the death of Floyd have become a wave of outrage sweeping a politically and racially divided nation. Protesters have flooded streets after weeks of lockdowns during the coronavirus pandemic that threw millions out of work and hit minority communities especially hard.

The closely packed crowds and demonstrators not wearing masks sparked fears of a resurgence of COVID-19, which has killed more than 100,000 Americans so far.

In parts of Minneapolis, the clashes marked the fifth night of arson, looting and vandalism. The state's governor said on Saturday that he was activating the full Minnesota National Guard for the first time since World War Two.  In Minneapolis's adjacent capital St. Paul, its city mayor said about 170 stores in the city have been looted.

Lightfoot said the guard is being ordered to Chicago amid "absolutely devastating" looting and destruction downtown. They would be deployed on the "outer perimeter" of the downtown area as a precaution following a chaotic and violent Saturday evening, during which police made 240 arrests and there were six shootings with one death.

According to national security adviser Robert O' Brien on Sunday, the federal government will not federalize and take control of the National Guard for now. 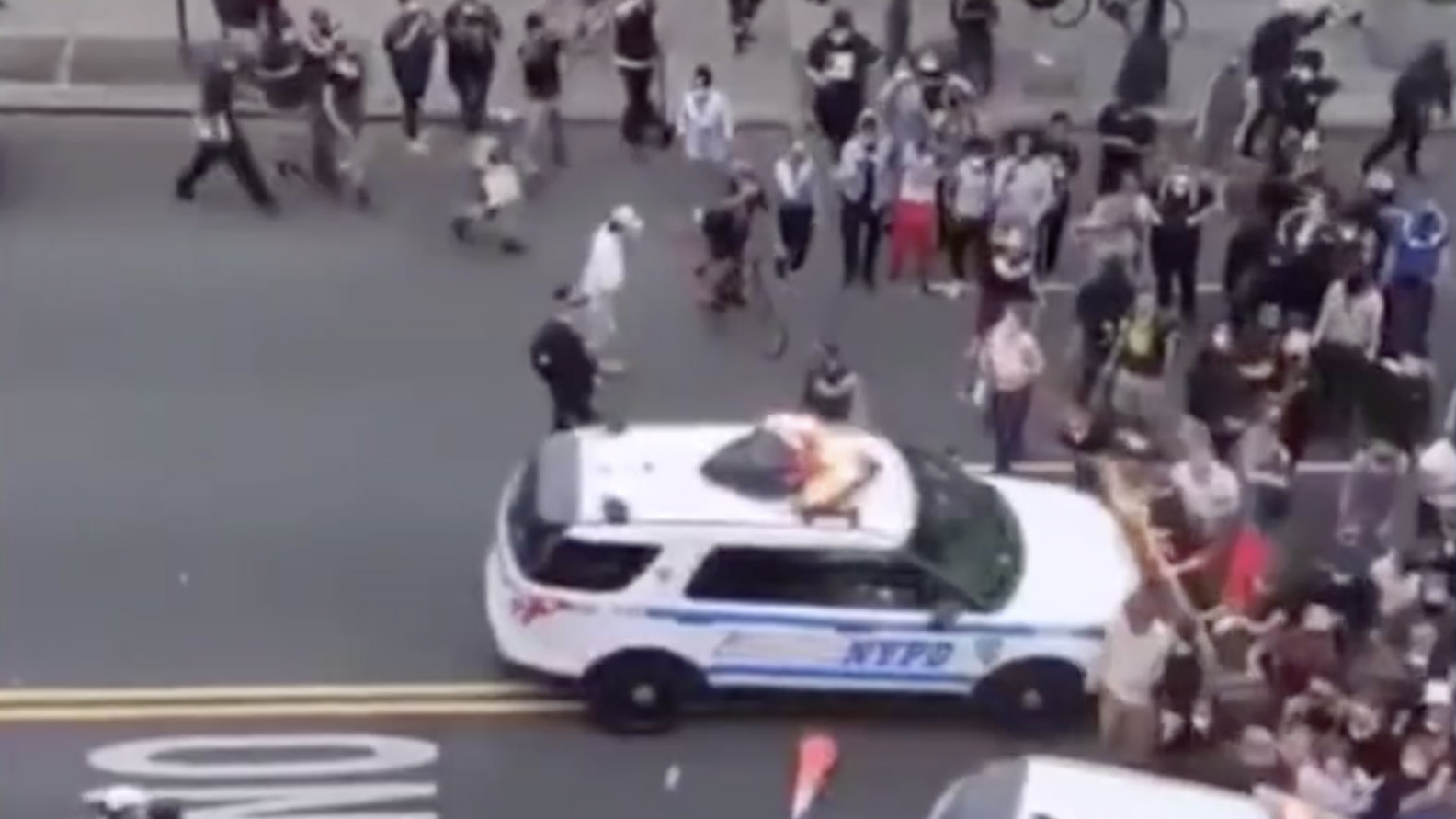 As demonstrators broke windows and set fires, police fired rubber bullets and tear gas to disperse crowds in many cities. In some cases, bystanders and members of the media were targeted.

In one video from Minneapolis, a National Guard Humvee rolls down a residential street followed by what appear to be police officers wearing tactical gear. An officer orders residents to go inside, then yells "light em up" before shooting projectiles at a group of people on their front porch. The city's curfew does not apply to residents outside on their private property.

In New York City, police arrested about 350 people overnight and 30 officers suffered minor injuries. Mayor Bill de Blasio said police conduct was being investigated, including widely shared videos showing a police sports utility vehicle in Brooklyn lurching into a crowd of protesters who were pelting it with debris.

De Blasio said he had not seen a separate video showing an officer pulling down the mask of a black protester who had his hands in the air, then spraying a substance in his face.

As protests keep raging, the arrest on murder charges of Derek Chauvin, the police officer seen kneeling on Floyd's neck, has failed to satisfy protesters. Three officers who stood by as Floyd died have yet to be charged.

Floyd's name is only the latest to be chanted by protesters over the perceived lack of police accountability for violent encounters that resulted in the death of black men.