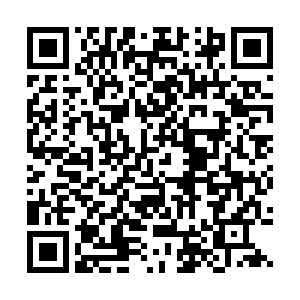 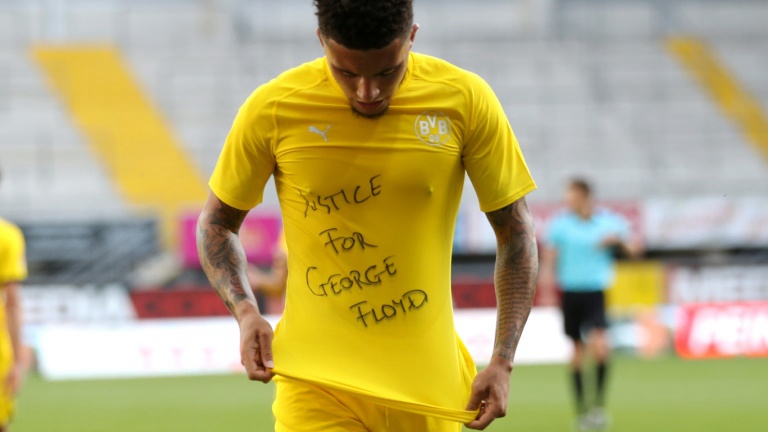 Jadon Sancho, one of the most sought-after talents in world football, on Sunday took off his jersey to reveal an undershirt bearing the words "Justice for George Floyd."

The Borussia Dortmund wonderkid had just again demonstrated a seemingly effortless ability to terrorize helpless defenders by netting a simple tap-in during his club's Bundeliga clash with Paderborn. He went on to score the first hat-trick of his career on his first start since the coronavirus-delayed season resumed in mid-May. Sancho, once again, proved to be one of the best prospects on the pitch at the tender age of just 20.

But as the goals thrust Sancho into the spotlight, he just wanted to send out a message of solidarity towards those protesting against the killing of George Floyd. The unarmed black man died after a Minneapolis police officer knelt on his neck for about eight minutes as he exclaimed "I can't breathe." This disturbing scene was captured on video, sparking mass demonstrations across the U.S. and around the world.

Sancho grew up in south London, but his parents hail from Trinidad and Tobago. He knows only too well the racial pain of a person of color amid an escalation of hostilities over minority groups. He, along with some of his England teammates, were subjected to incessant racist abuse in last October's Euro 2020 qualifiers in Montenegro and Bulgaria. 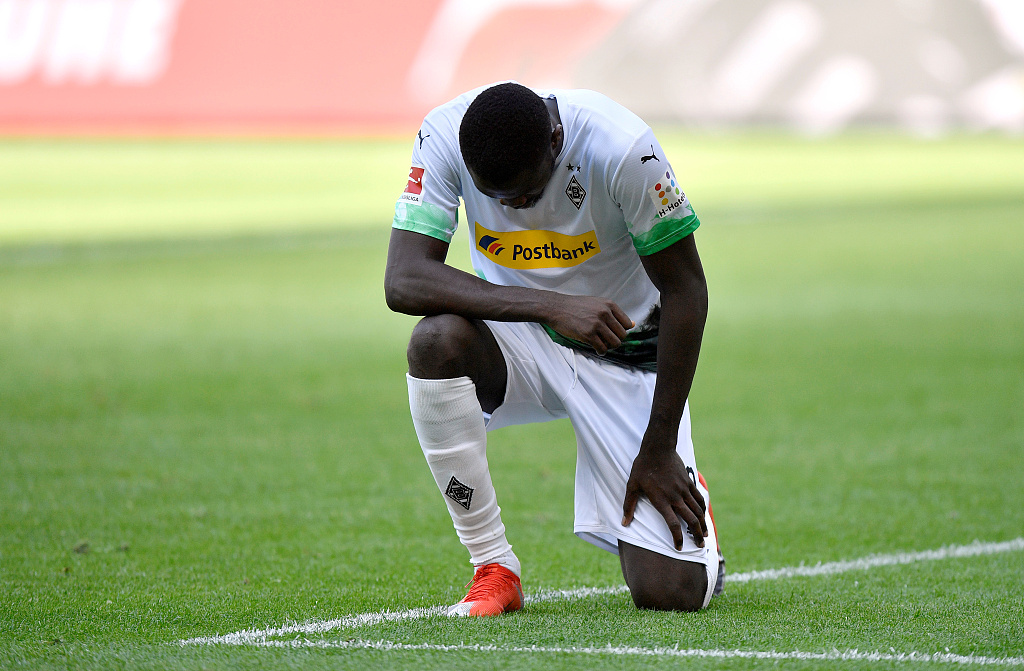 Borussia Moenchengladbach's Marcus Thuram goes down on one knee to honor George Floyd during the Bundesliga clash with Union Berlin at Borussia-Park, Germany, May 31, 2020. /VCG

Borussia Moenchengladbach's Marcus Thuram goes down on one knee to honor George Floyd during the Bundesliga clash with Union Berlin at Borussia-Park, Germany, May 31, 2020. /VCG

"We shouldn't fear speaking out for what's right, we have to come together as one & fight for justice. We are stronger together! #JusticeForGeorgeFloyd," declared Sancho on Instagram.

The English sensation was joined by Borussia Moenchengladbach's French striker Marcus Thuram, who honored Floyd by dropping his left knee to the ground with his head bowed after scoring in his team's win over Union Berlin on the same day.

Later in the day, Liverpool youngster Rhian Brewster also took to social media to call attention to the urgent need for justice in an eloquent yet powerful anti-racism message.

"This is way deeper than just pointing out who's staying quiet and who's speaking up," he observed. "Unfortunately for us black/brown people etc, this is a real life & everyday occurrence in so many different ways. For years & generations we've been screaming out for change and to be heard yet the pain continues..." 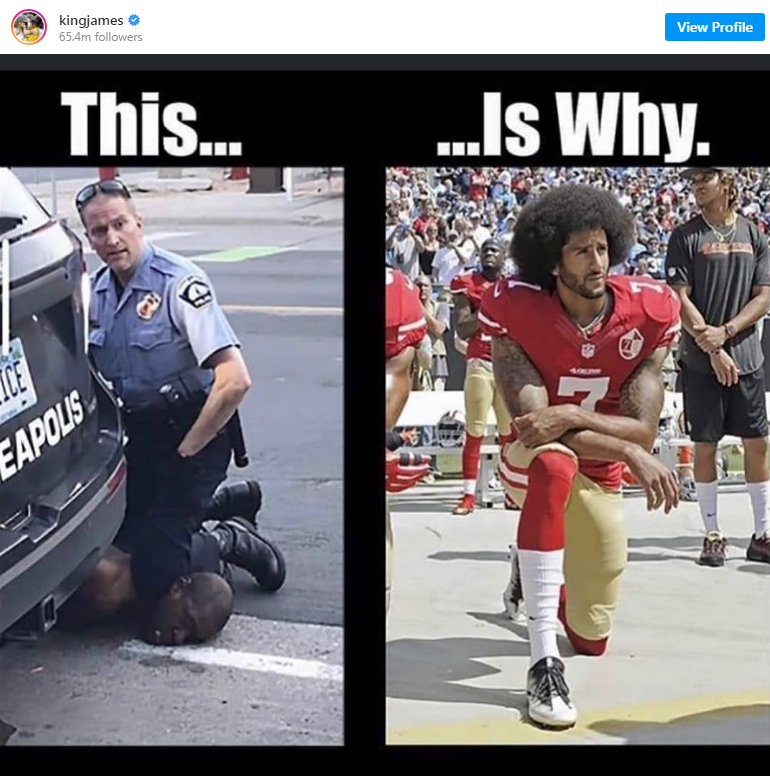 Los Angeles Lakers superstar LeBron James has been using his platform over the last week to draw attention to the death of Floyd. /LeBron James Instagram screenshot

Los Angeles Lakers superstar LeBron James has been using his platform over the last week to draw attention to the death of Floyd. /LeBron James Instagram screenshot

"We've all been shown films like Roots, we've all seen films like Boyz in the hood where this reality is covered and showcased. Yet we are still living these movies in real life. In 2020, today?"

"This goes beyond just #JusticeForGeorgeFloyd, we need justice for us as Human beings. We don't want special privilege. A level playing field is all we have been crying for, forever. Hear us," he added.

The sentiments were echoed by basketball legend Michael Jordan, who stepped up on Sunday to express outrage over the videotaped death of Floyd and voiced a call to stand together for change.

"I am deeply saddened, truly pained and plain angry. I see and feel everyone's pain, outrage and frustration. I stand with those who are calling out the ingrained racism and violence toward people of color in our country. We have had enough," read a statement.

"Our unified voice needs to put pressure on our leaders to change our laws, or else we need to use our vote to create systemic change. Every one of us needs to be part of the solution, and we must work together to ensure justice for all."

The comments came as another NBA superstar LeBron James joined a chorus of top celebrities in sport to speak out on the issue. The Los Angeles Lakers talisman posted an image on Instagram with one side showing the officer kneeling on Floyd's neck and Kaepernick kneeling on the other side, with the words "This... ... Is Why" and the caption "Do you understand NOW!!??!!?? Or is it still blurred to you?? #StayWoke." 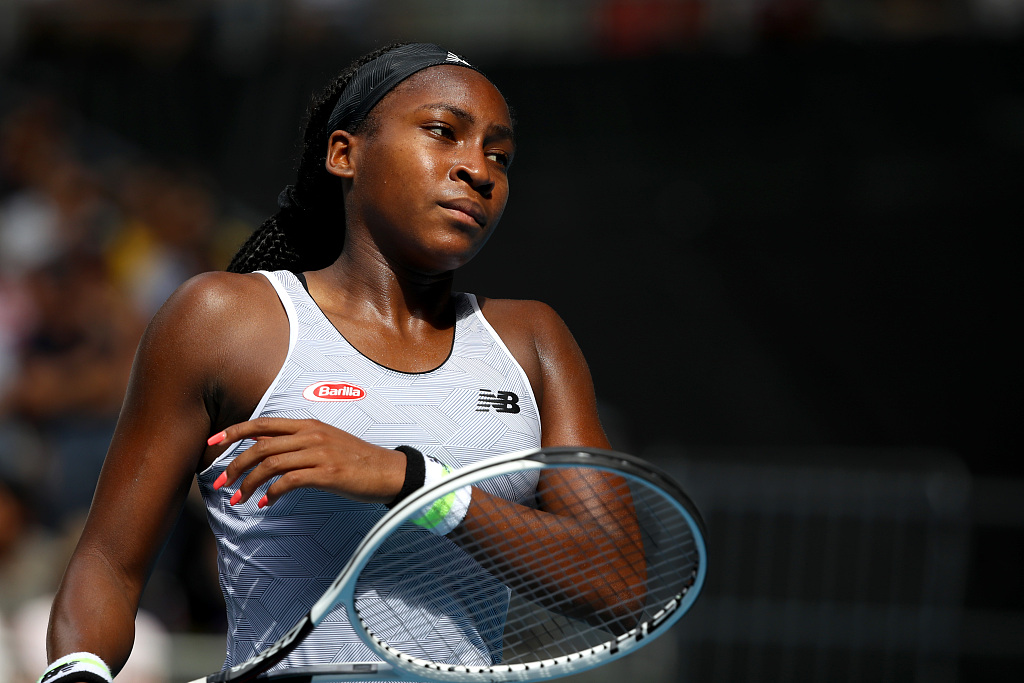 Six-time Formula One world champion Lewis Hamilton, meanwhile, has launched a broadside against the racing community over a lack of racial diversity.

"Not a sign from anybody in my industry which of course is a white dominated sport. I'm one of the only people of color there yet I stand alone. I would have thought by now you would see why this happens and say something about it but you can't stand alongside us," fumed the 35-year-old on Instagram.

"There can be no peace until our so called leaders make change. This is not just America, this is the UK, this is Spain, this is Italy and all over. The way minorities are treated has to change, how you educate those in your country of inequality, racism, classism and that we are all born the same!"

The most heart-rending reaction came from rising tennis star Coco Gauff who, like Sancho, consistently shows maturity that belies her young age.

The 16-year-old African American, who is the youngest women's singles finalist in U.S. Open history, took to Instagram to list the names and photos of other black men, women and children killed in recent years in police custody.

And then she posed a simple question: "Am I next?"