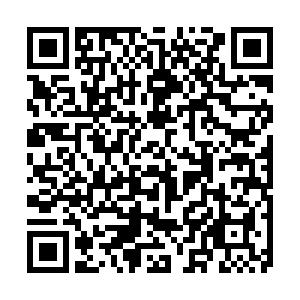 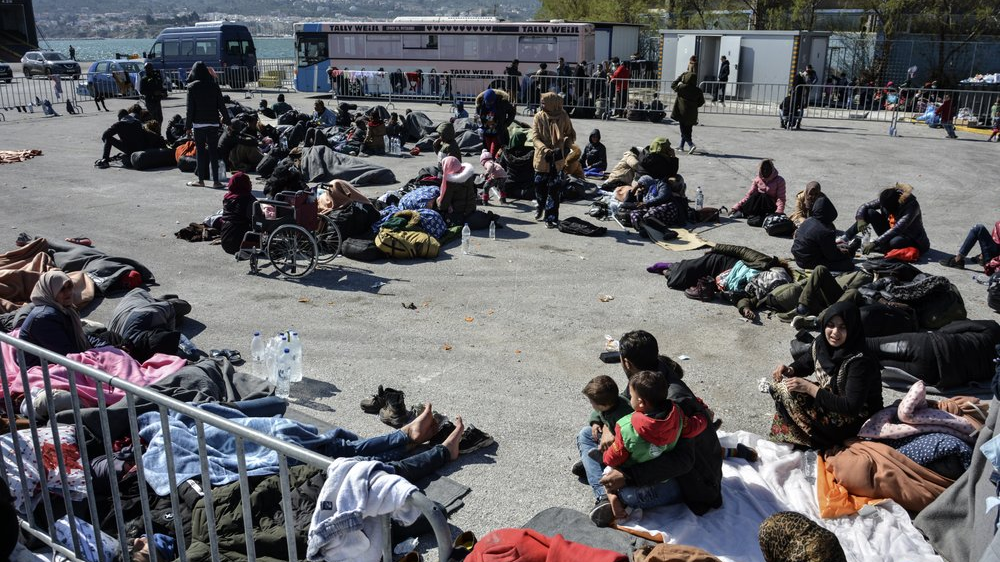 Migrants camp out at the port of Mytilene after locals block access to the Moria refugee camp, on the northeastern Aegean island of Lesbos, Greece, March 3, 2020. /AP

Migrants camp out at the port of Mytilene after locals block access to the Moria refugee camp, on the northeastern Aegean island of Lesbos, Greece, March 3, 2020. /AP

In Greece, thousands of refugees are in temporary homes or in camps. However, due to a new change in policy, they now face a survival crisis as a result of the coronavirus with no protection or help.

Abdelkader Rahmoun, a 44-year-old Syrian, and his family are among thousands of recognized refugees about to lose the temporary homes they were given under Greece's asylum seeker housing scheme.

On Monday, authorities will start moving more than 11,200 people out of flats, hotels and camps on the mainland, to make room for other asylum seekers currently living in dismal island camps.

Rahmoun's family has been given until the end of June to vacate his small EU-funded flat in the port of Piraeus. But he has little confidence that they will find alternative accommodation by then.

"We risk finding ourselves on the street," the haggard former taxi driver and father said. 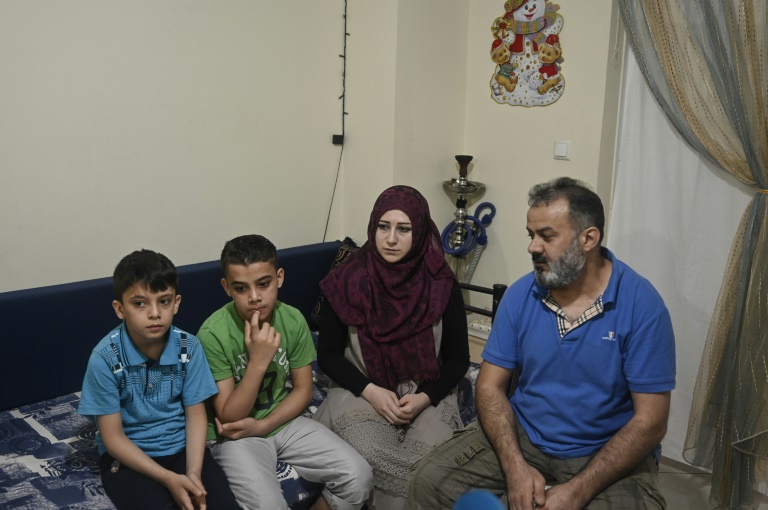 Abdelkader Rahmoun (R), a 44-year-old Syrian, and his family are among thousands of recognized refugees about to lose their temporary homes. /AFP

Abdelkader Rahmoun (R), a 44-year-old Syrian, and his family are among thousands of recognized refugees about to lose their temporary homes. /AFP

Greek officials said housing must be secured for other vulnerable asylum seekers on the islands, many of whom "sleep under trees," Manos Logothetis, the migration ministry's asylum secretary, said earlier this week.

Once they become full-fledged refugees they have the right to apply for Greek tax and social insurance numbers, and should therefore find jobs, the ministry says.

Refugee support groups note that although this is technically true, in reality applicants face insurmountable difficulties.

The country was recovering from a decade-long debt crisis and jobs were already scarce before the coronavirus pandemic, which is expected to bring additional layoffs.

Refugees with precarious incomes also face reluctance from Greek landlords when they seek to rent lodgings on their own.

"UNHCR is seriously concerned about thousands of recognized refugees expected to leave Greece's reception system from the end of May," Boris Cheshirkov, UNHCR spokesman in Greece said.

"Recognized refugees are expected to leave assistance but they do not have effective access to social benefits and support," he said, adding that the language barrier is a further impediment.

The International Organization for Migration runs a separate integration program, HELIOS, that offers language courses, help with job-hunting and accommodation support. But at most the scheme can assist only 3,500 people at a time.

As he is now expected to fend for himself, Rahmoun said his monthly benefit of 400 euros (440 U.S. dollars) will also be cut. 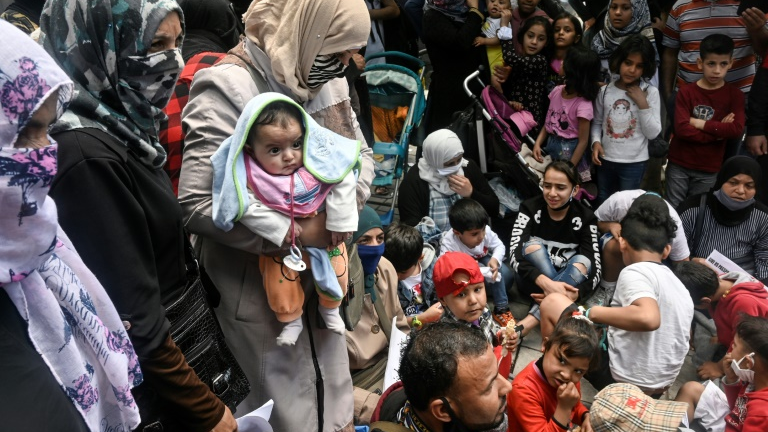 Greek authorities will start moving more than 11,200 refugees out of flats, hotels and camps on the mainland. /AFP

Greek authorities will start moving more than 11,200 refugees out of flats, hotels and camps on the mainland. /AFP

The family from Idlib changed homes several times to protect themselves from bombardment during Syria's civil war, before eventually fleeing the country.

Now, after "struggling to survive" for the past decade, they must "start from zero again," Rahmoun said.

Several neighbors in the block of flats where the Rahmouns live face a similar predicament. Out of 10 families in the building, six have been told they must leave in June.

One family from Iraq includes a father in a wheelchair and a five-year-old girl who requires assisted feeding through a gastric tube.

They had a disabled father and sister. "How could the Greek government be throwing us out into the street? This is cruelty," said the family's eldest son Mustafa.

Migration Minister Notis Mitarachi has said the housing transfer process had been due to start in April but was delayed because of the pandemic. 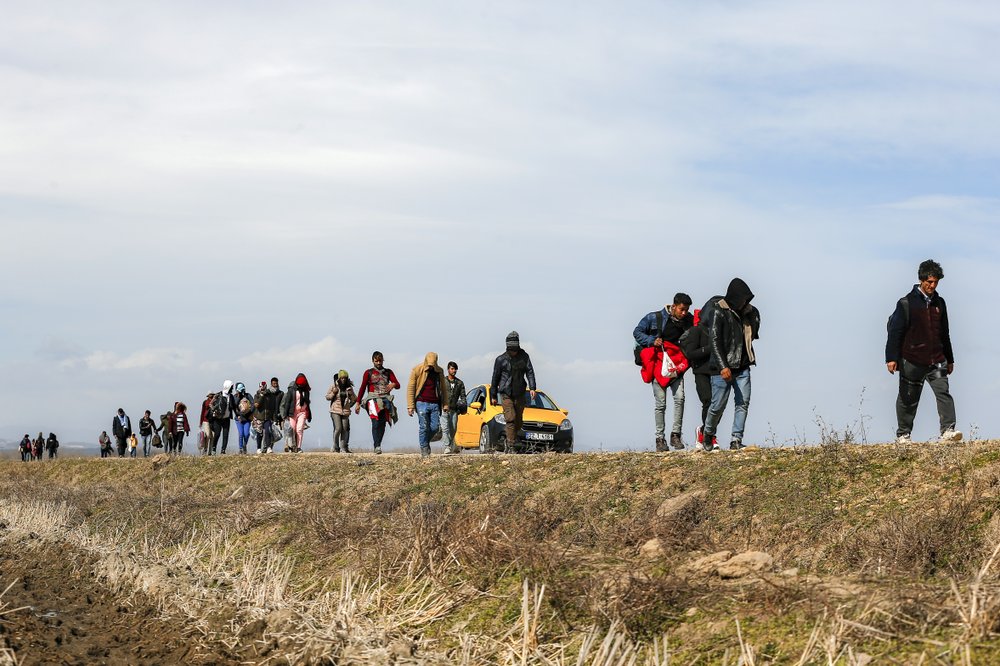 Migrants walk on the road near the Ipsala border gate in Edirne at the Turkish-Greek border, March 3, 2020. /AP

Migrants walk on the road near the Ipsala border gate in Edirne at the Turkish-Greek border, March 3, 2020. /AP

Refugees used to be able to keep their accommodation for up to six months after receiving protected status. But, the new conservative government of Prime Minister Kyriakos Mitsotakis has reduced this period to just a month. Officials have repeatedly said Greece must become a less attractive destination for asylum seekers.

Accommodation and benefits for those granted asylum would be interrupted. From then on, the refugees would have to work for a living. This would make the country a less attractive destination for migration flows, Mitarachi said in March.

The government also has political considerations. The continued presence of more than 32,000 asylum seekers on the islands, over five times the intended capacity of shelters there, has caused major friction with local communities who demand their immediate removal.

An operation in February to build new camps on the islands of Lesbos and Chios had to be abandoned amid violent protests. Rights groups have repeatedly criticized unhygienic and unsafe living conditions in existing camps.