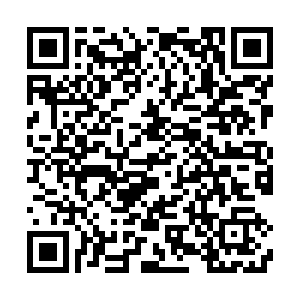 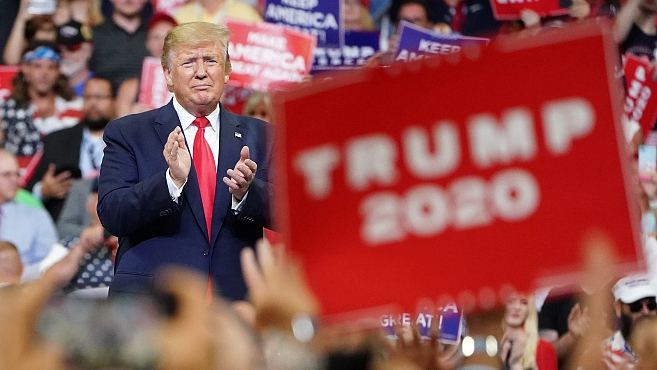 Editor's note: Francisco Quiero Aguirre is a PhD candidate in applied economics at Capital University of Economics and Business. The article reflects the author's views and not necessarily those of CGTN.

It's almost common sense that a superpower like the United States is capable of self-sustaining during a global pandemic. Mostly, the feeling that the country can do so comes from the fact the U.S. is responsible for around 20 percent of the global GDP in 2019. However, the COVID-19 pandemic has revealed to the world the U.S. economy is more like a facade.

There are several problems in the U.S. economy, even now in 2020. First is the composition of local demand. Demand is mostly sustained in the U.S. by household debt on consumer credit. This naturally leads to a problem of liquidity in the long run for families: They have less money and increasing debt.

Second is the international demand for U.S. goods with a protectionist president. International demand allowed production to keep flowing, creating jobs and smoothly increasing worker's real wages. When the flow of revenues from the financial institutions to households was cut-off and world demand contracted, the market reacted as expected. Wages moved downward faster than prices, and the contraction in total demand reduced aggregated supply.

After monetary shocks had led to bigger distortions in the market, making money scarcer to consumers and firms. Paradoxically, this last fact occurs in a moment where money supply should be more accessible, this last due to the downward turn in real interest rates dictated from the Federal Reserve of a 0.25 percent for April 2020. Government purchases and financial stimulus had been insufficient in correcting the real rigidity in the U.S. market. Real rigidity, which is the maladjustment between the real and nominal values on prices, wages and interest rate, is the actual disease of the U.S. economy.

The evidence supports our argument. As revealed by the BBC, the development in technology consumption has led to the creation of new jobs and profits. But, this is not enough to counter the more than 30 million Americans looking for a job. The economy is veering toward a recession faster than it was during the Bush administration. It is a trend hard to revert. This trend of recession is consistent with the change of speech from the White House - from seasonal flu to the biggest threat to the U.S. economy since the big depression. We must face an uncomfortable truth about the U.S. economy: Household debt related to U.S. GDP. 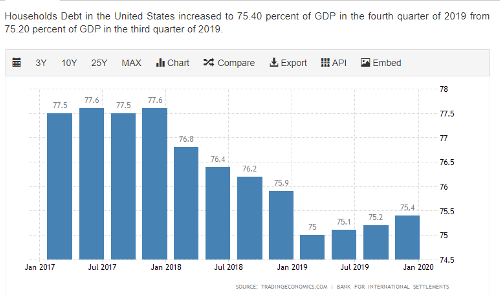 Under  the Trump administration, household debt fluctuations turn into an average of 75 percent, forecasting an increase to 84 percent to January 2022, according to Trading Economics. GDP per capita will continue its declining tendency until the second semester of 2022 as government spending keeps a flat trend with few increases forecast in 2022. As evidence shows, government spending is countercyclical, but we don't see much support of this evidence in the actual U.S. economy. 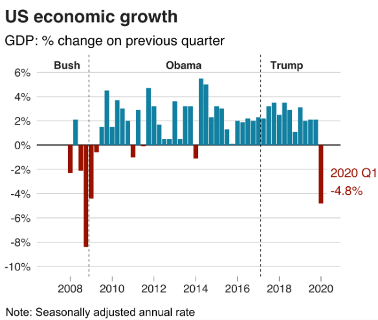 We must add a contraction in capital flow to the U.S. and a foreign trade balance deficit over the main in the last three years, which is basically less money entering the U.S. importing and more goods than exported. Indicators are showing a really difficult recovery if U.S. government purchases keep flat, and investors remain skeptical of the government and market behavior. Fortunately, the data shows no evidence of a possible stagflation scenario in the short run as inflation keeps falling, but slower than GDP's fall and unemployment's increase.

The GDP is not a good indicator to classify economic performance. It must be considered along with other indicators. GDP per capita growth in the U.S. had been accompanied by high debt ratio from households, low inflation, high unemployment, high trade deficit and a flat government spending. These conform to a fragile economy susceptible to monetary shocks.

Economic evidence shows economic behavior and is also based on expectations, and trading markets are resilient to invest in an economy led by a protectionist leader who defends a false trade-off between the economy and public health.  We must learn not only from the fragility of the U.S. economy but also from the actual U.S. leadership. Economics is full of paradoxes, like price stability in moments of economic crisis as real wages are falling and money flows are scarcer when money was more expensive to consumers. We are facing the worst of all worlds: a fragile U.S. economy in times of a stagnating global economy.

As the old saying goes, the old must be replaced by the new. The eyes are now set in the East.