The protests that have engulfed U.S. cities in the past few days were triggered by the death of George Floyd, an African American man who died after a white police officer held him to the ground and pressed his knee on his neck for nearly nine minutes.

But the systemic racism and inequality that African Americans, Latinos and other minority communities face every day laid the groundwork for this explosion of anger and outrage.

The U.S. is notorious for putting more people in prison than any other country: its prison population accounts for over 20 percent of the world's total, according to the Prison Policy Initiative.

And African Americans are incarcerated at a much higher rate than anyone else.

Advocates for prison reform have long argued the justice system is skewed against people of color. 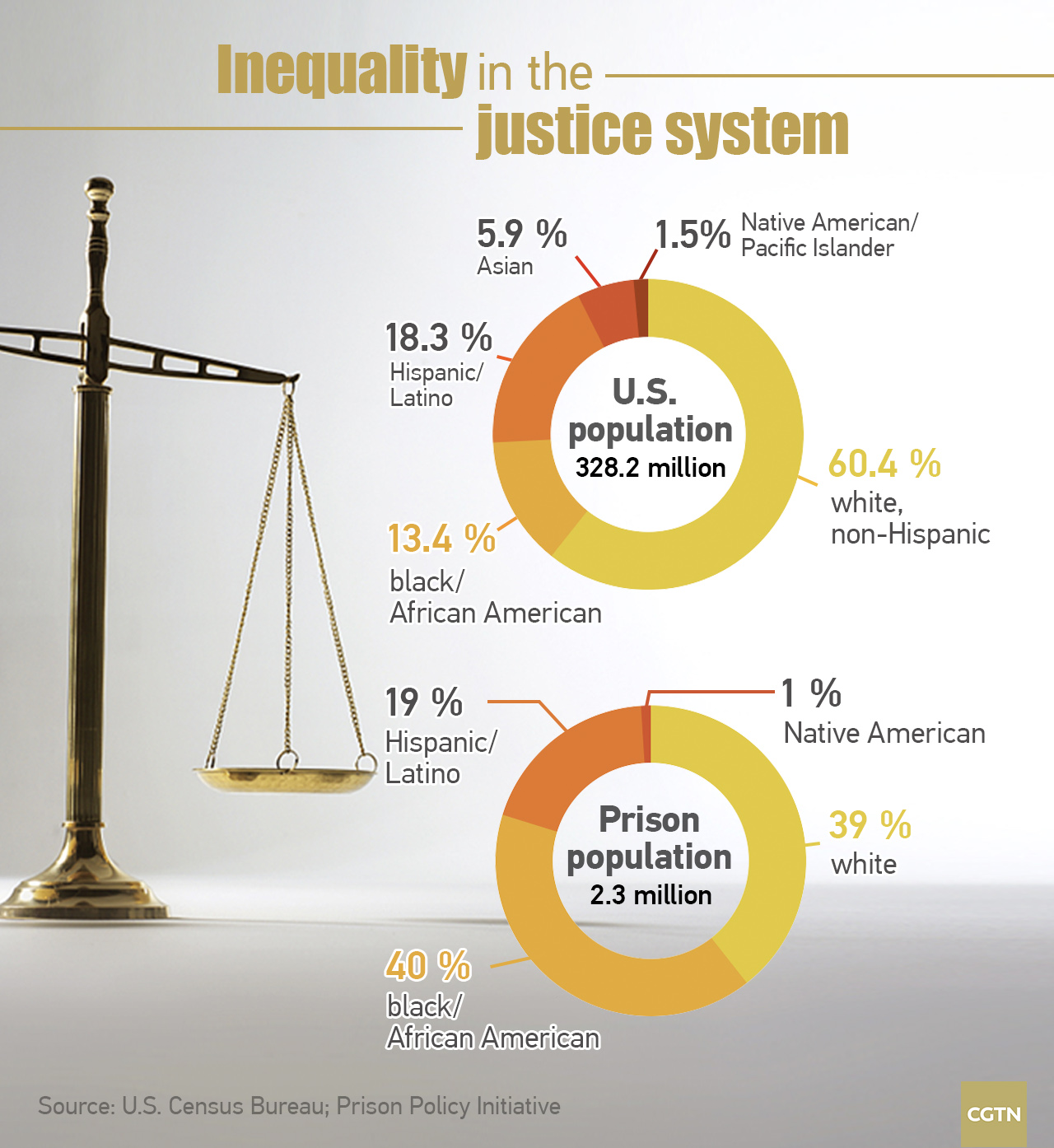 Prosecutors will often demand a longer and harsher sentence for a black defendant than for a white one, and despite similar rates of drug use in both communities, blacks are arrested for drug law violations more frequently than whites, the report said.

The Stanford Open Policing Project also found that black drivers are more likely to be stopped and searched by police than white drivers.

In 2018, the median income of black households was 41,361 U.S. dollars, compared to 70,642 U.S. dollars for non-Hispanic white households, according to the U.S. Census Bureau's Income and Poverty report.

Meanwhile, the poverty rate for African Americans was 20.8 percent, more than twice that for non-Hispanic whites (8.1 percent).

This has had far-reaching consequences on everything from food security to housing, health insurance and education.

About 40 percent of homeless in the U.S. are African Americans, even though they make up just 13 percent of the country's total population, according to the National Alliance to End Homelessness.

People of low income also have more difficulty paying bail money or securing top lawyers to defend them, contributing to the high incarceration rates in the black community.

Indeed, the Prison Policy Initiative estimates that 65 percent of people in jail have not been convicted but instead, are being detained pre-trial.

The COVID-19 epidemic also exposed the inequality that black communities face even when it comes to health.

The COVID Racial Data Tracker found that African Americans made up 24 percent of deaths so far, almost twice their population share.

Experts linked this to housing location, healthcare access, underlying health conditions and the fact that a disproportionate number of people in the community work in sectors deemed essential, such as healthcare and services.

Even before the pandemic hit, social and economic factors meant African Americans were more likely to suffer from diabetes, high blood pressure or stroke, and between the ages of 18 and 49, they are twice as likely to die from heart disease than whites, according to the Centers for Disease Control (CDC).

Yet, far fewer of them benefit from top health coverage: U.S. Census Bureau data from 2018 showed that 74.8 percent of whites had a private health insurance, compared to 55.4 percent of blacks.

Racial inequality expresses itself in a myriad of other ways in everyday life.

About 6.5 percent of blacks are unemployed, compared to 3.9 percent of whites. And studies have found that African Americans continue to be discriminated against at work and during the hiring process.

In low-wage jobs, "Black and Latino or Hispanic workers earn less than white workers with equivalent educational levels and experience," a report by the Brookings Institution noted in November.

Among Fortune 500 companies, only four currently have a black CEO, and the 2018 Missing Pieces Report by the Alliance for Board Diversity found African Americans held just 8.6 percent of board seats in those companies, compared to 83.9 percent of seats for whites.

Meanwhile, felony disenfranchisement laws – whereby anyone convicted of a felony can no longer vote – has meant that one in 13 African Americans has lost their voting rights, according to the Prison Policy Initiative.

Police brutality of the sort that killed Floyd "has been a clear feature of black life in America," and is a "problem that seems to be ever present and never quite goes away," Minnesota Attorney General Keith Ellison said in an interview with The Nation.

"But the kindling that made the house burn down was joblessness, unemployment, poor housing, concentrated poverty, people without opportunity who were just done with that and needed to do something, anything, to get the attention of everybody else to say, 'This must change'."