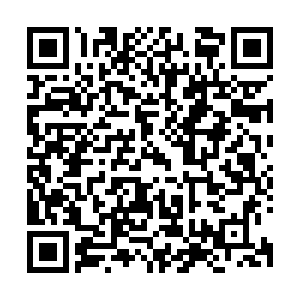 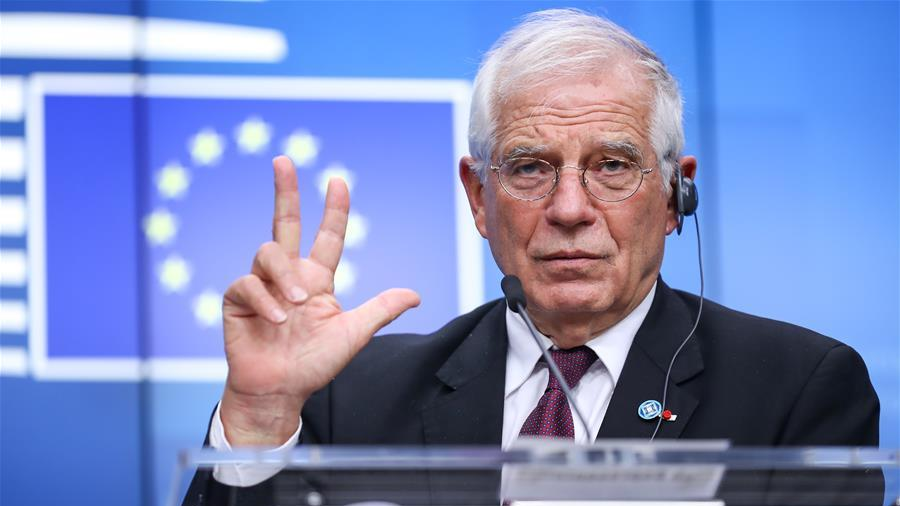 The High Representative of the EU for Foreign Affairs and Security Policy Josep Borrell Fontelles on Sunday ruled out "aligning" with the United States against China and played down the idea of "systematic rivalry" with Beijing, as he entered a video conference with the foreign ministers of their bloc and U.S. Secretary of State Mike Pompeo.

Not surprisingly, the latter only had the agenda of China on his mind, eager to try to win European states into supporting his increasingly militant policy on Beijing, with him vilifying China on a near daily basis.

However, the carefully timed comments by Borrell aimed to play this down, stating that whilst European relations with China were "complex" and "multifaceted" with disagreement in some areas and collaboration in others, ultimately he set out that "cooperation and consensus are always greater than competition and differences" and promised a "big, positive agenda for EU-China cooperation where good faith negotiations can produce good outcomes for both sides." He also criticized the unilateral decisions of the Trump administration "which we do not always agree" with.

Whilst certainly Borrell can only speak as a representative of the European Union and not on behalf of the foreign policy of individual member states, nevertheless the comments are an important assurance in a rapidly changing international context when the U.S. is openly seeking confrontation with China and intensifying economic uncertainty.

There is little question that many of Europe's best interests continue to lie in a positive relationship with Beijing, which cannot be achieved by confrontation and burning bridges. He is absolutely right to note that this is hardly a zero-sum game.

The continent must continue to resist American hawkishness and pragmatically work with China, as a bloc, to secure its position.

The fact that there is such a glaring difference between Washington and the countries of Europe concerning China is just one of many factors that have led to a dramatic decline in transatlantic relations, owing to what Borrell quite openly notes is the unilateral foreign policies of Donald Trump. 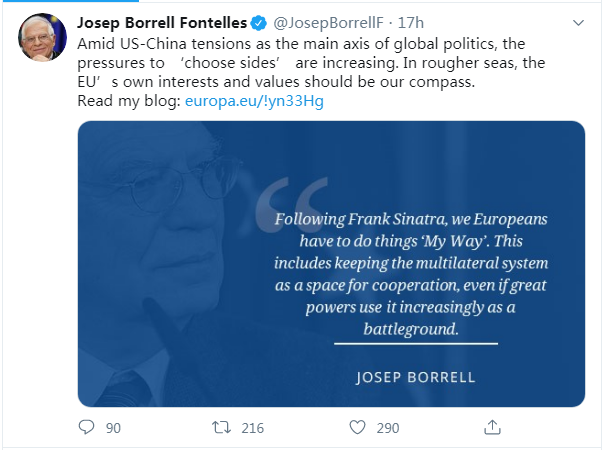 Screenshot of a tweet written by High Representative of the EU for Foreign Affairs and Security Policy Josep Borrell Fontelles.

Screenshot of a tweet written by High Representative of the EU for Foreign Affairs and Security Policy Josep Borrell Fontelles.

The White House has sought to exacerbate conflict with Europe by making aggressive one-sided demands on trade, NATO spending and conformation to other U.S. preferences, all of which have contributed to the declining opinions of the United States as an unreliable and volatile partner.

In doing so, there has been a growing consensus that what ought to theoretically constitute the "European interest" does not meet eye to eye with Washington.

Given this, the bloc is increasingly caught in the middle of the Trump administration's growing confrontation with China, in which it has sought to wage attacks in the fields of trade, technology and investment.

Although individual positions and sympathies of governments in the bloc differ regarding this issue, with some more sympathetic than others, nevertheless on the institutional level of European foreign policymaking whereby ministers collaborate, there is a consensus that whilst the bloc may have its own concerns, nevertheless it remains prudent that cooperation and good-faith ties with China remain in the interest of the continent as a whole.

Thus, as Trump's policies towards China have become more confrontational, Europe appears to have cast its lot and made a consensus that it will not take this path as a general rule.

Borrell's comments are indicative of that. Also, several weeks ago when the foreign ministers of the bloc discussed the matter of Hong Kong, they agreed that taking action against China was not an appropriate step to take and instead, matters such as the EU-China investment treaty were of paramount importance. The EU-China summit remains firmly on the agenda, whilst Angela Merkel's government as a leading player in the EU has also tilted towards Beijing and as pointed out previously, changed its position on unrest in Hong Kong.

Of course, there will still be differences and disagreements. But it is the principle in these comments that matters, the belief that engagement and collaboration with China have not failed, that Europe's interests can be salvaged and fought for by talking with Beijing rather than fighting with it, which paints a stark contrast to the zero-sum, aggressive and hysterical game against China being played in Washington that has rendered any positive policies with Beijing as a failure.

Whilst the U.S. is driven by dogma, Europe is driven by caution and pragmatism that ultimately places faith in diplomacy and multilateralism. The message to Pompeo is thus clear; EU nations will take their own path and secure their own position and if Washington is jumping into a new Cold War, they won't be following suit.