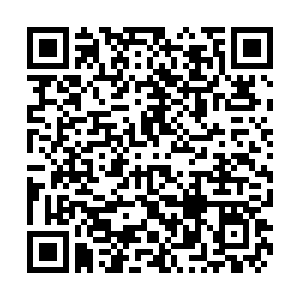 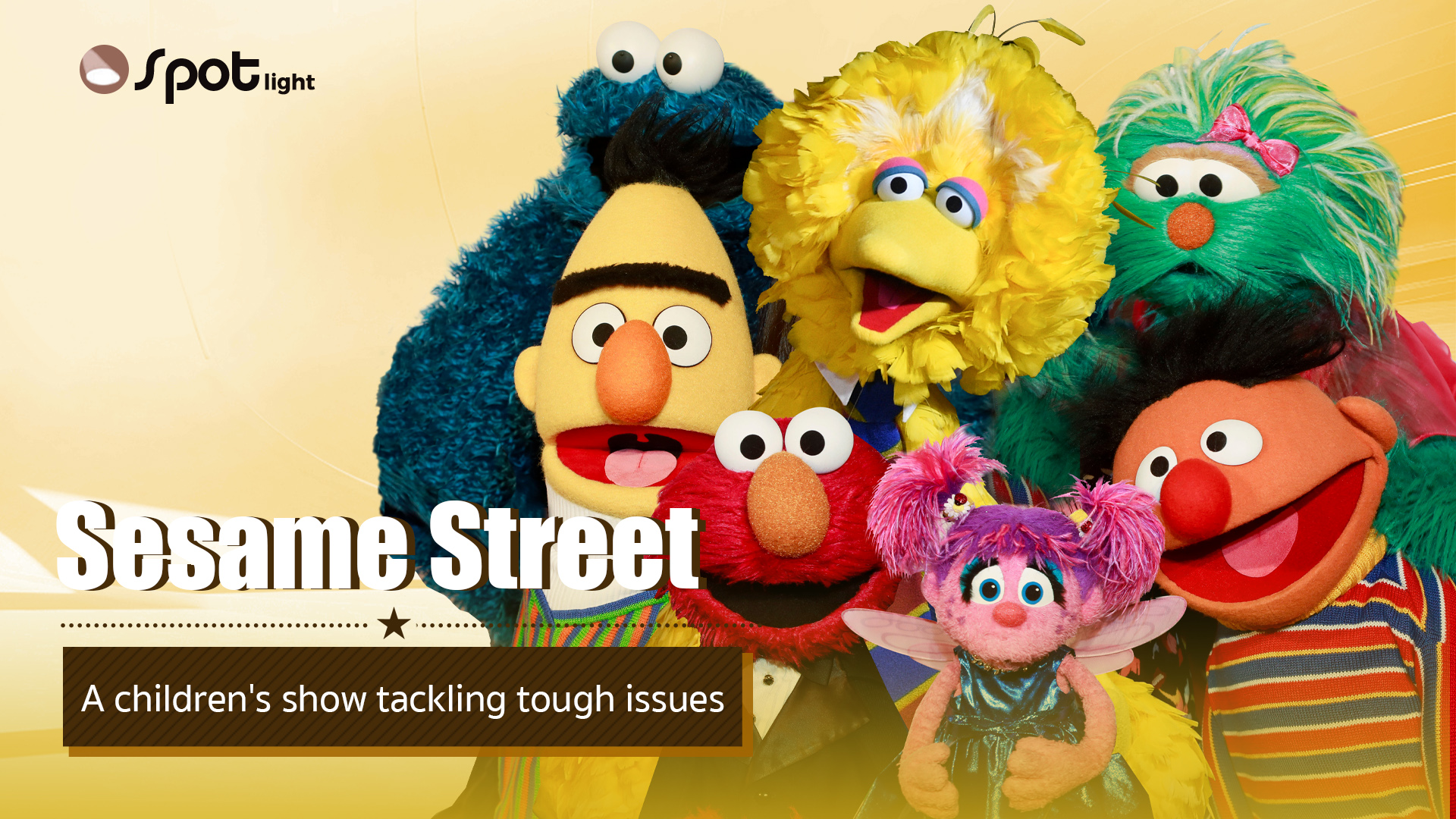 "Not all streets are like Sesame Street. On Sesame Street, we all love and respect one another. Across the country, people of color, especially in the black community, are being treated unfairly because of how they look, their culture, race and who they are. What we are seeing is people saying 'enough is enough'. They want to end racism."

These words by Louie, a red furry monster on beloved U.S. children's show Sesame Street, drew an outraged response last week from Fox News anchor Tucker Carlson, who slammed it as a message to children that "America is a very bad place and it's your fault."

The sight of a high-profile news anchor picking a fight with a puppet was unusual, but the incident demonstrated the presence that Sesame Street has had in current affairs of late.

As COVID-19 wreaked havoc worldwide, upending people's lives, the show's parent company Sesame Workshop launched in March a new "Caring for Each Other" initiative with online resources to help parents and kids cope with the new reality of home schooling and social distancing.

It also partnered with CNN to produce two televised "town halls" bringing together top medical experts and school officials to answer questions from children and parents about COVID-19 and provide reassurance.

After U.S. cities exploded in anger over the killing by police of yet another black man, George Floyd, the Sesame Street/CNN town hall format was used to address systemic racism and help explain to little ones, as well as grown-ups, what was going on.

This show included the segment that sparked Carlson's fury.

For over 50 years, Sesame Street has been educating children and tackling tough issues with the help of its friendly monsters and their human friends. 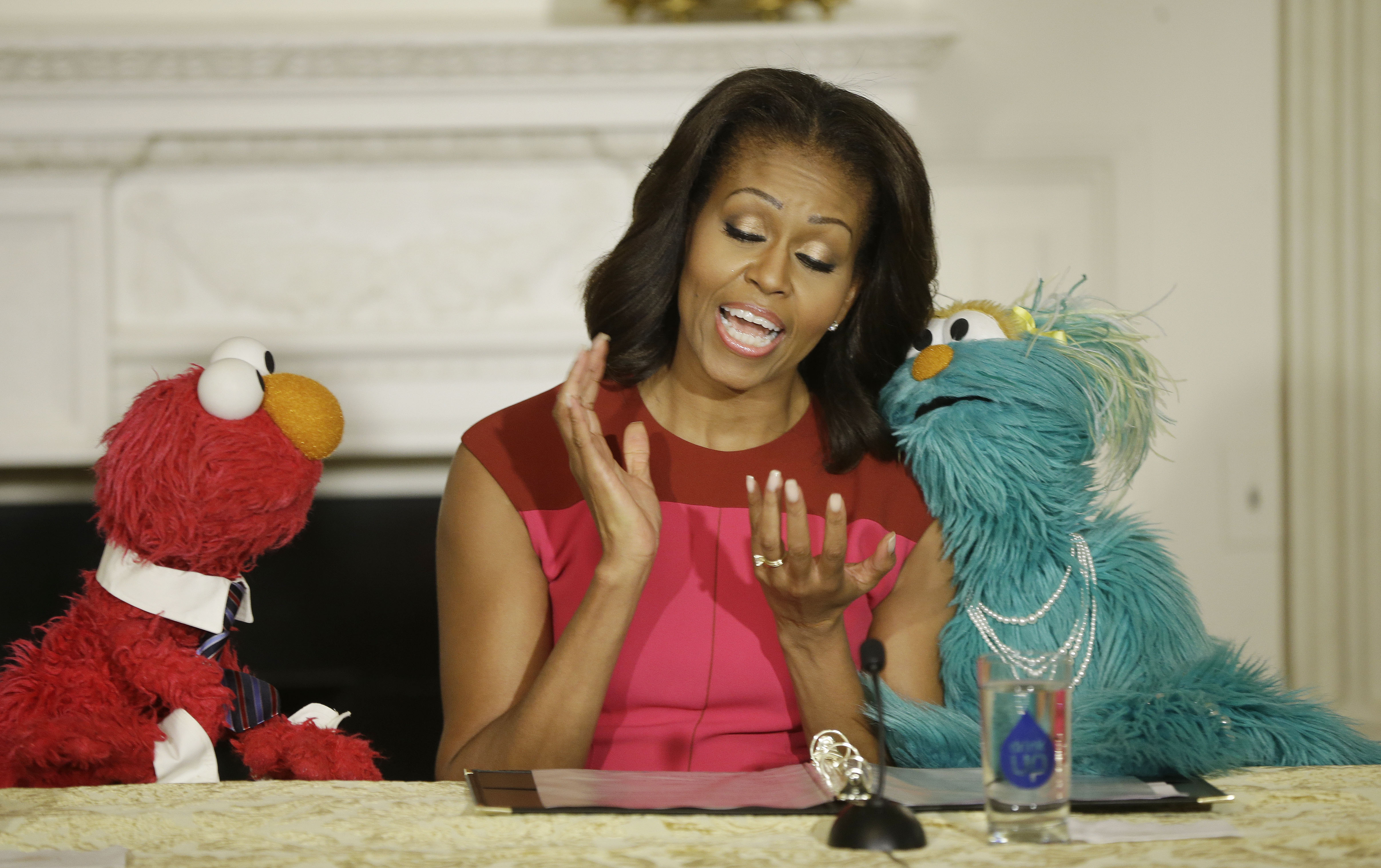 The show was the brainchild of Lloyd Morrisett, an experimental psychologist, and Joan Ganz Cooney, a TV producer, who set up what was then known as the Children's Television Workshop in 1968, and a year later, Sesame Street debuted with a multi-ethnic and colorful cast, quickly gathering a following from children and parents alike.

Big Bird, Elmo, Cookie Monster, Oscar the Grouch, Grover, Count Von Count, and Bert and Ernie – all created by Jim Henson, the man behind The Muppets – have since captured the hearts of generations of children the world over.

The show has also welcomed some of the biggest names as guest stars to The Neighborhood, from Beyoncé and Pharrell Williams to David Beckham, Michelle Obama, astronaut Buzz Aldrin, renowned cellist Yo-Yo Ma and even former UN Secretary-General Kofi Annan.

But besides singalongs and fun games to learn ABCs and 123s, Sesame Street also grappled early on with serious "grown-up" issues.

The real-life death in 1983 of the actor playing Neighborhood shopkeeper Mr. Hooper was used to discuss loss and how to cope with it. Special segments aired after the 9/11 terror attacks and Hurricane Katrina to help children deal with tragedy and disaster.

The show has not shied away from discussing racism, bullying, drug addiction or incarceration alongside regular themes such as friendship, understanding, empathy and respect – always remembering who its audience is, speaking to children at their level, and addressing their hopes and worries.

In 2017, Sesame Street introduced a new character, Julia, a Muppet with autism. Lily, another child Muppet, is homeless and food insecure. In the 1980s, Aristotle, a blind Muppet, helped to discuss disability. Rosita, a Muppet from Mexico, caters to English- and Spanish-speakers. 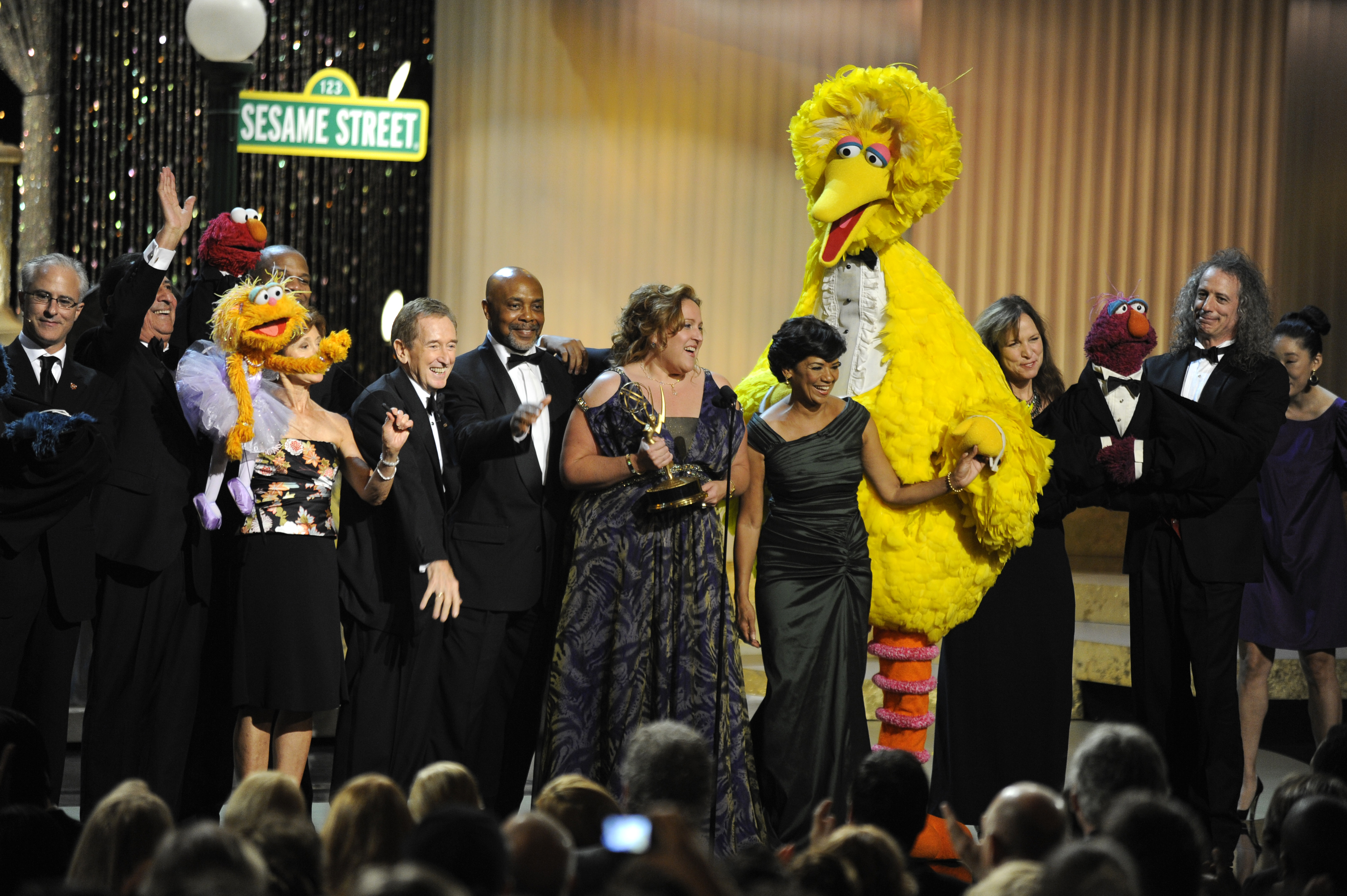 Remaining fresh and up-to-date has ensured Sesame Street's staying power half a century on, and it boasts more Emmy Awards than any other television show.

The cute furry and feathery monsters have also proven to have universal appeal.

In those countries too, the show has helped to address difficult issues: South Africa's Takalani Sesame featured an HIV-positive Muppet, Kami; productions in Northern Ireland and Kosovo spoke of reconciliation and tolerance; and an Israeli-Palestinian version even tackled peace and coexistence in the Middle East.

In Afghanistan, Baghch-e-Simsim has introduced a girl Muppet, Zari, to talk about gender equality. Ahlan Simsim, a new Arabic-language production that launched this year, features Jad, a displaced Muppet, to speak directly to child refugees.

With COVID-19 spreading around the globe this year, families were confronted with a new situation where they could not leave their homes, could not see friends and relatives and had to take extra precautions to avoid falling sick.

Sesame Street's "Caring for Each Other" initiative was set up to address these new challenges, with videos, learning activities, ideas for virtual playdates and tips on how to stay healthy and spend time with family, made available online. 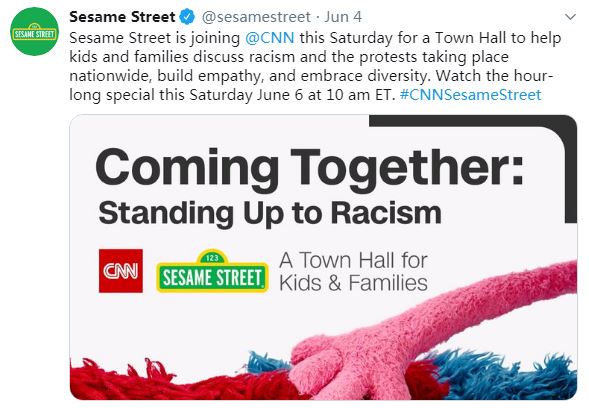 The Sesame Street/CNN town halls – the most recent of which aired over the weekend – expanded on this idea to provide a space where children and parents could ask questions about the novel coronavirus. These ranged from the basic ("What is COVID-19?") to the more complex ("When can I see my friends?", "How much screen time should I allow my children?") and the downright imaginative ("Can COVID-19 exist in space?").

As mass protests after the death of George Floyd launched a national discourse about racism, Sesame Street and CNN took this on as well, helped by furry monsters and top officials like Atlanta Mayor Keisha Lance Bottoms.

But while grown-up conversations have revolved around chokehold bans, antifa and "Defund the police", children's concerns were more fundamental: "Sill a police officer hurt me?" "What do I say to somebody who calls me names?" and "Why do people have different skin colors?" A six-year-old aspiring neurosurgeon earnestly inquired whether it was possible to operate on racists' brains to change them.

One of Sesame Street's trademarks has always been its willingness to deal with "big feelings", encouraging children to talk about their emotions and express if they are sad, scared or frustrated. 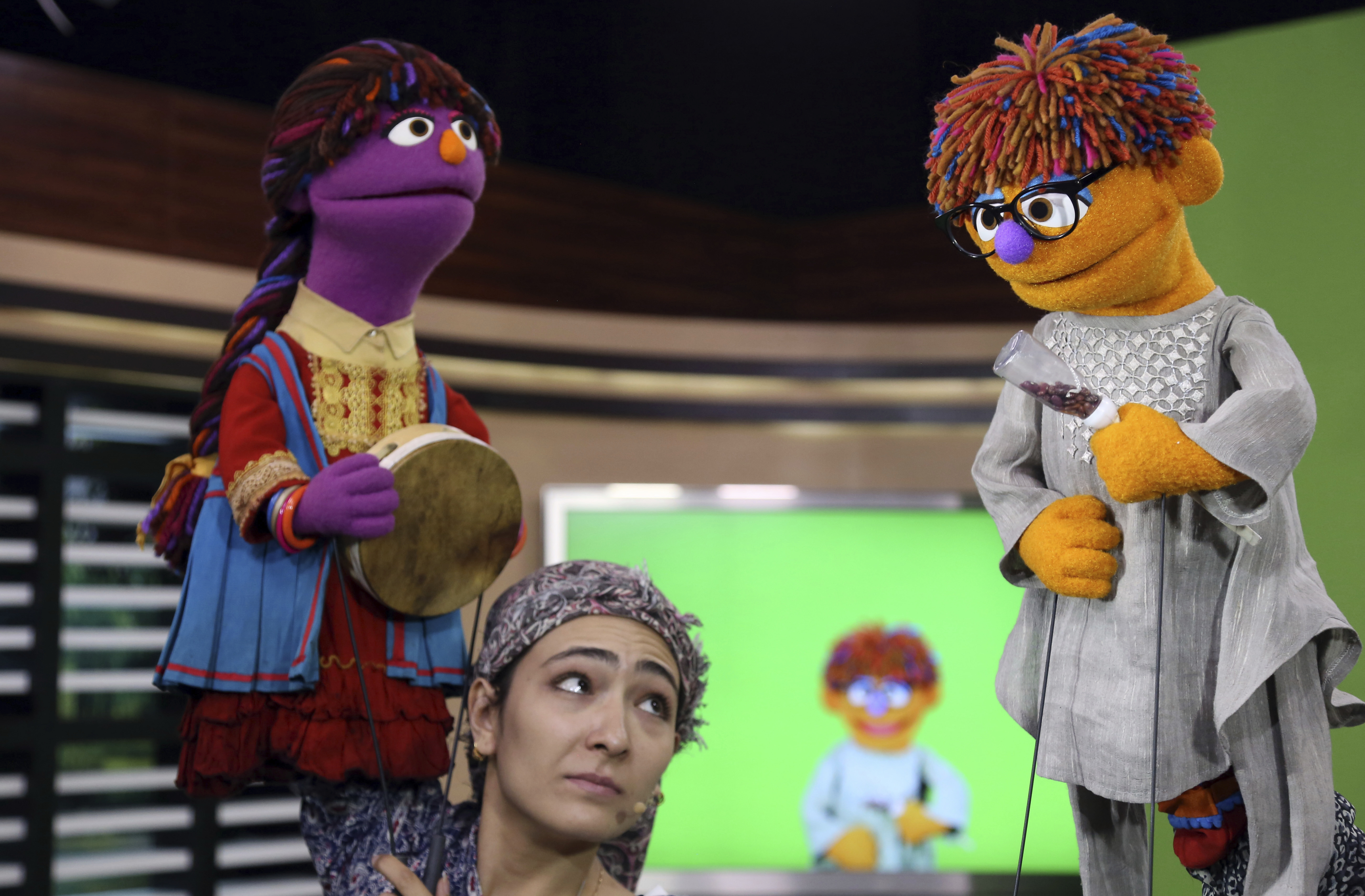 "First we had to describe a pandemic, and now we have to talk about racism. So now is the opportunity to really talk and have honest, simple but yet realistic conversations."

On the subject of racism, "We know that we need to start early. We know that young children, even in infancy, start to recognize the difference between race and identity. So this is an opportunity to talk about those similarities and differences … to take advantage of the diversity that surrounds you."

"To have these conversations early on … sets a foundation but it lasts for a lifetime of awareness," she added.

Fifty years on, Sesame Street's message of acceptance, inclusion, diversity and kindness continues to resonate, even as it takes on the latest crises and challenges of the day.

Alan, one of Sesame Street's human residents, summarized it in one of the CNN town halls: "It doesn't matter what you look like, the color of your skin, the language that you speak, or if you are a person, a monster, a Big Bird or a Snuffleupagus: All of us need to help and care for each other."