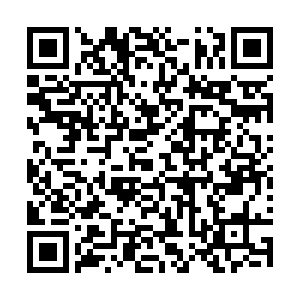 U.S. Secretary of State Mike Pompeo announced Wednesday that the U.S. will begin a sustained campaign of sanctions against Syria under the Caesar Act.

The move authorizes severe economic sanctions to hold Syrian President Bashar al-Assad's government and others "accountable for their brutal acts against the Syrian people," Pompeo wrote on Twitter. 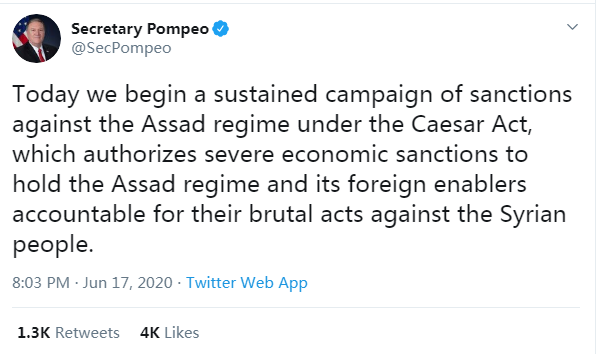 "Many more sanctions will come until Assad and his regime stop their needless, brutal war and agree to a political solution as called for by UNSCR 2254," he added.

The sanctions will be put on 39 individuals and entities including Syrian President Bashar Al-Assad and his wife Asma.

U.S. Ambassador to the UN Kelly Craft told the Security Council on Tuesday that Washington would implement the measures to "prevent the Assad regime from securing a military victory."

"Our aim is to deprive the Assad regime of the revenue and the support it has used to commit the large-scale atrocities and human rights violations that prevent a political resolution and severely diminish the prospects for peace," Craft said.

Addressing a separate meeting of the Geneva-based UN Human Rights Council on Tuesday, Syria's UN Ambassador Bashar Ja'afari accused Washington of trying to impose U.S. law on the world and called for it to end unilateral sanctions.

China's permanent representative to the United Nations Zhang Jun also opposed more sanctions on Syria, saying that "as vulnerable countries like Syria are struggling with the (coronavirus) pandemic, imposing more sanctions is simply inhumane and may cause additional catastrophes". 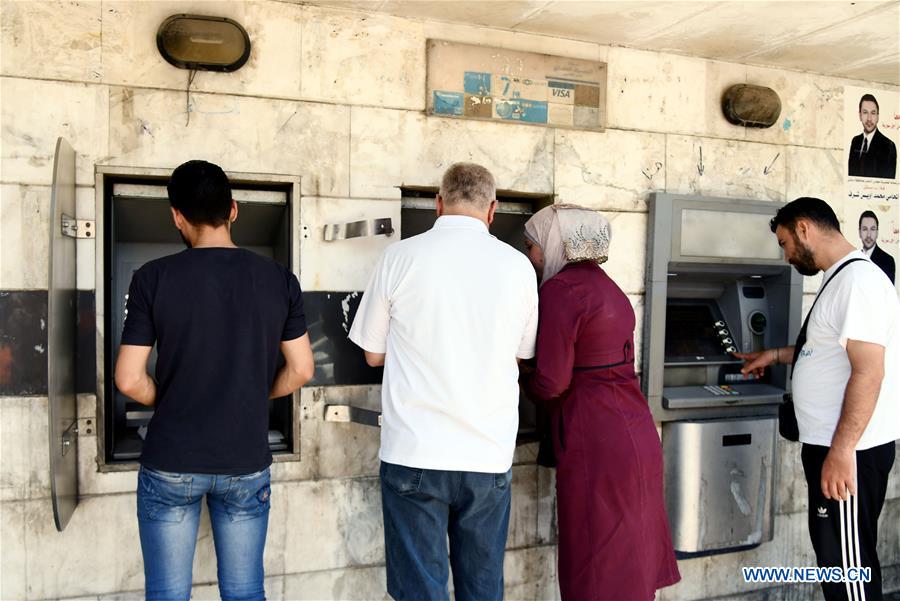 Syrians use ATMs in Damascus, capital of Syria, on June 7, 2020. Syrians have been complaining about the skyrocketing prices amid a tough economic situation. /Xinhua

Syrians use ATMs in Damascus, capital of Syria, on June 7, 2020. Syrians have been complaining about the skyrocketing prices amid a tough economic situation. /Xinhua

The Caesar Syria Civilian Protection Act, also known as the Caesar Act, was signed by President Donald Trump in December last year as a part of the National Defense Authorization Act for Fiscal Year 2020.

The act authorizes additional sanctions and financial restrictions on institutions and individuals doing business with the Syrian government.

It was named after the pseudonym used by a Syrian military officer who leaked more than 50,000 photos documenting torture and other human rights violations and atrocities in al-Assad's prisons as media reported.

From Wednesday, the act will target supporters of the al-Assad government in politics, business and banking, reaching all the way to Lebanon's Hezbollah and partners in Iran, Russia and even Gulf states and Europe, with individuals potentially facing travel bans or even arrest.

Earlier in June, the Syrian foreign ministry said the United States is practicing "economic terrorism" against Syria, noting the Caesar sanctions are based on a bunch of lies and fabricated claims.

The Syrians will exert efforts to protect the national economy of Syria and minimize the impact of the additional U.S. sanctions, the ministry said in a statement.

Experts agreed the new sanctions will have a huge chilling effect, even though many are uncertain how they will be imposed.