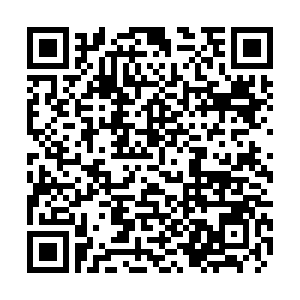 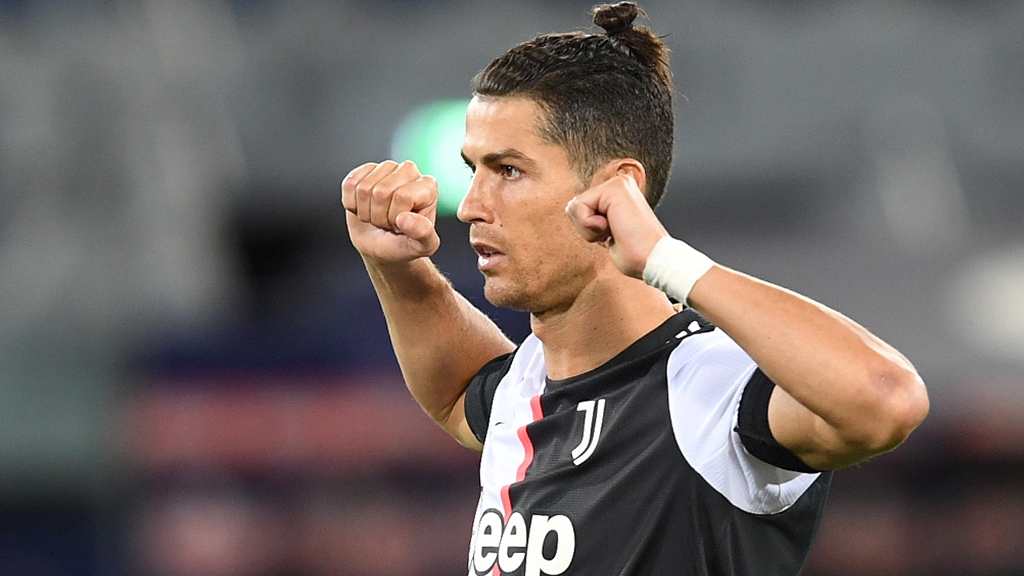 Juventus forward Cristiano Ronaldo celebrates during their Serie A clash with Bologna at the Renato-Dall'Ara stadium, Italy, June 22, 2020. /VCG

Juventus forward Cristiano Ronaldo celebrates during their Serie A clash with Bologna at the Renato-Dall'Ara stadium, Italy, June 22, 2020. /VCG

Cristiano Ronaldo converted a first-half penalty as Serie A leaders Juventus resumed their campaign with a 2-0 win at Bologna on Monday, lifting some of the pressure off coach Maurizio Sarri.

After missing a spot kick in a Coppa Italia match against AC Milan 10 days ago, Ronaldo made no mistake in the 23rd minute and Paulo Dybala curled in a brilliant second before halftime to give the Turin side a comfortable win.

Juventus, with 66 points from 27 games and chasing a ninth successive title, extended their lead to four points over Lazio, who visit Atalanta on Wednesday. Bologna are 10th.

Juve's failure to score in two Coppa Italia games following the end of the new coronavirus stoppage, coupled with their defeat on penalties to Napoli in Wednesday's final, raised questions over Sarri, who has struggled to impose his style of play in his first season at the club.

There were no questions about the Juventus defense, however, which kept a fourth straight clean sheet in all competitions.

The only disappointment for Juve was an injury to defender Mattia De Sciglio and a red card for his replacement Danilo after he was booked twice in quick succession near the end. 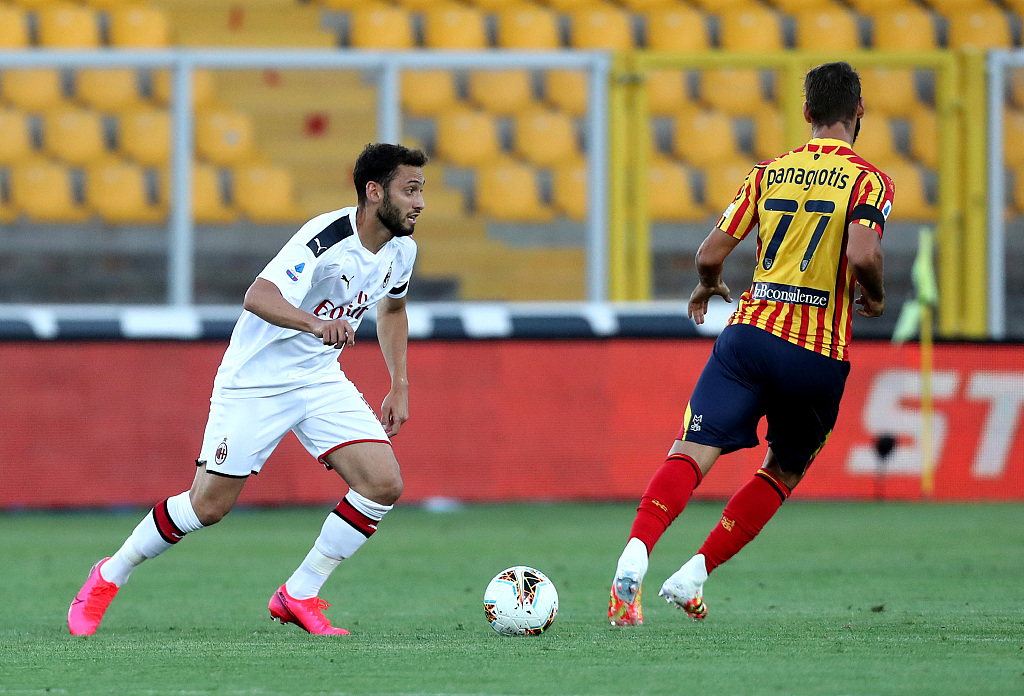 AC Milan's Hakan Calhanoglu in action during their Serie A clash with Lecce at Stadio Via del Mare, Italy, June 22, 2020. /VCG

AC Milan's Hakan Calhanoglu in action during their Serie A clash with Lecce at Stadio Via del Mare, Italy, June 22, 2020. /VCG

Meanwhile, AC Milan kept alive their hopes of snatching a Europa League qualifying berth after Turkey midfielder Hakan Calhanoglu had a hand in all of their goals in a 4-1 Serie A win at relegation-threatened Lecce.

The result lifted Milan, who were missing forward Zlatan Ibrahimovic with a calf injury, two places to seventh on 39 points from 27 games. Sixth-placed Napoli are ahead of them on goal difference. Lecce stayed 18th on 25 points as they failed to climb out of the drop zone.

The result leaves second-placed City 20 points behind runaway league leaders Liverpool with eight games remaining and Jurgen Klopp's side cannot now clinch the title with a victory against Crystal Palace at Anfield on Wednesday.

If City win at Chelsea on Thursday then Liverpool could secure their first league crown in 30 years against Pep Guardiola's side in Manchester on July 2.