U.S. CDC director: COVID-19 has 'brought this nation to its knees'
CGTN 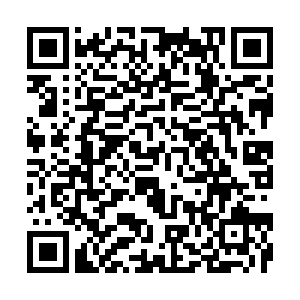 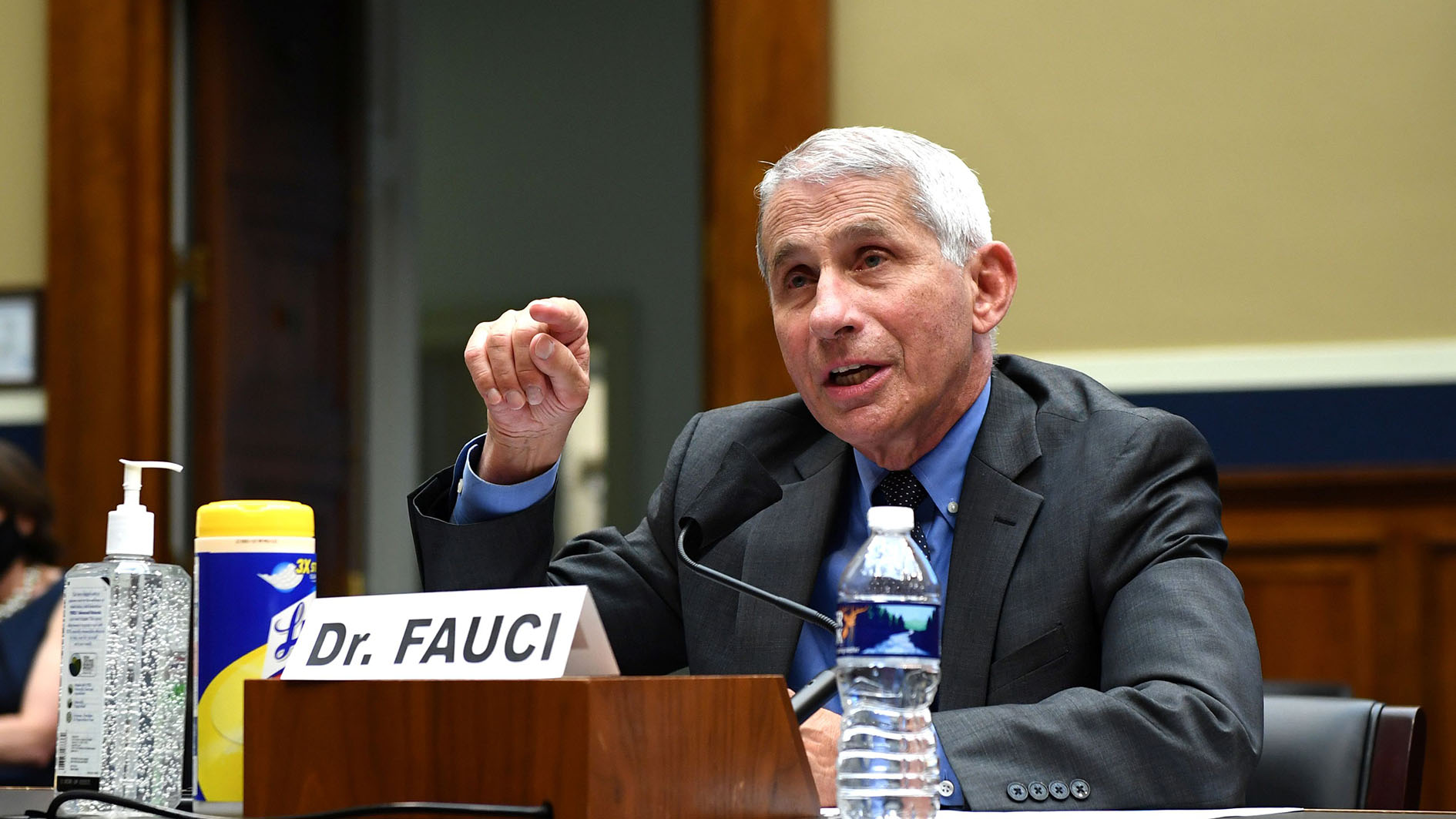 COVID-19 has "brought this nation to its knees," Dr. Robert Redfield, director of the U.S. Centers for Disease Control and Prevention (CDC), said on Tuesday, testifying in front of a House committee along with Dr. Anthony Fauci, the government's top infectious disease expert.

The "one little virus" is probably going to cost the country seven trillion U.S. dollars, and the next few weeks will be critical to tamping down coronavirus hotspots around the country.

On the bright side, a COVID-19 vaccine could be available later this year or early in 2021, said Dr. Fauci.

Fauci and other top health officials also said they have not been asked to slow down testing for coronavirus, a controversial issue after President Donald Trump said last weekend he had asked them to do just that because it was uncovering too many infections.

"We will be doing more testing," Fauci told the House committee.

Who to believe? Health officials or the Trump administration?

Since Fauci's last appearance at a high-profile hearing more than a month ago, the United States is emerging from weeks of stay-at-home orders and business shutdowns. 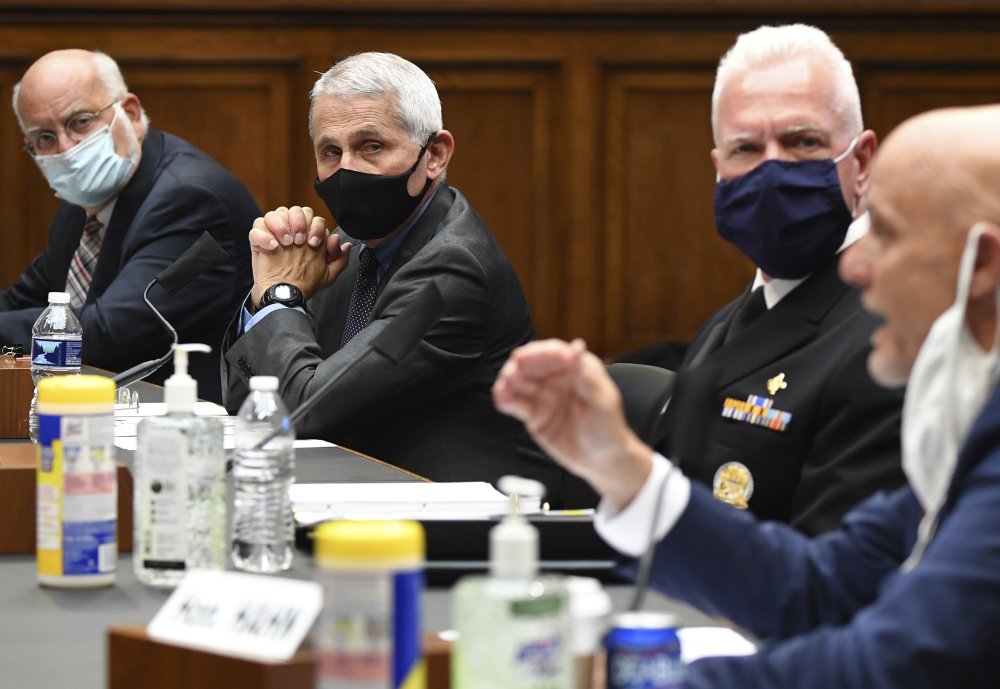 From left, Dr. Robert Redfield, director of the Centers for Disease Control and Prevention, Dr. Fauci, and Adm. Brett Giroir, head of the U.S. Public Health Service, listen as Food and Drug Administration Commissioner Dr. Stephen Hahn testifies before a House Committee on Energy and Commerce on the Trump administration's response to the COVID-19 pandemic on Capitol Hill in Washington, DC, June 23, 2020. /AP

From left, Dr. Robert Redfield, director of the Centers for Disease Control and Prevention, Dr. Fauci, and Adm. Brett Giroir, head of the U.S. Public Health Service, listen as Food and Drug Administration Commissioner Dr. Stephen Hahn testifies before a House Committee on Energy and Commerce on the Trump administration's response to the COVID-19 pandemic on Capitol Hill in Washington, DC, June 23, 2020. /AP

Dr. Richard Besser, former acting director of the U.S. CDC warned during the testimony that no state has effectively transitioned from stay-at-home orders "to a public health model of testing, tracking, isolating and quarantining."

However, the governors of Arizona, Florida and Texas have been bullish on reopening its economy, which has seen worrisome increase in the cases.

According to the data from the COVID Tracking Project, 25 U.S. states reported more new cases last week than the previous week, including 10 states that saw weekly new infections rise more than 50 percent, and 12 states that posted new records.

Texas reported one of the largest rises in new cases at 24,000 for the week ending on June 21, an increase of 84 percent from the previous week.

Arizona reported 17,000 new cases, a 90-percent increase, with 20 percent of tests coming back positive, according to the analysis.

The governors of all three states have attributed the increases in new cases to more testing, echoes the President Trump's explanation. But the health experts said, "This is not an artifact of just more testing at all."

"In many states, the testing is increasing, but the percentage of those people who are positive is actually going much higher," said Michael Osterholm, director of the Center for Infectious Disease Research & Policy at the University of Minnesota.

Even with the increased testing, the country is still "way behind the virus," former U.S. Health and Human Services Secretary Kathleen Sebelius said. "We are still reacting. We're not ahead of it."

If the U.S. doesn't get control of the coronavirus pandemic by fall, "you're essentially chasing after a forest fire," Dr. Anthony Fauci told the House committee.

More 2.3 million in the U.S. have been infected in the pandemic, including 121,217 deaths, according to data from Johns Hopkins University.

Though people can become increasingly numb about the huge number, some EU countries have expressed concerns over opening their borders to U.S. citizens as they cast doubt over President Trump's crisis management.

European countries are easing border restrictions and planning to open up to tourists from third nations. Those plans, however, do not include U.S. citizens due to the country's handling of the pandemic, The New York Times reported on Tuesday, citing draft lists of acceptable travelers.

The U.S., which has the most COVID-19 cases in the world, is seeing a new spike in infections. According to the proposal, U.S. travelers would be grouped in with those from Brazil and Russia, who rank second and third globally in terms of the number of infections, and would not be allowed to visit the EU member states.