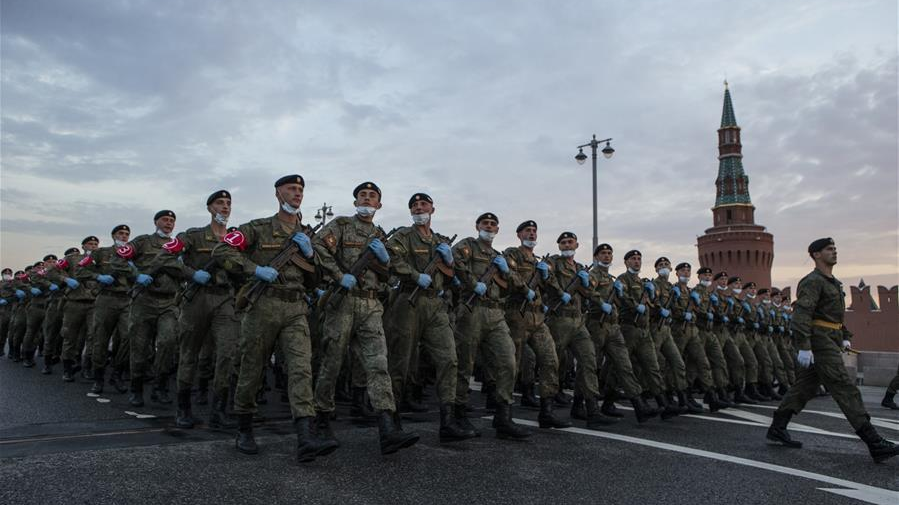 Russian soldiers wearing face masks and gloves walk to the Red Square before the rehearsals for the Victory Day military parade in Moscow, Russia, June 18, 2020. /Xinhua

Russian soldiers wearing face masks and gloves walk to the Red Square before the rehearsals for the Victory Day military parade in Moscow, Russia, June 18, 2020. /Xinhua

According to the RIA Novosti, in the beginning of June, Russian Defense Minister Sergei Shoigu invited his U.S. counterpart Mark Esper to participate in the military parade in Red Square in honor of the 75th anniversary of Russia's victory in World War II in Moscow on June 24.

Previously, both George W. Bush and Barack Obama accepted the Russian invitation and attended the military parade when they were U.S. presidents.

However, the invitation sent by Russia has attracted much attention due to some recent delicate events in the relations between Russia and the United States.

Second, recently the U.S. has frequently released signals of easing relations with Russia. The U.S. first invited Russian President Vladimir Putin to attend the expanded G7 meeting, and then donated 150 ventilators to Russia to help the country fight the pandemic.

In the above context, Russia's seemingly "routine" invitation seems to have unusual considerations.

First is to ease the relations with the United States. Although the successive easing measures of the U.S. are subjectively to avoid two-line war and concentrate on containing China, it is conducive to easing the relationship between the U.S. and Russia. From an economic perspective, Russia, which has been suffering from economic sanctions and the pandemic, is urgently trying to find an effective way to revive its economy.

Second is to fight back against the U.S.' distortion of the historical facts of World War II. Winning the Great Patriotic War and making a decisive contribution to the victory of mankind over fascism has always been one of the most important spiritual wealth of the Soviet Union and today's Russia, and a spirit to unite people in difficult times. The international community also identified with the decisive contribution of the Soviet Union to the victory of World War II.

Looking back, whether in the period of the sharp opposition between the U.S. and the Soviet Union or after the Cold War, the U.S. has not attacked Russia on the issue of World War II history, no matter what kind of policy it adopted for Russia.

On the contrary, Trump took the lead to ignore the historical facts this year, followed by several U.S. senior officials, denying the Soviet Union's contributions to the victory of World War.

On June 19, Putin wrote an article to refute the historical revisionist tendency of Western countries.

Third, it is cautious to see the relationship between the U.S. and its allies get sorer.

As some politicians from Western countries have also been invited by Russia, if some of them join in the parade and others don't, the troubled relationship caused by the pandemic between the U.S. and its allies may worsen.

Russia's invitation is both an opportunity and a challenge for Trump. 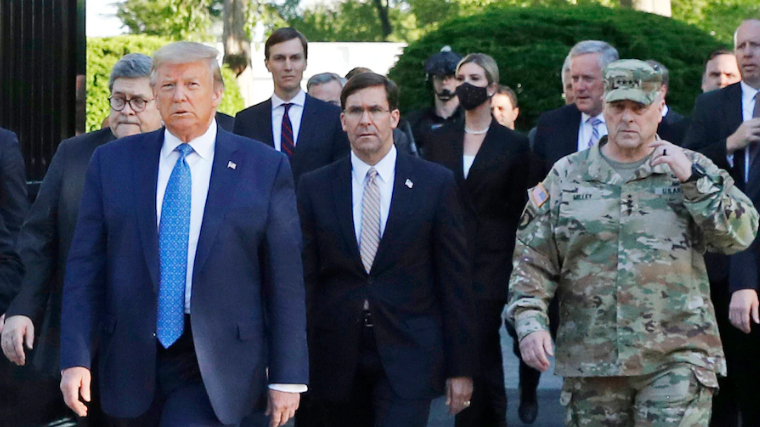 If the relationship between them improves before the election at the end of the year, even if the improvement is only symbolic, it could be seen as one of Trump's foreign policy achievements.

Second, Trump personally favors military parades. He praised the French military parade and held military parade on the Independence Day in the United States. From this point of view, Trump would have participated in the Moscow military parade in person if he had not been affected by the pandemic domestically and the protests caused by the death of George Floyd.

Of course, the U.S.' attitude in the Russian military parade will not have a substantial impact on the relationship between the United States and Russia. This is because the structural contradictions between the U.S. and Russia have not changed.

Since the end of World War II, the U.S. has never given up its attempt to weaken or even disintegrate Russia, be it through containment or mitigation.

Whether Trump is re-elected or not, relations between the United States and Russia will not be fundamentally improved. What's more, the U.S. is now easing relations with Russia in a bid to alienate China. However, Russia will not fall into this strategic trap.

The U.S.-Russian relationship will not get smooth as they have mistrust in strategic interests. In fact, shortly after Shoigu's invitation to Esper, military aircraft between the two countries clashed several times near the airspace of the two countries and NATO has continued to hold joint military exercises in the Baltic Sea which is near Russia.