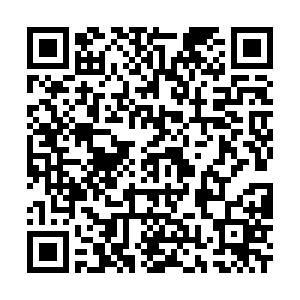 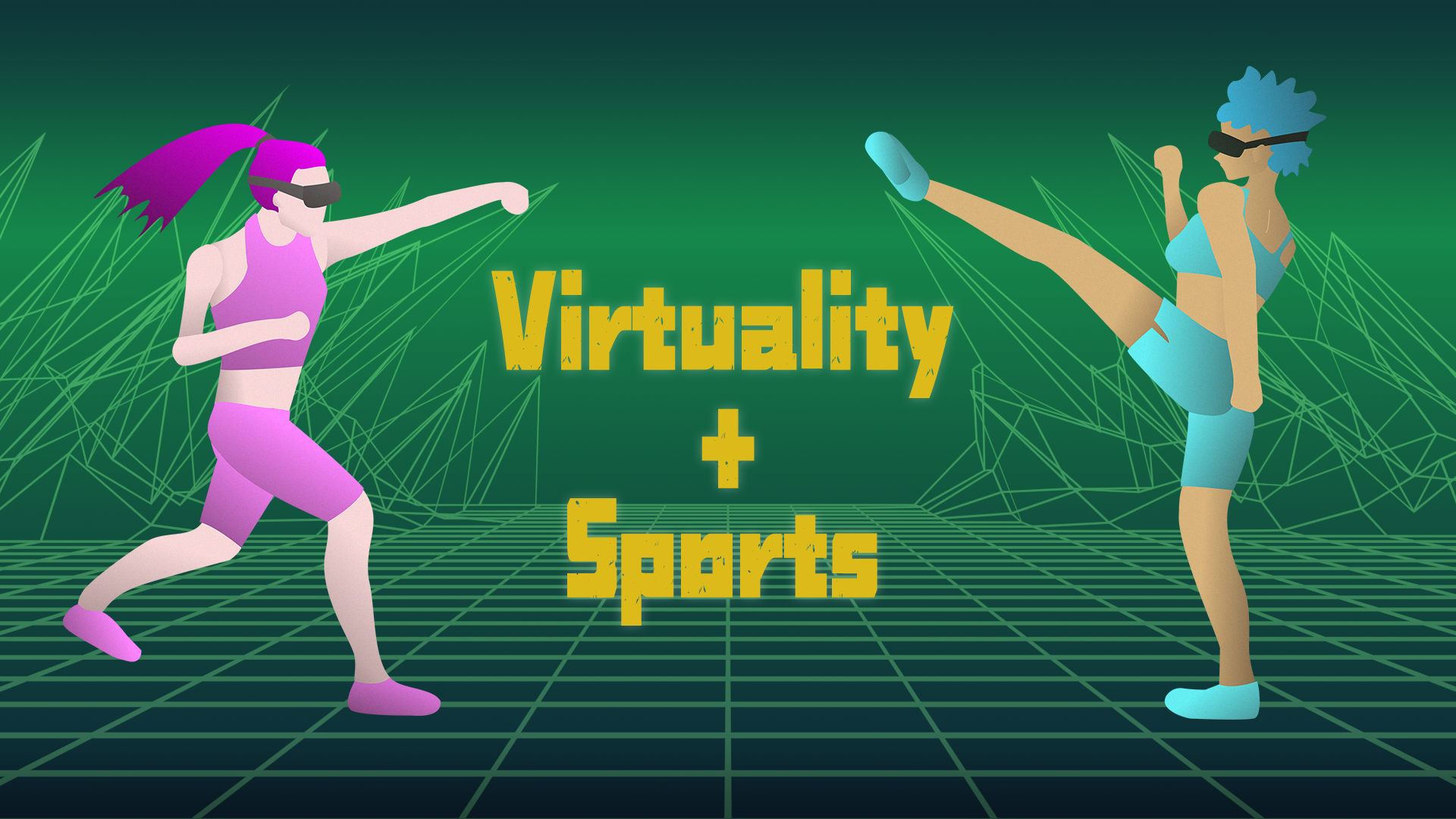 After a shutdown of exactly five months due to the outbreak of COVID-19, the Chinese Basketball Association (CBA) restarted on the afternoon of June 20. But, like most of the other recently rebooted professional sports leagues in the world, there was no audience at the venue – even the cheerleaders could only perform via an LED screen beside the court.

Around two million messages were left by the audience on the Tencent Sports app during their livestream of the game between the Nanjing Monkey Kings and Zhejiang Lions showing people were excited for the return of basketball, but the two on-site commentators still had to ask each other "do you feel excited?" and try to create a positive vibe in the otherwise silent arena.

On one hand, playing games behind closed doors is disappointing for fans who wanted to see the game live in the area, but on the other, the situation has led to the CBA regularly broadcasting their games in virtual reality (VR) – like what the NBA has been doing since 2014 – giving the home audience an immersive experience.

By cooperating with China Mobile's Migu Video, the CBA lets the audience watch game live in VR, either on their smartphones or with a special headset, from different angles provided by 16 camera stands. The technology also allows fans to show their broadcast themselves in real-time on courtside screens. 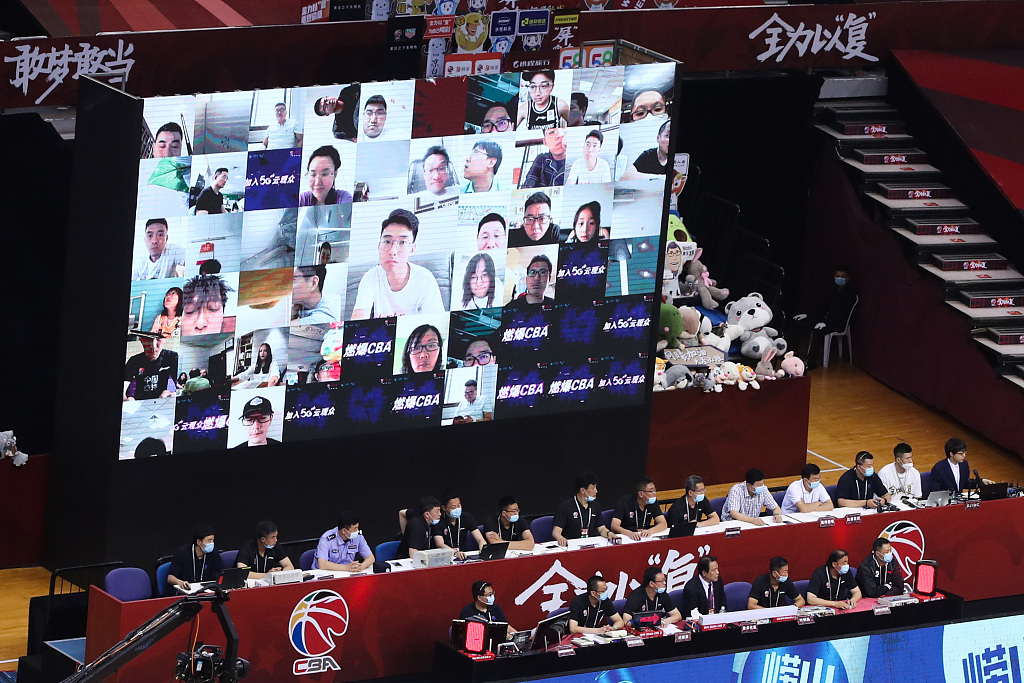 Fans' real-time images are projected on the screen beside the court during the CBA match between Nanjing Monkey Kings and Zhejiang Lions at the Qingdao Guosen Gymnasium, Qingdao, Shandong, east China, June 20, 2020. /VCG

Fans' real-time images are projected on the screen beside the court during the CBA match between Nanjing Monkey Kings and Zhejiang Lions at the Qingdao Guosen Gymnasium, Qingdao, Shandong, east China, June 20, 2020. /VCG

At the moment, it is easy for a league to broadcast live games in VR, but the penetration of VR devices in the target audiences is still low around the world due to reasons such as the high expense and often inconvenient user experience.

Nevertheless, if holding live events behind closed doors becomes a common practice in the post-pandemic age – a period which may last for a relatively long time – will the large-scale application of 5G technology and the live streaming industry's boom on digital platforms combine to make virtual viewing a major component of modern sports?

During the pandemic, the world's major professional sports leagues had to pause, and so sports TV channels could only broadcast old games and events. Because of this, livestreams of eSport equivalents became a realistic alternative for fans.

Because sports evolved from games, many video games can simulate real sports to a high degree, and some of them also have eSports leagues, like EA Sports' FIFA series, which is a yearly must-buy for a lot of gamers. 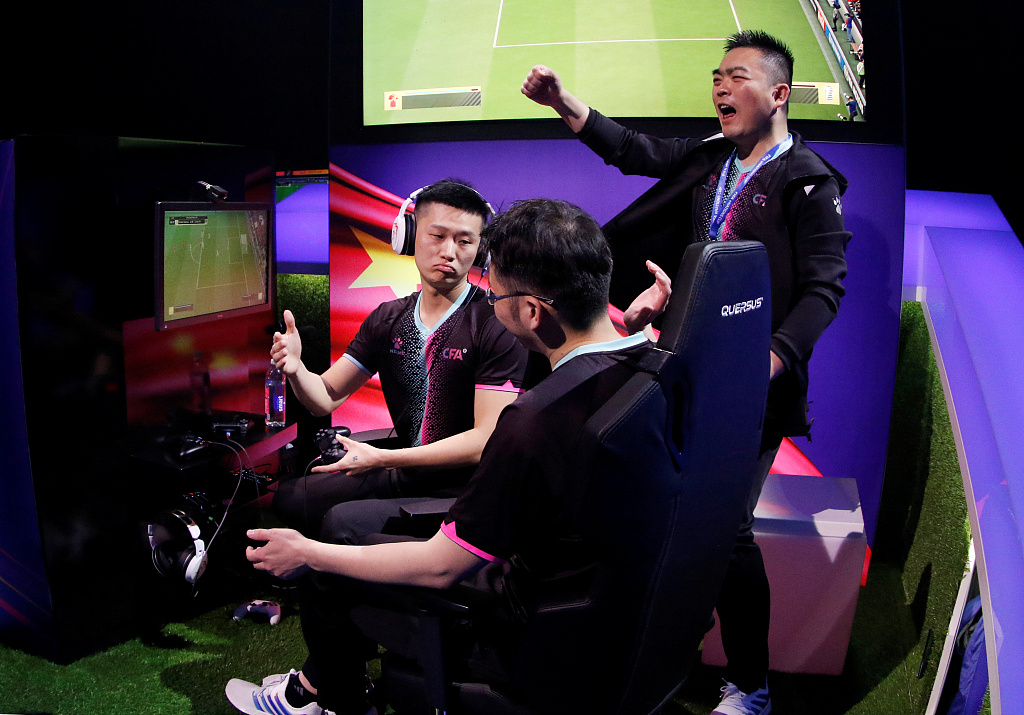 In fact, some of the more expensive sports, have already been using simulators for a long while. Formula One (F1) is a major example of this, and as racing – in terms of both simulation and arcade styles – is a major genre of video games, F1 games are easily accepted by diehard fans and a wider audience too.

F1 Virtual Grand Prix launched an official global league in 2017 and, during the pandemic, many F1 racers joined to stay busy but also keep their skills sharp. And by competing online, many developed closer bonds with their fans.

According to an article released by the Ministry of Sports on June 22, F1 Virtual Grand Prix eSports series eclipsed 30 million views on TV and digital platforms combined during the COVID-19 lockdown.

The number evidently cannot compete with the trillions of cumulative viewers for the real F1 Grand Prix series in 2019, but it's still a significant result for eSports. 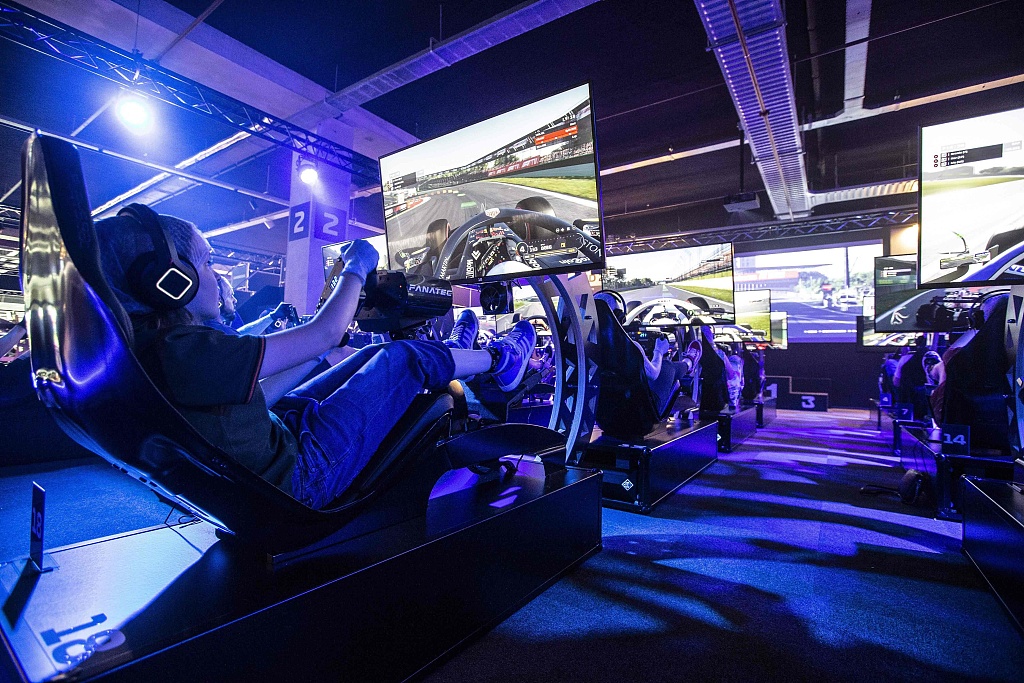 People play in a racing simulator at the opening of the first Official F1 Racing Center in Utrecht, Netherlands, June 1, 2020. /VCG

People play in a racing simulator at the opening of the first Official F1 Racing Center in Utrecht, Netherlands, June 1, 2020. /VCG

Basketball game NBA 2K got a peak number of around 14,000 simultaneous viewers in a live competition which was held with real NBA stars on March 31. FIBA used this as the basis for setting up the international FIBA eSports Open 2020 which was held for the first time ever from June 19 to 21.

While it is true that it is becoming more popular for professional leagues to move their offline contests online, when sports lose their physicality, to a large extent, they also lose their essence.

Most sports events and exercises must be played with specific equipment, and currently, more and more fitness equipment, whether found in professional gyms or at home, can be combined with video games, like some treadmill and spinning bikes that connect with screens and turn users' workout data into virtual scenes.

To get in on the trend, some video game developers are also creating motion sensing peripherals to push their players into getting physical.

To give a recent example, Nintendo's Ring Fit Adventure on the Switch platform has become a smash hit during the pandemic, as people can use its ring-shaped peripheral to play a game and keep fit at the same time. 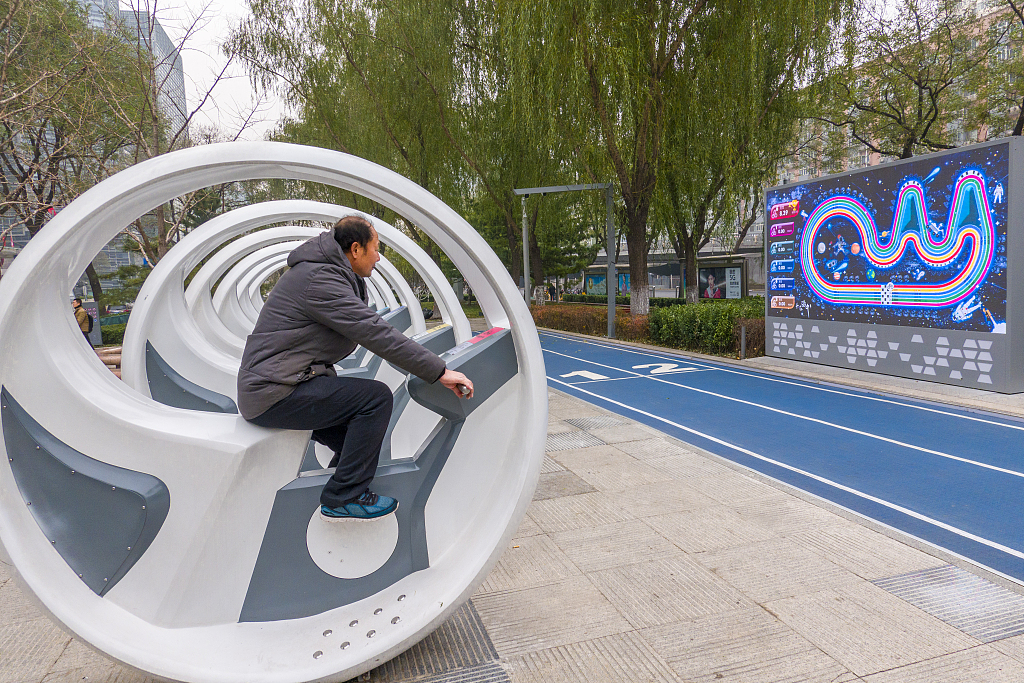 Combining exercise with video games dates back to expensive American gyms in the 1980s. But now, motion sensing apps for yoga, dancing, running, cycling and other solo exercises are very common worldwide.

However, on an industry-wide level, as sports are all about being "Faster, Higher, Stronger" and differ from exercise by being based in competition and confrontation, to create authentic experiences, sports game developers should consider creating products that allow people to do head-to-head or team sports in small, isolated spaces. 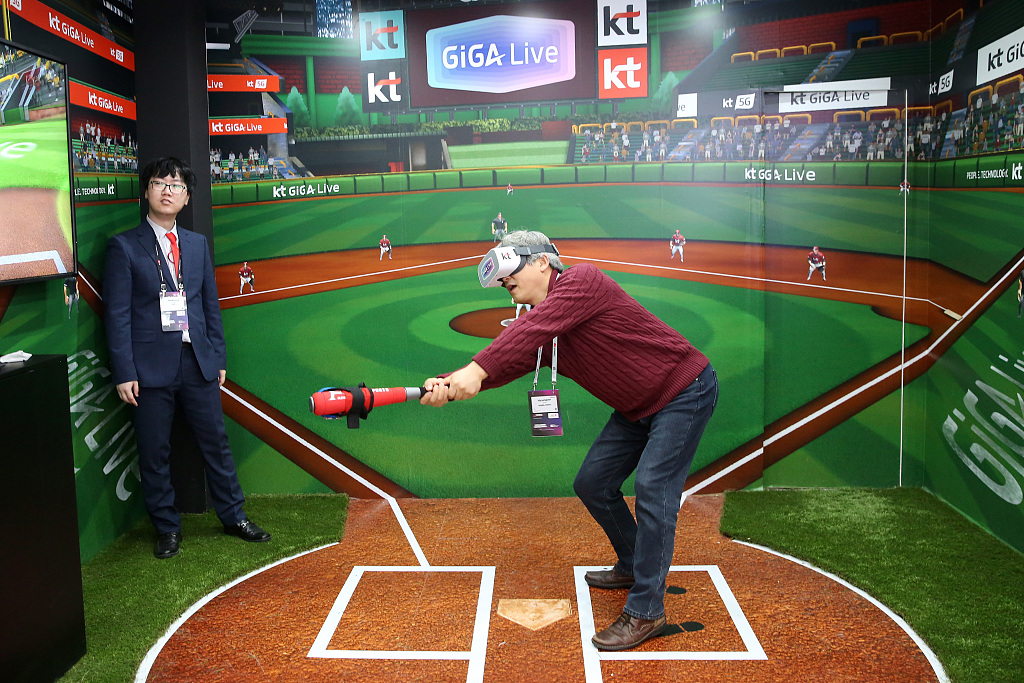 An attendee plays a virtual reality (VR) baseball game on the KT Corporation stand on the opening day of the MWC Barcelona in Barcelona, Spain, February 25, 2019. /VCG

An attendee plays a virtual reality (VR) baseball game on the KT Corporation stand on the opening day of the MWC Barcelona in Barcelona, Spain, February 25, 2019. /VCG

In the world of Steven Spielberg's 2018 movie "Ready Player One", people from all around the world can use custom avatars to play with and against each other in the same virtual world by using wearable technology.

To a certain degree at present, that is already possible: people can walk on omni-direction treadmills or be suspended in midair on wires to expand their active range in a virtual world, and also some helmet or armor-like clothing can let you feel vibrations, heat and wind.

This method of playing sports fits the post-pandemic age, but at the moment, it can only be realized in large, public areas such as the shopping malls, arcades and amusement parks due to the size and cost of the equipment.

But, even if this were to become readily accessible on a consumer level, it still raises a question: Are gamers satisfied with just simulating traditional sports? 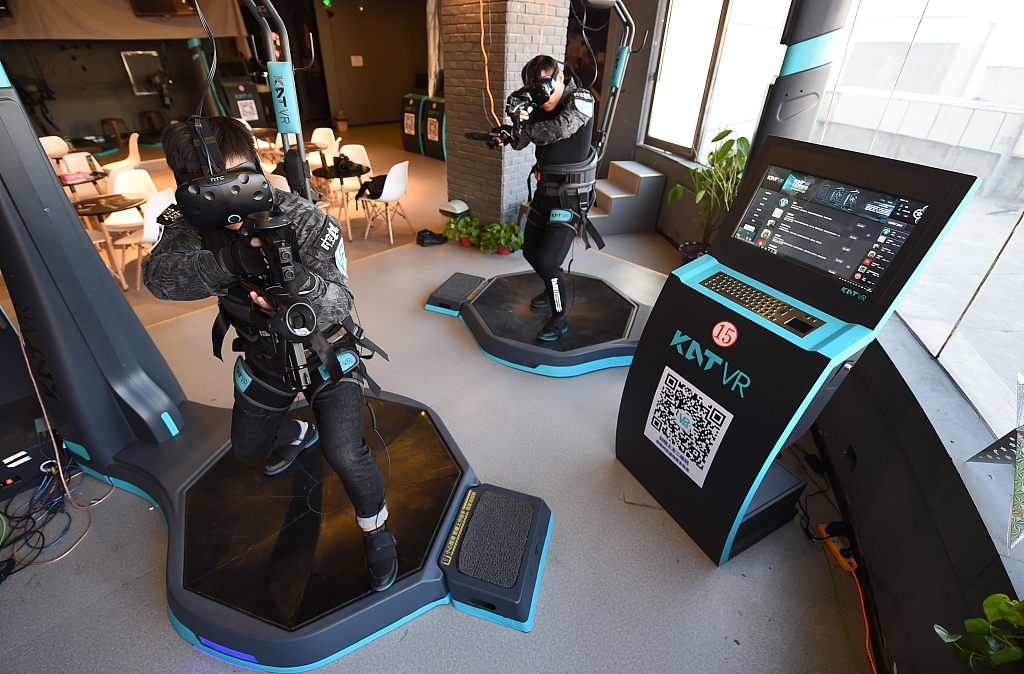 A Japanese company has created an innovative team game called HADO with augmented reality (AR) technology. Through the headset's screen, players can see a game world and their human opponents at the same time, and by doing gestures while wearing the arm sensor, players can perform attacking and defensive moves with virtual fireballs and shields.

During the pandemic, HADO launched a new project called HADO Xball, which is like a reality show happening behind closed doors. Inspired by Asian hip-hop culture, the players move around like dancers or stuntmen on the set of a martial arts movie and the audience, watching the livestreams from anywhere, can give energy to their favorite players by shaking their phone, increases the interactivity between users and making the impact of "the twelfth man" more direct than ever possible in real world sports. 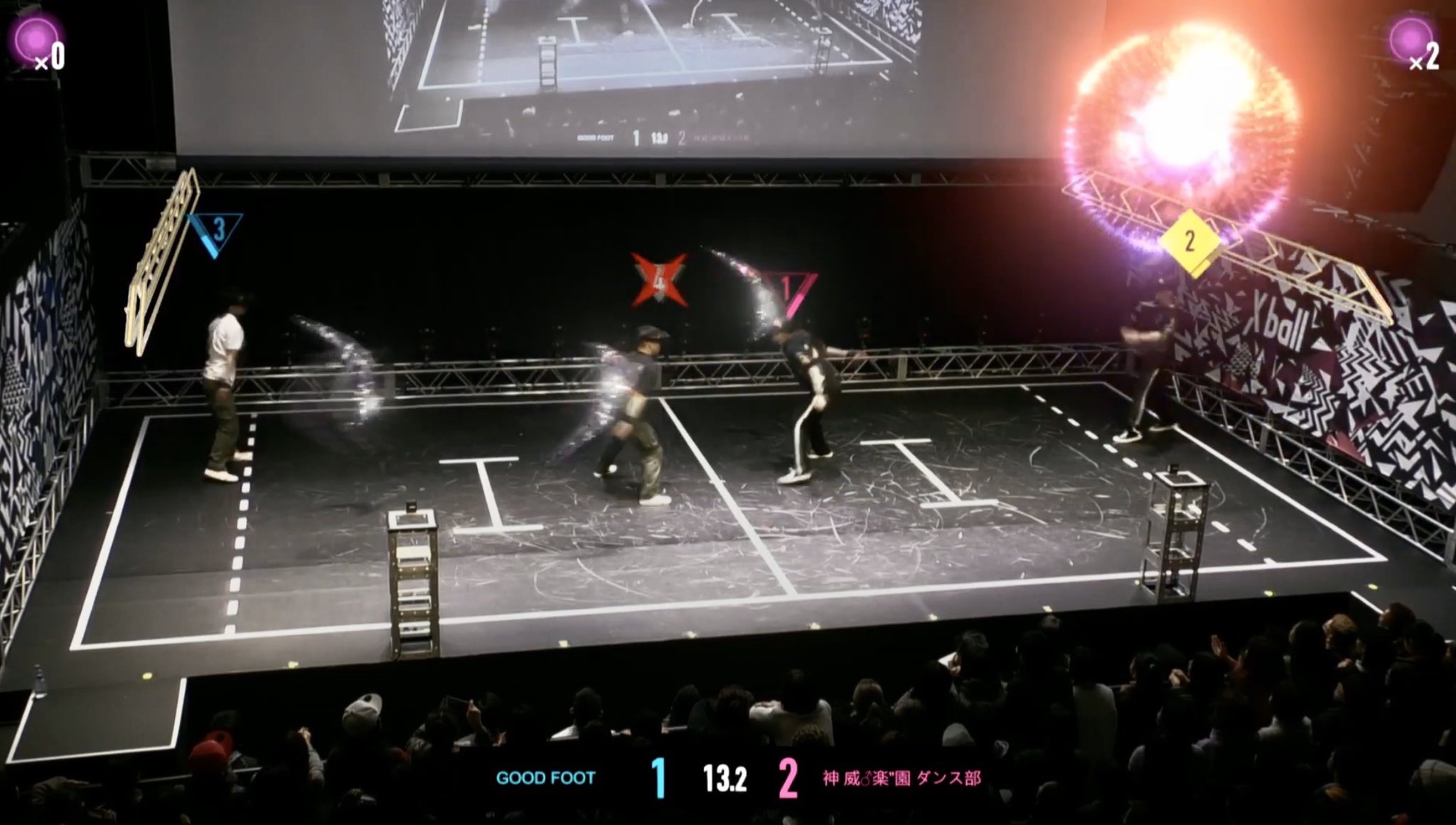 The potential of X-reality is huge, and the market is burgeoning too as the technology is already used in some areas to improve productivity, and many electronic equipment manufacturers such as Apple intend to put AR glasses on sale in the next few years.

As the slogan of Huawei 5G Kung Fu Showdown is "The pain feels real in 5G," perhaps one day soon, people can get the feeling of playing real sports in the virtual world.