A divided Poland: A look at the June 28 election and the issues at hand
CGTN 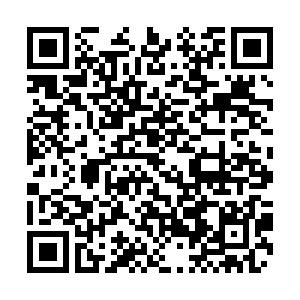 Poland will hold its presidential elections on June 28, which were originally scheduled for May 10 but did not take place due to the COVID-19 pandemic and the resulting lockdown.

The latest poll shows that the incumbent, President Andrzej Duda, who has been in office since August 6, 2015 and whose term will expire on August 6 this year, may face a serious challenge, though his support level remains relatively high.

The contest comes down to two 48-year-old politicians who embody the deeply divided nation: Duda, representing Poles with a traditionalist and nationalist mindset, against Warsaw Mayor Rafal Trzaskowski, the multilingual mayor whose supporters want a liberal, cosmopolitan country. 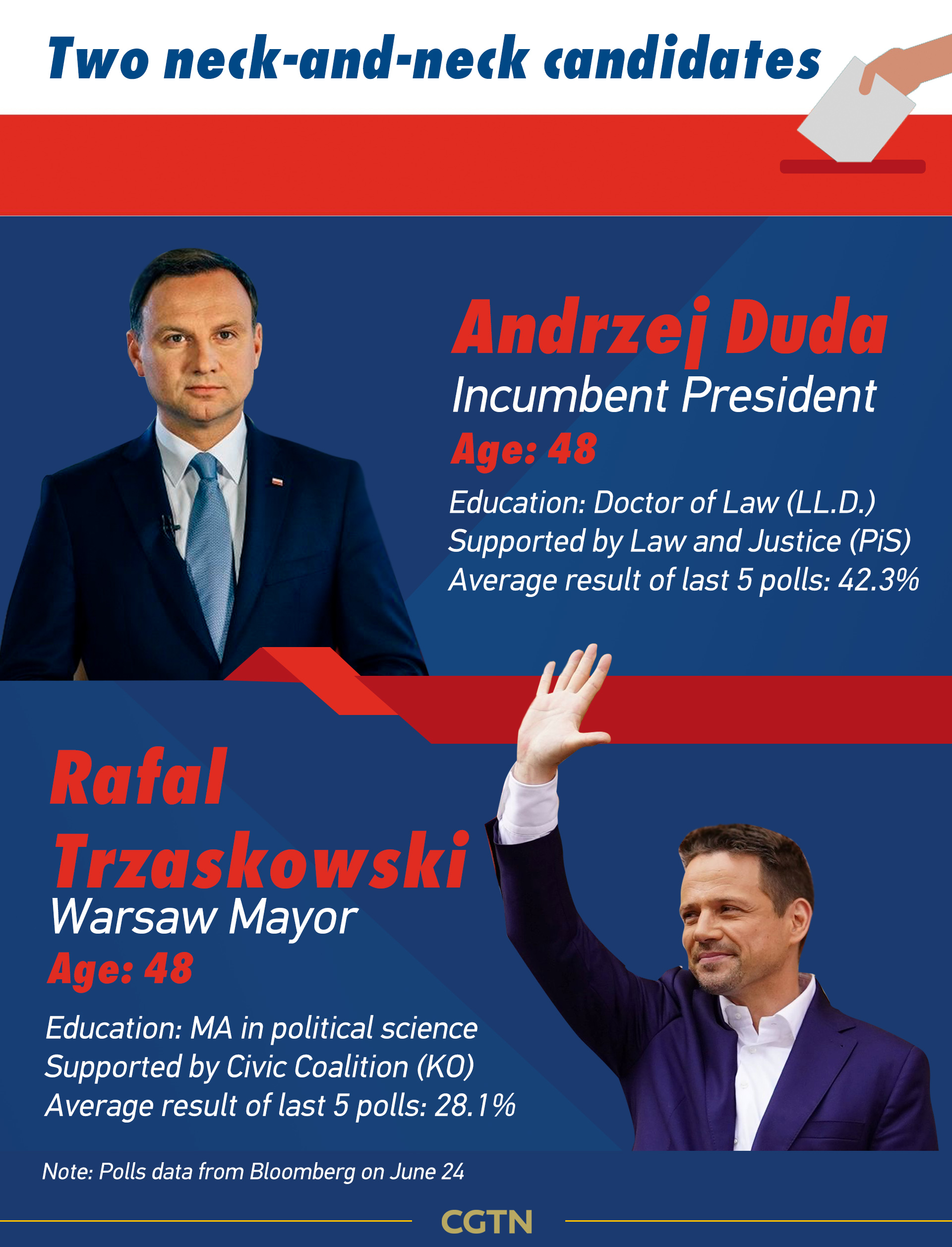 According to the latest polls, Duda and Trzaskowski are tied to win the second round. However, the momentum in polls favors Civic Platform's Trzaskowski.

Under Poland's electoral law, a candidate with more than 50 percent of the vote is elected president directly. If no one gets more than half of the vote, the top two candidates must take part in a second round of voting.

Media has reported that in the runoff, if there is, Duda is set to enjoy some support from supporters of the far-right candidate Krzysztof Bosak, while supporters of the other four candidates are likely to vote largely for Trzaskowski. 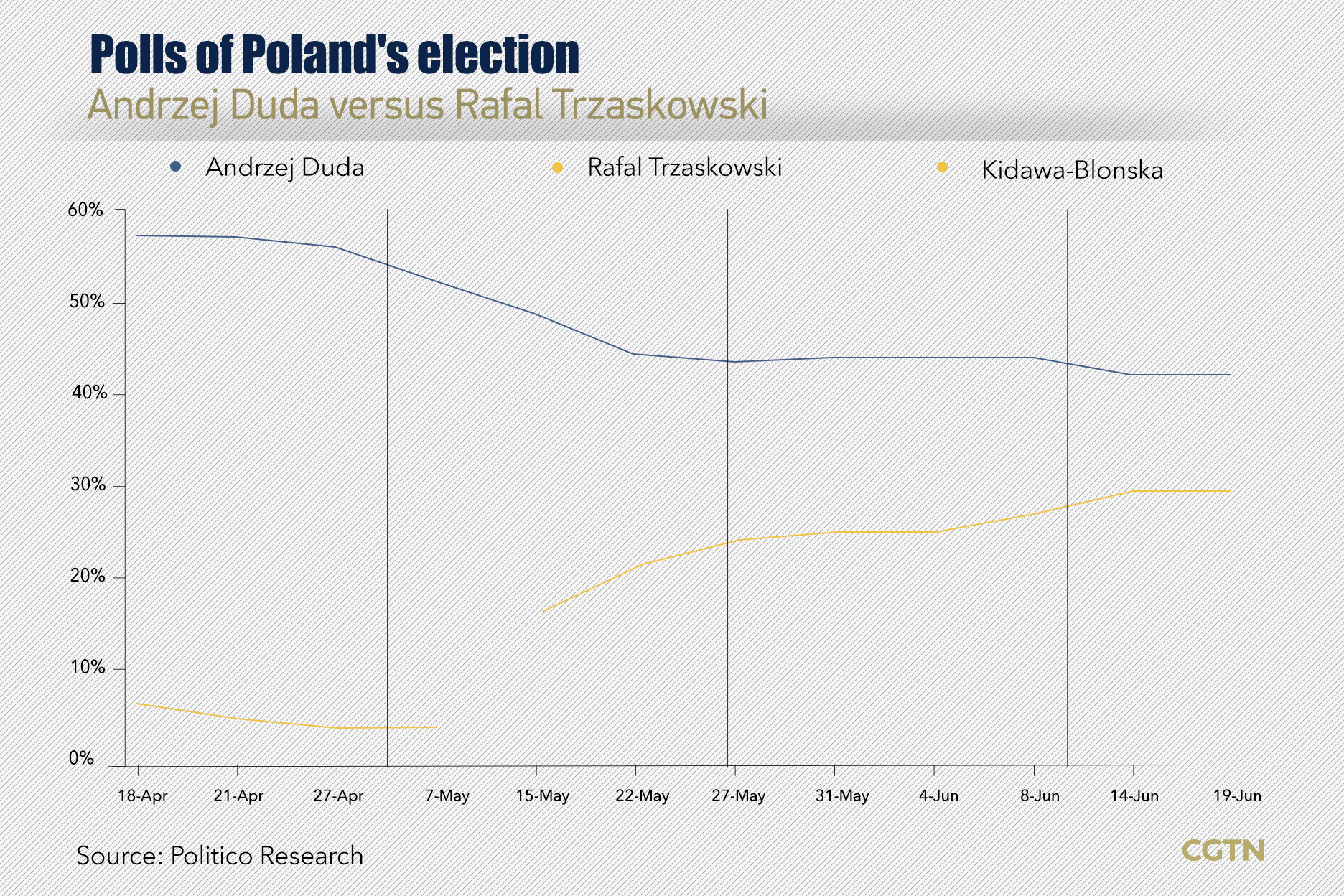 Trzaskowski, 48, was parachuted into the race last month, which gave his Civic Platform party a chance to replace its struggling candidate Malgorzata Kidawa-Blonska, whose support had withered into single digits.

Given just six days by PiS to gather the 100,000 signatures needed to run for president, his campaign amassed over 1,600,000 in four days. 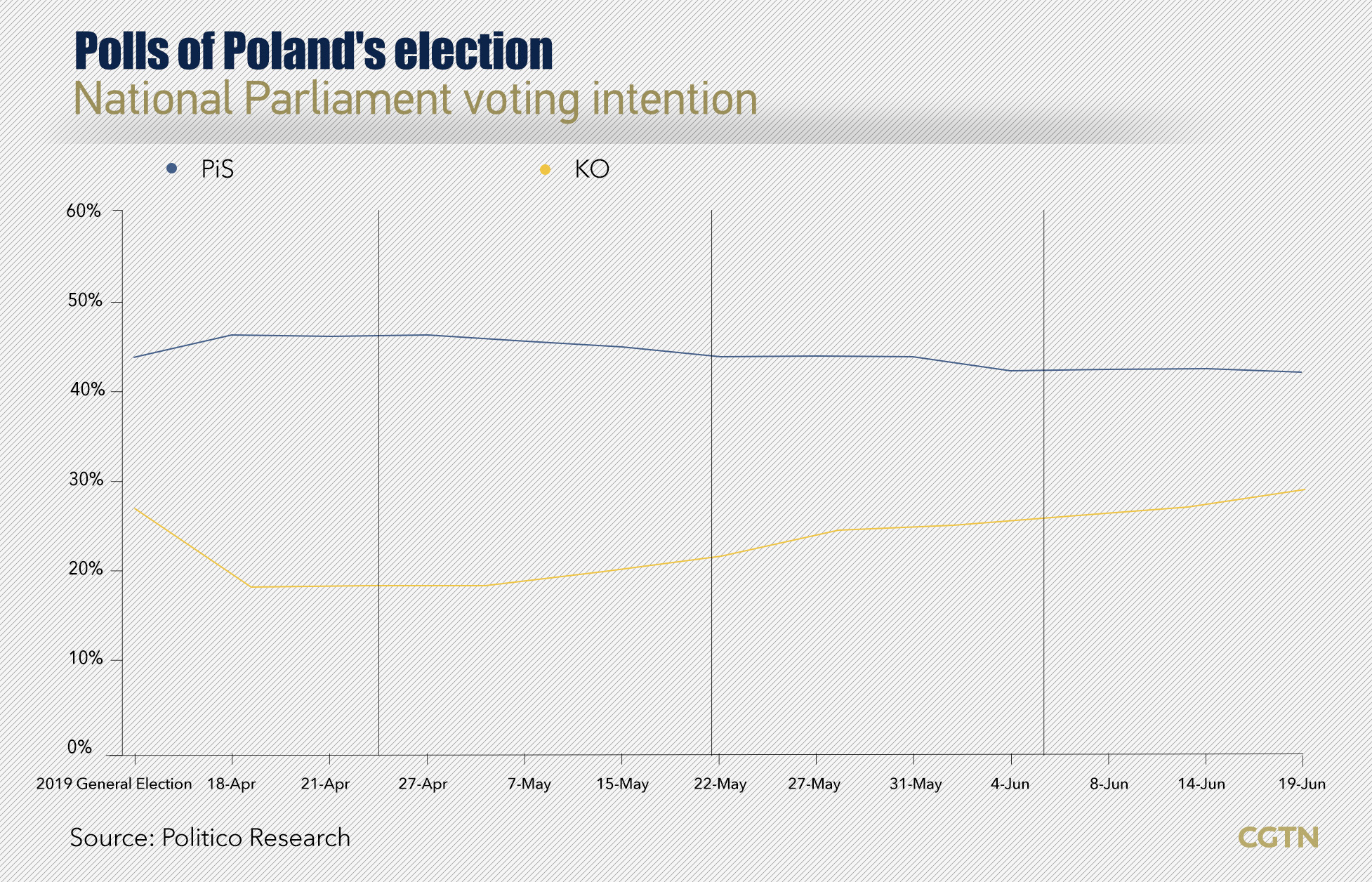 Meanwhile, the election will be the latest popularity contest between the ruling populist PiS party and the centrist Civic Platform, which governed from 2007 to 2015.

Important points during and after the election

In the Polish political set-up, the president of the republic can demonstrate his power by blocking government initiatives rather than promoting his own economic policy ideas.

During the pandemic, Duda proposed several initiatives to fight the crisis. However, only those preferred by the government were introduced into law, for example, a solidarity benefit to the newly unemployed.

The potential lack of agreement with the governing PiS majority would further constrain fiscal expansion if any of Duda's rivals were elected. None of the candidates have proposed a suspension of the flagship social benefits such as 500+, which were introduced by the current administration in recent years.

PiS came to power in 2015 after campaigning on its flagship Family 500+ program, a monthly allowance of 500 złoty (about 125 U.S. dollars) per child for each kid after the first, or for single children in low-income families.

Meanwhile, the bonuses and lower retirement ages are so popular that Trzaskowski has vowed to keep them, saying he has heard what the voters want.

Duda has long been a Trump favorite, praised as "an exemplary ally" who has boosted defense spending and purchased expensive U.S. weapons systems. The president tried to get a boost from a meeting Wednesday with President Donald Trump at the White House, an invitation so close to Sunday's vote that some view it as election interference by the U.S. leader. 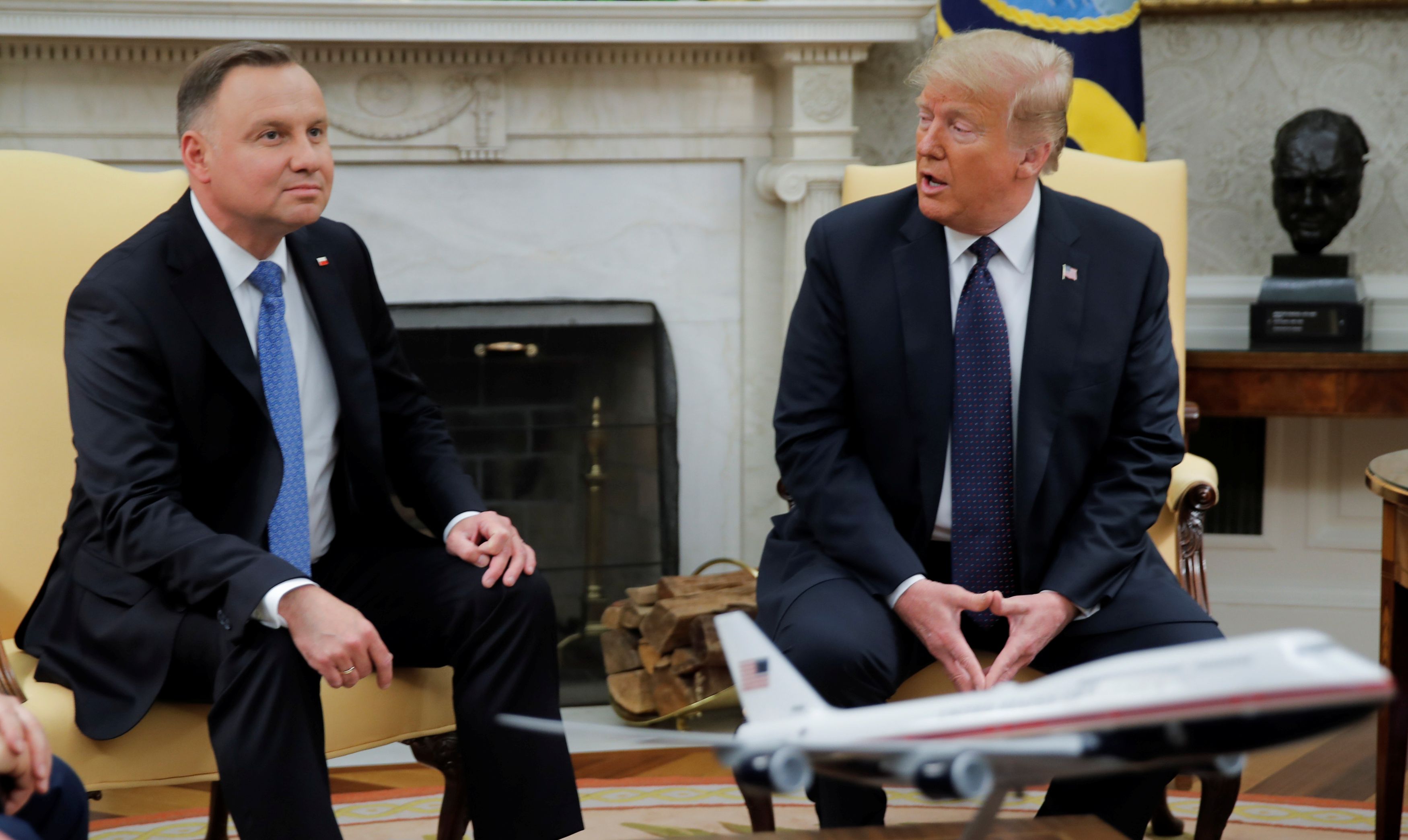 The PiS is keen to secure Duda's re-election as it would cement its grip on power to complete reforms to the judiciary that the European Union has challenged, saying they violate EU standards on democracy and rule of law.

During the last four years, the government has been in an ongoing dispute with the European Commission over the issues. Initially, this was over the membership and functioning of the country's constitutional tribunal, but the standoff escalated in 2017 to include Law and Justice's judicial reforms.

Trzaskowski, a former Europe minister and member of the European Parliament, has told reporters that he will assume the huge responsibility of fighting for a strong "state and for democracy," referring to controversial PiS judicial reforms.

Duda said Poland "sincerely accepts economic immigrants," while the Warsaw Mayor said the issue of refugee relocations had been resolved in 2015 with the signing of an agreement with Turkey.

Much of Trzaskowski's support comes from Poles angry at a government they blame for corruption, inciting homophobia and xenophobia, and undermining the country's democratic foundations.

Gay rights were already a major issue in the parliamentary campaign in October, which was won by Law and Justice, in this predominantly Catholic country where homophobia is still widespread. 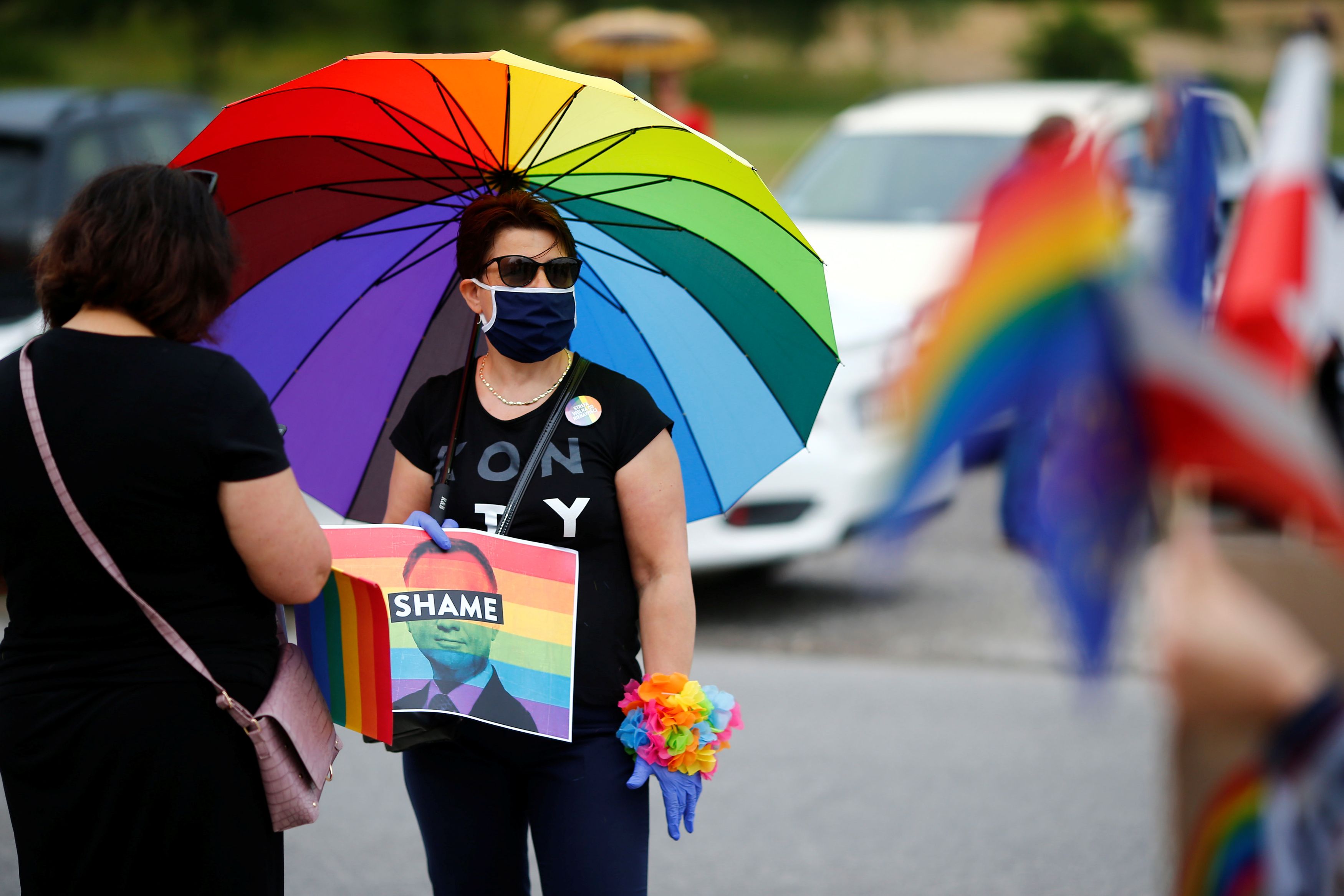 Trzaskowski has said he is open to the idea of civil partnerships between same-sex couples – which is currently not possible under Polish law, while Duda has vowed to defend families from "LGBT ideology."

Signing a "Family Card" of proposals including pledges to preserve special benefit schemes for families and pensioners, he also said he would not allow gay couples to marry or adopt children. "It's a foreign ideology. There is no consent for this phenomenon to happen in our country in any way."