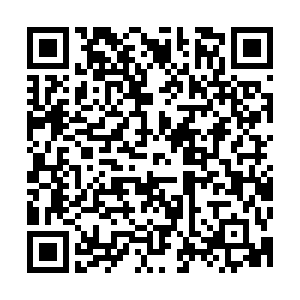 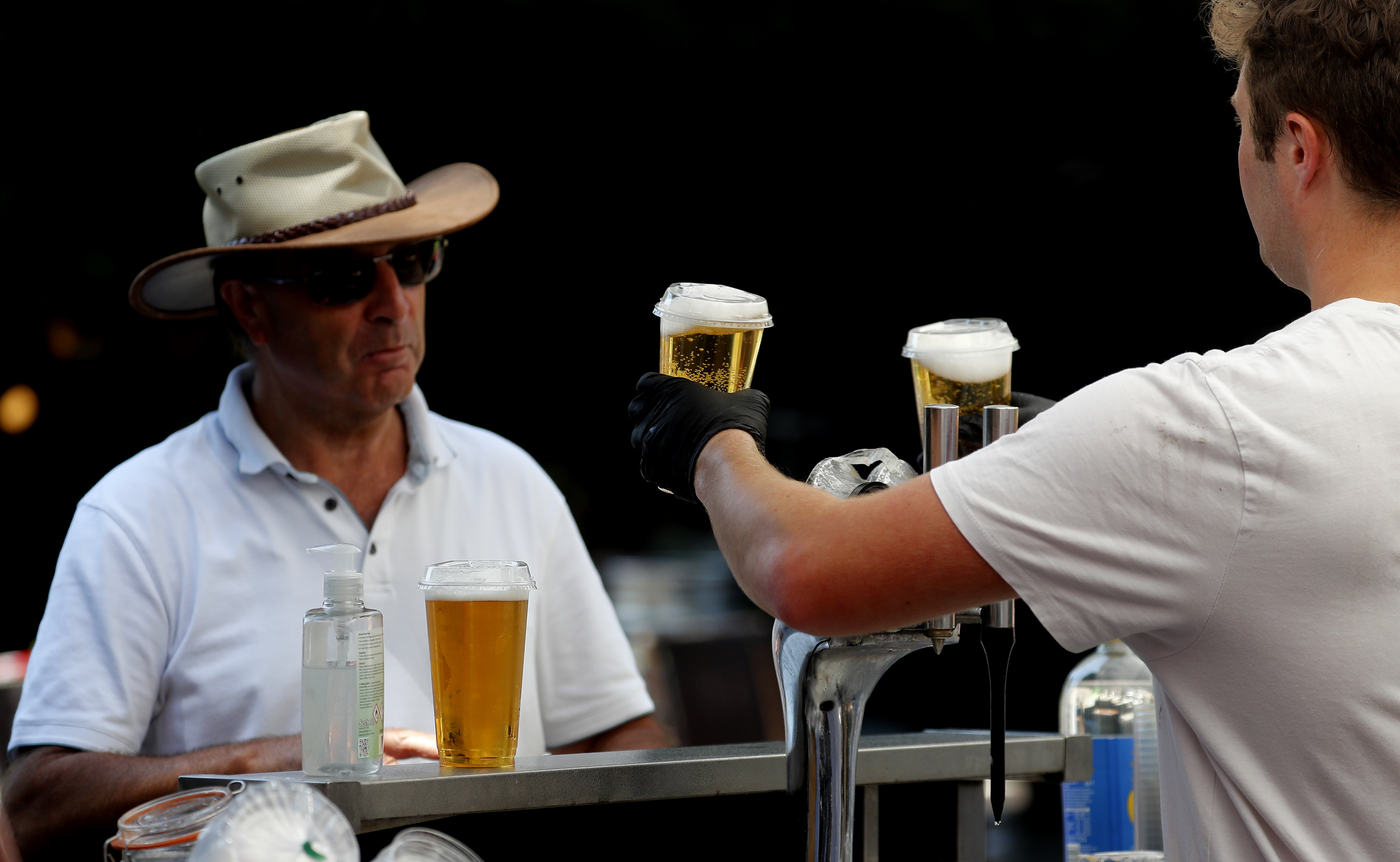 The latest phase in a gradual reopening of the British economy on Saturday will see reopening of pubs and many other public places. The government will also reveal a full list of countries covered by the relaxation of the travel quarantine on Friday, the country's transport ministry said.

The reopening of this round in Britain will see pubs open their doors for the first time since mid March, as well as the reopening of restaurants, museums, hotels and other businesses.

Britain has suffered the deadliest coronavirus outbreak in Europe, with at least 44,000 dead, but infection rates are falling and it is gradually easing a three-month lockdown. The much-awaited event brings excitement to the public, and has dubbed "Super Saturday" in the media.

While, the reopenings still come with strict restrictions like: numbers limited, no crowds, no standing at the bar and no live music, and venues will have to keep a record of customers in case of a virus outbreak.

"Ultimately, the economic health of the whole country is dependent on every single one of us acting responsibly," Prime Minister Boris Johnson is expected to say at a news conference on Friday. 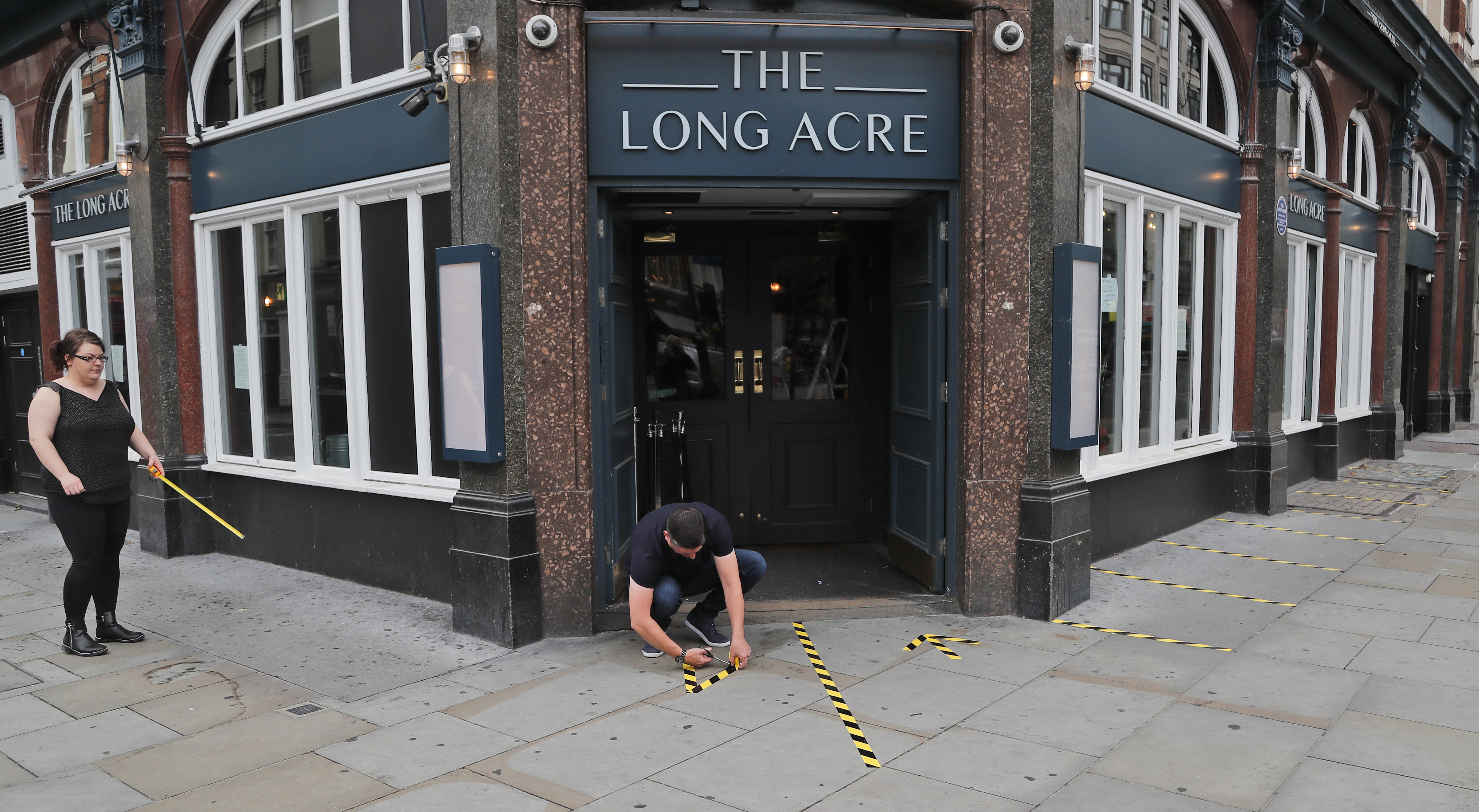 Employees mark the outside of a pub with tape for social distancing, prior to reopening, in London, on June 30, 2020. /AP

Employees mark the outside of a pub with tape for social distancing, prior to reopening, in London, on June 30, 2020. /AP

Meanwhile, the British government will also announce its first exemptions of travel quarantine, with arrivals from Germany, France, Spain and Italy. Travelers from these countries will no longer require to self-isolate from July 10.

However, the exemptions -- applied to countries considered to have a low risk of COVID-19 -- will only apply to arrivals into England. Those arriving into other parts of the UK -- Scotland, Wales or Northern Ireland -- will still have to self-quarantine for 14 days, or face a fine.

Prime Minister Boris Johnson's government had been expected to announce the quarantine exemptions earlier this week, but ministers hinted at disagreements with the devolved administration in Scotland. Edinburgh, Cardiff and Belfast would "set out their own approach to exemptions", the UK government said Friday.

Since June 8, it has required all overseas arrivals -- including UK residents -- to self-quarantine to avoid the risk of importing new cases from abroad. The move sparked outrage from airlines already struggling with the effects of global coronavirus shutdowns, as well as reciprocal moves by other countries.

Aware of the many Brits who want to travel abroad during summer, the government said Friday it expected countries on the exempt list to lift any restrictions on UK travelers. However, it indicated that talks on securing this reciprocal action were still ongoing.

"Today marks the next step in carefully reopening our great nation," Transport Secretary Grant Shapps said in a statement. "Whether you are a holidaymaker ready to travel abroad or a business eager to open your doors again, this is good news for British people and great news for British businesses."

He said the exempt list would be kept under review, saying: "We will not hesitate to move quickly to protect ourselves if infection rates rise in countries we are reconnecting with."

A longer list of countries that will be exempt is expected to be published later Friday, with news reports suggesting as many as 75 countries might be on it.

The Foreign Office also said that from July 4, it would be exempting low-risk countries from its advice warning against all but essential travel overseas. All passengers arriving in the UK, except those on a small list of exemptions, will still be required to provide authorities with contact information. Those who have travelled through non-exempt countries in the preceding two weeks will still have to self-isolate.