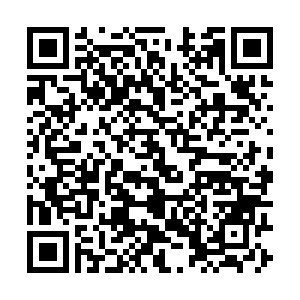 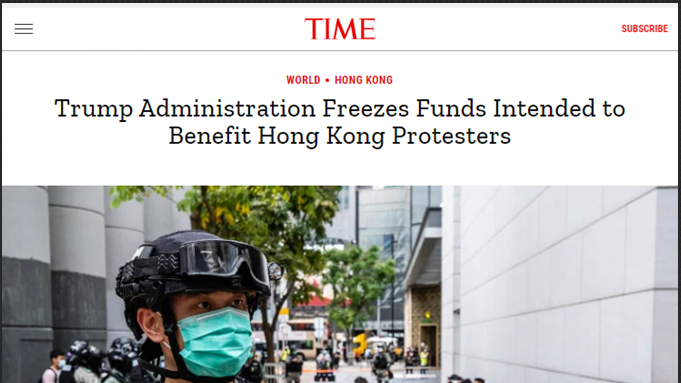 Screenshot of the article "Trump Administration Freezes Funds Intended to Benefit Hong Kong Protesters" on the website of Time magazine, published and updated on June 26, 2020.

Screenshot of the article "Trump Administration Freezes Funds Intended to Benefit Hong Kong Protesters" on the website of Time magazine, published and updated on June 26, 2020.

Editor's note: Azhar Azam works in a private organization as "Market & Business Analyst" and writes on geopolitical issues and regional conflicts. The article reflects the author's opinions and not necessarily the views of CGTN.

It further revealed that the U.S. federal government had frozen roughly two million U.S. dollars of funding, aimed to help the violent protesters in the HKSAR to evade Chinese surveillance, just five days after Trump's ally Michael Pack took the charge as the new head of the controversial agency.

Pack believed that "bolstering (Chinese) firewall circumvention" was still a top priority of his, indicating to continue the U.S. disruptive backing for the subversive elements trying to destabilize the autonomous region.

Though Washington seldom respected international laws and basic norms governing international relations and has consistently been legislating over the HKSAR that tantamount to its gross intervention in China's internal affairs and sovereignty - the fresh epiphany was yet another irrefutable evidence of American involvement in the region to fuel violence and extremism in a bid to denigrate Beijing globally.

Distribution of funding by the U.S. Congress through Washington-based Open Technology Fund (OTF), officially a non-profit organization but actually financed by the Congress with government insight, vindicated Chinese stance that the protests in the HKSAR had a veiled, profound U.S. backing with the sole intention to push the Asian financial hub into a havoc.

The findings also highlighted that the social unrest, vandalism, attacks on law enforcement agencies and street violence had its origins in a foreign country, which has been trying to spice things up in Hong Kong, and the rioters, disturbing peace and playing with the prosperity of the Hong Kongers, were only the puppets of a larger game plan that was conceived and controlled thousands of miles away. 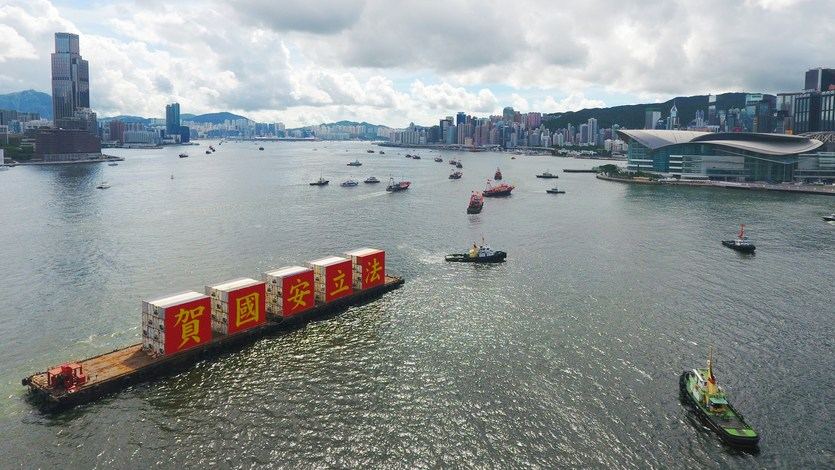 A ship carrying the slogan of "celebrating the passage of the Law of the People's Republic of China on Safeguarding National Security in the Hong Kong Special Administrative Region (HKSAR)" sails at the Victoria Harbour in Hong Kong, south China, July 1, 2020. /Xinhua

A ship carrying the slogan of "celebrating the passage of the Law of the People's Republic of China on Safeguarding National Security in the Hong Kong Special Administrative Region (HKSAR)" sails at the Victoria Harbour in Hong Kong, south China, July 1, 2020. /Xinhua

Washington claimed that the national security law for the HKSAR,  proposed by the Chinese National People's Congress (NPC), was a procedural step, contradicting the spirit and practice of the Sino-British Joint Declaration and the "One Country, Two Systems" principle.

But the latest revelations showed that the law was a timely and rational decision by Beijing - to protect the city from secession, subversion, terrorist activities and collusion with a foreign country or external elements - as well as to ensure the basic human rights of a large number of residents who were filled to brim because of widespread violence that has pushed their motherland to the brink of social and economic collapse and threatened their safety.

The joint-statement of "Non-interference in internal affairs of sovereign states is an essential principle enshrined in the Charter of the United Nations" by as many as 53 countries at the 44th session of the United Nations Human Rights Council on the adoption of the law for the HKSAR was an endorsement to China's right to shelter its national security and prevent the city from a more intensified upheaval.

In the wake of growing chaos, the large-numbered peace-loving local residents were looking at their NPC representatives in Beijing to take some solid peace-ensuring measures to make rioters accountable.

The new law would ascertain an environment where they could practice their rights freely and pursue work to improve the household economy without any violence and vandalism.

Unsurprisingly, the U.S. Secretary of State Mike Pompeo came up with his entrenched spite toward China and said "This (law for the HKSAR) is outrageous and affront to all nations," echoing to implement Trump's directive to end HKSAR's special status though failed to describe how the U.S. would strip the territory of its privileges.

Mary E. Lovely, professor of Economics at Syracuse University and Senior Fellow at the Peterson Institute for International Economics, said Trump's Hong Kong policy was "dramatic but doomed," which will do little harm to China and would further isolate Washington from its allies.

Terming removal of HKSAR special custom "toothless," she also blasted the U.S. tariff campaign that stressed out American businesses and consumers rather than on someone they were intended for.

Time magazine detailed several other projects in the HKSAR that were cramped by the U.S. fund freeze and could just be the thin edge of a much larger wedge. Nevertheless, following better understanding of the territory's issues at the internal arena, the violent protests in Hong Kong are now gradually losing the momentum.

As the new law would further assist to curb social unrest and invoke stability and development in the city, it would help people to regain their well-beings that were lost due to the foreign intervention and the unruly activities of their pawns. The malicious U.S. efforts in Hong Kong are now exposed.