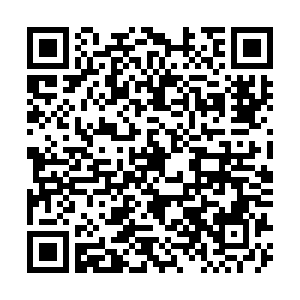 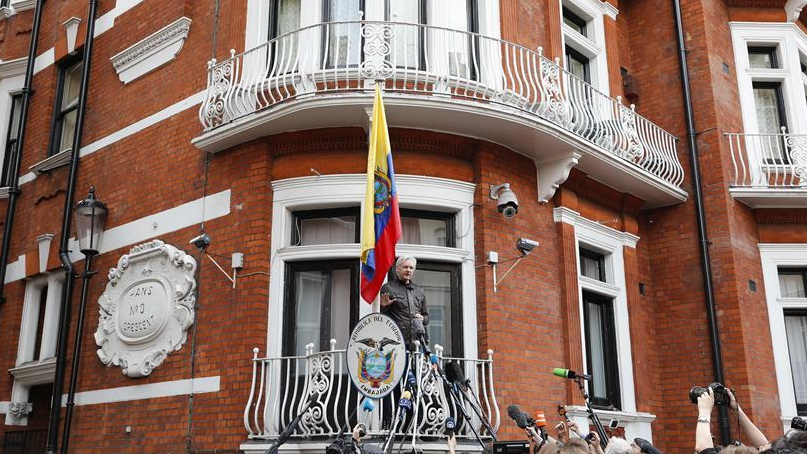 WikiLeaks founder Julian Assange speaking to a crowd of reporters and supporters from the balcony of the Ecuadorean embassy in London, Britain, May 19, 2017. /Xinhua

WikiLeaks founder Julian Assange speaking to a crowd of reporters and supporters from the balcony of the Ecuadorean embassy in London, Britain, May 19, 2017. /Xinhua

On July 3, Julian Assange celebrated his 49th birthday alone – away from his partner and children – in a tiny cell in Belmarsh Prison. The Australian man is being detained in the United Kingdom, not for any crime committed within the country, but solely at the behest of the United States to punish Assange for publishing damning evidence of war crimes, conspiracy and espionage by the United States and its allies.

He is currently awaiting possible extradition to the U.S. where he is facing 18 charges, including 17 charges under the Espionage Act of 1917 and one on conspiring to violate the Computer Fraud and Abuse Act.

This is the first time ever that these charges have been leveled against someone for publishing such information in the public interest. Because of this, Assange's detention represents one of the gravest threats to freedom of speech – a supposedly prized value in the West and the very first part of the United States Bill of Rights.

His detention has set a precedent that anyone who publishes factual information in the public interest may be prosecuted simply for the fact that it challenges Washington.

The U.S. and its media apparatus have turned the narrative against Assange by painting him as a conspiratorial agent, rather than a person publishing information in the public interest.

Such an attack on whistleblowers supersedes U.S. administrations – former U.S. President Barack Obama, for example, launched attacks against whistleblowers such as Chelsea Manning and Edward Snowden, painting both as traitors.

However, U.S. President Donald Trump has escalated these attacks to threaten legal action against publishers, which stems from his repeated insistence that all media critical of his government's actions are "fake news" and enemies of the people.

Such a legal precedent threatens every media outlet in the world, as it's foreseeable that any publisher – anywhere in the world – that publishes information obtained through so-called espionage could face legal repercussions. Because of this, publishers will be forced to ignore valuable information in the public interest or face legal attacks from Washington. Over 40 rights groups noted this in an open letter published on July 3, calling for the release of Julian Assange.

To essentially omit information published by WikiLeaks, or any other publisher who acquires such sensitive yet important information, would mean serious suffering to the public and pluralistic discourse. WikiLeaks has achieved success in shaping modern history by democratizing information that exposes nefarious activity often by those meant to serve the public. 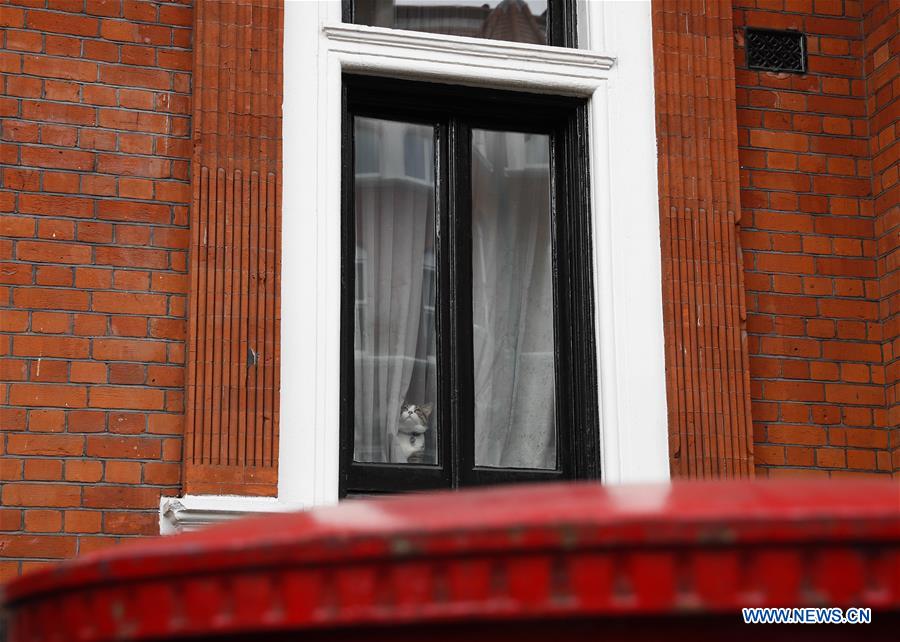 A cat looks out the window of the Ecuadorian embassy in London, Britain, May 19, 2017. /Xinhua

A cat looks out the window of the Ecuadorian embassy in London, Britain, May 19, 2017. /Xinhua

In 2010, WikiLeaks published hundreds of thousands of classified documents related to the wars in Iraq and Afghanistan that detailed the extent of U.S. war crimes. Diplomatic cables later released in connection to this detailed espionage and oftentimes embarrassing reports by the U.S. and its allies during the Bush and Obama administrations. Thanks to WikiLeaks, we've also learned about the detainee policies of Guantanamo Bay, spying operations launched by governments, corporate malpractice and electoral conspiracies – namely the 2016 Democratic Party presidential primaries.

U.S. Secretary of State Mike Pompeo, who once praised WikiLeaks as a congressman during the Democratic Committee email leak, said in his very speech as Central Intelligence Agency director in 2017 that WikiLeaks is a hostile foreign agent.

Such flip-flopping on the issue of WikiLeaks, depending on whether one is the political beneficiary of the leaks, is transparent opportunism that, along with the U.S. government response, clearly speaks to the veracity of the documents posted by WikiLeaks.

The discussion of whether WikiLeaks should be categorized as "disinformation" – as many in the U.S. have tried to do over an alleged (and unfounded) connection between WikiLeaks and Russia – is negated by this reality.

Many in the West claim to defend the institution of journalism and the right to freedom of speech, yet show clear biases and political maneuvering when confronted with facts that may be hard to swallow. This regularly degenerates into a loss of impartiality that always manages to benefit Washington and its political interests.

For example, many have taken the opportunity to criticize the new Hong Kong national security legislation over its extraterritoriality clause in Article 38, something justified by the fact that foreign actors are verifiably interfering in China's internal affairs.

At the same time, these actors already find themselves in free fall on the slippery slope they claim China is setting up, as Julian Assange, who is languishing alone and in poor health, awaits extradition to the United States for the crime of publishing inconvenient truths.

In order to levy such criticism against anyone else, one cannot in any way justify the arbitrary detention and likely extradition of Julian Assange. It's time for Washington, its allies and stenographers to decide whether or not they actually believe that "the open exchange of information and ideas" is really "vital to free, prosperous and secure democratic societies," as Secretary Pompeo said on the occasion of World Press Freedom Day.