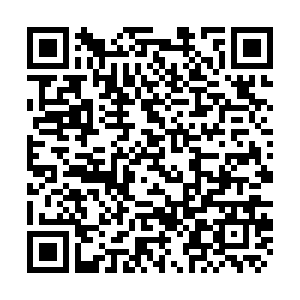 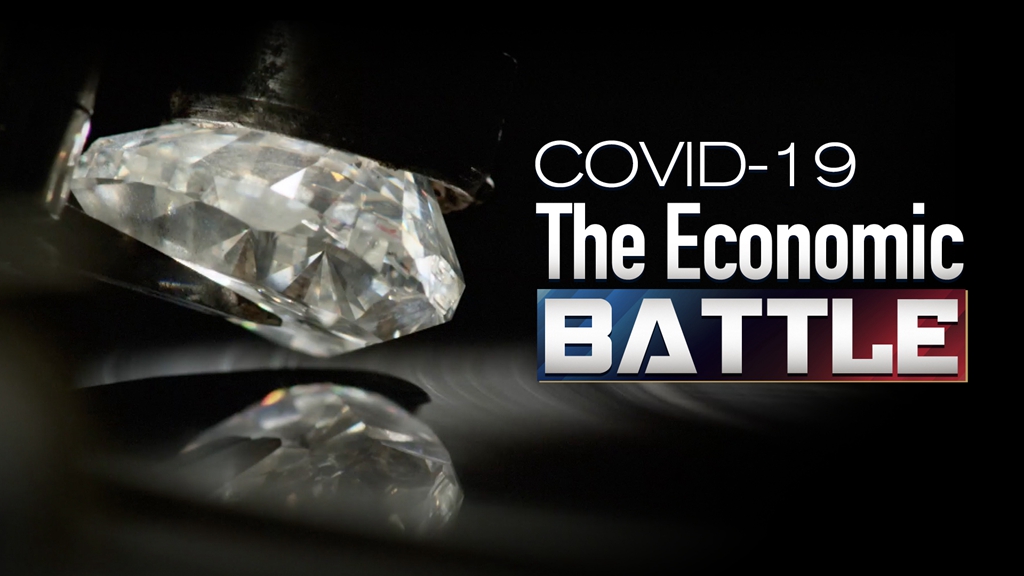 Marilyn Monroe's popular song "Diamonds are a girl's best friend" made the gemstone a popular symbol of "forever love" for half a century, but so far this year, the shinning rock has been completely overshadowed by the COVID-19 outbreak.

The coronavirus pandemic has dragged the diamond industry to a near full stop. In the first quarter, the global diamond demand plummeted to its lowest since 2009, according to Edahn Golan Diamond Research & Data. With consumers under varying degrees of lockdown as well as social distancing, jewelry retailers had very limited sales during the period, and most of them closed majority of their stores, said the report. 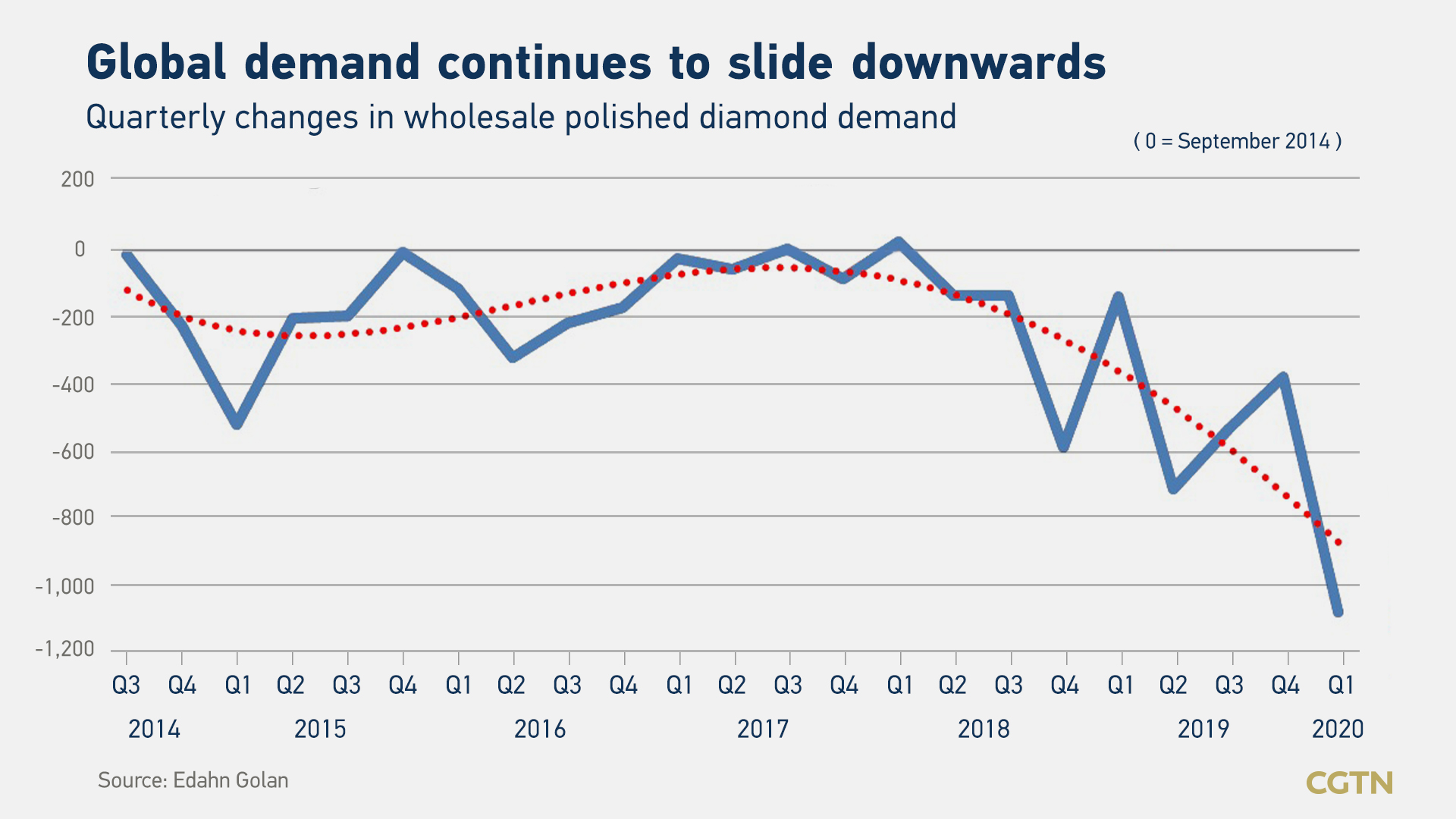 "There is no business. It's zero business," Xu Dan, vice president of Israel's leading jewelry manufacturer Caprice Diamond & Jewelry, told CGTN, adding that she has never seen this kind of business downturn in her entire career.

"It is most difficult psychologically," Xu said. In early February when the coronavirus had just started to spread around the globe, she thought the pandemic would only last for a month or two, "but now, no one knows" when it will end as many countries have failed to contain the virus.

The hit is not only on retail, but the whole diamond industry chain. Diamond companies are struggling to deal with their goods in hand. According to specialist gem consultancy Gemdax, the five largest diamond producers have stockpiled "excess inventories" of about 3.5 billion U.S. dollars, and that could touch up to 4.5 billion U.S. dollars, or one-third of the yearly production, by the end of 2020.

In the midstream, lack of labor is the biggest issue. Based on statistics, India cleans and polishes 80 percent of the world's diamonds, but in last few months all 1.3 billion Indians have been under a strict lockdown. The diamond activity in the country was down to a trickle. 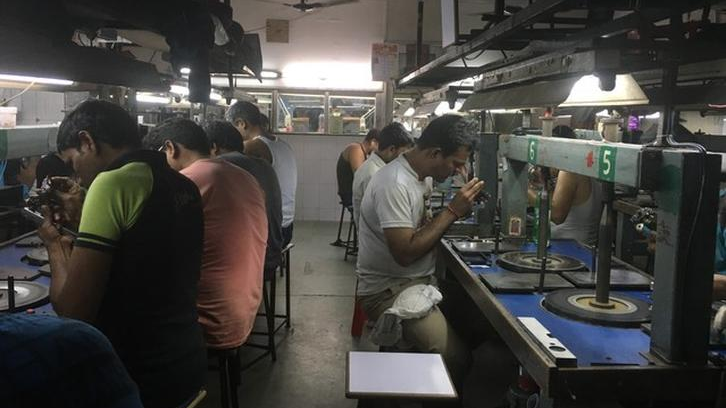 "For the moment, the capacity to produce or to mine diamonds and the capacity to cut and polish rough diamonds has been scaled back to meet the current demand," said Nancy Liu, CEO of Forevermark, a subsidiary of De Beers Group which is the world's largest diamond producer by value.

Diamond information server Rapaport Group expects that diamond production will reduce by 23 million carats this year, a decline of 16 percent in terms of volume. In value term, the production will drop by 29 percent, back to the low point in 2009.

"To be honest, it's kind of a recession," said Yoram Dvash, the president of the Israel Diamond Exchange and vice president of the World Federation of Diamond Bourses. "I don't think any business in the world can continue and work like it used to work." 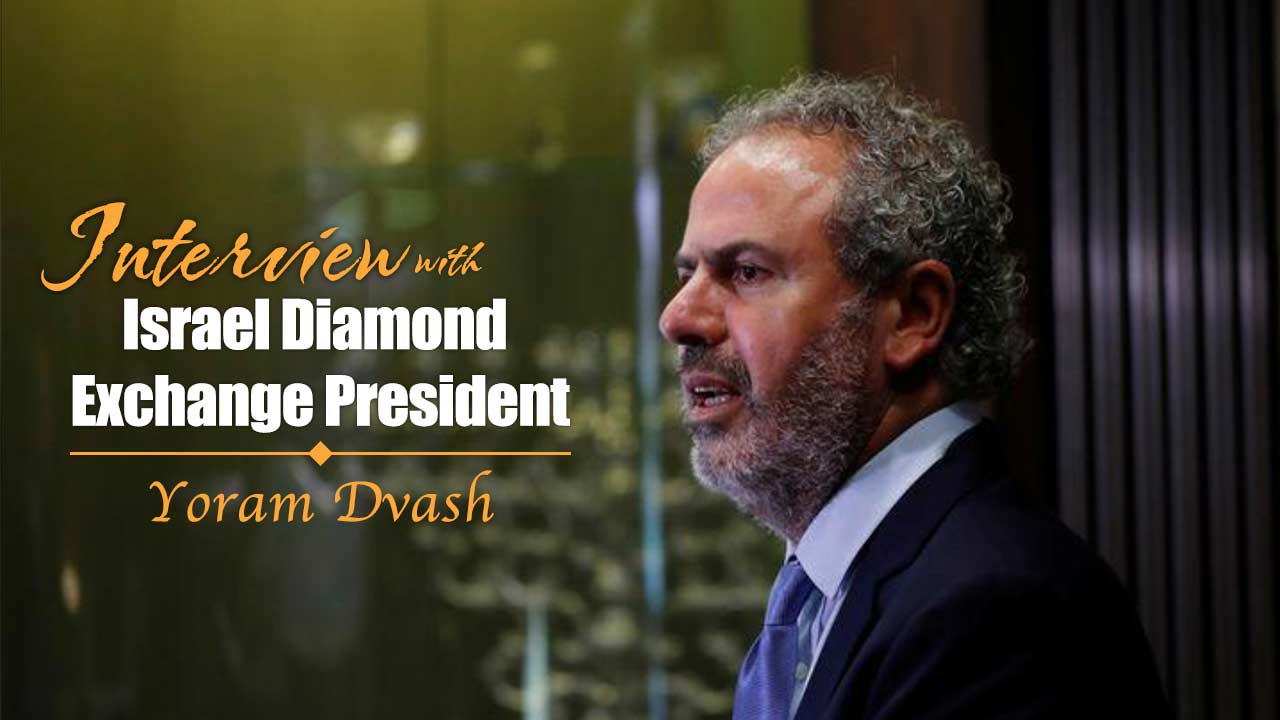 Law of the jungle

"Only strong companies can overcome this crisis," said Xu, implying many small businesses are in financial difficulty to maintain their business and many of them will be rushed out by the law of the jungle.

Xu's company is strongly based on tourism, but the global transportation inconvenience has forced her company to eye on Israel's local market. Also, she started online business, but most deals were from old customers.

"Believe me, the big players need the small fish in the sea and the small need the big ones."

But even top companies found it hard to save themselves. In March, UK-based Firestone Diamonds conducted delisting from public trading to reduce costs. And in April, Canadian specialist diamond mining company Dominion Diamond Mines filed for insolvency protection.

The market expects the industry will need at least 12 months to get a full recovery, according to Antwerp World Diamond Center and Edahn Golan. 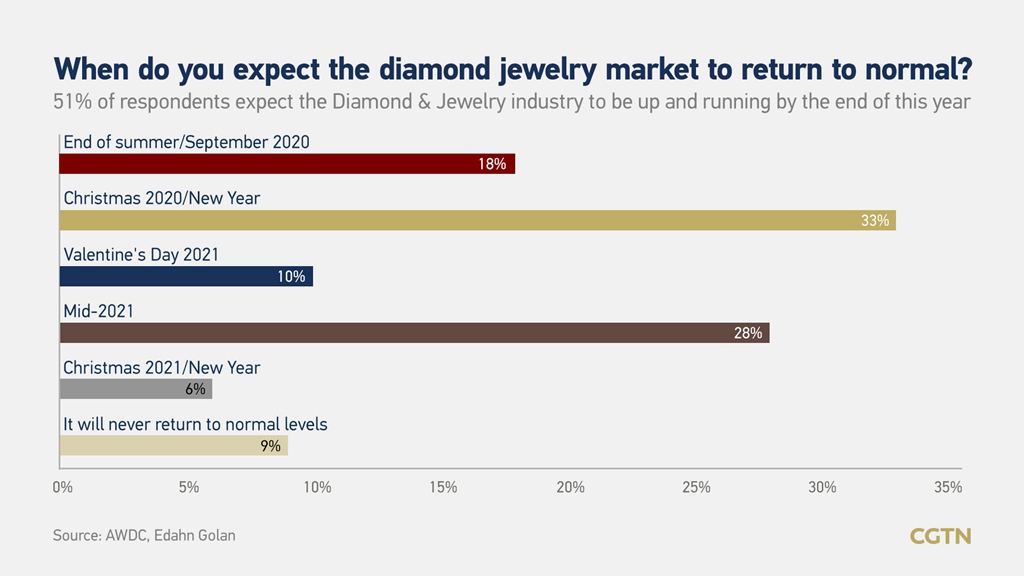 Chinese shoppers, as the world's second-largest and fastest-growing diamond market, may become the driving force for recovery.

"We can see in China, Chinese mainland in particular, the growth has come back," Liu told CGTN she saw a double digit business growth in Greater China area in May. "The growth has been coming from the Chinese who normally would have traveled overseas, are now staying at home in buying onshore."

For the moment in China, the CEO implied the industry has already been in the right side of V-shaped recovery. But in other markets, such as U.S., India and Japan, the businesses continue to be soft.

"The primary reason is that the government is working with the people to contain the COVID-19 pandemic a in a very structured way," Liu explained. "So consumers feel much more confident coming out and resuming their normal lives."

Dvash echoed Liu saying "China got into the crisis first, but she recovered first."

From his observation, the diamond industry in China is minus 55 to 60 percent compared to last year. The president clarified that the number is fairly good under the current pandemic situation when most diamond factories are still closed. 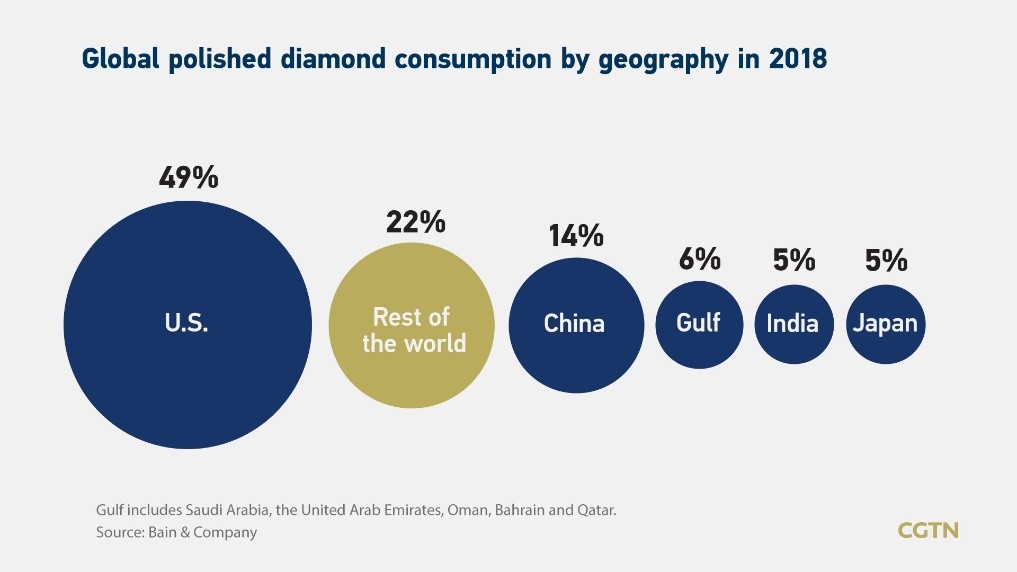 Prices and future are still there

Even though the diamond sector has been hit and, the retail prices are still there.

"You don't have demand, but you don't have supply," Dvash told CGTN the balance between demand and production, which are both poor now, has made the diamond retail prices steady.

Another reason comes from the diamond industry's market shares. Dvash said that two biggest diamond producers, Alrosa and DeBeers, in which 70 percent of the rough diamonds come from, did not cut their selling prices. Even though small players slash their prices for cash flows, they won't make much difference to the overall market.

"I understand this is life," said Dvash, but also implied that stable price is an indication of strong market and industry.

According to Edahn Golan report, rough diamond prices at tenders were down sharply, but polished diamond prices were largely stable during the COVID-19 pandemic.

CGTN reporter visited several diamond jewelry stores in central business district of Beijing, China in late June and found no significant price drop. However, all of the store sales admitted there were only one or two footfalls everyday in the last couple of months.

"What we have seen is maybe just the postponement of bridal," said Liu, pointing out the reason behind is the demand for diamond does not disappear. "But it doesn't mean that they're not getting married."

She added that although it sounds counter-intuitive, people are asking for larger diamonds because they may not spend money on travel and wedding banquets, "so they have more cash on hand." 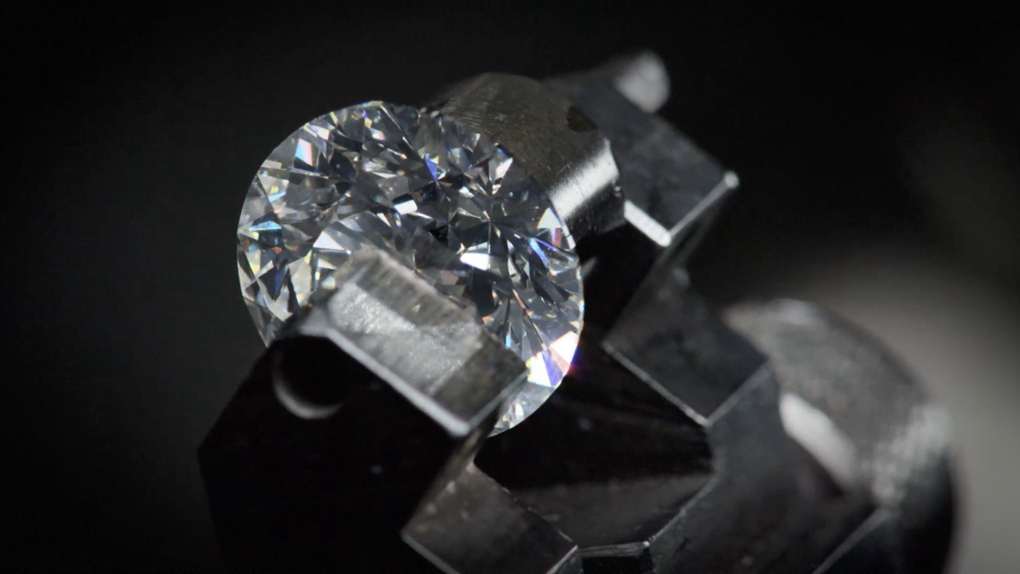 Standing as the president of the world's largest diamond exchange, Dvash believes more and more diamond businesses would be transformed from stores to online in the future.

"This is the movement in the diamond industry. After this situation, it would be much faster," said Dvash.

For companies, Liu has seen the biggest growth area is beyond bridal, which means people would like to buy diamonds for special occasions to mark their special moments.

Xu echoed Liu in believing that the diamond would not just be for marriage in the future, adding that every woman wants new and more diamonds.

"Diamond will still keep shining in the future," Xu said in a very dedicated emotion.