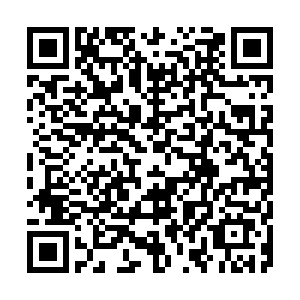 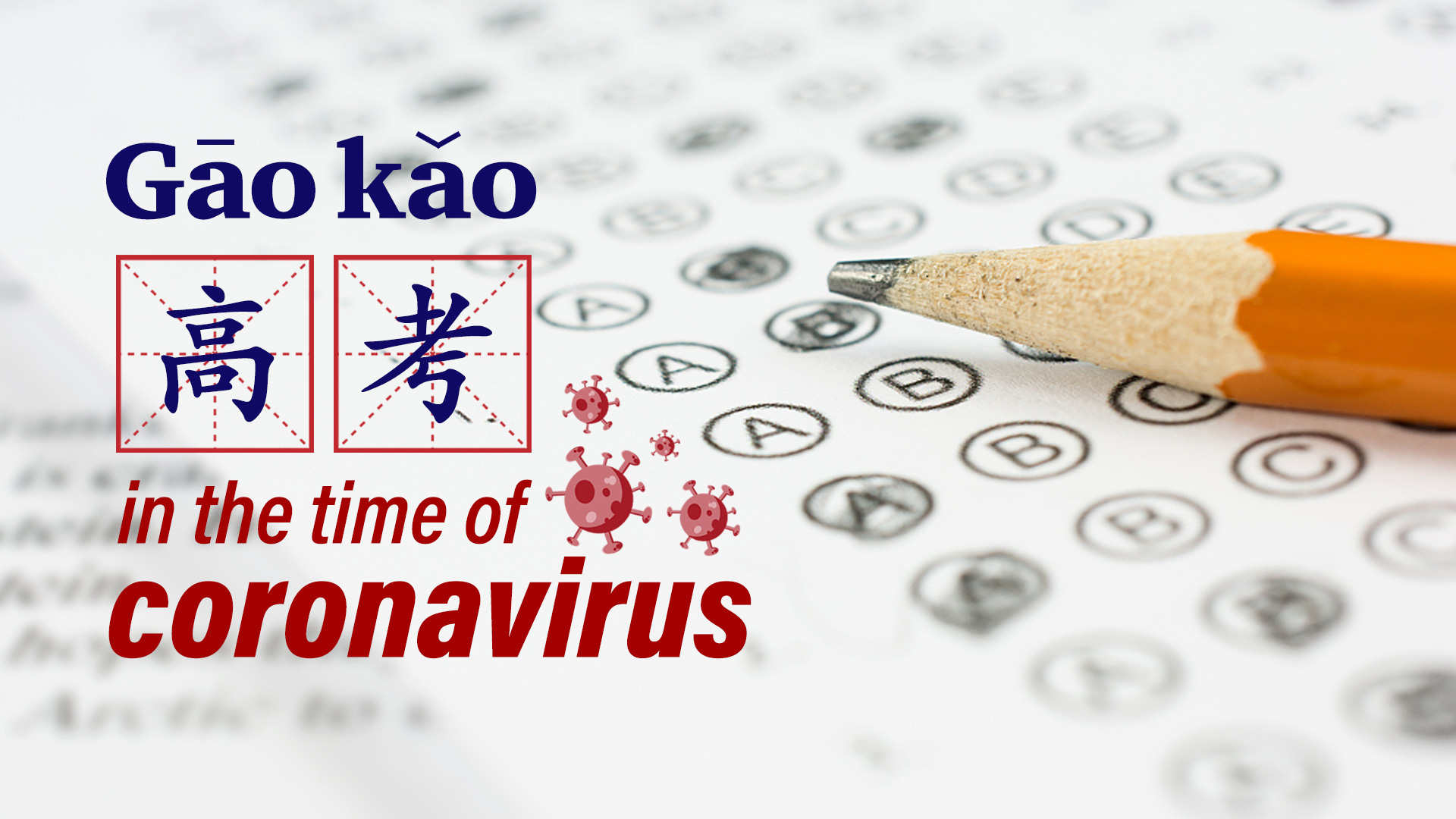 Over the past months, Shen Yue, a high school senior in northern China, has grown increasingly fidgety with the national college entrance exam, known colloquially as Gaokao, around the corner.

By Tuesday, she will be one of the 10.7 million students to sit for the make-or-break annual examination, which has been postponed for a month because of the COVID-19 pandemic. Since the outbreak of the coronavirus, she has joined an army of students from all grades to learn remotely.

"Her winter holiday, which started from January 19, should have ended on January 29. But the outbreak messed up the whole thing," said her mother. In early February, Shen's school, a top-notch high school in Hebei Province, quickly moved to online teaching, which lasted for nearly three months.

Every day, online classes commenced at 7:30 a.m. and finished at 6:00 p.m. Shen would then do homework till midnight. Learning through the internet and other mobile devices at home has made a huge difference compared with on-campus study. "For students who lack self-discipline like her, spending such crucial months leading to the Gaokao is nothing short of a disaster," her mother told CGTN.

Moreover, it took Shen more time to adapt to on-campus life that resumed on April 23, particularly as teachers accelerated the speed for lessons and arranged more tests. 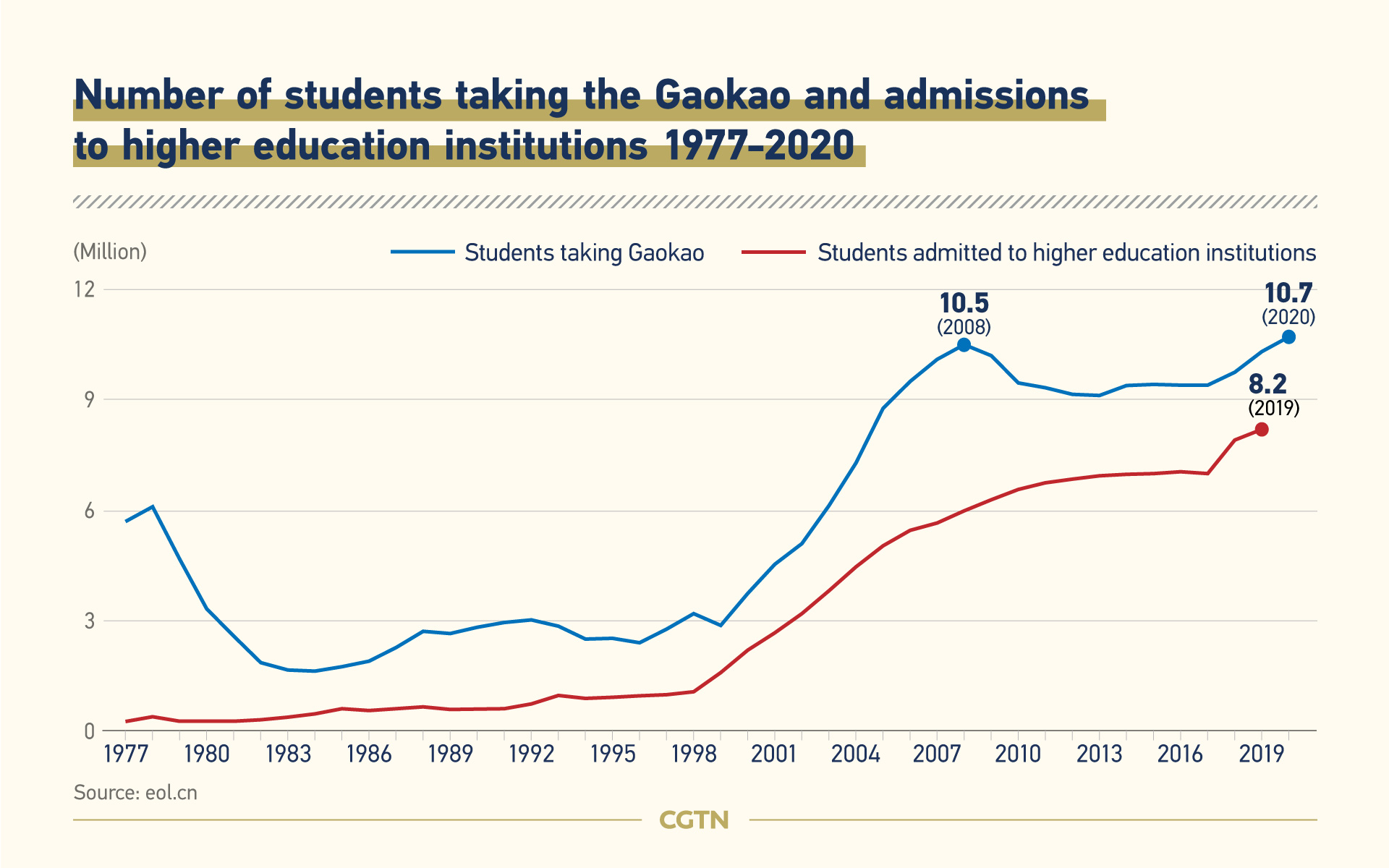 This year, about 10.71 million students have registered for the annual college entrance exam, also known as the Gaokao, reaching a historical peak. Also, the enrollment of higher education institutions has increased.

This year, about 10.71 million students have registered for the annual college entrance exam, also known as the Gaokao, reaching a historical peak. Also, the enrollment of higher education institutions has increased.

Difficulties in the era of COVID-19 have contributed to these learning obstacles. Taking lessons and doing problems in front of a screen for extended periods have caused vision problems for many students, while the everyday realities during the pandemic such as the constant taking of temperatures and nucleic acid testing has placed a great burden on the psychology of these Chinese youths.

Despite living in uncertain times, the Gaokao remains an inescapable fact for students in the country. The news at the end of March that the dreaded standardized exam would be postponed for a month only put greater strain on Shen and her family. "She's too stressed," according to her worrying parents. "The psychological pressure has caused her to suffer headaches, stomachaches and other physical complaints from time to time."

The tension has spread to the entire family. Even Shen's grandparents have been under constant pressure as she scores lower marks on every examination leading up to the most important test that would change many destinies. There's a saying among high school teachers that the Gaokao score is kind of an average of the four exams preceding the final one.

Meanwhile, during the examination period, students and teachers must live on campus. When Shen has some free time, she calls her parents to keep them up to date. 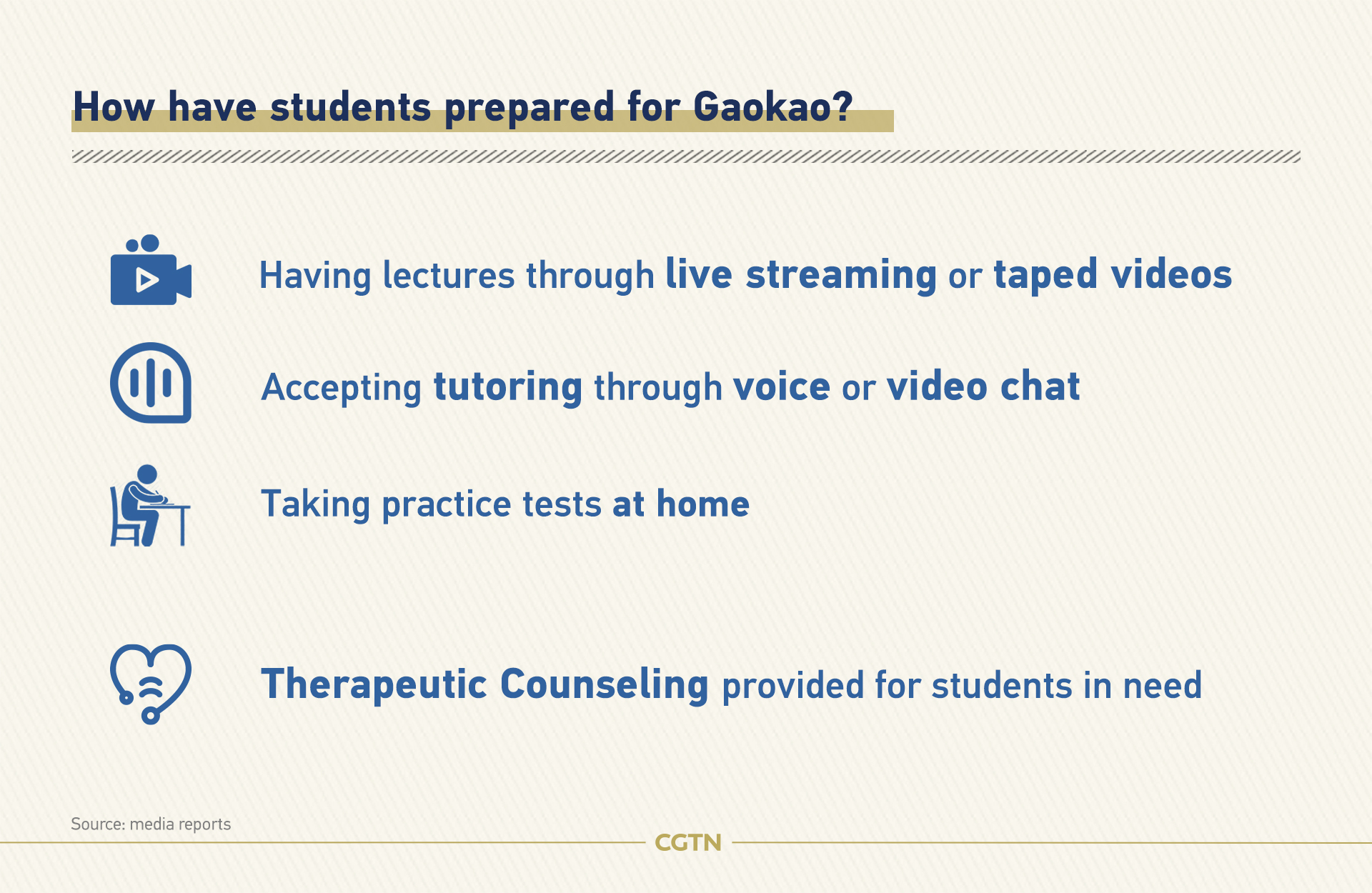 Everyone's in the same boat

For Wang Chao, a 20-year-old high school student in east China's Shandong Province, underwent surgery and stayed in the hospital for over a dozen days. "I've been on a hectic schedule to catch up. But still I can't concentrate alone at home," he told CGTN. "Something isn't right here. Perhaps I need teachers present and my classmates, too, to fuel a sense of urgency. It's easy to slack off."

Shandong is known for cultivating talents with high cut-off scores on the world's most formidable examination. But many of the students there have lowered their expectations regarding their dream universities. For Wang and his peers, they've been riding a roller coaster as they switch from offline to online and back to offline again. But the one-month extension makes little difference to him. "Everyone's in the same boat." 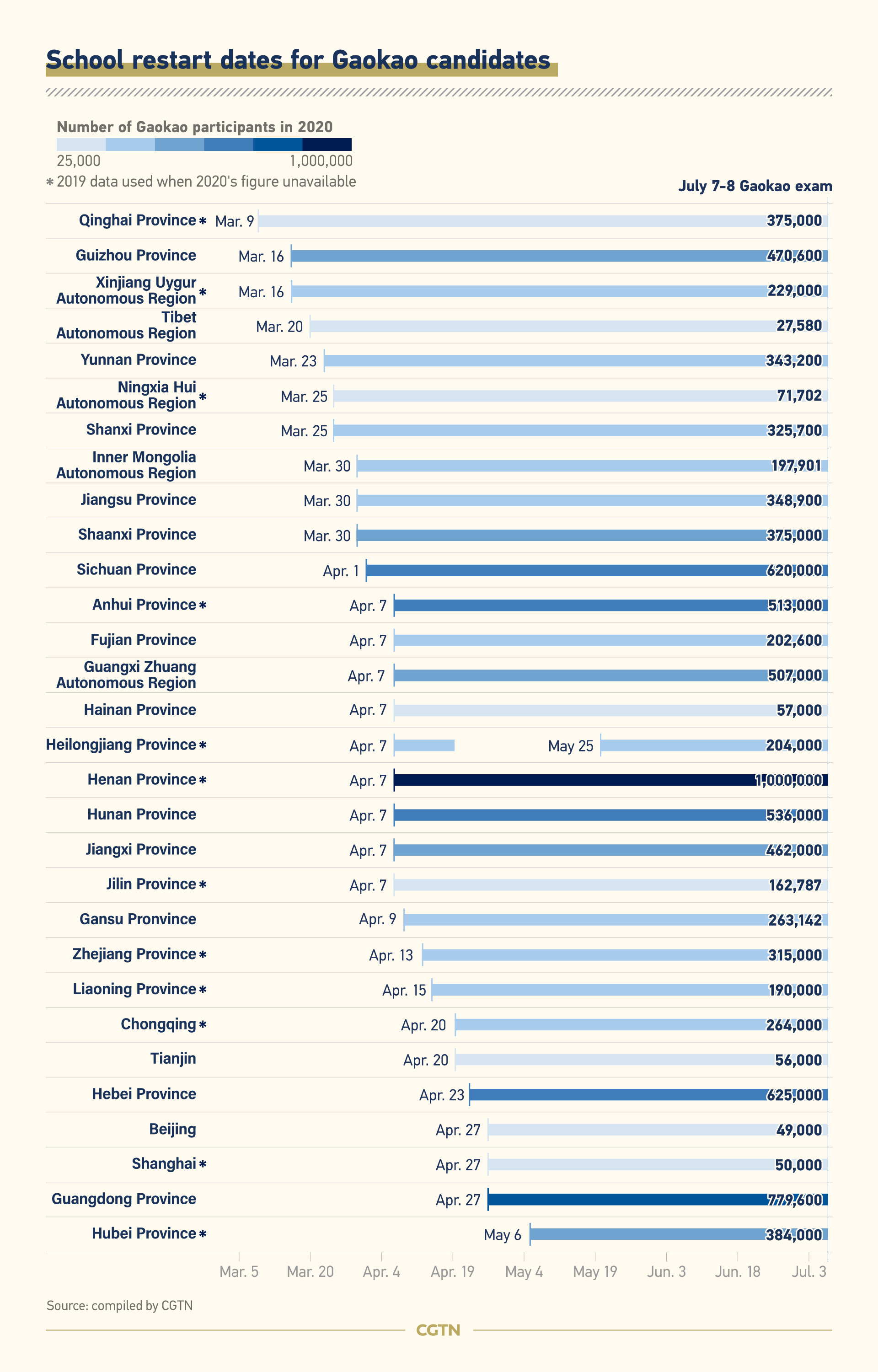 On March 31, the Ministry of Education announced that this year's Gaokao will be pushed back one month to July 7-8 – the first time the dates for this exam have been changed since it resumed in 1977 after it was suspended for a decade during the Cultural Revolution (1966-1976).

The exam will be the largest organized public event since the coronavirus outbreak, according to the ministry, and the postponement will help lower the health risk posed to the millions of students. By early July, new COVID-19 cases dwindled in most parts of the country, with sporadic ones surging in a few metropolises and port cities. Concern over education equality also contributed to the decision. Postponing the one-off exam will help decrease the gap in education as many students in impoverished regions were left behind in online learning due to patchy internet connection.

As for Shen, the Gaokao is a ticket to her dream of studying medicine. But the disruptions have upended her preparations for the exam, since medical universities usually require high scores.

"I hope she can be a 'dark horse,'" her mother said. What could drag Shen's family back from the psychological brink might be the upcoming holiday – the fortnight before the scores come out.