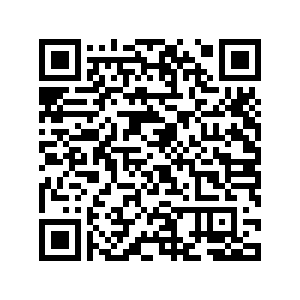 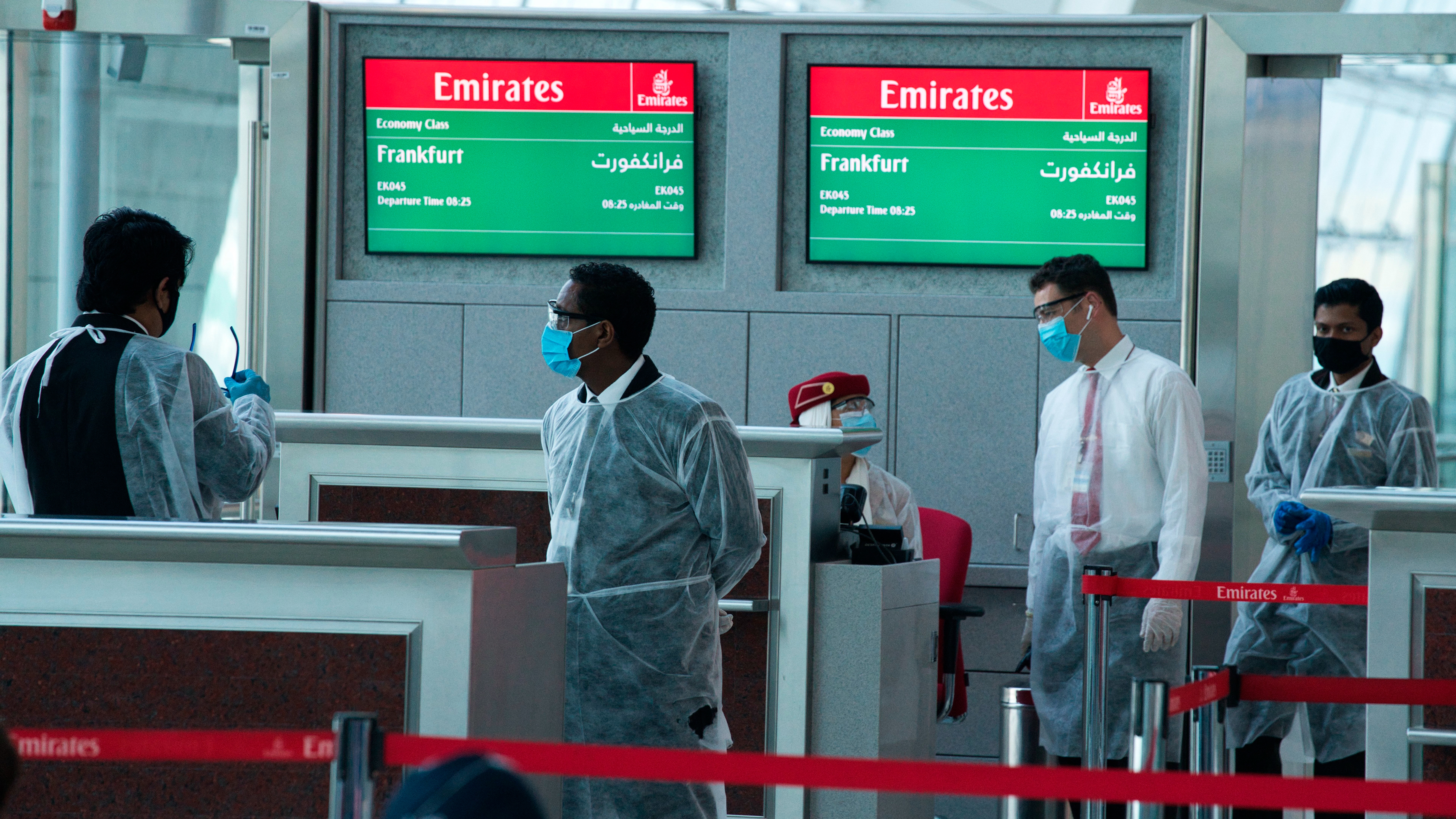 Once considered high flying jobs, pilots and flight attendants are now facing an unprecedented job crisis due to the coronavirus pandemic. With most flights still grounded, these skilled workers are being laid off, recommended to ask for early retirement, while others are still employed and face salary cuts. From the Dubai-based Emirates to American companies, no carrier has been left untouched.

"My last flight was at the end of February. After that, some colleagues did repatriation flights, but no one knew what was going to happen," a flight attendant working with Emirates told CGTN under anonymity.

Cabin crew salaries are composed of a base salary plus flight hours. With planes grounded, these professionals had only base salaries to live on. And those soon whittled as months passed.

By May, the first cut of 25 percent in Emirates came. In the flight attendants' case, the 4,000 Dirham (7,640 yuan) base salary went down to around 3,000 Dirham (5,730 yuan), and contracts ready for renewal, instead of the usual three years, were renewed for only two months.

In June, another cut sent wages down to half in a country where living expenses are high.

This marked the beginning of a layoff wave at Emirates, in which, according to the testimonial and several aviation websites, employees would receive an email, between 6 p.m. and 11 p.m., asking to be present in a "business update" meeting the next morning, at the training college. 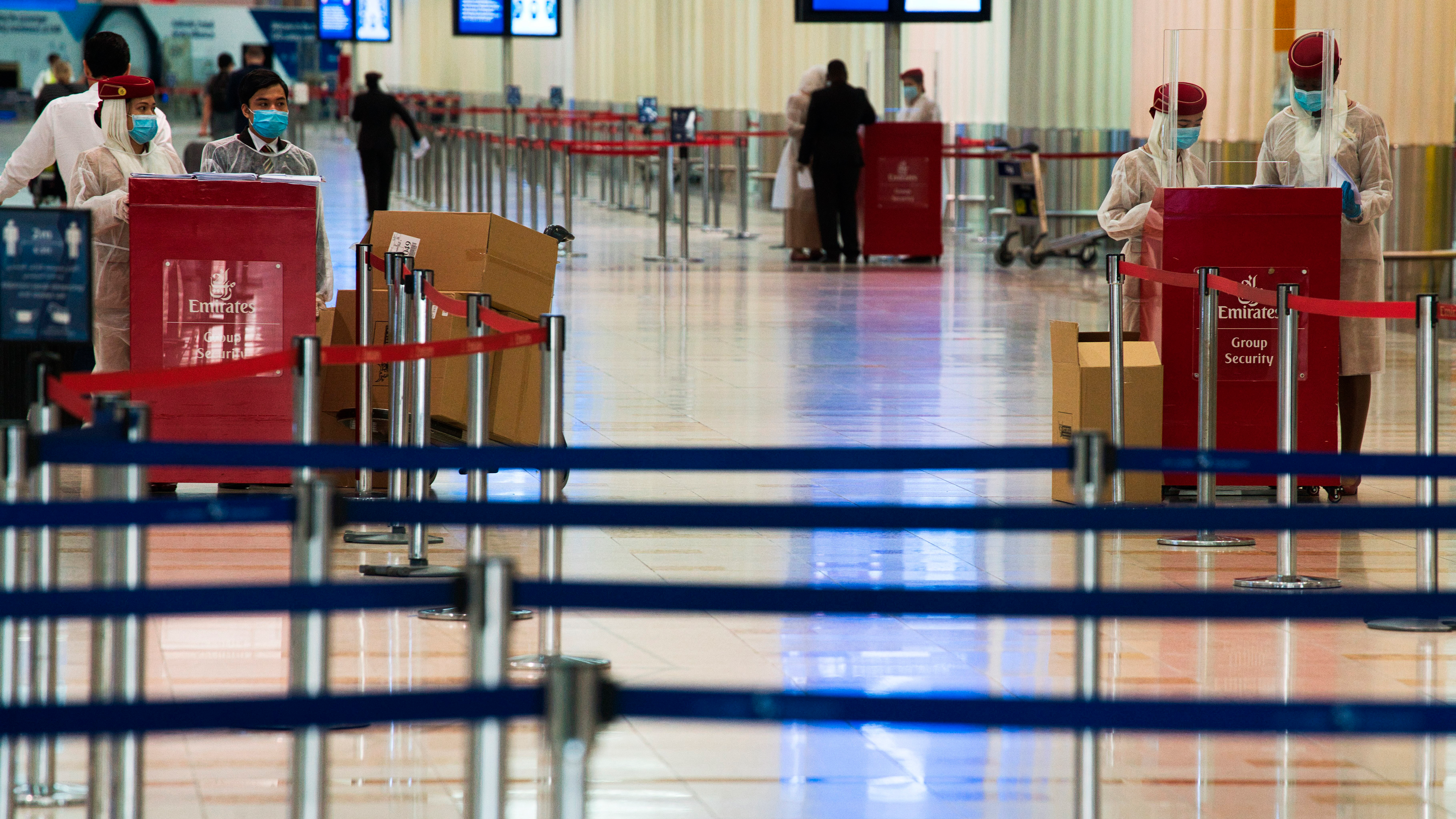 Employees of the long-haul carrier Emirates wearing masks due to the coronavirus pandemic prepare to greet passengers at Dubai International Airport. /AP

Employees of the long-haul carrier Emirates wearing masks due to the coronavirus pandemic prepare to greet passengers at Dubai International Airport. /AP

Upon entering the training college, they were greeted with extra security and afterward fired in person, only to leave through the backdoor where the garbage bins are.

"Everyone was very anxious. There was no warning. In the end, people that worked in the company for 15 years without any issues or warnings were also fired," the cabin crew member noted, adding that the firing letter uses the term "redundant."

The letter also includes a clause saying there is no possibility of rejoining the company, which for some staff might mean that future salaries might be lower when hiring restarts, or with fewer benefits.

"They always told us that we are the frontline of the company, and normally take good care of us. The way they treated people was a disappointment," the employee noted, considering the process was badly organized.

According to reports, during the first wave of redundancies, 180 A380 pilots undergoing training and 400 trainee cabin crew – all within the probation period – were dismissed. Then, employees with "warnings" under the three-level warning system (verbal, written, and final) were also fired.

In the second wave of dismissals, 400 Airbus A380 and 200 Boeing 777 pilots, as well as 6,500 cabin crew and some engineers, were dismissed. Since the Airbus 380 is the most expensive plane to operate, its pilots face a higher risk of being sacked or asked to leave.

In a previous statement, the company admitted: "We are continuously reassessing the situation and will have to adapt to this transitional period." This means that in the next few months, depending on how countries reopen and the sector rebounds, more layoffs might happen. 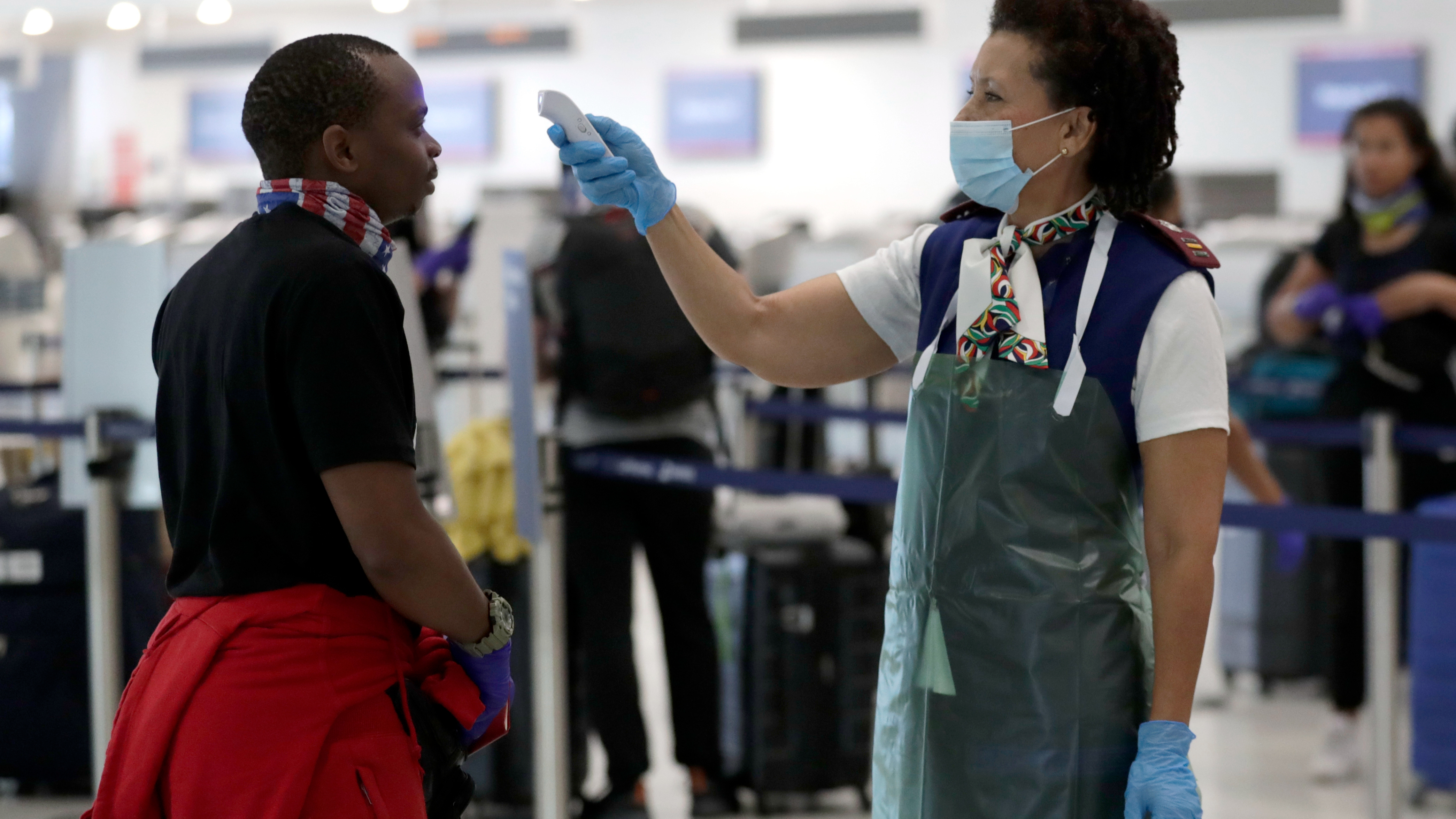 Rosemary Arends, a nurse and flight attendant for South African Airways (SAA), checks the temperature of a passenger before a charter flight from Miami International Airport to Johannesburg, Cape Town and Durban. /AP

Rosemary Arends, a nurse and flight attendant for South African Airways (SAA), checks the temperature of a passenger before a charter flight from Miami International Airport to Johannesburg, Cape Town and Durban. /AP

A drop in the ocean

Emirates is only one example and almost a drop in an ocean of layoffs. On Wednesday, Reuters reported that United Airlines is preparing to send notices of potential furloughs to 36,000 U.S.-based frontline employees, about 45 percent of staff.

Flight attendants are the most affected group with around 15,000 in line for potential layoffs – more than half of the airline's cabin crew. More than 2,200 pilots will also receive letters, CNBC said, adding that the company informed the workers that even though their jobs are at risk, there is a possibility of not everyone being dismissed, depending on how the sector recovers.

In response to CGTN Digital, Albert Tjoeng, International Air Transport Association (IATA) assistant director for corporate communications in the Asia Pacific, said the association doesn't have data on the layoffs.

On another note, Hunter Keay, aerospace analyst at Wolfe Research, considered that "airlines are staff heavy for this current market."

"Airlines have overhired during the past few years," Keay said, quoted by Flight Global.

U.S. furloughs are expected to happen after October 1 since bailout plans (25 million U.S. dollars) determine that forced layoffs and reduced hours are banned until September 30. 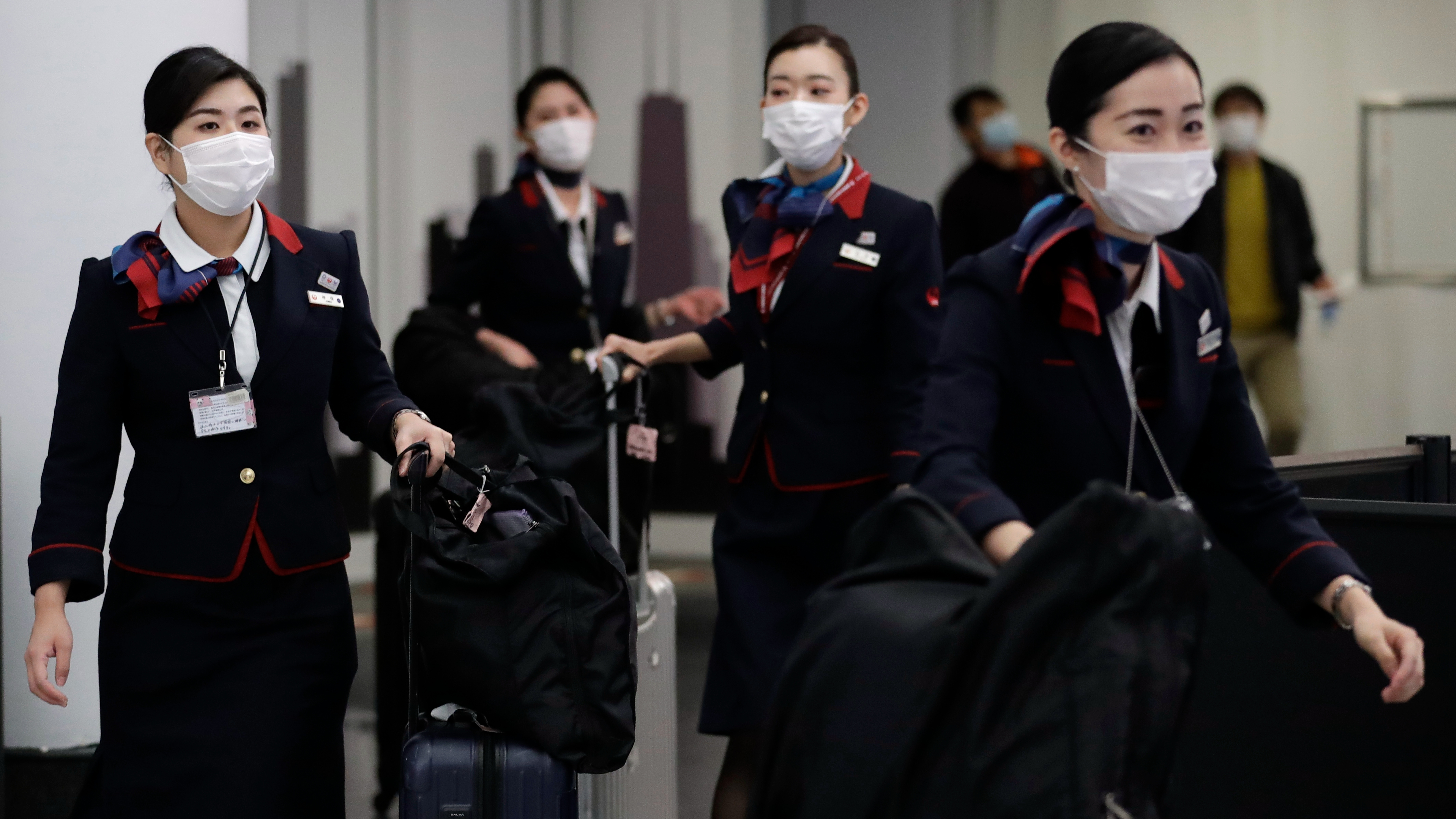 American Airlines told staff it had around 20,000 more employees than needed for the fall schedule, CNBC reported. Similarly, Delta showed 14,500 pilots that it expects to have 7,000 more than it needs, according to a memo quoted by Reuters.

Across the border, the Canadian Union of Public Employees (CUPE) Airline Division called for government support as approximately 11,000 flight attendants out of 15,000 are out of work.

In a press release, CUPE is proposing that the government work with the sector to allow flight attendants to work available shifts while receiving an Employment Insurance benefits top-up to survive the crisis.

On July 8, a group of around 200 ex-Etihad Airways cabin crew said to be planning to sue the Abu Dhabi-based airline for considering its redundancy program unfair and possibly illegal, cabin crew recruitment website Paddle Your Own Kanoo reported.

According to a previous calculation by Fortune, the pandemic has led to a total of around 70,000 job cuts in the top airlines. If other cuts in the sector suppliers are considered, like Boeing, that number goes up to more than 100,000.