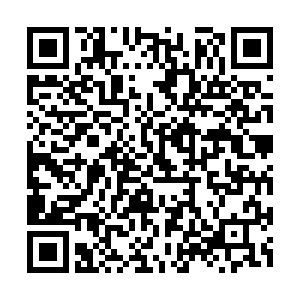 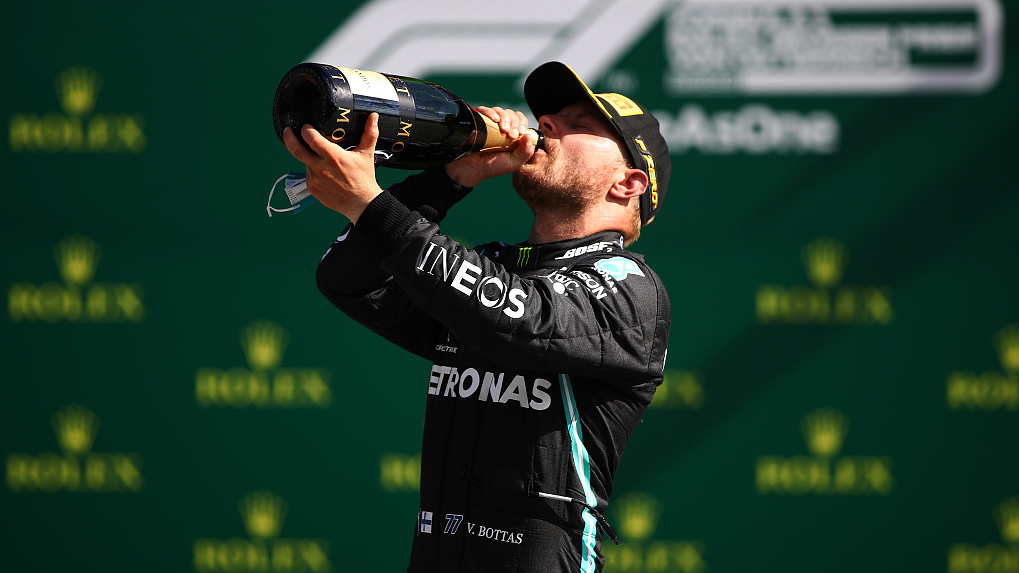 Valtteri Bottas can make Formula One (F1) history in Austria on Sunday as the first driver to win twice at the same circuit in a single season, but the Finn knows plenty can change in the space of a week.

For the first time a circuit is hosting back-to-back races – a situation resulting from the COVID-19 pandemic – and Bottas, winner of last Sunday's Austrian opener from pole position, has a good chance of doing the double.

The race will again be without spectators but those expecting race two to be the same as race one in all other respects are likely to be disappointed.

He then won the Azerbaijan race in April, Japanese race in October, and U.S. Grand Prix in November. He also finished second behind his teammate, Six-time world champion Lewis Hamilton, in many races last season.

Hamilton was hampered by both a three-place grid drop and time penalty last Sunday and that particular lightning is unlikely to strike twice.

The Mercedes team's gearbox problems did not surprise the team's engineering director Andrew Shovlin. Speaking at the F1 Nation podcast on July 7, Shovlin revealed they were anticipating the issues ahead of the race. 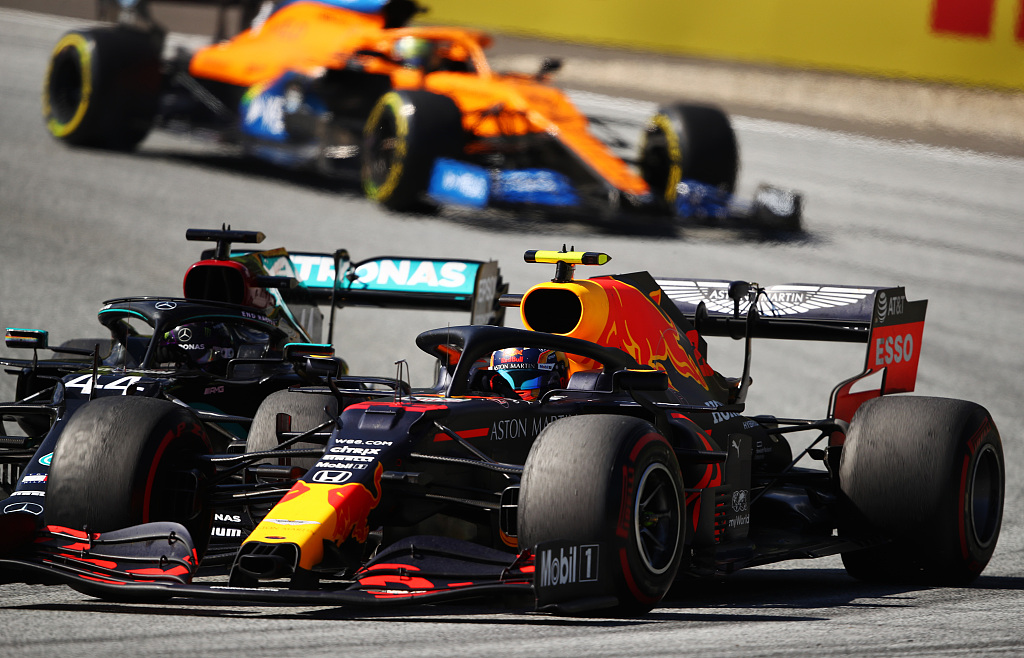 "On Friday (July 3) you saw that Valtteri had an issue at the end of one of the sessions so that was first a sign that we had a problem, we've had recurrence issues over the course of Saturday (July 4) and going into the race we were expecting it because it seems to be a feature of the model," he said. "So, at the moment if we build the car and run it this problem will appear at some point – it's just a question of how soon.

"It's not manifesting itself as one thing, no they are related it's basically a build-up of electrical noise that starts to interfere with the various systems so with Valtteri we saw that halfway through the race, got progressively worse, with Lewis it appeared later. But it's electrical noise that's then affecting a lot of different things.

"But every year this is a race of attrition and having it as the first race and then having two of them, one after the other because we think we can make some strides to improve some of our problems but others aren't going to get better on the same track. So a lot of people you’ve got another dose of it coming up, so it's a race against time to try and make a bit of headway into those complications."

"The reality is that we were fortunate to finish the race," Mercedes team boss Toto Wolff said of the electrical problems experienced last Sunday.

"Reliability caused us real concern and it is something we are working on as our highest priority.

"In a shorter season with a yet to be determined number of races, every point counts, so we need to improve quickly on that front." 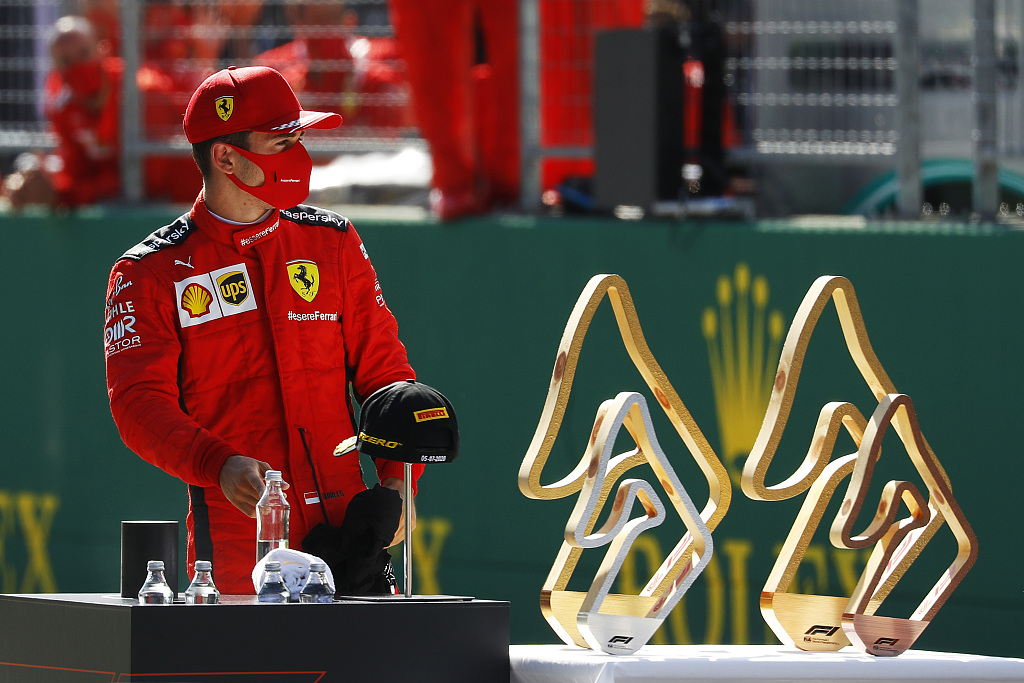 Ferrari are planning to speed up the introduction of upgrades to their under-performing F1 car after a difficult season-opening race as Charles Leclerc won the second prize on July 5.

The Italian team will bring the update initially planned for Hungary forward to this weekend's race also in Austria.

"The SF1000 (car) didn't measure up, even compared to expectations ahead of the event," said Ferrari in a statement. "Because of this, development has already been going on at full pace for some time.

"This is in the hope of bringing forward to next weekend the introduction of the aerodynamic package scheduled for the Hungarian Grand Prix – or, at least, some of its components." 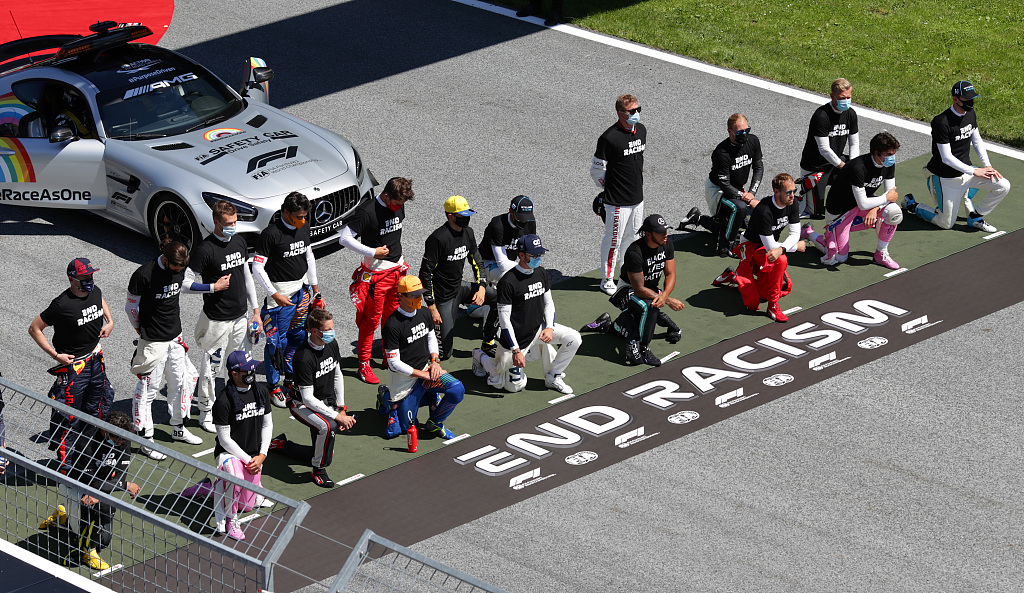 Some of the F1 drivers take a knee on the grid in support of the Black Lives Matter movement ahead of the Austrian Grand Prix in Spielberg, July 5, 2020. /VCG

Some of the F1 drivers take a knee on the grid in support of the Black Lives Matter movement ahead of the Austrian Grand Prix in Spielberg, July 5, 2020. /VCG

Red Bull's Max Verstappen, winner in 2018 and 2019 at his team's home circuit, and Alex Albon would have to be doubly unlucky to draw blanks for a second weekend in a row.

"Whatever we found wasn't perfect last weekend we can improve this week," said Verstappen.

"It looks like it could rain this week and I'm not sure anybody knows how competitive they are in the wet with these new cars so that could be interesting."

"One thing I've learned about race cars in 20 years or something of doing this, whether its go-karts or F1, is a track can change from one day to the next," said Renault's Daniel Ricciardo, who failed to finish last Sunday.

"A car can feel great one day and not great the next. Things can change... I'm not promising a completely different scenario but I wouldn't also promise the same. I wouldn't bet exactly on a copy-paste," added the Australian.