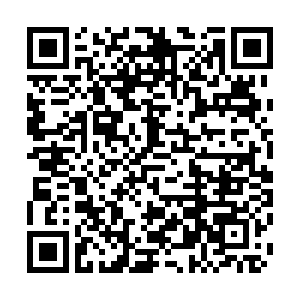 Champ-champ Henry Cejudo's shock retirement at UFC 249 on May 9 this year left a gaping hole in the UFC's bantamweight division. Even though nobody was happy with the stoppage, he had just handily defeated the returning Dominick Cruz, considered one of the best bantamweights of all time, and looked set to continue his reign as a dominant champion.

It had looked, at the time, that the following numbered event was designed to shake out Cejudo's next opponent. Sean O'Malley got onto the rankings by starching Eddie Wineland, the returning Cody Garbrandt looked like he put his past behind him with a KO of The Year contender against Raphael Assuncao, and in between, #2 Aljamain Sterling wiped the floor with then-#4, now #5 Cory Sandhagen. Surely that meant, somewhere down the line, the title would be contested between Sterling and top-ranked Marlon Moraes?

To believe that, you would have to believe Endeavor-era UFC is still a sport and not sports-entertainment. It's common knowledge that (a) the UFC are burning through events this year to meet their contractual obligations to ESPN, and (b) parent company Endeavor aren't as cash-rich as they would like to be and are relying on UFC income to pay the bills. That means it's more important for them to have big fights, rather than the right fights, explaining why the bantamweight title is going to be decided in about between Russia's Petr Yan and Brazilian Jose Aldo. 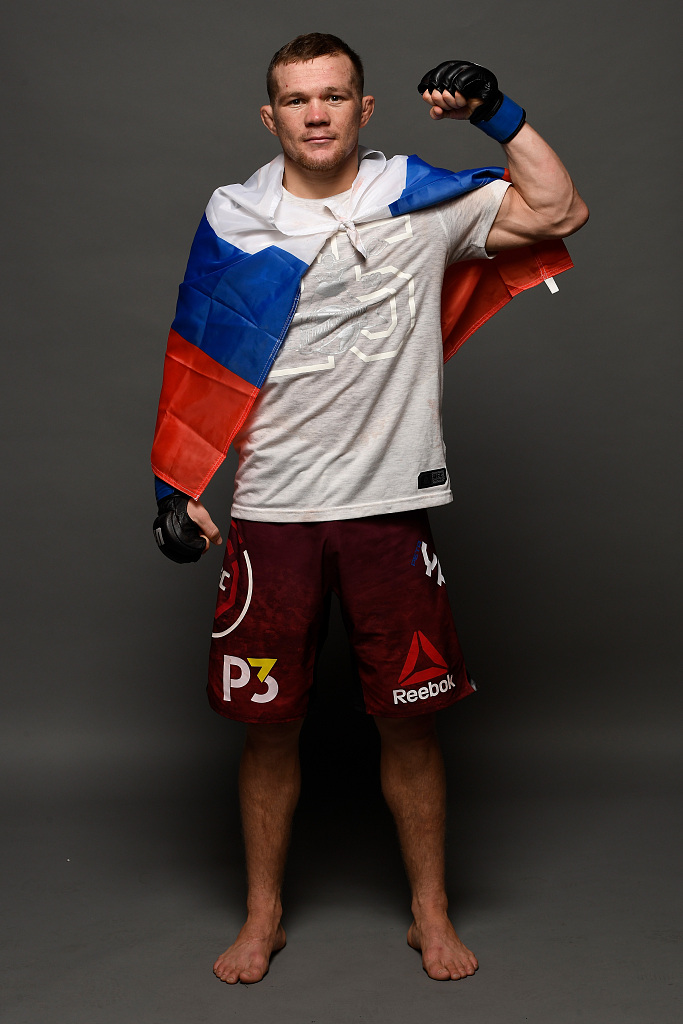 Petr Yan poses with the Russian flag backstage during the UFC 232 event at The Forum in Inglewood, California, December 29, 2018. /CFP

Petr Yan poses with the Russian flag backstage during the UFC 232 event at The Forum in Inglewood, California, December 29, 2018. /CFP

Yan's involvement makes sense. With a 14-1 record, which includes straight six wins in the UFC and the only loss being in a bantamweight tournament finale for Russia's Absolute Championship Berkut federation, the man nicknamed No Mercy is no joke. His aggressive, all-action fight style makes that clear. His most recent win was a curtailing of Uriah Faber's comeback dream with a three round dismantling that ended with a headlock knockout at UFC 245.

Speaking at the UFC's virtual media day, Yan said he watched a lot of tape to prepare for Faber and executed it perfectly on the night. That gives him the confidence to face anybody, and that includes his opponent at UFC 251. He was repeatedly asked if he thought the fight was fair and if Aldo was the right opponent, and he insisted that Aldo is a "legend of the sport" and that facing him is an honor.

While the Brazilian's status as an MMA legend is all but guaranteed - he personally thinks he's the third-best ever behind Georges St-Pierre and Anderson Silva or Jon Jones - his role in this title fight is highly suspect. For little over a decade, Aldo dominated the featherweight division and came into UFC 194 with a record of 25-1 – and that only loss came in a bout taken at lightweight. And then, he was knocked out in 13 seconds by a Conor McGregor. 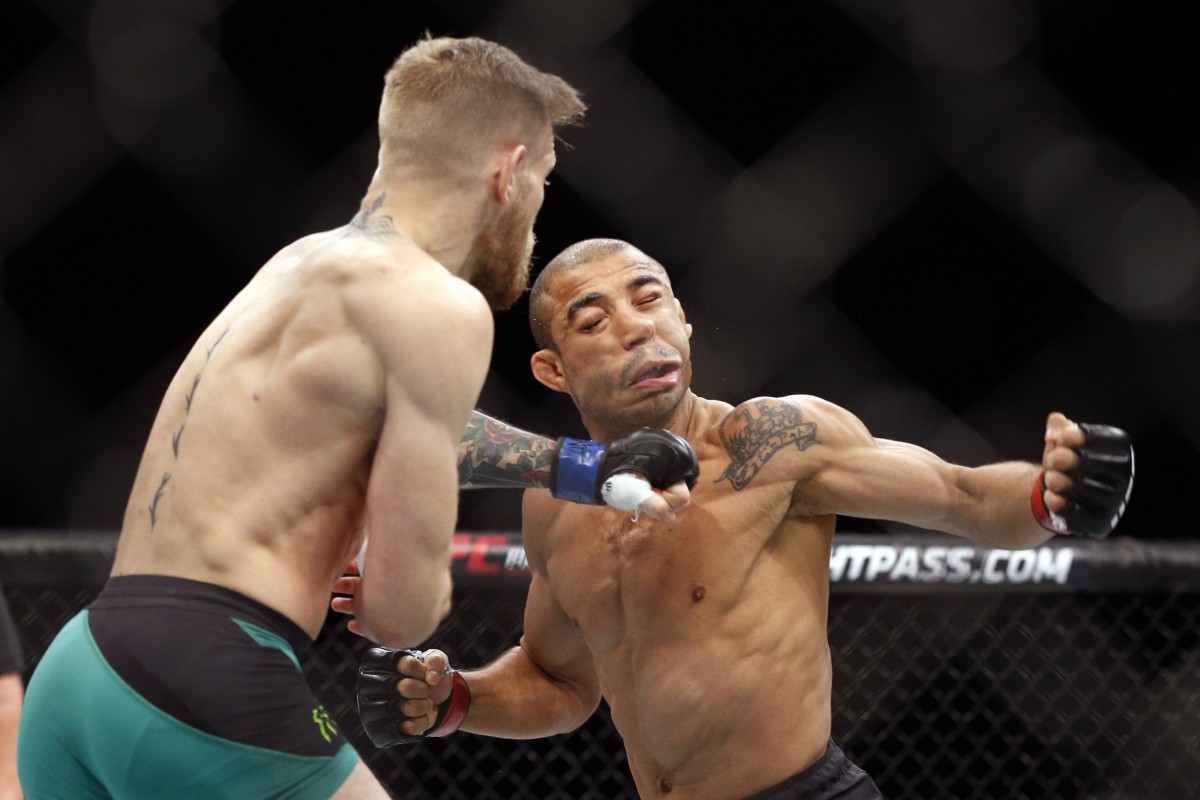 The left hook that knocked out Jose Aldo out in his UFC men's featherweight championship bout against Conor McGregor at the UFC 194 event at the MGM Grand Garden Arena in Las Vegas, Nevada, U.S., December 12, 2015. /AP

The left hook that knocked out Jose Aldo out in his UFC men's featherweight championship bout against Conor McGregor at the UFC 194 event at the MGM Grand Garden Arena in Las Vegas, Nevada, U.S., December 12, 2015. /AP

These are the losses fighters never recover from. Terry Etim retired from MMA within two fights of getting knocked out by a stunning Edson Barboza wheel kick – it's still featured in UFC highlight reels and is nicknamed the Statue of Liberty - Anderson Silva has a record of 1-8 since getting flattened by Chris Weidman, and Ronda Rousey admitted to being mentally and physically broken after she her defeat to Holly Holm.

Aldo hasn't been the same fighter since he lost to The Notorious either. Long gone are the days of 25-1. He went 3-3 at featherweight, suffering two TKO losses to "Blessed" Max Holloway and a definite decision loss to current champion Alexander Volkanovski. Worse, his three wins weren't entirely convincing: a post-prime Frankie Edgar, journeyman Jeremy Stephens and the relative unknown Renato Moicano who has since moved up in weight. 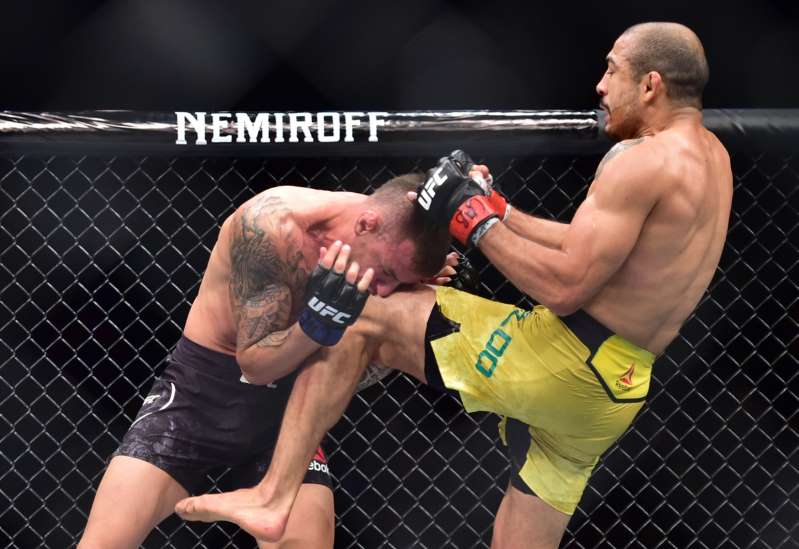 Jose Aldo smashes Renato Moicano with a hard knee in their featherweight bout at UFC Fight Night: Assuncao vs. Moraes at the Centro de Formacao Olimpica do Nordeste in Fortaleza, Brazil, February 2, 2019. /AP

Jose Aldo smashes Renato Moicano with a hard knee in their featherweight bout at UFC Fight Night: Assuncao vs. Moraes at the Centro de Formacao Olimpica do Nordeste in Fortaleza, Brazil, February 2, 2019. /AP

To the surprise of everyone, Aldo did the opposite and, in 2019, moved down in weight. Cutting weight gets harder as fighters age, so dropping a division in his 30s required is either the move of someone brave or stupid. At the weigh-ins for his bantamweight debut at UFC 245, it felt like the latter. Looking scarily gaunt on the scale – MMAmania.com compared him to Skeletor – and then fighting with a slower, weaker style than is usual for him in a split decision loss to Marlon Moraes, the drop felt like a move borne from desperation.

When talking about this fight against Yan, Aldo says he has everything figured out now, including his diet and his weight cutting regimen, and intends to win the bantamweight belt here and defend it regularly against athletes like Sterling, Garbrandt and more. Long ago, that would have sounded like a prediction, now, it sounds like a dream. For the UFC's bank balance, it could be – for the fighter himself, it might end up actually being a nightmare.