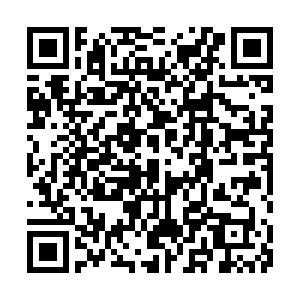 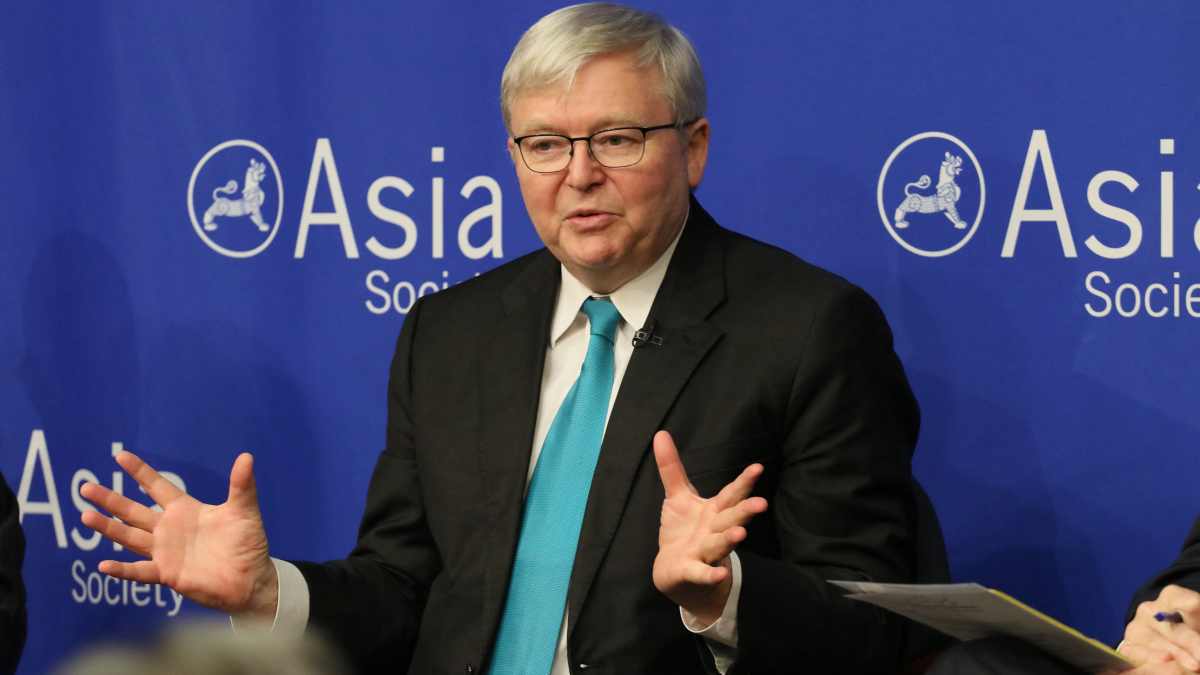 Editor's note: Kevin Rudd is the president of the Asia Society Policy Institute, New York. This is an edited transcript of Rudd's remarks to the Peking University China-U.S. Think Tanks Online Forum on July 9, 2020. The article reflects the author's opinions and not necessarily the views of CGTN.

It's good to be in this gathering and to follow Foreign Minister Wang Yi and Dr Kissinger.

I'm conscious of the fact that we have many distinguished Americans joining us today. Ambassador Stapleton Roy, former U.S. ambassador to China in the Bush Administration; Kurt Campbell, former Assistant Secretary of State for East Asia under the Obama Administration, who have occupied distinguished offices on behalf of the United States government in the past. Steve Orlins, president of the U.S. National Committee on U.S.-China Relations, together with other distinguished Americans, are with us as well. These individuals will have valuable perspectives from an American point of view. And as you know, I'm not an American, nor am I Chinese. So, what I will try to provide here are some separate reflections on the way forward.

We're asked in this conference to address the correct way forward for U.S.-China relations. I always love the Chinese use of the word zhengque, translated as "correct." I think the Chinese in the title of today's conference is Zhong-Mei Guanxi Weilaide Zhengque Fangxiang. Well, it depends on your definition of Zhengque or "correct." Within a Chinese Marxist-Leninist system, zhengque has a particular meaning. Whereas for those of us from the reactionary West, we have a different idea of what zhengque or "correct" happens to be.

Sustainable within Chinese domestic politics. China is about to have the Beidaihe meetings in August, where the U.S.-China relationship will once again be the central topic. "Sustainable" within U.S. domestic politics, both Republican and Democrat. A third criteria is, dare I add it, is sustainable for those of us who are third countries trying to deal with both of you. And fourthly, to do all the above without the relationship spiraling out of control into crisis, escalation, conflict or even war.

Now, as think-tankers, finding this intersecting circle between these four considerations is very difficult and perhaps impossible. We're in search of the new "golden mean," the new zhongyong in U.S.-China relations. But I believe it's worth the effort.

My first point is we need to understand clearly why the U.S.-China relationship is now in its most volatile condition in 30 years – and perhaps 50 years. I think we need to agree on three mega-changes that have been at work.

Number one: the changes in the underlying power structure of this relationship, that is the balance of power between the U.S. and China because of China's rise. Those of us on the American side here who read the Chinese strategic and political literature know that this is openly discussed in China. That the shili pingheng has changed. And therefore this, in China's mind, provides it with greater opportunity for policy leverage.

The second reason for the change is that those of us who observe China closely, as I've done for my entire professional life, have seen significant changes since the Central Party Work Conference on Foreign Affairs held in December 2013. And since then, China's international policy has become more activist and more assertive across strategic policy, economic policy and human rights policy in this new age of fenfayouwei, and no more an age of taoguangyanghui or "hide your strength, bide your time." We understand that change, and we watch it carefully.

But this third structural factor associated with Trump will not change 180 degrees with Biden. It will change in tone. But my observation is that under Biden the substance is likely to be systematic, strategic competition rather than episodic strategic competition (as we have had with Trump), but with the United States under Biden still willing to work with China on certain defined global challenges like pandemics, like climate change and possibly global financial management.

My second point is there can be no return, therefore, to previous strategic frameworks for managing a sustainable or kechixu U.S.-China relationship in the future. Therefore we need to develop a new framework for doing that. I'm not talking about throwing away the three communiques (from the 1970s, outlining the foundations of the U.S.-China relationship). I'm talking about building something different based on the three communiqués.

I often read in Chinese literature that Beijing hopes the United States will recognize its errors and return to a "correct" understanding of the U.S.-China relationship and resume the past forms of strategic engagement. For the reasons I've outlined, already, that will not happen.

Take one most recent example. China's decision to enact the national security law in Hong Kong is seen in Beijing as a matter of national sovereignty; in 1997, sovereignty was transferred from Britain back to China, and that's the end of the argument. But the essential nature of the American democracy does not permit Washington to see it that way. And hence the reaction from other Asian and Western democracies, which is likely to intensify over the coming months. This is just one example of the much broader point of the changing deep structure of the U.S.-China relationship.

As I said before, the U.S.-China relationship must remain anchored in the three communiqués, including the most fundamental issue within them, which is Taiwan. But a new organizing principle, and a new strategic architecture for a sustainable relationship, is now needed.

This brings me to my final point: some thoughts on what that alternative organizing principle might be for the future.

We might not yet be in Cold War 2.0 but, as I've written recently in Foreign Affairs magazine, I think we're probably in Cold War 1.5. And if we're not careful, we could end up in 2.0. But there are still lessons that we can learn from the U.S.-Soviet relationship and the period of détente. The doors are shut of the J. Crew Mens Shop in New York City U.S. during coronavirus pandemic, May 1, 2020. /AP

The doors are shut of the J. Crew Mens Shop in New York City U.S. during coronavirus pandemic, May 1, 2020. /AP

One of these lessons is in the importance of internal, high-level communication between the two sides that there should be an absolutely clear understanding of the red lines which exist, in particular on Taiwan. By red lines, I do not mean public statements from each other's foreign ministries as an exercise in public diplomacy. I mean a core understanding about absolutely core interests, both in the military sphere but also in terms of future large-scale financial market actions as well.

Within this framework, we also need a bilateral mechanism in place to ensure that these red lines are managed. And that's quite different to what we have at present where we seem to be engaged in a free voyage of discovery, trying to work out where these red lines might lie. That's quite dangerous. So to conclude, mutually agreed red lines, both in the military and the economic sphere.

But of course, that's not the totality of the U.S.-China relationship. But they do represent a foundation for the future strategic framework for the relationship. As for the rest of the architecture of the "managed strategic competition" that I speak of, my thoughts have not changed a lot since I wrote a paper on this at Harvard University, at the Kennedy School, about five years ago. I called it "constructive realism" or jianshexing de xianshizhuyi.

There I spoke about number one, red lines where no common interests exist, but where core interests need to be understood; two, identifying difficult areas where cooperation is possible, for example, like you (both the Chinese and American sides) have recently done on the trade war; and three, those areas where bilateral and multilateral cooperation should be normal, even under current circumstances, like on pandemics, like on climate change, and like making the institutions of global governance operate in an efficient and effective way through the multilateral system, including the WHO.

And, of course, if this framework was to be mutually accepted, it would require changes on both sides – in both Washington and Beijing. But it will also require a new level of intellectual honesty with each other at the highest level of the relationship of the type we've seen in the records of Mao's conversations with Zhou Enlai and with Kissinger and Nixon and those who were party to those critical conversations half a century ago. The framework I've just outlined is not dissimilar in some respects to what Foreign Minister Wang Yi spoke about just before.

I'm also conscious that in the United States, there are huge domestic challenges leading up to the U.S. presidential elections – Black Lives Matter, COVID-19 – and I'm deeply mindful of Lincoln's injunction that a house divided among itself cannot stand.

But I'm also mindful of China's domestic challenges. I'm mindful of what I read in the People's Daily today about a new zhengdang, a new party rectification campaign. I'm also mindful of traditional Chinese strategic wisdom, for example, in the days of Liu Bang, Xiang Yu and shimian maifu or the dangers of "having challenges on ten different fronts at the same time."

So much wisdom is required on both parties. But I do agree with Jiang Zemin and his continued reminder to us all that the U.S.-China relationship remains zhongzhong zhi zhong or "the most important of the most important." And if we don't get that right, then we won't be able to get anything else right.