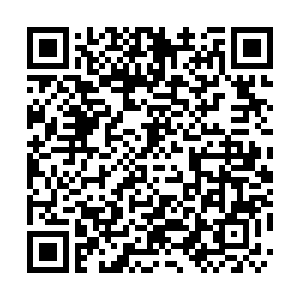 They say never to start the show with the showstopper, but this was the inverse. The main event was always going to be based around who could implement their game plan best, and "The Nigerian Nightmare" Kamaru Usman imposed his suffocating style in Round 1 and never let up. 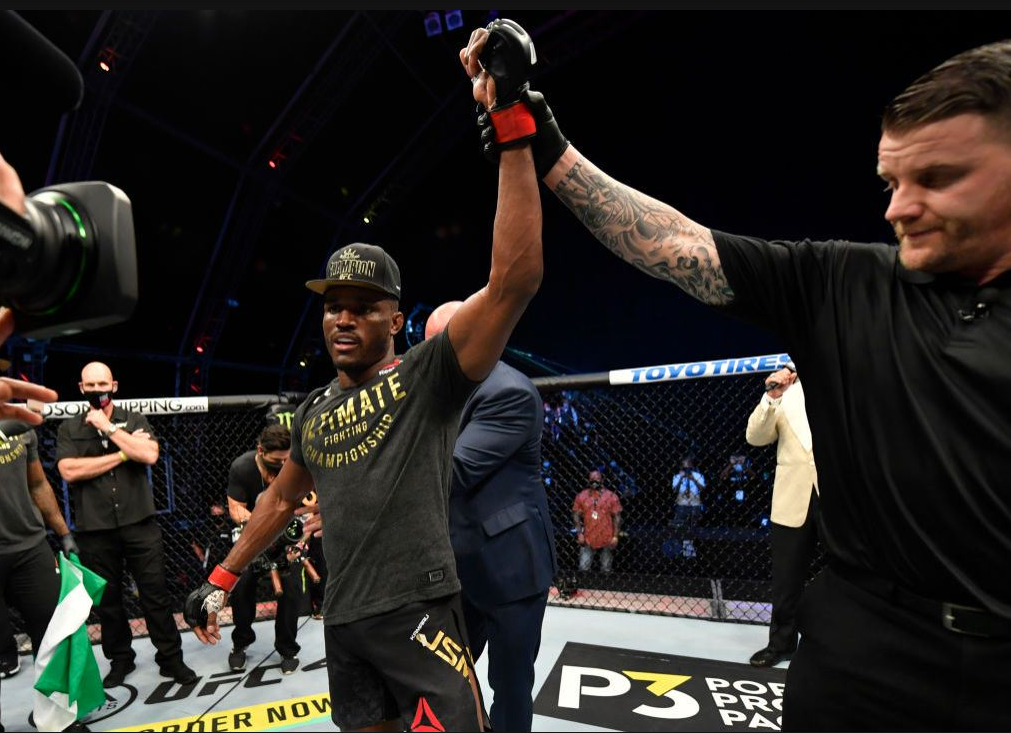 Jorge "Gamebred" Masvidal, though only officially in the fight on six days' notice, had clearly planned for Usman's Greco-Roman grappling and, overall, did just enough to prevent the champion from inflicting damage, but all that did was lead to 25 minutes of lay-and-pray, the likes of which haven't been seen in the Octagon since the dog days of Jon Fitch.

When the fight was standing, Masvidal landed several hard shots. It wasn't enough, however, and Usman ultimately landed more significant strikes through his clinch work.

While the champion did enough to handily win the fight, he lost the story. Usman is currently tied with Georges St-Pierre for most welterweight wins and this highlights the difference in legacy: GSP is rightfully considered the greatest fighter of all time. Usman, even now as champion, feels like a forgotten man.

The narrative coming into Fight Island was how Gilbert Burns ran through former welterweight champion Tyron Woodley so easily at UFC on ESPN on May 30 that he was fresh enough to face Usman for the title only six weeks later. Then, when he had to pull out due to a positive COVID-19 test, all eyes turned to new opponent Masvidal, a flamboyant character coming off a 2019 full of highlight reel moments. Usman is winning – he's now undefeated in 15 contests – and in sport, that's ultimately the most important part, but a champion shouldn't be consistently overshadowed by his challengers.

Heading into the UFC men's featherweight championship rematch, both champion Alexander "The Great" Volkanovski and #1 Max "Blessed" Holloway promised changes: the champ promised a different strategy, the challenger claimed he'd only trained by Zoom. From the opening bell, this was a very different fight – and not in the ways anybody expected. 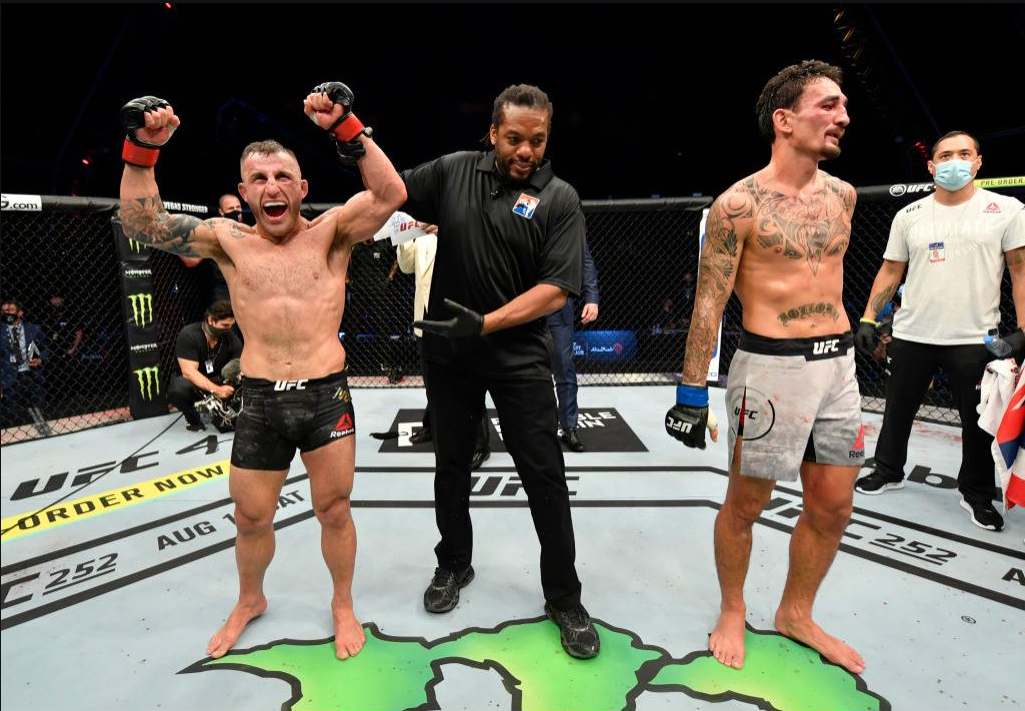 Holloway was more aggressive from the jump and maintained Octagon control for two whole rounds. Volkanovski's new tactics were unclear besides for and, in Round 1, Holloway landed a head kick that caused The Great to wobble. He looked like the superior man in Round 2 too by finding his range, chaining solid combinations and even dancing a little; Blessed's mojo was back.

Then in the third frame, Volkanovski struck back. In the first two, they were tied in significant strikes – 19 each, then 22 to 21 for The Great – but then Volkanovski poured it on, landing 25 to 15, and doing damage with each one. He also began utilizing the inside leg kicks again and this opened up the bout to the only new aspect of Volkanovski's plan: takedowns.

One attempt failed in Round 3, he landed one in Round 4 and two in Round 5. Each time, Blessed was only down for a few seconds, but the champ maintained his pace and it was enough for two of the judges. Volkanovski wanted to finish Holloway to confirm that he was the better fighter and instead ended up with a narrower win than their first encounter. However, now officially 2-0 over Blessed, there can be no doubt in anybody's mind who the best featherweight fighter in the world is right now.

It isn't often that a title fight feels like a foregone conclusion but, even ignoring "Scarface" Jose Aldo's run of poor form, simply looking at the two fighters at the weigh-ins, Petr "No Mercy" Yan looking fit and healthy, Aldo agitated and with the skin of his skull looking remarkably tight, it was clear who was in better condition. 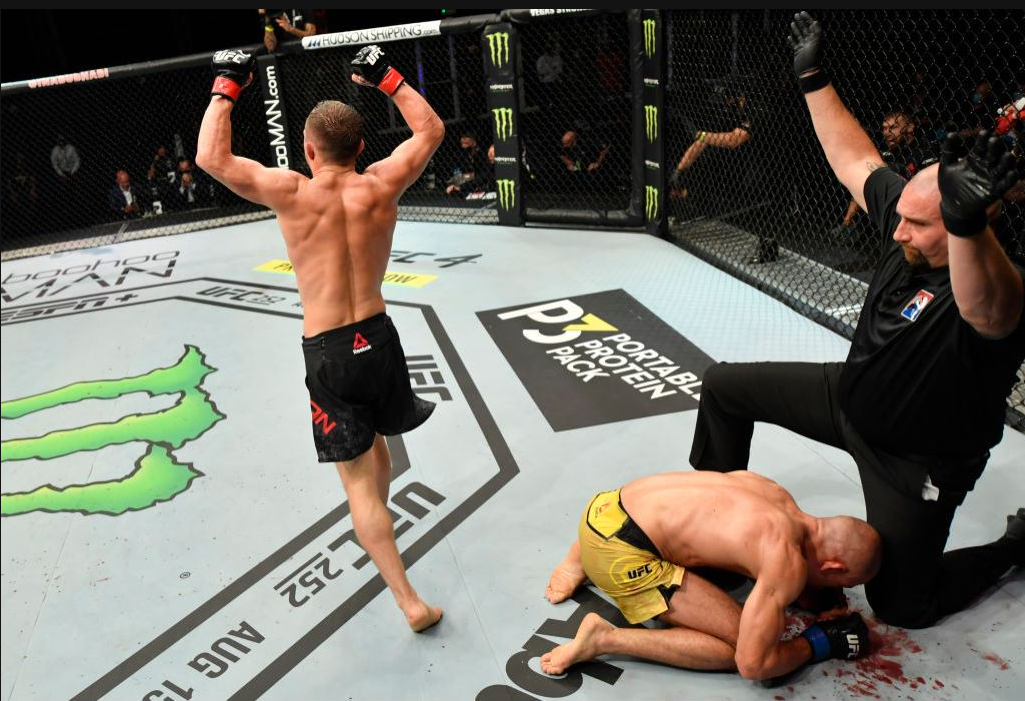 Aldo may claim his loss to Marlon Moraes in his bantamweight debut was due to weight cut difficulties that have been sorted, but that isn't reflected in his performance. The only part of his game that he hasn't lost since he was on the receiving end of a 13-second KO to Conor McGregor is the most Brazilian, his kicks, and he utilized several powerful ones to keep Yan off balance and at distant in the opening rounds.

His boxing is still fairly sharp too, but when compared to the younger and more natural bantamweight, he palpably lacks power. Most exchanges with Yan ended with his head snapping in one direction or another.

His most successful asset in the fight was referee Leon Roberts. At the end of Round 1, Aldo was on his back and being pulverized by Yan's ground-and-pound, which included a hard left to the body that created a welt visible throughout the remainder. Had the fight ended there, nobody could have argued against it.

However, it continued with Aldo getting pieced up in Rounds 2, 3, 4 and then, in Round 5, he got instantly rocked by a savage one-two and turtled up on the floor. He stayed on the ground for three minutes as Yan rained punches, knees and elbows onto his head.

The rules state that the referee can keep a fight going as long as the person on the receiving end of the strikes or submission attempt are intelligently defending themselves. Aldo's defense consisted of covering his head and staying still. Roberts gave him plenty of rope to hang himself with. To make matters worse, he was bleeding so heavily and having his movement so clearly controlled by Yan that he appeared to be painting the canvas red with his own blood.

When Leon Edwards finally deigned himself to ending the massacre, Aldo stayed kneeling on the floor, head in hands. Yan has sent a message to the division he is now champion of: No Mercy is not just a nickname.