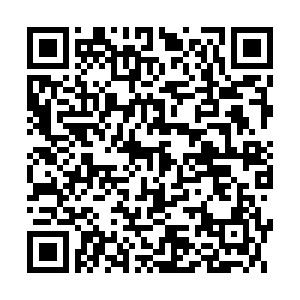 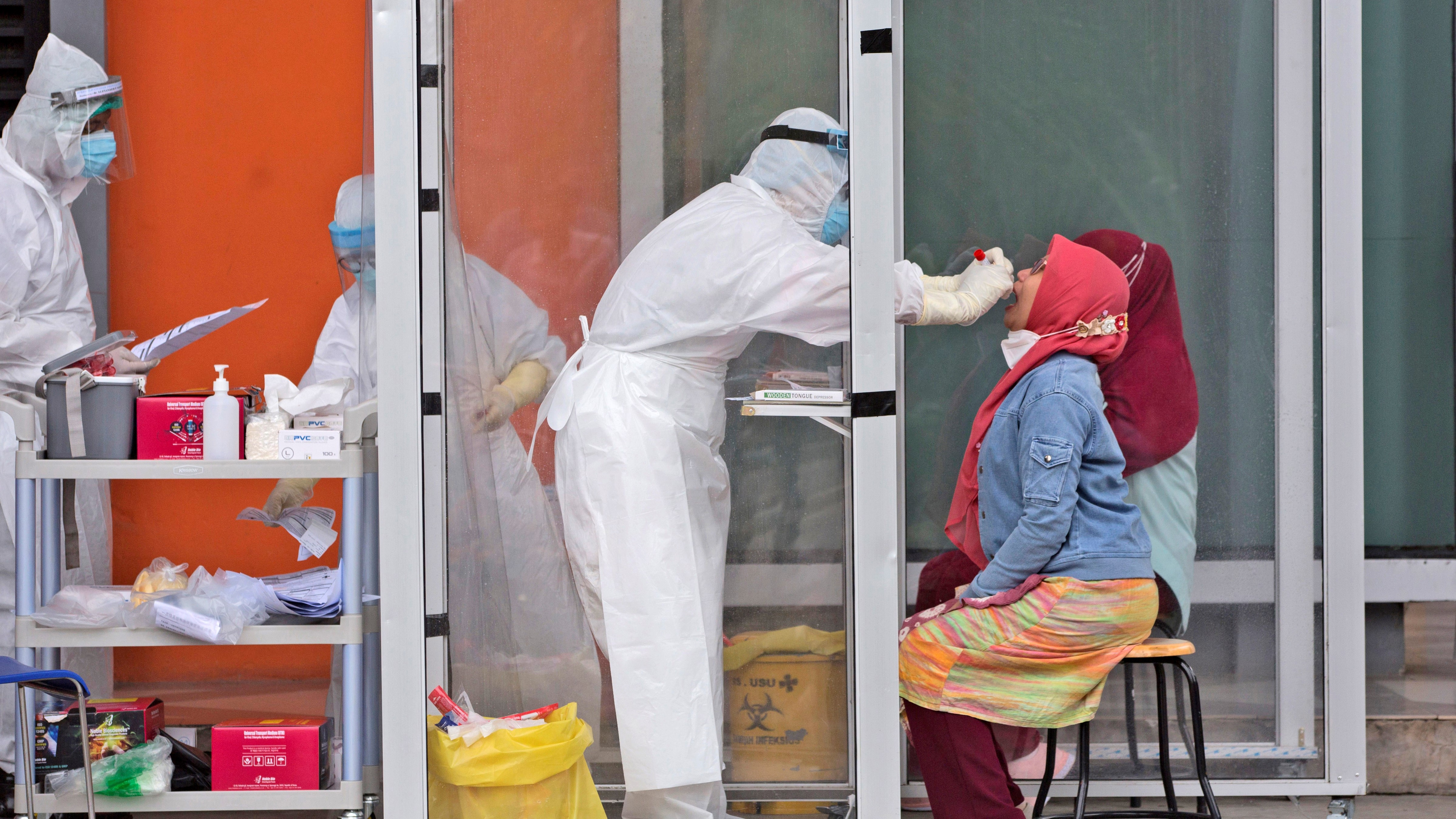 Indonesia, the world's fourth largest country in terms of population, continues to grapple with ever rising cases of COVID-19, with officials warning that authorities may need to again "pull the emergency brake" and reimpose restrictions to contain the spread.

On Wednesday, the health ministry reported 1,522 new confirmed cases, bringing the national total to 80,094 since the virus was first detected in the country in March. Eighty-seven more people died, with the total death toll standing at 3,797, making it the worst hit country in southeast Asia.

And it's far from over yet. President Joko Widodo said on Monday that the epidemic is not expected to peak before August or September, months later than previously hoped, national Antara news agency reported.

"If we don't do something the numbers could be different," Widodo warned further.

Earlier government predictions had expected a peak in May or June. Modelling by the University of Indonesia has meanwhile indicated cases could continue to rise until September or October.

In recent weeks, the country has seen record daily rises or death tolls, even as neighbors like Singapore and Malaysia have brought the epidemic under control.

The virus has spread to all 34 provinces, with East Java and the capital Jakarta worst hit, followed by South Sulawesi, Central Java, West Java, and South Kalimantan.

Over the weekend, it was announced that 1,280 cadets and staff had tested positive at a military academy in West Java – Indonesia's most populous province.

Meanwhile, top officials have made headlines after issuing controversial advice, including Agriculture Minister Syahrul Yasin Limpo who recommended wearing a eucalyptus necklace for 30 minutes to help get rid of the virus. The ministry later backtracked, saying the product, which it was developing, was mainly for aromatherapy.

A top official on the island of Lombok also ordered female civil servants to wear a face veil, or niqab, to protect against COVID-19. This prompted concerns that authorities were trying to push stricter religious dress codes under the guise of health and safety precautions, with women's advocates noting that a face veil is to loose to afford proper protection. Indonesia has a majority Muslim population but most women only wear a headscarf that does not cover the face. 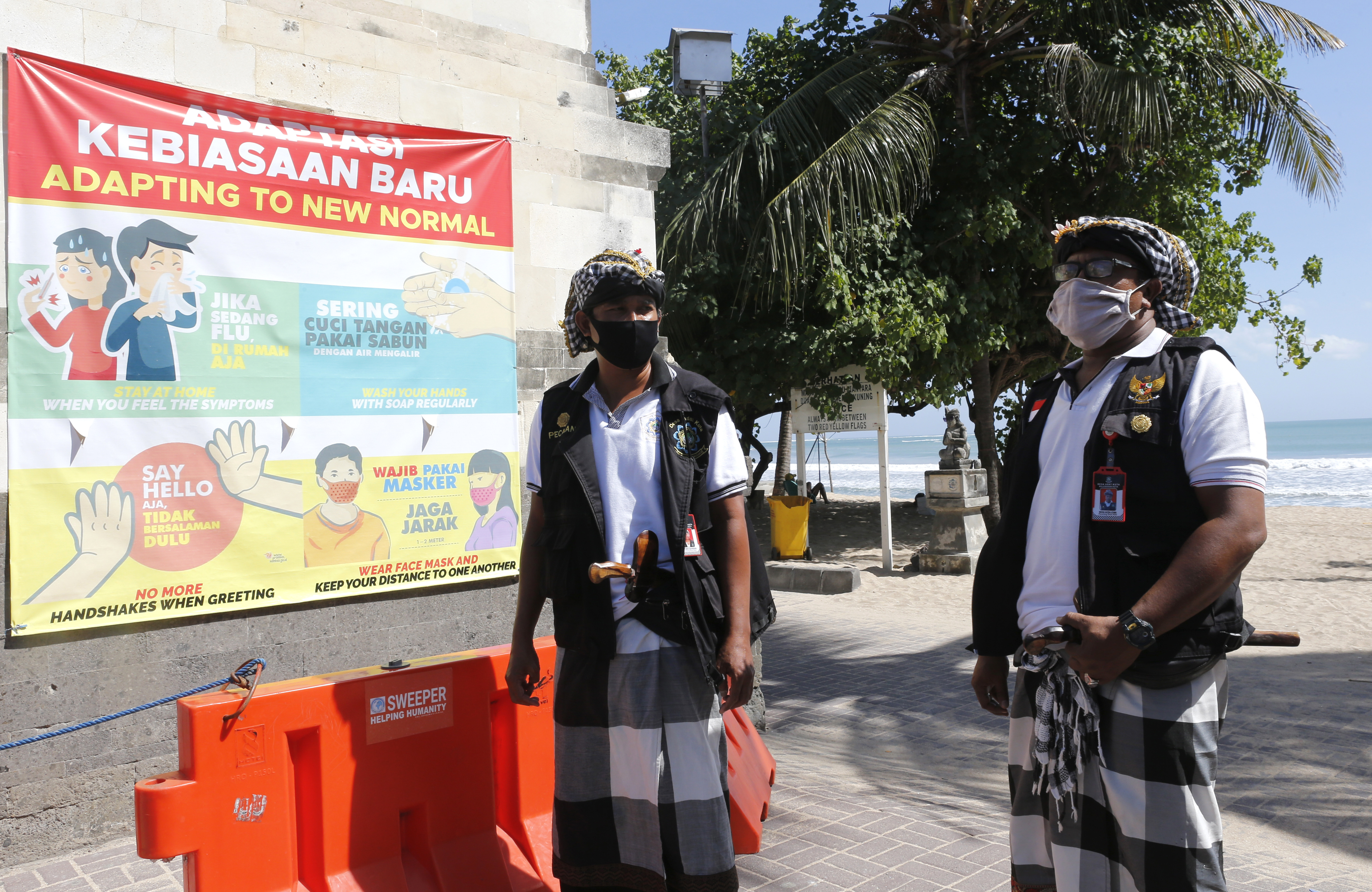 Local security men, wearing face masks as a precaution against the new coronavirus, guard an entrance to a beach in Bali, Indonesia, July 15, 2020. /AP

Local security men, wearing face masks as a precaution against the new coronavirus, guard an entrance to a beach in Bali, Indonesia, July 15, 2020. /AP

Why are cases still rising?

Indonesia closed schools and restricted travel early on in the epidemic but never implemented a nationwide lockdown, with regional and local authorities instead implementing large-scale social restrictions, known as PSBB, with approval from the ministry of health – including bans on large gatherings, orders to work from home and limits on public transportation.

Fears about the economic impact on businesses and jobs however led to a push to reopen restaurants, malls, tourist sites other public places in June. "We want the wheels of the economy to keep rolling," Widodo noted.

Meanwhile, health experts have deplored poor public communication and a lack of awareness about the risks and the safety measures to take – such as wearing a mask, regularly washing one's hands and practicing social distancing – among parts of the population.

A survey by Lapor Covid19 and Singapore's Nanyang Technological University Social Resilience Lab found that 16 percent of Jakarta residents interviewed thought economic considerations were more important than health, and 13 percent were prepared to risk infection for economic reasons, according to The Jakarta Post.

Even after the World Health Organization called for more testing in Indonesia, the country still lags behind other regional partners in terms of tests administered.

There have also been reports of people refusing to be tested, for fear of being stigmatized, losing their job or having to go to hospital if they do so.

Now authorities are mulling whether to reintroduce tough measures to stem the spread of the epidemic.

Over the past week, Jakarta registered a record high number of cases on three separate days, prompting Governor Anies Baswedan to warn that authorities may have to "pull the emergency brake" and once again impose strict PSBB measures.

"If that happens, we all have to go back home, and economic, religious and social activities will be halted," he warned, adding: "Do not take this lightly."

National COVID-19 task force chief Doni Monardo echoed this warning on Monday, noting that the government's position was that: "If cases surge, then pull the brake," but adding this should be done "proportionally," with a time limit and restrictions on what activities and how many people were affected.