A travel ban on Chinese would be irrational, irresponsible and wrong
Yuan Sha 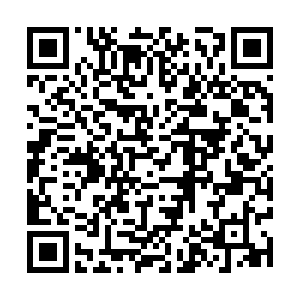 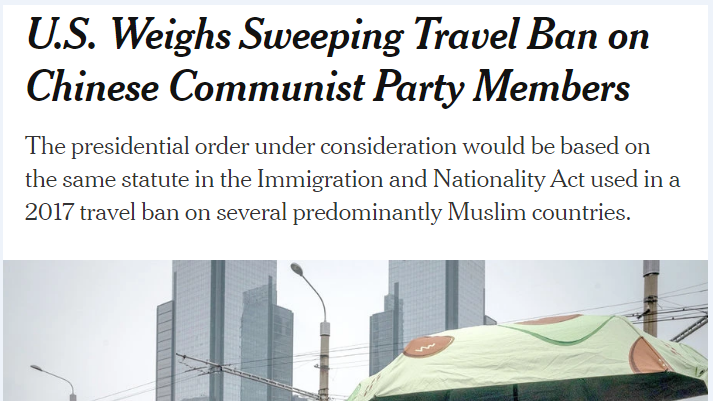 In an astonishing New York Times article, the U.S. government is said to be considering a sweeping travel ban on all Chinese Communist Party (CPC) members and their families and an expulsion of those who are already in the States. Such a plan would send the already frozen bilateral relations into a further lasting freeze.

The Trump administration is known for its unpredictability. But such a move would be even more unreasonable that it looks like coming out of a temper tantrum rather than a thoughtful and responsible calculation.

First, it would be a mission impossible. How to verify the party affiliation of a Chinese? Will the U.S. embassy go through background checks of every Chinese visa application? Or will the U.S. intelligence community hack into CPC database by cyber-attacks? Will the U.S. interrogate every Chinese in the U.S.? This move would immediately raise legal issues and meet with opposition and condemnation from politicians, business community, universities and ordinary Americans.

Second, it would be futile. The Trump administration might purposefully leak this information to the media, spreading concern, but such a bullying tactic has no chance of bending China to its will and would only provoke reciprocal actions from China and dramatic escalation of tensions with China. It would also deal a heavy blow to the sagging global economy and a setback to international order.

Last, it would be self-defeating. Contrary to the illusion of harming China, this move would only end up hurting the U.S. itself. This news, even if it is just bluster, would make Chinese travelers, businessmen and students think twice before making their plans to the U.S. to avoid discrimination and arbitrary detention and expulsion. It would tarnish the U.S. reputation as a reliable travel destination and hurt the U.S. economy.

Irresponsible act for China and the world

The Trump administration has initiated a series of travel restrictions on other countries during the COVID-19 pandemic.

Recently, it has imposed a flurry of targeted visa sanctions on Chinese nationals ranging from journalists to government officials. Lately, the U.S. State Department announced additional visa restrictions for employees of Huawei and other Chinese tech companies.

With the goal of decoupling China, this administration has already stigmatized Chinese students and scholars as "nontraditional spies." It has mounted a McCarthyist witch-hunt in the academic circle of anyone with China connections and even taken steps to terminate the Fulbright program with Chinese mainland and Hong Kong.

Now, this sweeping travel ban on all CPC members would be a further escalation of tensions. It is reminiscent of the hysteria era when the China Exclusion Act and the Red Scare during the Cold War had taken place.

Amid the raging pandemic, a slumping economy and rising social tensions at home, the Trump administration is expected to go all out on the China-bashing strategy leading up to the November election. But such a tactic may get things totally wrong.

It may get the CPC wrong. The U.S. is trying to draw an artificial line between the CPC and the Chinese people. However, in reality, the CPC is a political party composed of Chinese leadership as well as ordinary Chinese people with different ideas and lifestyles dedicated to make their country a better place. 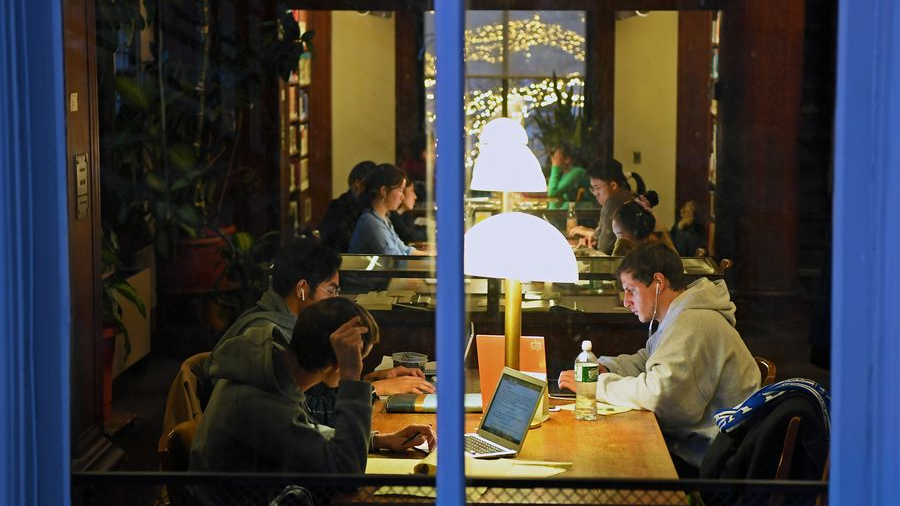 Students study at a library of Columbia University in New York, the United States, December 7, 2019. /Xinhua

Students study at a library of Columbia University in New York, the United States, December 7, 2019. /Xinhua

It may also get the U.S. wrong. The U.S., as said in its creed, is a country built on openness and freedom. But this move counters that spirit. It would also encourage racial discrimination and hate crimes in the U.S., which is detrimental to its own social stability.

Therefore, it would undercut American identity and undermine American prestige. It would also make the U.S. a destabilizing force and a revisionist power.

It may also get the China-U.S. relations wrong. People-to-people ties are strong between the two countries. Tens of thousands of people would travel between China and the U.S. every day before the pandemic.

According to data from the 2019 Open Doors Report, for the tenth consecutive year, China remained the largest source of international students in the United States in 2018/19 with 369,548 students, making up the largest international student body in America. These robust exchanges have served as a positive force for mutual understandings between the two countries.