The complicated case of Libya and its militias
Guy Burton 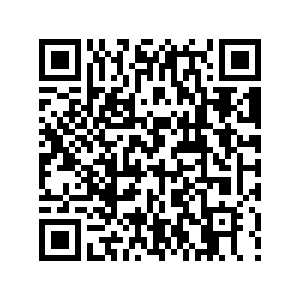 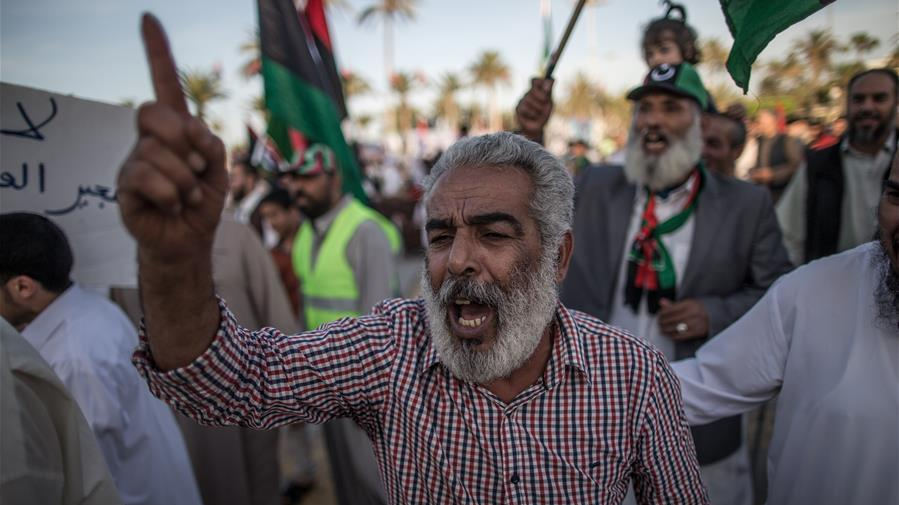 A protest against the military offensive led by Libyan National Army commander Khalifa Haftar at Martyrs' Square in Tripoli, Libya, May 17, 2019. /Xinhua

A protest against the military offensive led by Libyan National Army commander Khalifa Haftar at Martyrs' Square in Tripoli, Libya, May 17, 2019. /Xinhua

Viewed from above, the Libyan conflict has looked like a battle between two main groups, the Government of National Accord (GNA) in Tripoli and General Khaled Haftar's Libyan National Army (LNA) based in the east of the country. But the reality is far more complicated than that, with a myriad of different and locally-based militias doing much of the fighting.

Much of the current image of Libya – as a struggle between the GNA and Haftar's LNA – is a creation from media reports, especially coverage relating to the international community's response to the conflict.

This perspective dates back to 2014, when in the aftermath of the uprising and overthrow of the Gaddafi regime three years earlier, a transitional and weak central government was dominated by Islamists and revolutionaries. That year Haftar announced his campaign against Islamist militants and the national government, starting in the city of Benghazi.

In June 2014, elections were held for a new parliament. Comprising fewer Islamists and revolutionaries, it established itself in the city of Tobruk, in part to open up the country's east. Back in Tripoli, meanwhile, several of the militias based there reconvened the previous rump government and contested the status of the parliament.

During 2015, the UN sponsored talks in an effort to resolve the country's separation and the resulting political agreement provided for the establishment of the GNA. Despite initial interest from the parliament in Tobruk, the GNA's creation was subsequently overshadowed by ambivalence and non-recognition.

Alongside the country's political split, Haftar continued with his military campaign. Increasingly, the Tobruk-based parliament fell under his shadow. Tripoli became his target and in April 2019 he launched his latest offensive against it, backed by foreign support from the UAE and Egypt (and to a lesser and more indirect sense, Russia). By the end of the year, Haftar had reached the outskirts of Tripoli.

In November 2019, the GNA reached an agreement for financial and military assistance from Turkey. In January this year, the GNA was prepared to agree to a ceasefire but Haftar walked away.

By contrast, in early summer Turkish military assistance had been so underwhelming that alongside the forces aligned with the GNA, the Tripoli-based government had advanced and forced Haftar into retreat. Earlier this month, Aguila Saleh, the speaker of the parliament in Tobruk, was in Geneva exploring ceasefire options. But this time, the GNA showed little sign that it was ready to halt the fighting.

Viewed this way, the international community and media portray the conflict as one which is based largely on the GNA-Haftar rivalry. If they can get the two to agree to a ceasefire then many of the current difficulties may subsequently be overcome. But such an impression is far from reality, not least because neither the GNA nor the LNA are the unified entities portrayed in press reports.

The fact is that both the GNA and the LNA are an amalgamation of different armed groups and militias, many of them with strong local identities and connections as well as influence over the state and public funds in their part of the country. Adding Turkey to the mix only complicates matters further. As well as not having sufficient knowledge of the different forces on the ground, Turkey has its own biases and preferences for some over others. That will result in them privileging some armed groups at the expense of others, exacerbating tensions.

Because of the diverse nature of Libya's militias, their goals and patronage by other national and foreign powers, it will be extremely difficult either to accommodate or remove them into any post-conflict Libyan political system and economy, whatever the result of the current "national" dispute between the GNA and Haftar. 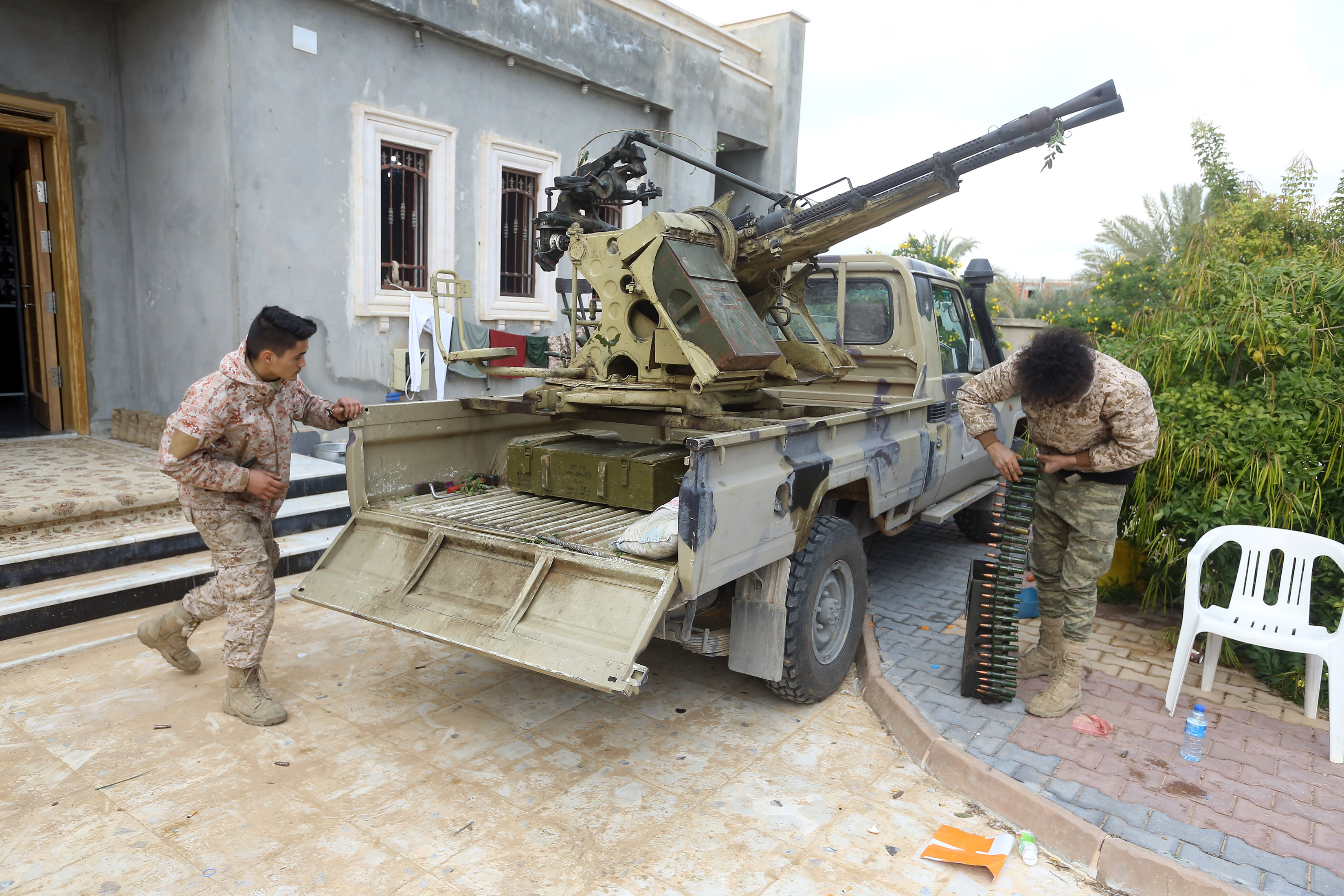 While the LNA claims to be a "national" army, the Italian Institute for International Political Studies believes that its regular forces number around 7,000, with a further 18,000 comprised of auxiliary forces, including from Chad, Sudan, tribal militias and other armed groups from the country's east.

As for the GNA's forces, those fighting for it are more united by their opposition to Haftar and the LNA than any loyalty or commitment to the government in Tripoli. Indeed, Haftar's offensive in 2019 arguably contributed to the false impression of solidarity among the different political and military factions based in the capital. Among them included some of the militias from cities like Zintan and Misrata, which after the LNA have the largest number of fighters.

Many of those militias as well as others that have aligned with the GNA or Haftar emerged following the defeat of the Gaddafi regime in 2011. Some split from earlier groups while others took advantage of the resulting weak state and its inability to provide security.

The absence of a strong central government meant that various factors – regional, religious, neighborhood and tribal ties – provided the basis for many of the militias to form. Added to these was also a less geographical consideration after 2017: the role and impact of militias on tackling crime.

Across the country, the militias' formations were aided by the abundance of arms left over from the uprising against Gaddafi and the lack of alternative employment options, thereby providing jobs and income for young men.

In addition, while Libyan society is not keen on the militias, they have been tolerated in Libyan society, but only so long as their actions have been directed outwards rather than inwards, thereby adversely affecting members of the local community.

Militia funding will make any resolution of conflict hard. Initially, the militias accessed public resources, owing to the absence of a state-based security alternative. But as Libya's economy has stagnated and the financial demands made by and within militias have grown, they have had to acquire resources from elsewhere. In its recent report on the subject, Chatham House noted that some militias are making use of unofficial and illicit sources of income, including taxes on movement and protection fees.

That the militias have become part of the fabric of the Libyan political system and society is something that any subsequent peace agreement will need to resolve.

Looking ahead, there are two paths that the international community could take.

One is that rather than pursuing a national dialogue and the establishment of an ideal national government, the focus should be on reducing the sources of tension at the local level. Such activity would echo the analysis and recommendations of critical peace scholars, like Roger Mac Ginty, who highlight the importance of implementing "everyday peace" at the neighborhood and community level.

The other is to redirect the balance away from the current focus on the GNA-Haftar rivalry and the foreign backers behind them. Jalel Harchaoui, a research fellow on Libya at the Clingendael Institute in the Netherlands, says "research needs to catch up."

"For the last 18 months, most literature and commentary has been on the international dimension. It really should be focusing on the hyper-local so that policymakers can navigate the next several months in a more informed manner," he says.