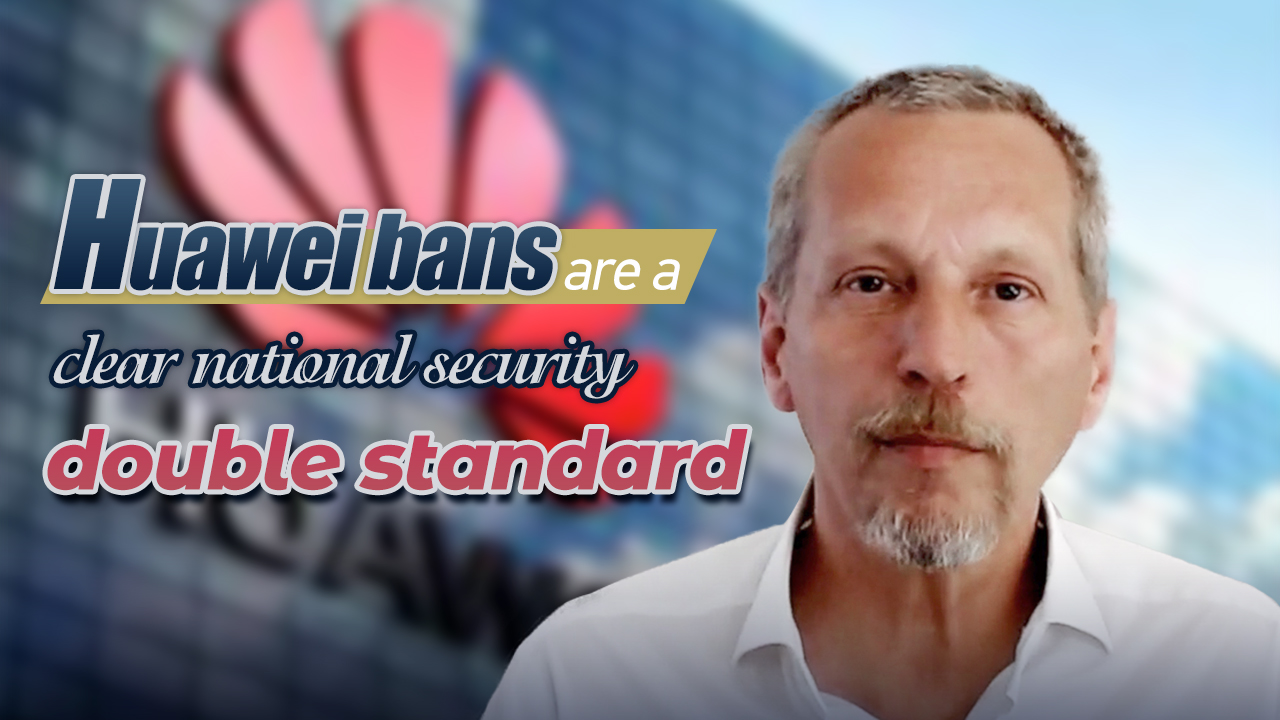 Editor's note: Dr. ir Johannes Drooghaag is an analyst and strategist for cybersecurity in the Netherlands and author of "The Human Element in Cyber Security". He wrote an open letter to Mr. Ren Zhengfei on July 21 to show his support. In this interview, he shares the reasons behind his letter and explains why Huawei becomes the target of many Western countries. The article reflects the author's opinions and not necessarily the views of CGTN.

CGTN: Should other countries worry about Huawei's technology in terms of national security?

At the moment, there is a proposal for legislation that could force companies to create a backdoor into encryption. That's how far the United States goes with their legislative powers.

Australia last year passed a similar law, basically forcing Australian-based companies to collaborate with the government and even provide them access to encrypted data.

When that is the reason behind our security concerns, and especially when I look at the European perspective, every country with such legislation should then be a risk. And not just the one country with which the United States happens to be in a trade war. I do not agree with those double standards.

CGTN: Why has Huawei become the target of many Western countries?

Drooghaag: That starts with the economic and the political issues and the statement by Mr. Trump himself that he was going to "obviate" the company. Huawei is in this enormous focus because it happens to be the crown of the technology development that China has seen.

The focus that they now have (on them) is the result of this trade war, which Mr. Trump initiated. He stated that this trade war was going to be easy to win. It turned out it was not that easy because he apparently didn't reflect on how important China is for many economies, for many supply chains and for many companies.

So, by targeting Huawei and putting the focus on Huawei for all their partners in the European Union and around the world, he's trying to downsize the economic strength of Huawei, and by that, harming China. And that's the reason countries around the world now suddenly look at Huawei as a threat. What happens at the moment has nothing to do with democracy. It has nothing to do with the free market.

CGTN: In an open letter to Huawei CEO Ren Zhengfei, you say the arrest of Meng Wanzhou, his daughter and the company's CFO, has crossed a red line and geopolitical developments should not drive people apart. Why do you say that?

Now we are back in that old (Cold War) stage. It's difficult to comprehend what is happening.

The company which was announced to be obviated as part of the economic war. And that is a personal act that is no longer about freezing a bank account or travel restrictions. That is a personal attack. It goes too far.

What we now see is that Canada is pulled into this economic and political conflict. Canada is known the world over for its friendly people and its beautiful landscapes. And it should not be that the neutral parties get involved. And it should not be that you hold the daughter of a person in custody just to get leverage in a conflict. And that's the message I wanted to bring to Mr. Zhengfei with my open letter. I don't know him. I just wanted to give him my mental support.