Pompeo may want a 'new Cold War,' not everyone does
First Voice 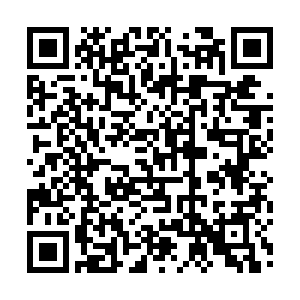 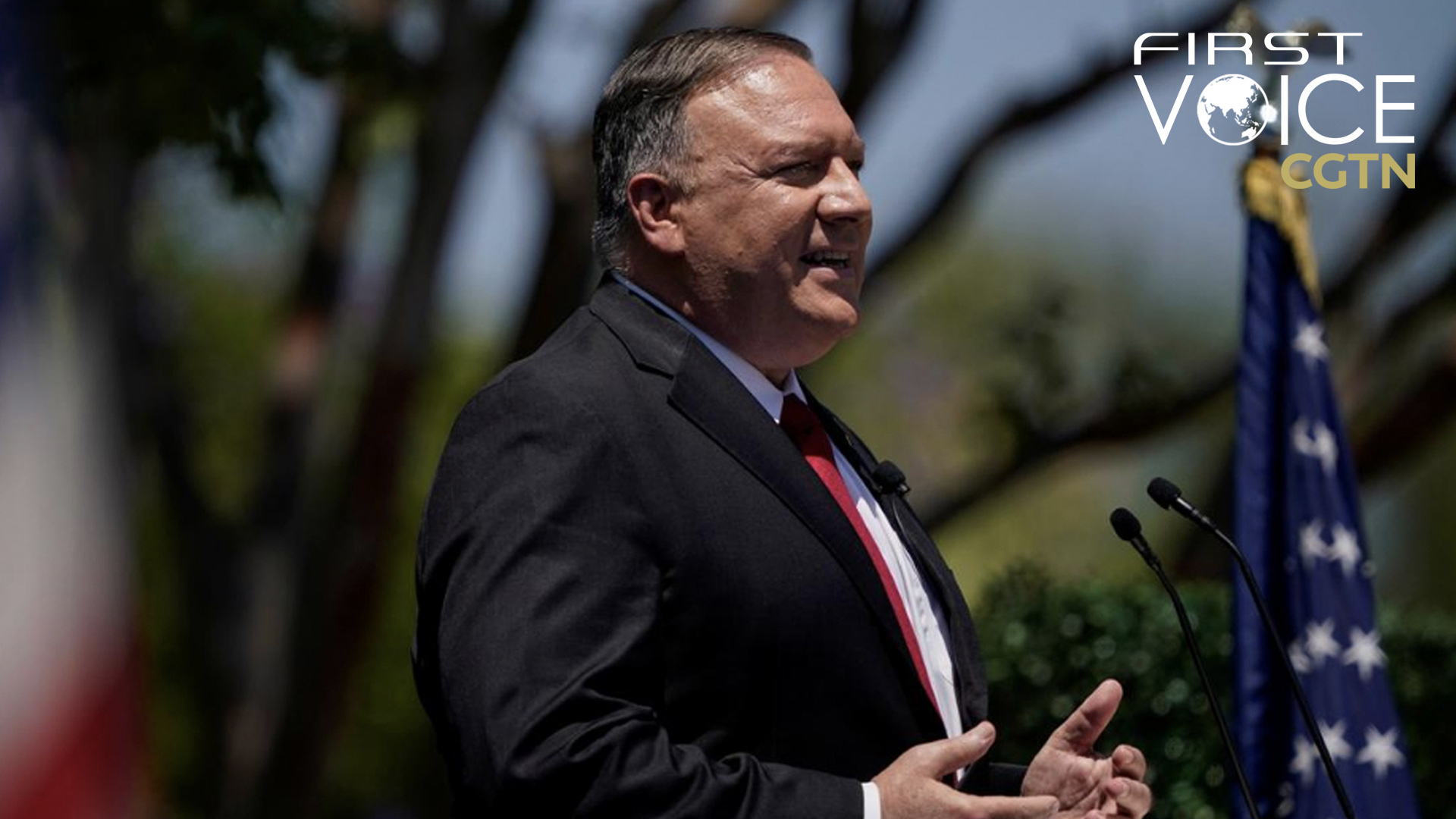 It is said that China and the U.S. have never been more divided since the establishment of diplomatic relationships in the 20th century. However, as its turning out, U.S. policy towards China is also reaching a depth of division like never before.

U.S. Secretary of State Mike Pompeo's infamous China speech on July 23 has incited a tsunami of criticism within America's foreign policy circles and in the media. Richard Haass, president of the Council on Foreign Relations, published an opinion piece in the Washington Post on July 26. He blasted Pompeo as "decidedly undiplomatic" and stated that Pompeo has misinterpreted history while failing to "suggest a coherent or viable path forward for managing a relationship that more than any other will define this era."

Steve Hadley, former National Security Advisor under President George W. Bush, believed that any administration's China policy should be a sustainable one that doesn't divide the world or take the two countries onto a path of confrontation. However, the problem is, many experts and former government officials don't see Trump administration's China strategy as solely centered on China or come from a place of international relations. 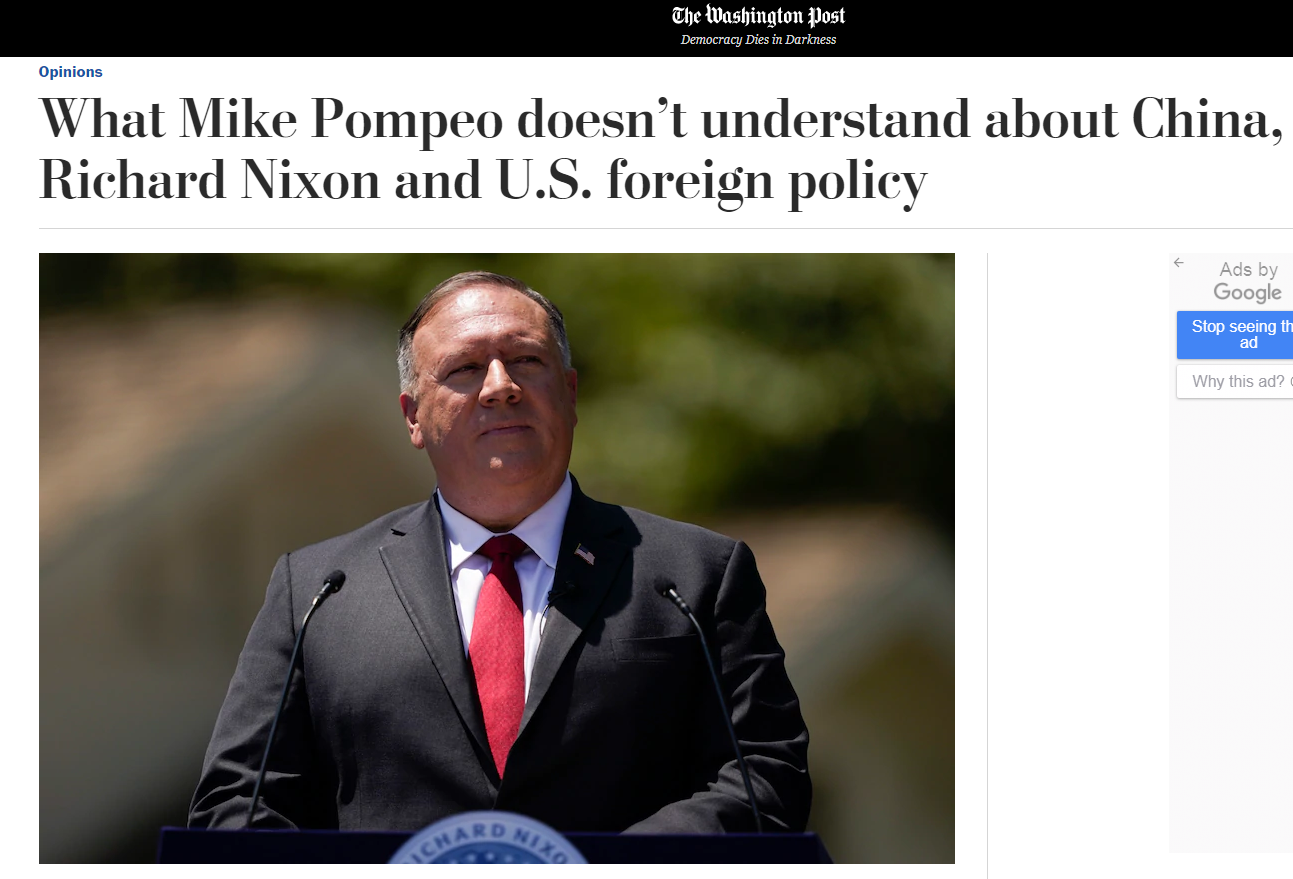 Rather, many see domestic situations in the U.S. and Trump's own political fortune as driving the administration's hostility towards the world's second largest economy. In a New York Times report dated July 25, it's made clear that Trump's campaign aides believe that aggression towards China, like closing down Chinese Consulate in Houston, "could help energize voters."

A story by Los Angeles Times published on July 26 pointed out that Trump's China policy has "repeatedly seesawed and has often appeared inconsistent or haphazard." But now, with the election on the horizon, China hawks are granted "free rein." Many China scholars and policymakers see this so-called "slegehammer" approach toward China as "counterproductive and disingenuous in its purported concern for Chinese people." Debroah Seligsohn, former U.S. diplomat focused on Asia, told LA Times: "There are ways to handle the relationship without blasting through it."

But blast it did. Michael D. Swaine, senior associate at the Carnegie Endowment for International Peace, wrote on Twitter that the U.S. move to close Chinese Consulate in Houston was a "transparent effort by mindless ideologues and political manipulators to help Trump's political fortunes." And in response to China's closure of U.S. Consulate in Chengdu, Swaine pointed out that the Trump administration wanted this move to happen. "It is part of the decoupling and demonization campaign that it thinks will magically make Beijing do what it wants," wrote Swaine.

The Financial Times had an interesting description of Pompeo's speech: "Short on prescriptive policy detail, Mr. Pompeo's speech had the feeling of a popular campaign speech at times." There has been no shortage of speculation about Pompeo's post-Secretary-of-State political ambition. In May, the NYT published a story pointing out that Pompeo had visited conservative donors and political figures on official business trips as he "nurtures plans for a presidential bid in 2024 and as he considered a run for the Senate form Kansas." As Trump's political fortune in uncertainty, it wouldn't be too unreasonable to imagine that Pompeo could be looking out for his own future. After all, who better to pick up the mantle of a president chanting tough on China than his very own Secretary of State who might've put China and the U.S. on a path of confrontation?