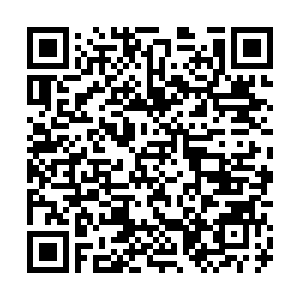 Hu viewed the remarks made by Pompeo as an "orange alert" on China-U.S. relations, saying in a tweet: "Despite a certain consolation he seemed to find in audience applause, Pompeo was just hugging himself with total negation of China-U.S. relations like a handful of diehard anti-China elements often do."

"What he has uttered cannot possibly alter the general course of progress for China-U.S. relations," the spokesperson noted.

Hu's remarks come after Pompeo's Thursday speech at the Richard Nixon Library, the former U.S. president who pressed the start button to normalize relations with China about five decades ago, during which Pompeo urged an end to the long-held engagement approach towards China and called for "a new alliance" to force China to change according to Washington's wishes.

The U.S. secretary of state mentioned Reagan's remarks on dealing with the Soviet Union on the basis of "trust but verify," saying that when it comes to the CPC, they must "distrust and verify." 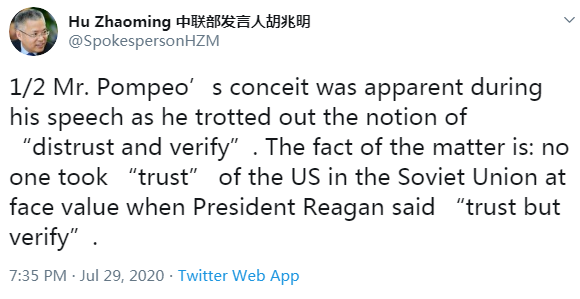 Hu refuted the remarks in his tweet and pointed out that Pompeo's conceit was apparent during his speech as he trotted out the notion of "distrust and verify."

The fact of the matter is: no one took "trust" of the U.S. in the Soviet Union at face value when President Reagan said "trust but verify," said Hu.

Back then, the Reagan administration at least tried to conceal what was in their mind, said Hu. Now Pompeo and his ilk have even fallen short of such usual standard, laying bare their cloven hoof from the very outset, he added.