Another sanction on China's Xinjiang: U.S. lashes out as it loses itself
CGTN Insight 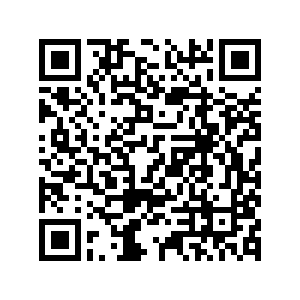 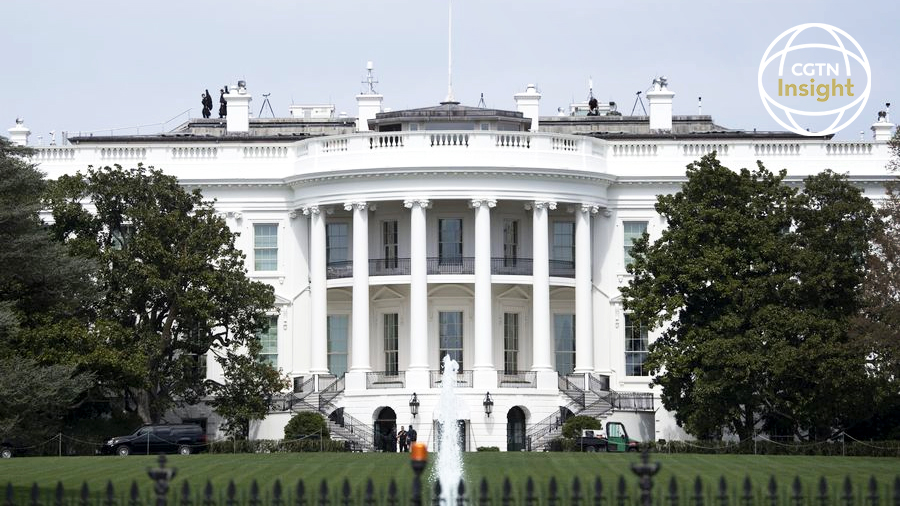 On July 31, just as China was about to celebrate its Army Day, U.S. Treasury Department blacklisted the Xinjiang Production and Construction Corps (XPCC) and two of its officials for alleged human rights abuses. Secretary of State Mike Pompeo accused the organization of getting involved in "a comprehensive surveillance, detention, and indoctrination program" against the Uygurs and other ethnic minorities in Xinjiang.

As usual, Pompeo's violation-of-human-rights-accusation and U.S. government's sanctions came without evidence. The Chinese government has repeatedly stressed that its policy in Xinjiang is focused on combating terrorism, extremism and separatism by boosting local economy. The policy has never been ethnically oriented, but based on the necessity of national security. And it has yielded fruitful results: for more than three years, there have been no terrorist activities in the region.

The XPCC has actually been a consequential part of the region's stability. On one hand, the paramilitary status of the organization provides the government with a means to react with speed and agility to terrorist attacks, ensuring the stability of the region and providing the fundamental condition for economic development. On the other hand, the XPCC itself is an engine for economic growth. Its gross product in 2019 reached more than 39 billion U.S. dollars and applied for more than 2,000 patents.

It is no longer news that the current U.S. government doesn't seek to create a relationship with China based on hard facts. Sanctioning the XPCC is the latest in a long line of escalating confrontational measures the U.S. have been taking in the past couple of years. 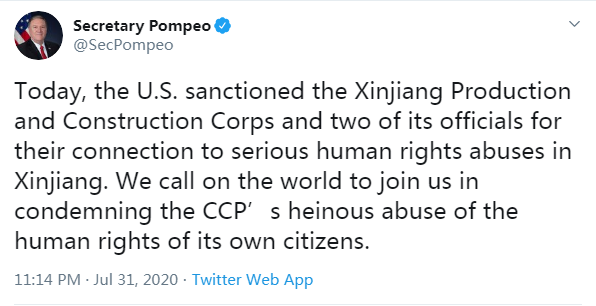 A screenshot of U.S. Secretary of State Mike Pompeo's tweet announcing the sanctions on the XPCC and two of its officials.

A screenshot of U.S. Secretary of State Mike Pompeo's tweet announcing the sanctions on the XPCC and two of its officials.

Not to undersell the significance of this sanction, but dwelling on it could mean losing the big picture. In recent days, the U.S. has made a series of moves against China, just as provocative as this one. U.S. President Donald Trump announced that he is banning TikTok from operating in the U.S. days after several Republicans claimed that the social media app could influence the outcome of U.S. election. Mike Pompeo described the Chinese government as peddling a "totalitarian" ideology. Even during tech chiefs' appearance in front of Congress this week, one of the most heated questions they faced was whether China is stealing technology from the United States.

The all-around suppression of Chinese development, the undermining of China's stability and the stirring up the political hype both at home and abroad have been seen by many as Trump administration's self-serving tactic to ensure its political future. And this new sanction very likely serves the same object.

Just a day before the new sanction was announced, the U.S. saw its second quarter economic report. Between April and June, the U.S. economy shrank by 9.5 percent. The media, liberal or conservative, describes such a contraction as either historical or worst in modern record-keeping.

To make things worse, such an economic downturn didn't buy U.S. the time or chance to contain COVID-19's spread. More accurately, the economic sacrifice was wasted by the government's dysfunction and refusal to deal with basic scientific facts - like wearing a mask, which wasn't recognized by the Trump administration as a legitimate way to combat the virus until late July.

And as many countries around the world have contained the spread or at least seen the case numbers drop, infections and fatalities in the U.S. have skyrocketed. According to Reuters, in July, the COVID-19 infections in the U.S. rose by 69 percent, 1.87 million, and the fatalities rose by 20 percent, or 25,770. Morgan Stanley's daily update shows that the virus was contained only in 12 states, and 27 states have been reporting new record-breaking numbers. 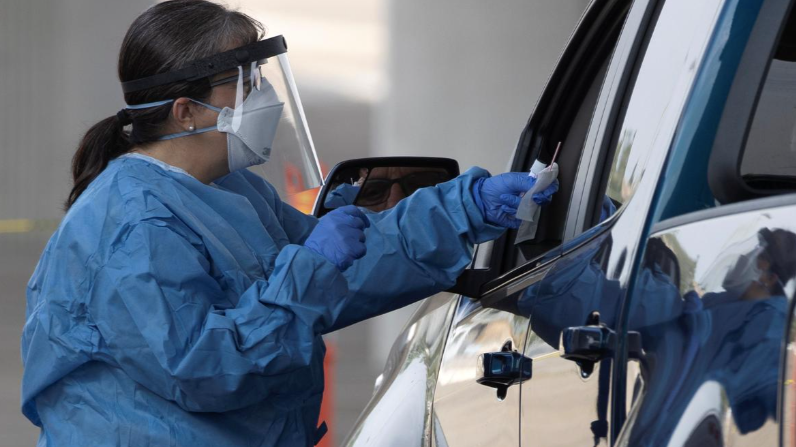 The disastrous economic performance coupled with the unchecked virus spread gave Trump an average disapproval rating of 55.8 percent. People's confidence in him handling the economy, once Trump's most important asset, has declined from 56 percent average in January and February to 49 percent. On average, people's approval of Trump's handling of the economy is on par with his chief rival Joe Biden's, while Biden now leads Trump in key battleground states like Pennsylvania and Florida by a substantial margin.

What's more effective for rescuing his flailing re-election campaign than shifting people's focus from his failure to something else? China seems to be the perfect target. Years of smear against the country has brought American public's dissatisfaction towards the country to an all-time high. Anyone that can become a standard-bearer China-basher would have the majority of the population behind him/her. In an electoral democracy, it's all that's needed to stay in the White House.

However, when foreign policy became a tool for the leader's personal political fortune, the country has lost its principle and moral on the international stage. The Trump administration's "America First" policy has already angered much of the international community. Its leader's insistence on a monetary reward for, well, everything turns American foreign policy into a money-making machine. The traditional "leader of the free world" image that the U.S. occupies has already been stripped off of her.

And no matter how many Chinese firms, state officials or government entities U.S. sanctions, it wouldn't rescue America from the ditch. The only results from lashing out is to hurt itself. And given how damaged the U.S. is already, making it worse wouldn't be a wise choice.