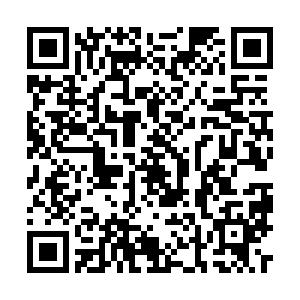 With the memories of Fight Island still fresh in our minds, the UFC returned home to the APEX facility in Las Vegas to host UFC Fight Night: Brunson vs. Shahbazyan. As UFC events go, this one was incredibly minor and, as with the other U.S.-based UFC events since the pandemic began, jinxed with a series of drop outs and unforeseen schedule changes due to COVID-19.

There was one meaningful fight, however: #8 Derek Brunson vs. #9 Edmen Shahbazyan. Shahbazyan is one of the hottest prospects in the middleweight division. Coming into this fight, he had a record of 11-0 which is incredible for a 22-year-old and, with the exception of a split decision over Darren Stewart at the TUF: Heavy Hitters Finale, they have all been decisive finishes: nine knockouts and one submission.

Not only does he have a strong track record, he has a good story too. He's an Armenian fighter at Glendale Fighting Club, best known as being where ex-UFC women's bantamweight champion Ronda Rousey used to train – in fact, Shahbazyan is one of her former sparring partners. 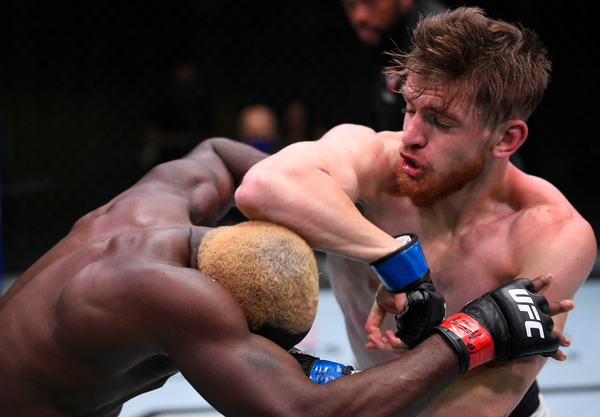 He's also training under Rousey's former head coach Edmond Tarverdyan. This is particularly important as almost all of Shahbazyan's wins have come via KO/TKO but it's Rousey's poor striking that's generally considered her downfall. After Rousey knocked out Bethe Correia, her unearned confidence led to her hard KO/TKO losses to former pro-boxer Holly Holm and the best boxer in women's MMA Amanda Nunes.

Shahbazyan's streak proved Tarverdyan had, if not learned from his mistakes, at least learned how to teach boxing correctly. Now he just needed to prove it against another powerhouse striker.

Derek Brunson, at 36 years old and with an MMA record of 20-7 going into today's fight, has become the poster boy for the concept of a division's gatekeeper. He basically has two fighting modes, either he KOs or submits his opponents in the first round (14 times) or grinds on them and wins by decision (six times). His first loss came to Tito Ortiz disciple Kendall Grove in 2012 and since then, they have all come to the middleweight elite: Ronaldo "Jacare" Souza, Yoel Romero, Robert Whittaker, Anderson Silva and current champion Israel Adesanya.

Brunson has only ever been beaten by champions or their toughest contenders, meaning this was by far Shahbazyan's toughest test and a victory would confirm his status as the real deal in the UFC's middleweight division - and that was what all the Las Vegas bookies expected.

Round 1 began reminiscent of a Muay Thai fight as both guys seemed to be feeling each other out, aware of each other's reputation as a knock-out artist. And then, with three minutes remaining, Brunson got a takedown and dominated each stage of the movement.

This unlocked Shahbazyan's beast mode and he began swinging on Brunson. From this moment on, the fight was slipping away from him. His big looping strikes hurt when they connect, but when they miss, they burn a lot of energy. Brunson slipped most of them and took him down again after a sloppy attempt at a flying knee.

In Round 2, Shahbazyan looked increasingly out of his depth. His punching remained vicious but Brunson kept close and dominated in the clinch. As commentator Dominick Cruz pointed out, he boxes then he shoots in for a takedown and repeats this until his opponent is on the mat. Shahbazyan had no answer for this and soon looked desperate, like he was relying on a lucky punch.

Round 2 ended with Shahbazyan being pulverized by Brunson's ground-and-pound and the bell was the only thing that saved him from a TKO loss. The damage, however, was done. Referee Herb Dean asked the doctor to check on Shabazyan to see if he was fit for Round 3; the doctor said he was OK to continue even though the fighter's body language made it look as if he knew it was already over. 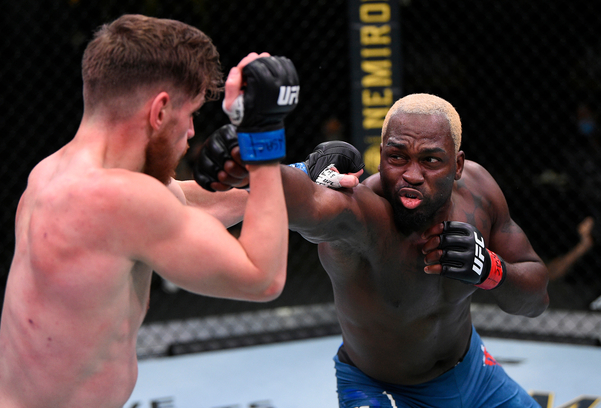 The final round opened with Brunson dragging Shahbazyan to the ground with ease. Herb Dean called it after only two punches and 26 seconds.

It's a victory that confirms Brunson's status as the consummate middleweight silver medalist. His game is complete, the only attribute he lacks is the one that has caused all his losses: speed. Souza, Whittaker, Silva and Adesanya all have lightning quick reactions and Romero only has two speeds, stop and go. It doesn't matter that Brunson is powerful on his feet and on the ground if he can't catch his rivals.

As for Shahbazyan, the loss is dire. Even though Tarverdyan has built himself the anti-Rousey in Shahbazyan, he did it working from the same template. She was one-dimensional and seemingly so is Shahbazyan. She could grapple but not strike, he can strike but not grapple, and worse, Shahbazyan appears to have inherited her paper tiger mindset. He's so used to running through fighters that he can't cope with adversity and crumbles. He's still incredibly young and has plenty of time to improve – perhaps only if he relocates to a different camp.