In data: China's fight against corruption in poverty alleviation
By Shi Yu 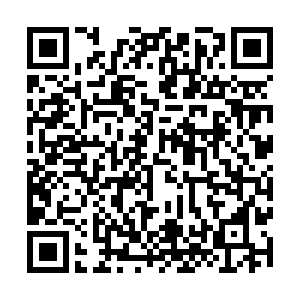 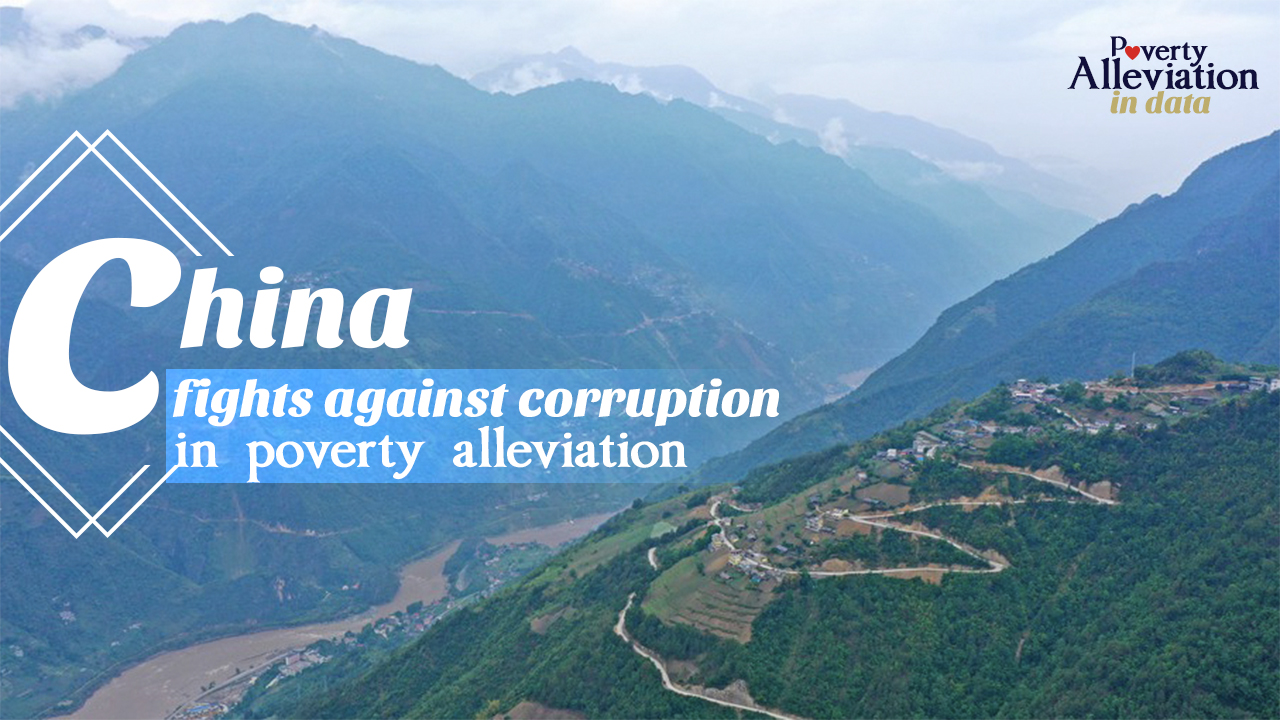 2020 is the final year for China to secure a decisive and complete victory in the fight against absolute poverty. It is also a meaningful year for Wang because he is going to pay off his three-year poverty alleviation microloans and say farewell to his old impoverished days.

Wang, a villager from southwest China's Sichuan Province, is not only a beneficiary of poverty alleviation policies, but he also benefits from China's anti-corruption campaign because he was once a victim of corruption, an official had stolen his loan qualification.

What changed Wang's destiny was the enhanced anti-corruption campaign in poverty alleviation launched by the 19th Central Committee of the Communist Party of China (CPC) in October 2018.

As one of the provinces with the toughest tasks in poverty alleviation, Sichuan was a major focus of the campaign. Several inspection teams tasked with rooting out corruption were dispatched to the area, and soon the village branch secretary's misconduct was discovered, reported and punished. Thanks to the inspection team, Wang finally received the loan he had qualified for two years ago.

Wang is not the only beneficiary of China's massive campaign against corruption. In a bid to facilitate carrying out targeted poverty alleviation, the CPC Central Commission for Discipline Inspection (CCDI), China's top disciplinary body, adopted a combination of measures to address corruption in poverty alleviation and the practice of formalities for formalities' sake and bureaucracy in the strictest manner.

The requirement was reiterated at the fourth plenary session of the 19th CPC Central Commission for CCDI, in which Chinese President Xi Jinping, who is also the general secretary of the CPC Central Committee, called for the creation of a state supervision system under which officials "don't dare to, are unable to and have no desire to commit acts of corruption."

"We must use 'iron discipline' to provide a strong guarantee to the building of a moderately prosperous society in all respects," Wang Yanfei said. 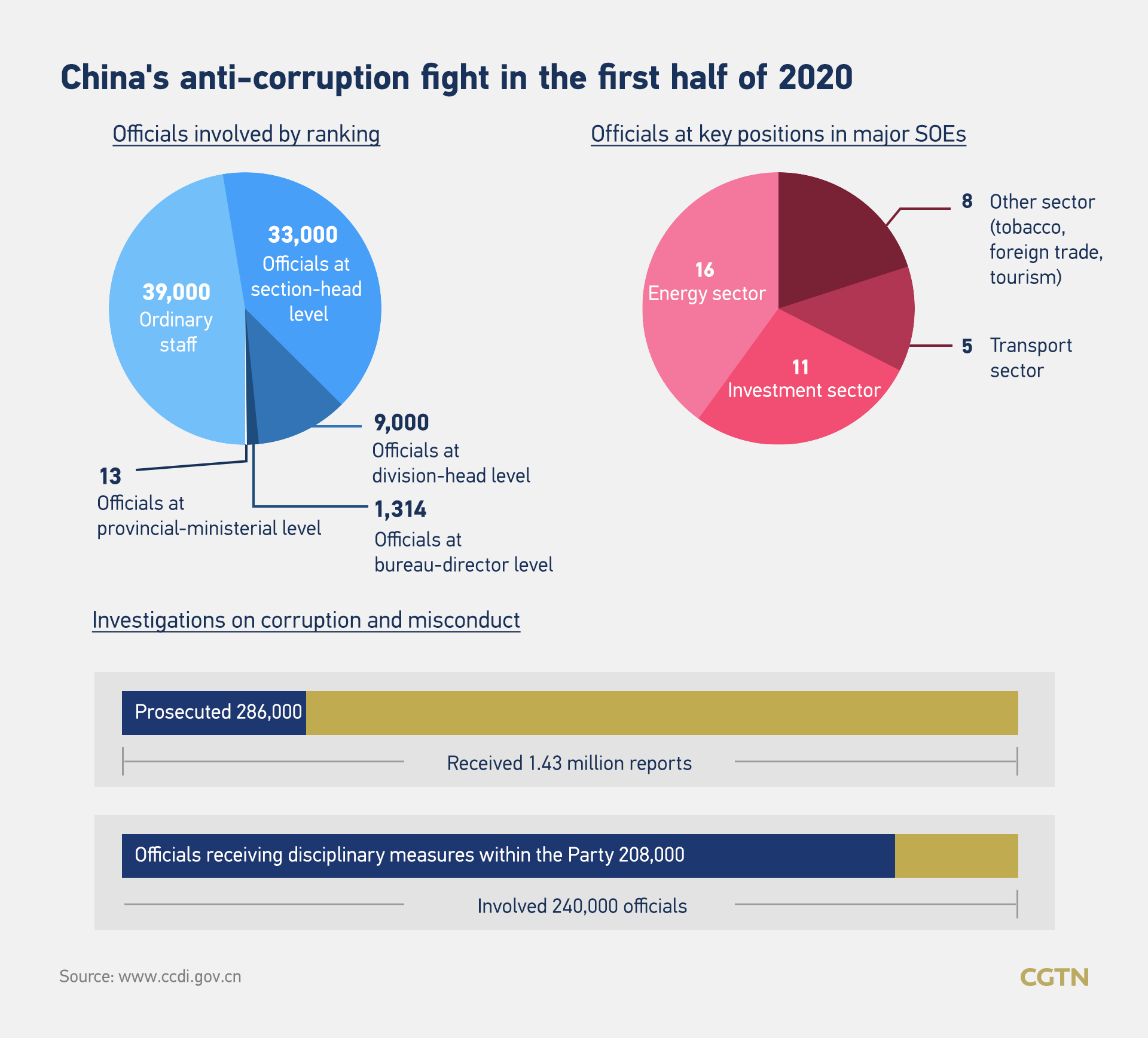 Under the iron discipline, in 2019, disciplinary inspection and supervisory organs across the country filed and investigated 555,000 cases, with 485,000 people receiving disciplinary measures within the Party or government agencies, and 19,000 were transferred to procuratorates for criminal investigation, statistics published by CCDI showed.

Around 70,800 corruption and 86,400 misconduct cases involving and related to poverty relief and people's well-being were handled during the period, with 99,000 and 110,000 people punished, respectively.

China's crackdown on anti-corruption has been ongoing since November 2012. The efforts were stepped up after China announced that it would eradicate absolute poverty and build a moderately prosperous society in all respects by 2020.

From a legal perspective, China has enacted several laws and regulations to provide a legal foundation for anti-corruption campaigns. As the deadline approaches, related legal actions have also been accelerated.

The establishment of CCDI, together with the National Supervisory Commission, was one of the results of the reform on China's supervisory system. Founded in June 2018, the institutions aim to build a comprehensive supervisory network. 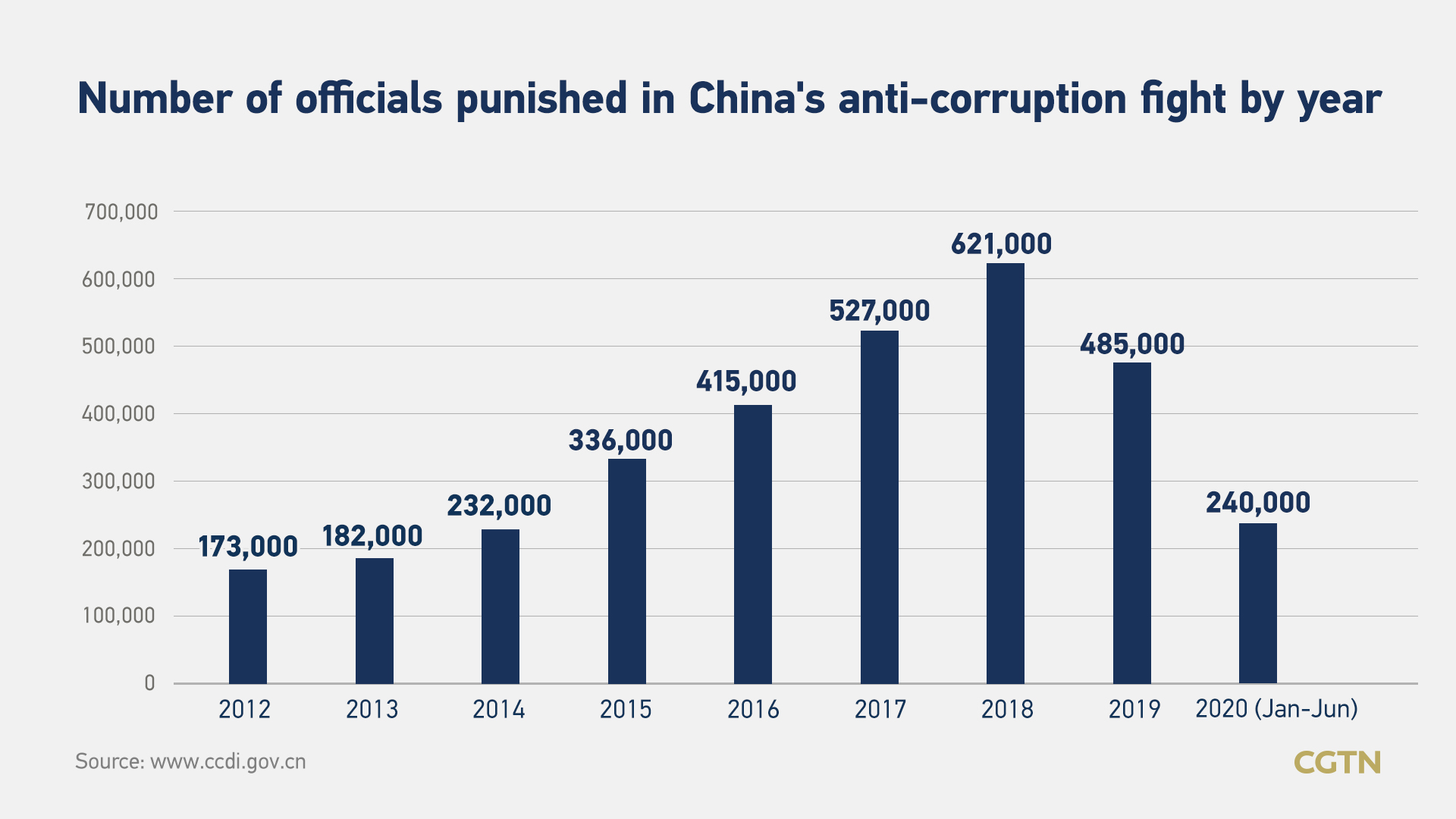 Under the Supervision Law adopted by the national legislature in March 2018, supervisory commissions of all levels are entitled to place civil servants, the staff of judicial agencies, executives of state-owned enterprises, senior staff of public institutions and mass organizations under one supervisory network.

In terms of primary legislation, the Criminal Law of the People's Republic of China contains provisions on the criminal offenses of bribery and corruption that apply to both official bribery and commercial bribery since 1980. It was later enhanced in the following amendments in 1997.

The Procurator-General of the Supreme People's Procuratorate (SPP) issued Interpretation of Several Issues Concerning the Application of Law in Handling of Criminal Offences Cases Related to Graft and Bribery in 2016, which provides judiciary interpretation on bribery, corruption and misappropriation of official funds.