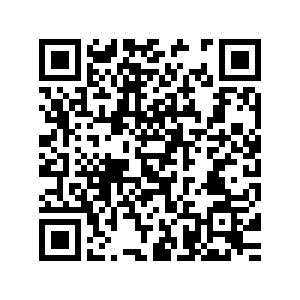 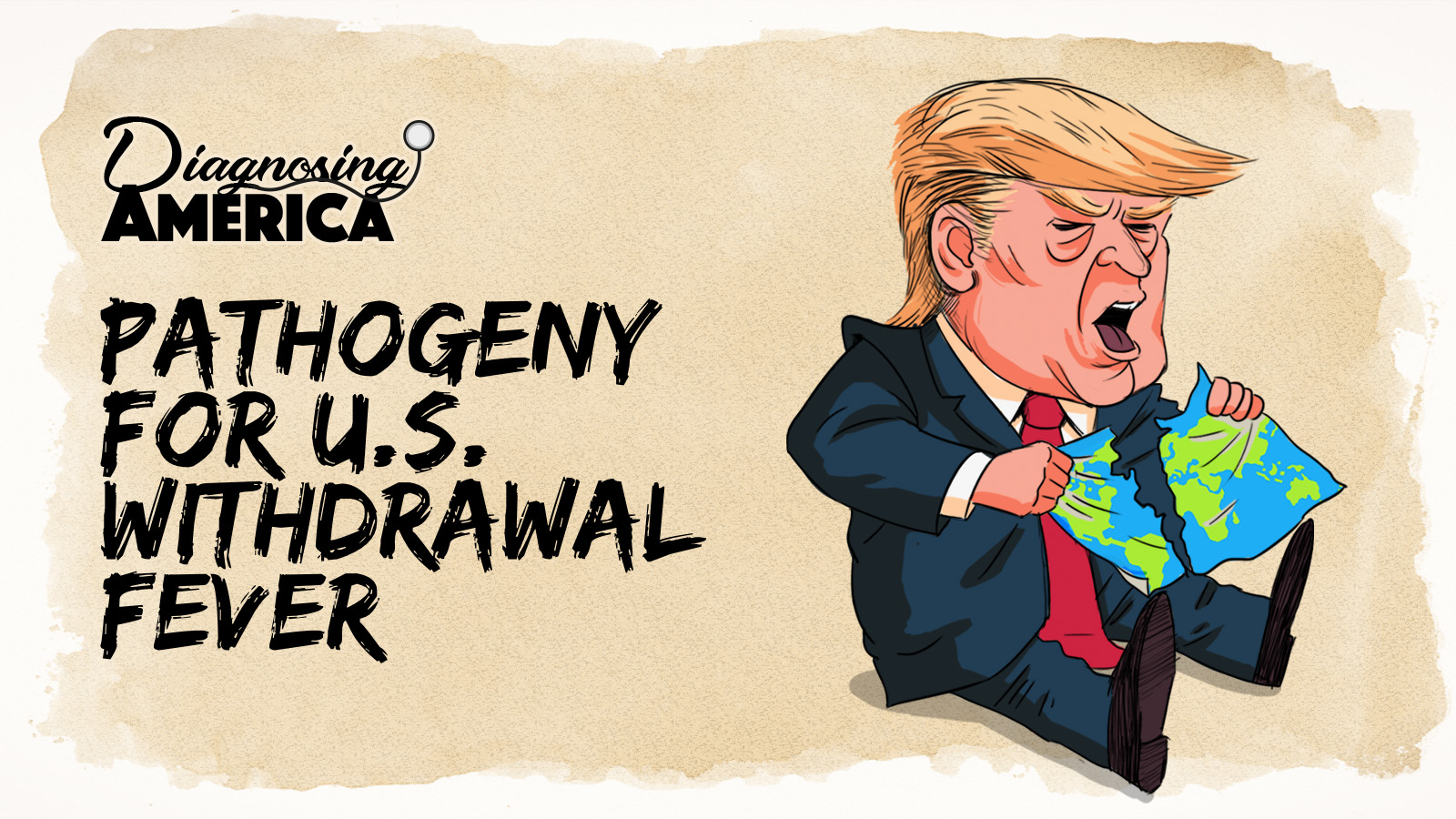 Editor's note: Waging tariff fights, quitting international bodies, sowing dissent between the EU and Russia, confronting China on all fronts, the United States is rewriting its global role under Donald Trump. Is the country becoming a source of unrest in the world? CGTN Insight introduces Diagnosing America, a mini-series investigating what lies behind the United States' repeated challenges to the international order. The first episode is on U.S. withdrawal fever.

No one would deny American presidents' efforts in establishing international organizations and their dominant status in these global bodies. But this is becoming history. Since taking the oath of office, Donald Trump has astounded the world for his enthusiasm for withdrawing the country from a slew of international pacts – the Paris climate agreement, the Trans-Pacific Partnership, UNESCO, the Iran nuclear deal, the World Health Organization, to name but a few.

Trump glorified the exits as his pursuit of Making America Great Again. This is merely an excuse. The withdrawals are an act of political expediency in addressing the country's economic problems.

Despite its status as the world's largest economy, the U.S.' severe economic headache is not news. A fundamental cure requires the redistribution of social wealth. This would, for sure, sacrifice the interests of consortiums, but apparently, Trump has no intention to betray his sponsors. Blaming all economic problems on globalization and pulling the country from international bodies is the easiest way out.

Why so? First, have a look at the severity of income disparity in the United States. In 2018, the richest 10 percent of households held 70 percent of total household wealth, up from 60 percent in 1989, according to Fed economists. "The increase in the wealth share of the top 10 percent came at the expense of households in the 50th to 90th percentiles of the wealth distribution," the Fed said. While the upper-class is seeing its wealth exploding, the lower- and middle-class saw "essentially zero net gains in wealth" over the past three decades, "driving their already meager share of total wealth down to just 1 percent from 4 percent. 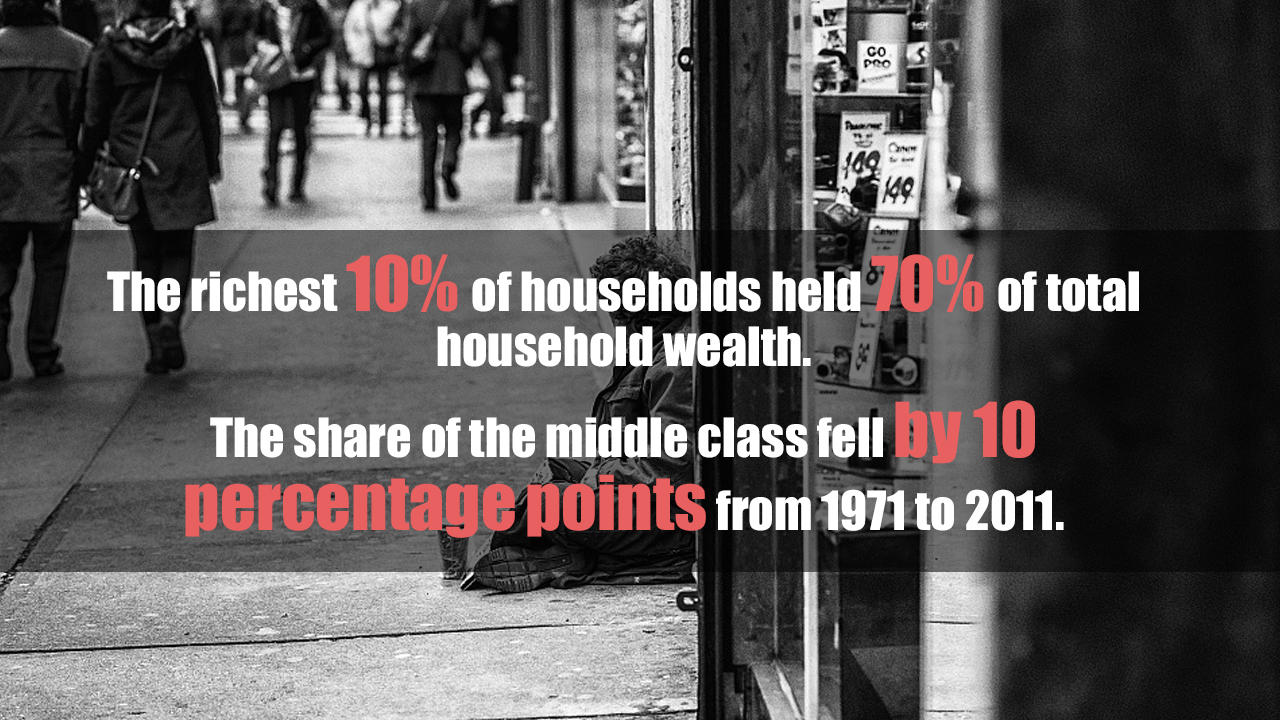 This is an inevitable result of capitalism where profiteering makes a minority people hold a majority of the total wealth. Former U.S. President Franklin D. Roosevelt was fully aware of the consequences of profit-oriented capitalism and thus introduced the New Deal that focused on 3 Rs – relief for the poor, recovery of the economy and reform of the financial system. The first R, to some extent, alleviated the wealth disparity.

But the New Deal did not last long. The Reagan Era saw an upsurge of neoliberalism where capitalism was replaying a dominant role in American society. Without suspense, laissez-faire economic liberalism has further encouraged the income gap. Sadly, no effective solution was introduced to address the issue in the following generations. And the humongous wealth gap keeps widening in the 21st century.

According to the Pew Research Center, the share of the middle class fell by 10 percentage points from 1971 to 2011. The differences in the financial gains have further expanded the income disparity. While middle-class households experienced an income gain of 6 percent from 2010 to 2016, the figure is 9 percent for upper-income households and 5 percent for lower-income families. Like his predecessors, Trump has never attempted to carry out any fundamental reform to tackle this decades-long problem.

Globalization has further deteriorated America's domestic economic headache. The Cold War era means no economic interactions between capitalist and socialist camps. With no competition from the emerging economies and mighty labor unions on their back, the middle class thrived in the United States. But this is coming to a full stop with globalization.

In the era of global integration, American businesses can easily find low-cost manufactured components and labor in developing countries. Figures explain. The cost of hiring a factory worker for one day in Argentina is 26 percent that of the United States. The corresponding numbers are 23 percent in Brazil, 13 percent in Mexico, and 4 percent in the Philippines, according to a study by Cornell University's ILR School in 2010.

A comparison between China and the U.S. is more explanatory. As shown by the Bureau of Labor Statistics, an average manufacturing laborer in the U.S. can work 8.6 hours a day with an hourly wage of 23.32 U.S. dollars. But the cost of hiring a same-level worker in China is only 1.36 U.S. dollars an hour – less than a tenth of their American counterparts. Chinese laborers' workday is much longer as well: 12 hours. 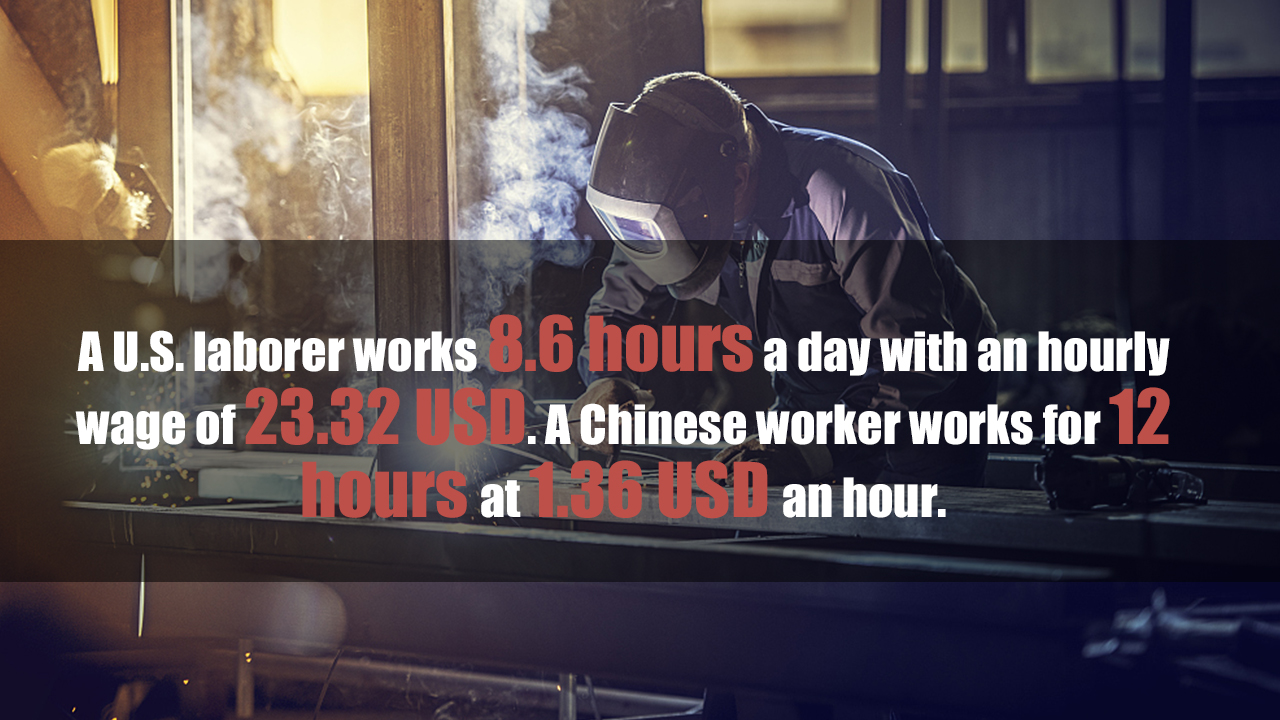 Moving factories to developing countries is a must for profit-oriented American businesses. After all, making profits, not social equality, is what capitalism is all about. With lower manufacturing costs and easier access to new markets, American plutocrats reaped colossal benefits from globalization. But this is at the sacrifice of blue-collar workers, as the shrinking factory sector can be interpreted as a synonym to their job losses.

Trump's rise and his solution

But these lower-class Americans have votes. And this has eventually put unilateral Donald Trump in the Oval Office. In the face of the humongous wealth gap that has perplexed the country for decades, Trump's solution is playing the blame game – imputing the U.S.' shrinking manufacturing sector, soaring unemployment rate and widening income disparity entirely onto emerging economies. It is in this context that the president has waged global tariff fights and frantically pulled his country out from international organizations and pacts.

American politicians are clear that profit-driven capitalism, not globalization, is the root cause of the decades-long economic problem. And fundamental societal, political and economic reforms similar to Roosevelt's New Deal are the only solution. But they are also clear that any attempt to redistribute the social wealth will inevitably sacrifice the interests of American financial cliques.

As a businessman-turned-president, Trump, apparently, is not willing to offend his sponsors. It's no secret that capital is playing a vital role in America's bipartisan politics. Without financial support from plutocrats, Trump may never have managed to make his appearance on America's political arena. For Trump, offending consortiums means putting his entire political career at risk.

The president's attitude on tax is enough to demonstrate his desperation for the plutocracy's support. Everyone knows tax is indispensable in readjusting wealth distribution. But interestingly, it turns out to be an effective tool to court sponsors in Trump's case. Following his 2017 tax cut, America's richest 400 households saw their overall tax rate standing at 23 percent in 2018 – less than a quarter of their total income. That's compared with 70 percent in 1950 and 47 percent in 1980, according to The New York Times (NYT). 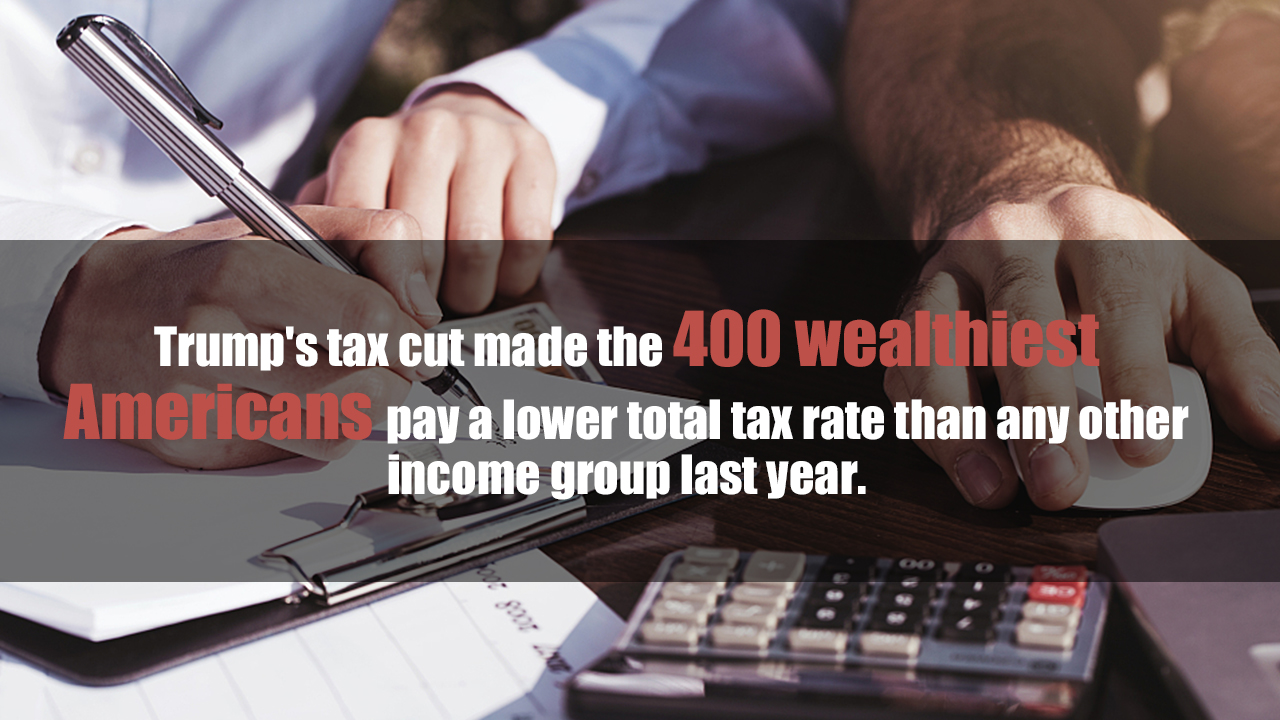 "For the first time on record, the 400 wealthiest Americans last year paid a lower total tax rate — spanning federal, state and local taxes — than any other income group," The NYT said. Not surprisingly, the rich become richer, and the poor poorer. A cursory look at the funds Trump received from billionaires in his 2016 campaign decides the widening wealth gap is an inevitable result. The more eager Trump is for the plutocracy's support and the political win, the less likely he is to sacrifice his sponsors' interests.

But in the meantime, Trump cannot ignore his grassroots supporters' concerns. Attributing America's economic problems entirely to globalization is the easiest way out. In this way, Trump does not have to worry about moving the plutocrats' cheese, and saying no to international responsibilities is a convenient way to woo his blue-collar voters bearing grudges against globalization.

To address the country's time-honored economic headaches, fundamental reform is a must. In this process, the consortia's cheese will have to be moved to narrow down the income gap. Unwilling to offend plutocrats but pressured to comfort his base of voters, Trump resorted to the blame game – attributing all the economic problems to globalization. This is irresponsible and is not a cure.

Any government, be it socialist or capitalist, has the responsibility to redistribute the social wealth. The severity of America's economic problem proves that shelving the problem only makes it worse. Playing the blame game and denying international responsibilities is only a waste of time. The Trump administration knows it. But his political career apparently carries much more weight than making America great again.