In The Spotlight: Who are the 11 Americans newly sanctioned by China?
CGTN 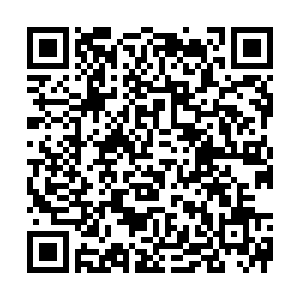 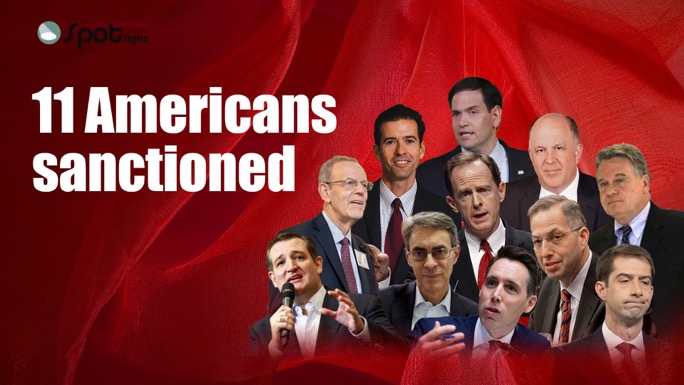 Earlier this week, China imposed sanctions on 11 American citizens including senior officials and heads of several non-governmental organizations (NGOs) because of their egregious records on Hong Kong affairs.

The move was partially a response to an earlier round of U.S. sanctions targeting Chinese officials whom Washington had accused of curtailing political freedoms in Hong Kong, which returned to China in 1997 after over a century under British colonial rule.

Waves of protests broke out last year in Hong Kong over a bill that allowed criminal suspects in the city to be extradited to the Chinese mainland. After the demonstration began in March, it soon turned into riots as shops were smashed and subway stations were set on fire by the "black terror" – as protesters were known by locals for wearing black T-shirts and pants.

The city broke down in complete lawlessness in November as the protesters ganged up on residents who voiced disapproval of their behavior, even lit a man on fire for disagreeing in the Ma On Shan neighborhood. The black-clad protesters also attacked lone police officers and seized the campus of the Hong Kong Polytechnic University.

Chinese Foreign Ministry spokesperson Hua Chunying noted that much evidence point to NGOs for inciting violence and separatism among protesters.

On June 30, China passed a national security law for Hong Kong intended to punish those who commit acts of terrorism and secession. The previous legal void had enabled infiltration of the movement by foreign regime-change operations such as the National Endowment for Democracy (NED). Several protest leaders, including Joshua Wong, were also caught meeting with American State Department officials during the protests.

So, who are exactly the 11 Americans that China sanctioned? What did they do? Where do they stand in Washington's Beijing approach?

The latest wave on this "conservative superstar" is the publication of his opinion piece on The New York Times that led to the resignation of the paper's editorial page editor James Bennet. In the piece, Cotton describes the nationwide Black Lives Matters movement as an "orgy of violence" and voices support for President Donald Trump's threat to use troops to quell the chaos. "As the Founding Fathers said, it was the necessary evil upon which the union was built, but the union was built in a way, as [Abraham] Lincoln said, to put slavery on the course to its ultimate extinction," he said.

Before his racist comments, he was known as a solid China hawk. From Xinjiang to Hong Kong to the COVID-19 pandemic, he's been playing a chaotic role in formulating Washington's anti-Beijing policy. Trump's travel ban on Chinese citizens in January largely drew on his idea to halt commercial flights from China. During an interview with Fox News the next month, he claimed the coronavirus "may have started from the biosafety level 4 super laboratory in Wuhan," though he has no evidence.

He's also behind the U.S. ban on the imports of Xinjiang's textile products, alleging they are made with "the systematic use of forced labor by Uygur Muslims."

Besides, the former U.S. army captain is a stern supporter of confrontation against Iran.

While some media outlets compare him to Trump in that they have similar policy initiatives, others think he's more dangerous than Trump.

Cruz came into the global spotlight in 2016 when his tit-for-tat rivalry with Trump in the presidential campaign later turned into a close bond. Four years after, he remains loyal to the president. He's one of the many Republican senators to endorse an early reopening of the economy.

Shelley Luther, a hair salon owner in the city of Dallas, Texas, had been sentenced to seven days in jail for illegally reopening her store but was released after Trump supporters and high-profile Republicans accused the move of government overreach. Cruz was one of them. He even arrived at the salon for his first haircut in three months.

The Harvard law graduate is also on the same page with Trump in China policies regarding Xinjiang, Hong Kong and the latest TikTok. "I'm proud to support the bill," he said, referring to the "Uygur Human Rights Policy Act." Last October, he became the highest-profile U.S. politician to visit Hong Kong since protests broke out. Regarding Trump's target on TikTok, he said "Chinese espionage is an enormous problem."

But his imminent fear might be the blue-state invasion into his home state – a Republican stronghold, as the election approaches.

Hawley is behind several Trump administration's China initiatives including on the issues of Hong Kong SAR and TikTok.

In March, he announced legislation to ban social media app TikTok from all federal employees and all government devices.

Despite styling himself as an anti-elitist and repeatedly flashing his "small-town" credentials during campaign rallies, Hawley was born to a family of privilege; his father worked as a banker and mother a teacher.

As a student, Hawley enrolled in a private boy's prep school in Kansas and went on to attend elite American universities including Stanford and Yale, where he received a Juris Doctor degree and led the school's chapter of the conservative Federalist Society.

With the help of President Trump and Senate Majority Leader Mitch McConnell, Hawley unseated Democratic rival Claire McCaskill in 2018 and became the youngest member of the U.S. Senate at age 40.

In the words of The Intercept's Mehdi Hasan, Hawley is a "smarter, slicker, savvier version of Trump" that could one day be the new face of "Trumpism."

Born to Cuban parents who fled to Florida working as blue workers, Rubio always portrays himself as a self-styled operative who's made it from grassroots exile to a Washington insider. It's this heritage that helped thrust him into political stardom, in particular as Cubans constitute the third largest Hispanic American community and one that is poised to become the biggest ethnic voting bloc in the 2020 election.

Rubio's rapid ascent was also aided by his 15-year bond with Jeb Bush – former President George W. Bush's younger brother – who was the governor of Florida between 1999 and 2007. In 2010, he said he would never challenge his political mentor if Jeb wanted the job himself, displaying full-fledged loyalty. But things turned around in 2016 when he announced his run for president in 2016, turning their intimacy into a head-on rivalry. He dropped out only after trailing behind Trump and Cruz.

Steeped in his roots, Rubio supported an overhaul of immigration reform but gradually drifted to a piecemeal approach due to objections from his fellow Republicans. Beyond that, he runs in the same groove with his party members in opposing government-mandated health care, gun control and same-sex marriage, as well as in containing a rising China.

He's the architect of two Senate bills against Hong Kong and Xinjiang, using wanton accusations of China's human rights abuses. Besides his "ethics" on human rights, he's increasingly involved in a tech war against the world's second largest economy by filing legislation to prevent Huawei from seeking damages in U.S. patent courts.

In July, Toomey led the effort to pass Senate legislation aimed at sanctioning Chinese officials for passing the national security law for the Hong Kong SAR.

Toomey was born to Catholic parents in Rhode Island. He attained the rank of Eagle Scout before graduating as valedictorian of his high school class.

For years, Smith has pushed for several initiatives to punish China for what he considered to be human rights violations.

In 2014, he co-sponsored the Hong Kong Human Rights and Democracy Act during the "umbrella movement."

In 2018, Smith attacked China on human rights grounds by citing the unverified claim that the country had detained one million ethnic Uygurs and other minorities in the northwestern Xinjiang Uygur Autonomous Region.

Roth has repeatedly criticized the Chinese government for what he alleges as a violation of human rights in Hong Kong and Xinjiang. During the riots that swept Hong Kong last year, Roth openly supported violent protesters.

In December last year, China imposed sanctions against Human Rights Watch and four other American NGOs that it deemed had meddled during Hong Kong's riots.

After graduating from Yale Law School, Roth worked as a federal prosecutor for the U.S. Attorney's Office for the Southern District of New York and the Iran-Contra investigation. When his stint in politics ended in failure, he turned to focus on the Soviet Union's "repression" in its satellite state Poland and began a career in human rights.

Roth joined Human Rights Watch in 1987 and became its chief executive director in 1993.

As violence escalated in Hong Kong toward the end of last year, Abramowitz openly supported the rioters, issuing similar lines as the U.S. State Department in attacking the Chinese government.

Prior to his work at Freedom House, Abramowitz was the director of the U.S. Holocaust Memorial Museum's Levine Institute for Holocaust Education.

Since its founding, the International Republican Institute (IRI) has worked as a reliable vehicle in pushing the agenda of U.S. foreign policy establishment.

As one of the major branches under the NED, the IRI works under the banner of advancing "democracy and freedom."

Before joining IRI, Twining worked as a counselor at the German Marshall Fund.

As the first and only leader of NED, Gershman oversaw covert funding from the organization to Hong Kong, grooming dissidents to voice disapproval of the Chinese government.

In an interview with Voice of America, then vice-president of NED's programs for Asia, the Middle East and North Africa Louisa Greve revealed that the organization had granted several million dollars to various groups in Hong Kong over two decades.

The NED also has well-known links with U.S. intelligence agencies. In 1991, The Washington Post quoted NED founder Allen Weinstein who said that "a lot of what we do today was done covertly 25 years ago by the CIA."

Prior to joining and leading NED, Gershman served as the U.S. ambassador to the UN Human Rights Council under the Reagan administration. During his period, Gershman was mentored by his boss and cold warrior extraordinaire Jeane Kirkpatrick, who had once argued in an essay on the superiority of right-wing military juntas to leftist governments.

As a major branch under NED, the NDI was used as one of the main vehicles to supply the much-needed financial bloodline to various groups in Hong Kong last year. In fact, money from the NDI was a major factor in keeping the riots alive.

At the height of the crisis, Michell was caught meeting with one of the main architects of the movement, Hong Kong politician Anson Chan.

Before joining the NDI, Mitchell worked devotedly in Democratic politics and rose to become the American Ambassador to Burma in 2012 during the Obama administration – the first person to take up the position in 22 years.