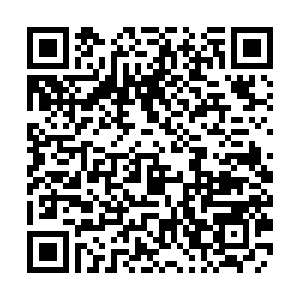 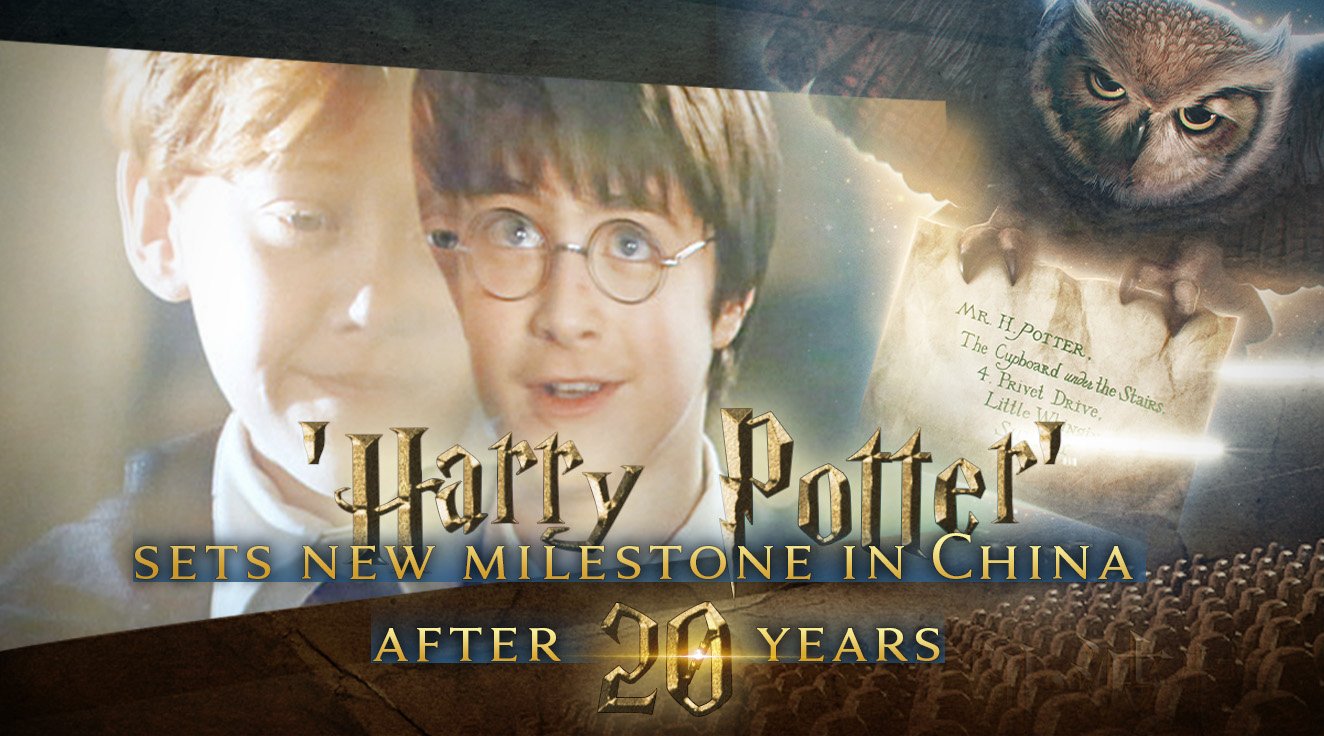 Harry Potter and his friends are once again working their magic in the muggle world.

"Harry Potter and the Sorcerer's Stone," the first installment from the Warner Bros' multi-billion dollar franchise, has returned in a 4K 3D digital restoration for the first time 19 years after its original release, hitting theaters nationwide in China over the past weekend.

Remastered in 3D and in IMAX versions, the coming-of-age film has been hailed as the most-awaited among reissues aimed at enticing viewers back to recently reopened Chinese cinemas.

With the reissue, the entertainment giant was betting on China's infatuation with the wizard world to lure more moviegoers back into theaters at a time when cinemas are still recovering slowly from the COVID-19 impact. Despite reduced footfall since theaters reopened, their bet seems to have paid off. 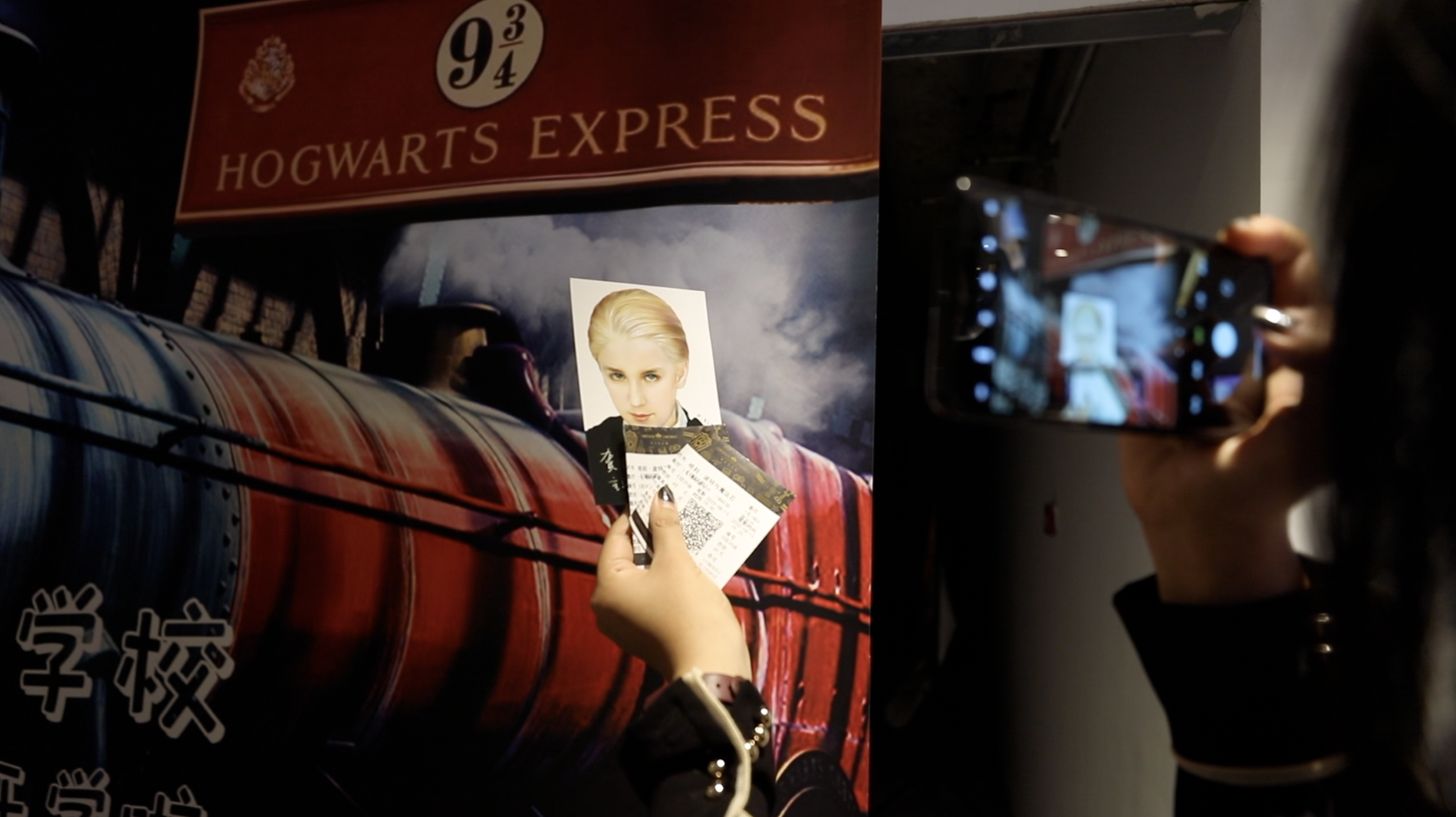 A fan takes pictures before watching the re-screened film at the Emperor Cinema in Beijing, China, August 15, 2020. /CGTN

A fan takes pictures before watching the re-screened film at the Emperor Cinema in Beijing, China, August 15, 2020. /CGTN

The family film raked in 94.7 million yuan (over 13.6 million U.S. dollars) during its reopening weekend, securing the best single weekend performance since screenings resumed the service.

On August 15, the second day of its re-release, it nabbed the biggest single-day gross of 33.2 million yuan (4.8 million U.S. dollars), according to Maoyan, China's film ticketing platform.

The relaunch in China has also pushed the film's box office over the one-billion-U.S.-dollar mark, becoming only the second title in the "Harry Potter" franchise to reach this milestone worldwide.

With Chris Columbus at the helm, "Harry Potter and the Sorcerer's Stone" first hit the cinemas in 2001, starring Daniel Radcliffe in the titular role, with Rupert Grint as Ron Weasley, and Emma Watson as Hermione Granger. 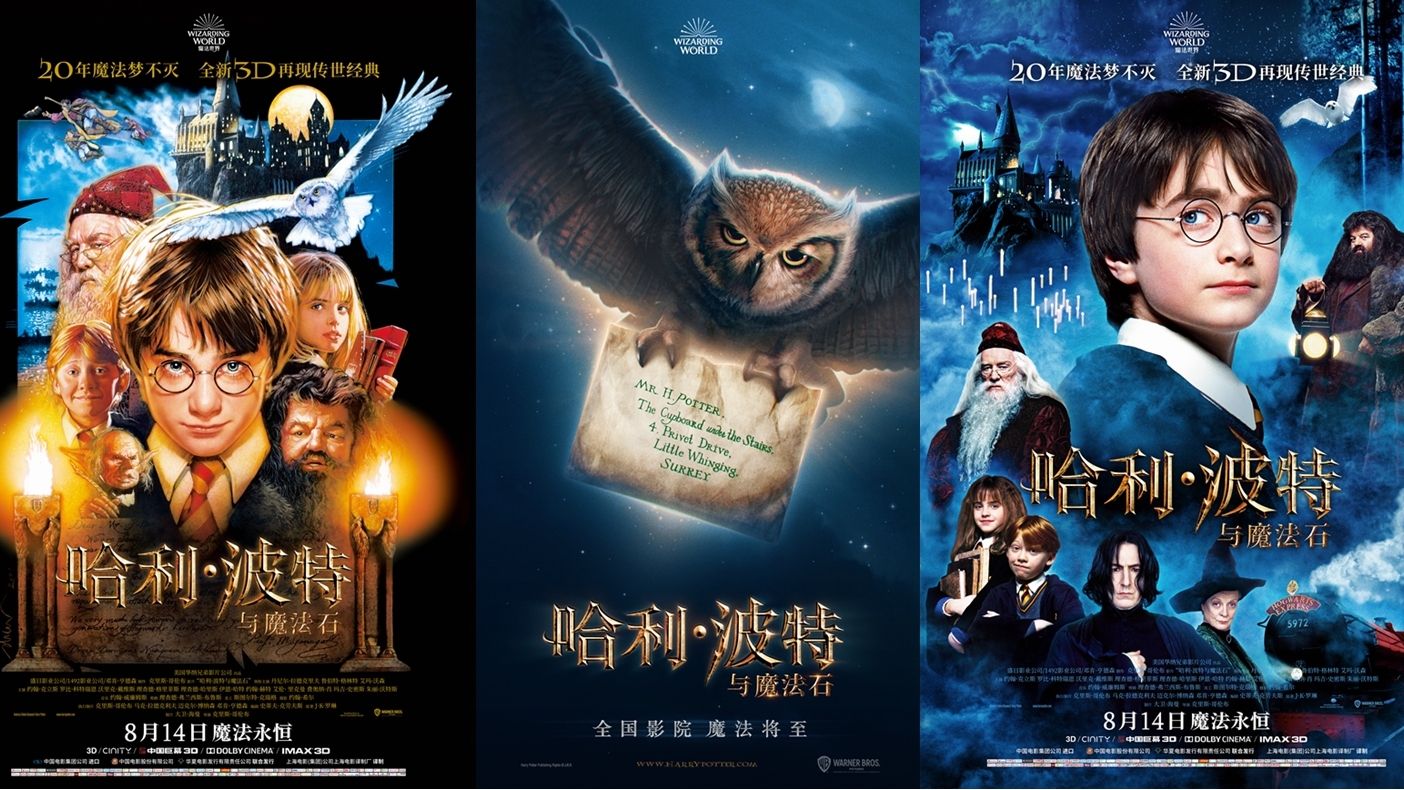 Based on British author J.K. Rowling's 1997 eponymous novel, the fantasy film follows Harry Potter's first year at Hogwarts School of Witchcraft and Wizardry after he discovers that he is a wizard, and depicts his adventures alongside friends.

Scores of moviegoers in China, including loyal followers and new fans, were excited about watching the movie on the big screen, despite many having done so before and others well-versed with the novel.

Rowling's original masterpieces were warmly welcomed in China when the Chinese versions of first three installments were published in 2000. According to Beijing Youth Daily, an estimated 200 million copies of the Harry Potter books have been sold in the country. 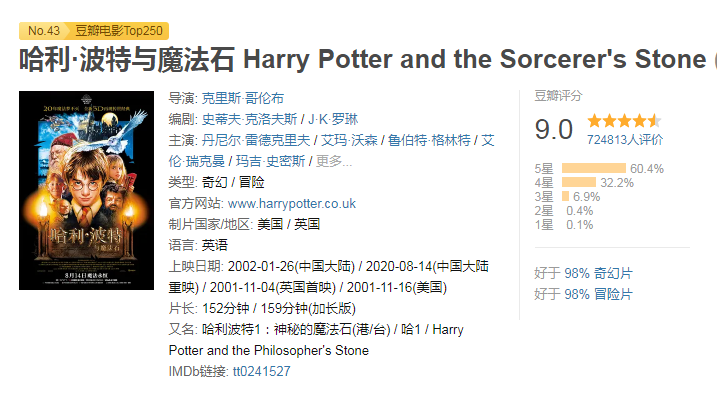 The Hugo Award-winning "Harry Potter and the Goblet of Fire," the fourth book in the series, broke records with 160,000 copies sold throughout the country within its first week of launch in 2001, and drew more than a thousand delirious fans to Beijing Book Mansion, lining up outside one of the capital's biggest bookstore to take a first look.

"I read the Harry Potter books at different ages, and every time I have some new inspiration and insights," Li Junying, a civil servant dressed in a Gryffindor uniform, told CGTN.

"In 'Harry Potter' [Rowling] created a spectacular magical world from what we, human world, could also learn a lot, as it shows many virtues, such as friendship, kinship, and love," he said, adding that he had been looking forward to enjoying the film with other fans. 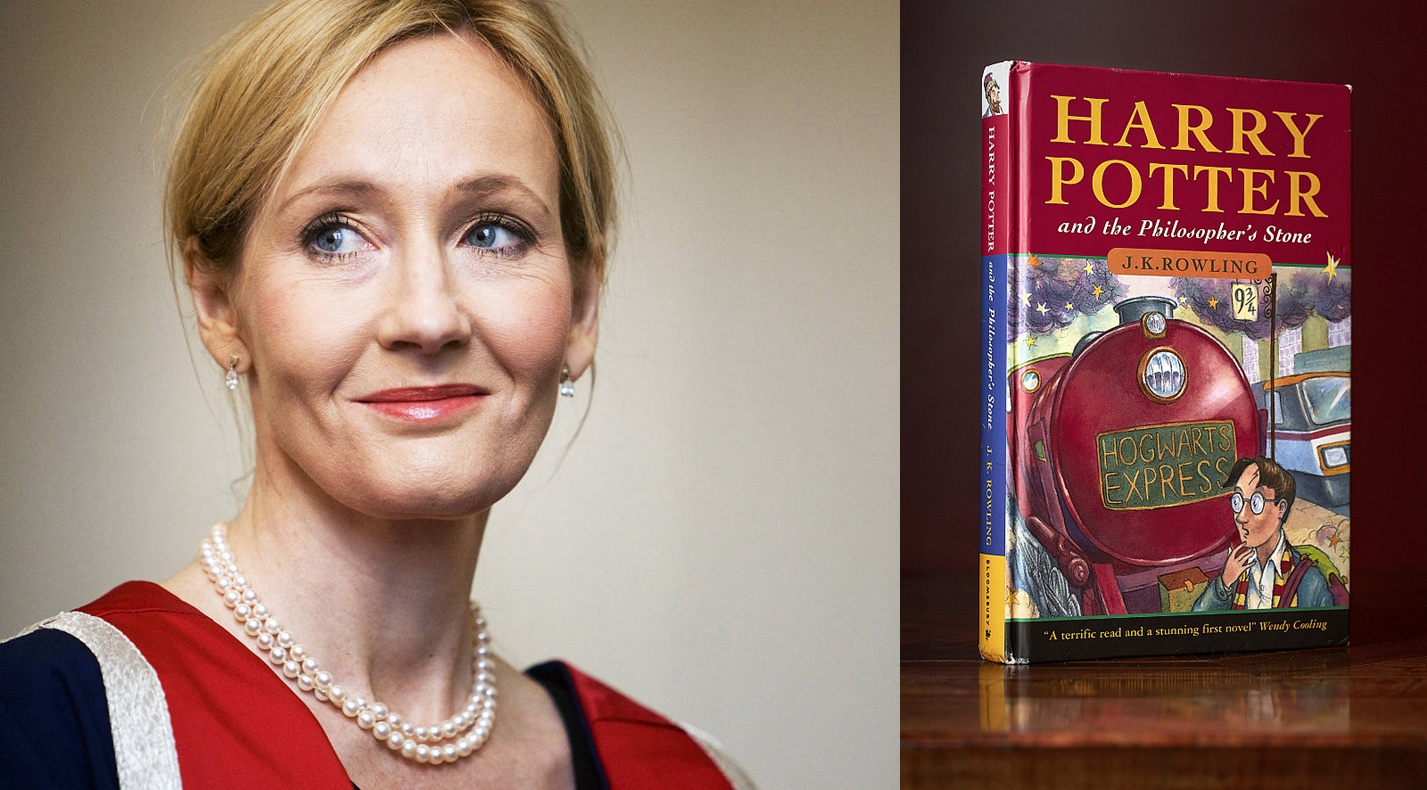 This year marks the 20th anniversary of the franchise landing in China and some regard the 3D re-screening as the ideal way to mark the occasion.

It was a rare chance for them to watch the movie on the big screen with more advanced technology and improved equipment 20 years after its debut.

"I've watched it on television and computer for so many times. I'm still very excited," said Xu Jiujiu, who was donning a Slytherin uniform. "The techniques have improved a lot, and now we have the 3D and IMAX versions."

A memory, a mirror, and utopia

From black wizard robes to the Golden Snitch necklace, fans in uniforms and badges representative of the four houses of the Hogwarts School – Gryffindor, Slytherin, Ravenclaw, Hufflepuff – flocked to cinemas nationwide over the past weekend in what many have described as "Hogwarts School reopening days." 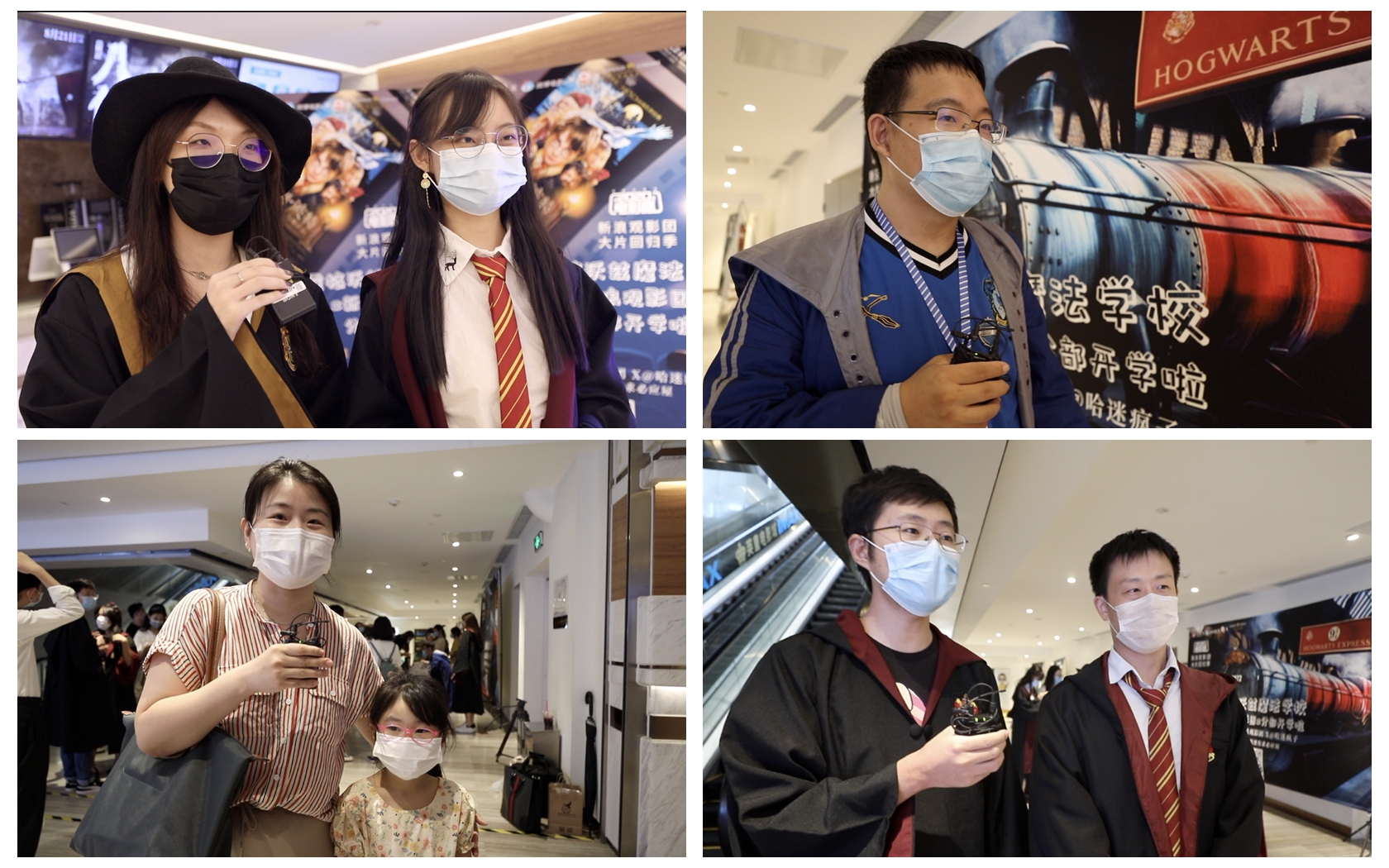 CGTN reporter speaks with some viewers of the film at the Emperor Cinema in Beijing, China, August 15, 2020. /CGTN

CGTN reporter speaks with some viewers of the film at the Emperor Cinema in Beijing, China, August 15, 2020. /CGTN

Prior to the movie's reopening, many Harry Potter fans had taken to social media to express their excitement in reuniting with "the magical world again.”

The hashtag on the film's theatrical re-release in the Chinese mainland has so far garnered 350 million views with 176,000 posts on microblogging platform Weibo.

For many, the fantasy film represents nostalgia, evoking the memories of old times.

"I've been in love with 'Harry Potter' for so many years," Zhang Jin, a mother who brought her six-year-old daughter to watch the movie at the Emperor Cinema in Beijing, told CGTN. "When I had my daughter, I hoped she could share the love [for "Harry Potter"] with me. So I brought her here today." 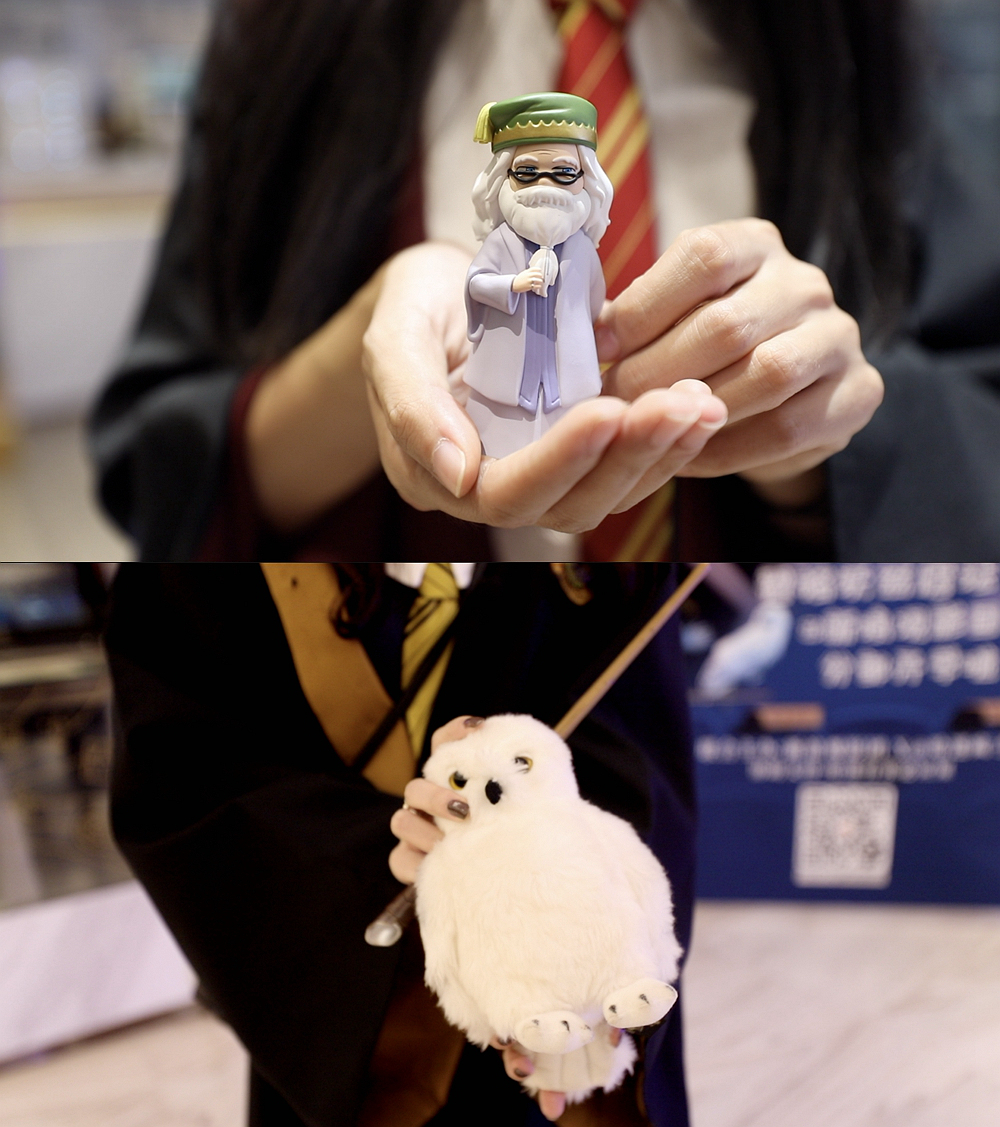 Fans show off their collections of the "Harry Potter franchise. /CGTN

Fans show off their collections of the "Harry Potter franchise. /CGTN

Zhang said she watched the first movie when she was a high school student. "From college to work, it's like I grew up with the characters. So for me, the films signify the memories of youth and nostalgic feelings."

The franchise has a devout following in the country. For them, watching "Harry Potter" in a cinema is guaranteed to provide an escape to a surreal world no matter how many times they have seen the film.

"I have been in love with such kind of fantasy films when I was a little girl, and [The "Harry Potter" franchise] it remarkably created a novel worldview, which was quite innovative at that time," said Xu, noting that the story contains profound meanings and coveys positive outlook in its description of humanity. 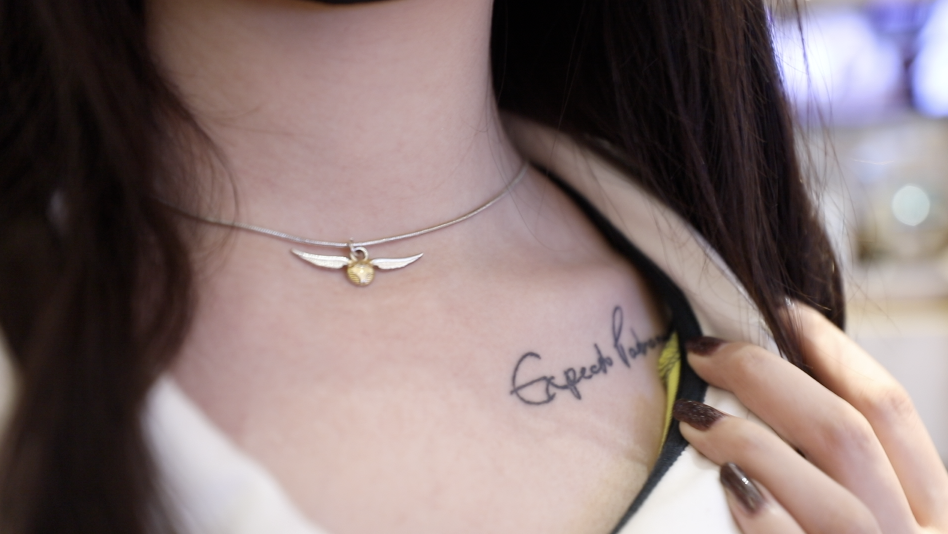 Zhang gets "Expecto Patronum" – a protective spell – tattooed next to her collarbone. /CGTN

Zhang gets "Expecto Patronum" – a protective spell – tattooed next to her collarbone. /CGTN

"There are not only friendship and love, but also a grand worldview, as well as reflections on war and peace," she added.

When asked about the significance of "Harry Potter," an engineer surnamed Liu donning a wizard robe cited a quote from the story, saying: "Help shall always be given at Hogwarts, to those who ask for it."

"It is like an unattainable dream, which is totally different from reality. And all of dissatisfaction or unhappiness you have in the real world can be solved here," said Zhang Yandi, a postgraduate student who got "Expecto Patronum" – a protective spell – tattooed next to her collarbone.

"It's a utopia, where you can obtain infinite powers."