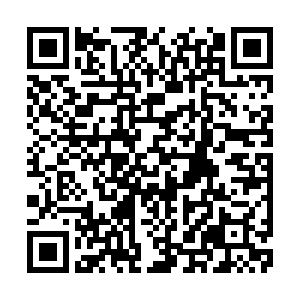 This can be most easily summed up in his two nicknames. The first, his ring name, "The Answer" reflects what is called Fight IQ; his ability to gameplan and adapt to opponents. In his 15-year career, the only men he has fought more than once and hasn't been able to beat are lightweight Benson Henderson and featherweight Jose Aldo, who at time of fighting, were both the champions of their respective divisions.

The reason why the concept of the rematch is so important is that what defines his career is the sensational trilogy he had against lightweight rival Gray Maynard. Edgar lost the first fight, took the second to a draw then won the third by decisive comeback KO.

His other nickname is Iron Man (his initials "FE" are the chemical symbol for iron), or was, as the new found success of the famous Marvel comics character of the same name has forced him to drop it entirely. 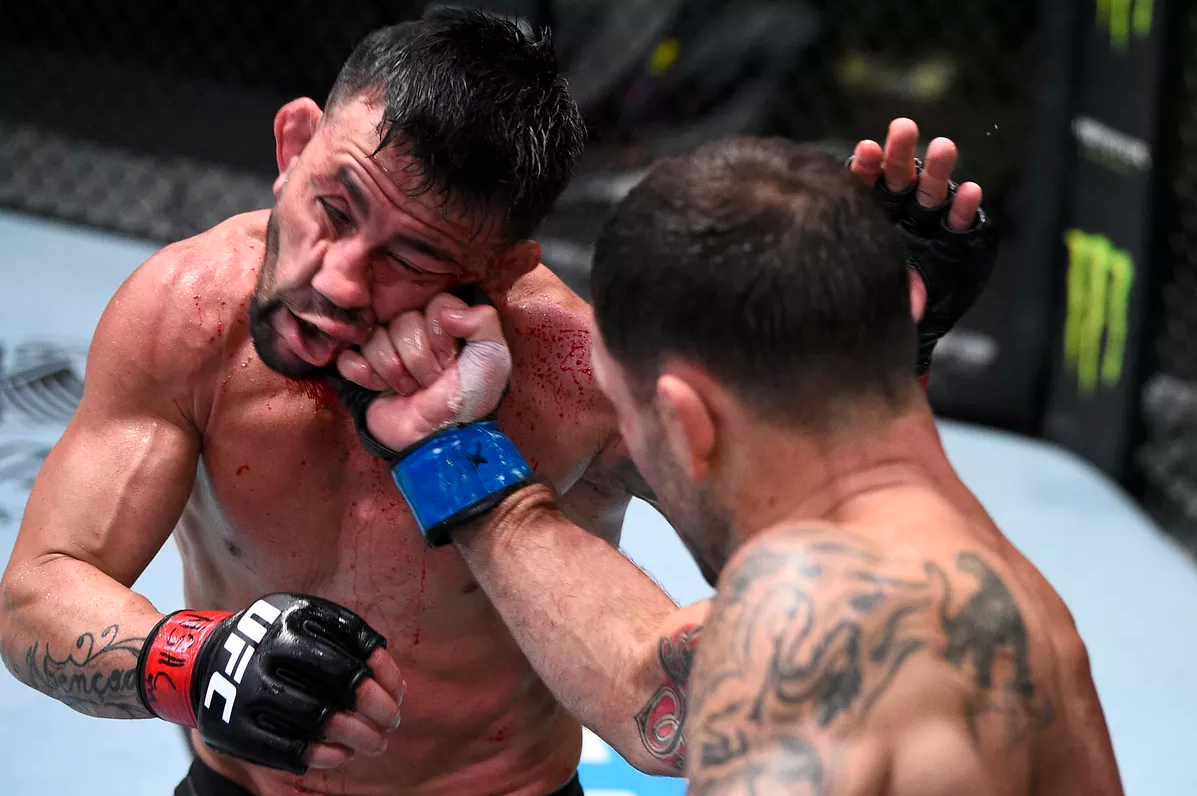 Frankie Edgar hits Pedro Munhoz with an uppercut in their main event bantamweight fight at UFC Fight Night: Munhoz vs. Edgar at the UFC APEX in Las Vegas, Nevada on August 22, 2020. /Zuffa LLC

Frankie Edgar hits Pedro Munhoz with an uppercut in their main event bantamweight fight at UFC Fight Night: Munhoz vs. Edgar at the UFC APEX in Las Vegas, Nevada on August 22, 2020. /Zuffa LLC

Edgar is tough and never backs down from anything. Having reached the end of the road at lightweight with two close decision losses to Henderson, he dropped down to featherweight and immediately challenged the champion, Aldo.

He lost by a close decision. He lost but he wasn't beaten; he went on a five fight run at lightweight before challenging again for the title. He lost, again, and followed this up with a 3-1 run. By this point, Max Holloway was champion at featherweight and "Blessed" beat Edgar in his third and final crack at the featherweight belt.

This would have broken lesser fighters. Instead, Edgar decided to simply ply his trade elsewhere and dropped down to bantamweight. His debut fight in the division took place as the five round main event of today's UFC Fight Night: Munhoz vs. Edgar.

Edgar's opponent came into the fight with a great record of 18-4, all at bantamweight, but on a loss to title contender Aljamain Sterling. This wasn't a tune up and, knowing how he fights, Edgar wouldn't have wanted it to be.

He may be 38 years old and fighting at 135 lbs – 20 lbs lower than the weight he started his career – but Edgar started Round 1 looking as energetic and nimble as ever. He fought the exact same way too, using his fast footwork to encircle his opponent then lead with a leg kick and follow with quick one-two-three punch combinations. 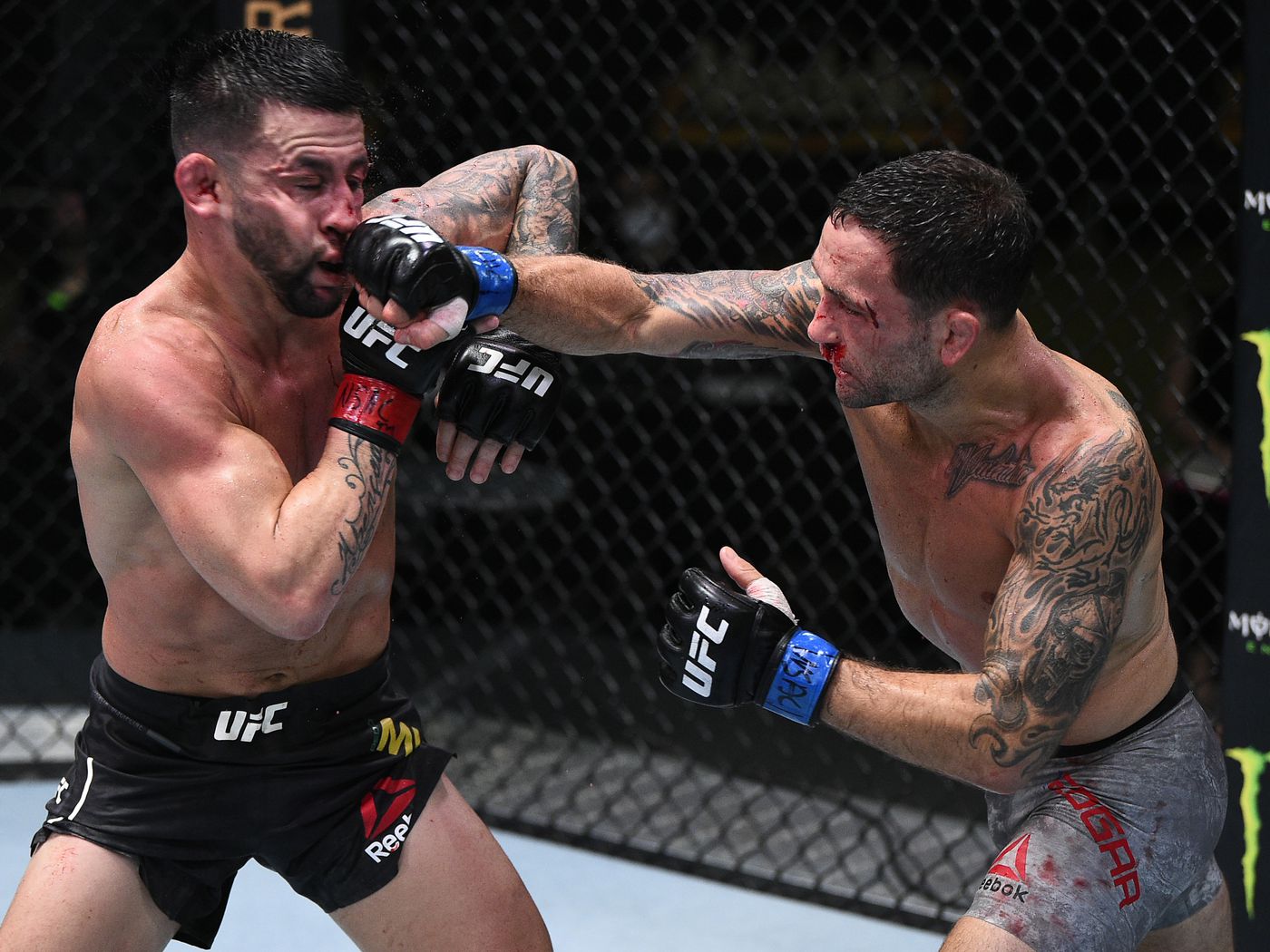 Looking at him work, the difference between Edgar and Aldo, another former featherweight who has dropped down a division, is that it feels as if Edgar was undersized at lightweight and more of a correct fit at bantamweight; Aldo looks like he's killing himself.

The fight remained almost dead even throughout the first two rounds. Edgar outworked Munhoz and gradually added takedowns and back kicks to his game while Munhoz was willing to take a few to land a few. The smaller cage at the UFC APEX made sure neither man could get too far away from the other, so the action was consistent.

It looked as it Edgar would cruise to victory, and the in Round 3, Munhoz started loading up with hard right hands and kicks to the legs and body, offsetting Edgar's pace. The more damage he inflicted, the slower Edgar got.

By Round 4, his lateral movement had slowed to a snail's pace and the standup battle had inverted. Munhoz was doing damage with every jab and hook, and Edgar was absorbing it to pepper him with his own combos. His takedowns had been completely neutralized too by the damage done to his legs.

In the main event rounds, he reminded everyone why he's "The Answer". He started with a takedown to throw Munhoz off his rhythm, used multiple jabs to prevent him from throwing big punches and had the short uppercut ready to clip Munhoz if he did manage to lean in with a power punch.

It was ultimately enough for Frankie Edgar who won a close split decision (48-47, 46-49, 48-47). The two judges who scored in Edgar's favor must have prioritized volume over damage and the other judge vice versa. This was very much a bout where Edgar won more rounds but Munhoz won the fight cumulatively – however, only one of those things matters in the end.

Edgar now joins Conor McGregor in the exclusive club of fighters who have won in three different divisions and is the only person to do so by moving down, not up. Unfortunately, as with his move to lightweight, it feels as if he has arrived a little too late to make a serious run at the strap, but his performance against Pedro Munhoz shows he's still as tough as iron.