It's time to improve waste management in China
Chen Meian 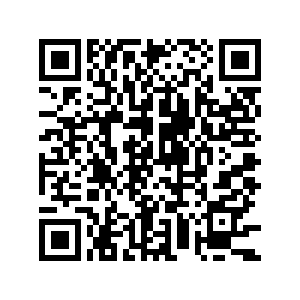 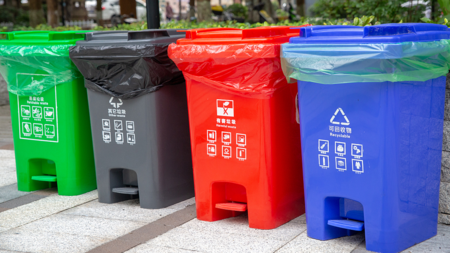 Editor's note: Chen Mei'an is a senior analyst from Innovative Green Development Program, a Beijing-based climate policy think tank. The article reflects the author's opinions, and not necessarily the views of CGTN.

The last three years have seen China's policymakers pay more attention to the country's worsening waste problem. In 2018, China's municipal solid waste (MSW) reached 22.8 million tonnes, a quantity that is expected to climb up to 409 million tonnes by 2030 as China continues to urbanize and grow economically. This swelling volume of garbage poses a threat to both the environment and the climate.

In 2017, China launched a pilot program of new waste sorting regulations in selected cities, and policymakers are now planning a national scale-up. In late April this year, the Chinese government approved changes to the Solid Waste Law, making waste sorting a core element of the revised law.

This means that more cities are going to adopt the new waste sorting regulations that were first tested in the pilot program. Innovative Green Development Program, a Beijing-based climate policy think tank, estimates that if the regulations are fully implemented across China, greenhouse gas (GHG) emissions will be reduced by 80.82 million tonnes CO2e between 2020 and 2030. This is equal to the emissions from 17.46 million passenger vehicles driven for one year.

These are positive developments, but to see these benefits China will have to make sure that the new regulations are aptly implemented.

Unlike the previous waste sorting system, which only had the two categories of recyclables and residuals, the new regulations placed an emphasis on the collection and disposal of perishables, which account for approximately 60 percent of MSW and are a major contributor to the waste sector's GHG emissions.

With the passing of the revised Solid Waste Law this year, which will take effect on September 1, these new and improved waste sorting practices will spread to China's 294 prefecture-level cities. As perishables will be treated separately in this new system, not only will less garbage be sent to landfills or incinerated, GHG emissions from landfills will also drop. 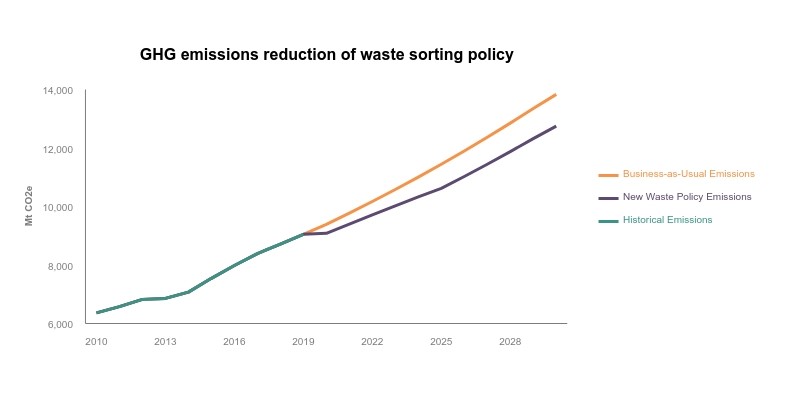 Data from China's national communications on climate change to the United Nations Framework Convention on Climate Change (UNFCCC) shows that its GHG emissions from waste management have been growing rapidly, with 70 percent comprising of methane. China's new waste sorting policy will cut these emissions, particularly methane, which has high global warming potential despite its short lifespan.

As the new waste sorting rules are implemented, we can expect GHG reductions in the following two areas: 1) from landfills and incineration, because the separate collection of perishables will reduce the amount of mixed garbage, and 2) from replacing fossil fuels with biogas, because one of the uses of perishables, particularly food waste, is that they can be used to create biogas for heat and electricity generation.

Of course, this all hinges on how well China is able to implement the new waste sorting policy.

Chinese cities will be required to develop comprehensive waste sorting systems that ensure proper collection and treatment of perishables, but this is a complicated task. iGDP research has shown that while most pilot cities have developed a system to measure and track performance at each stage of the waste sorting process (e.g. separate collection, transport, disposal, etc.), only 10 percent of these cities have developed a system to evaluate the final result of waste sorting as a whole.

Another challenge lies in motivating the public to participate in the national waste sorting effort. China's households have been wondering if their sorted garbage is getting mixed up again in later stages of processing. Each stage of the sorting process needs to be well managed so that the people feel confident that their efforts are not going to waste.

Going forward, another way to improve waste management and reduce GHG emissions will be to reduce waste generation in the first place, especially food waste. This is a policy area that will need to receive more attention in the coming years.