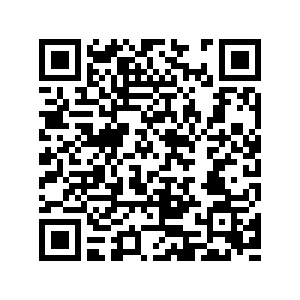 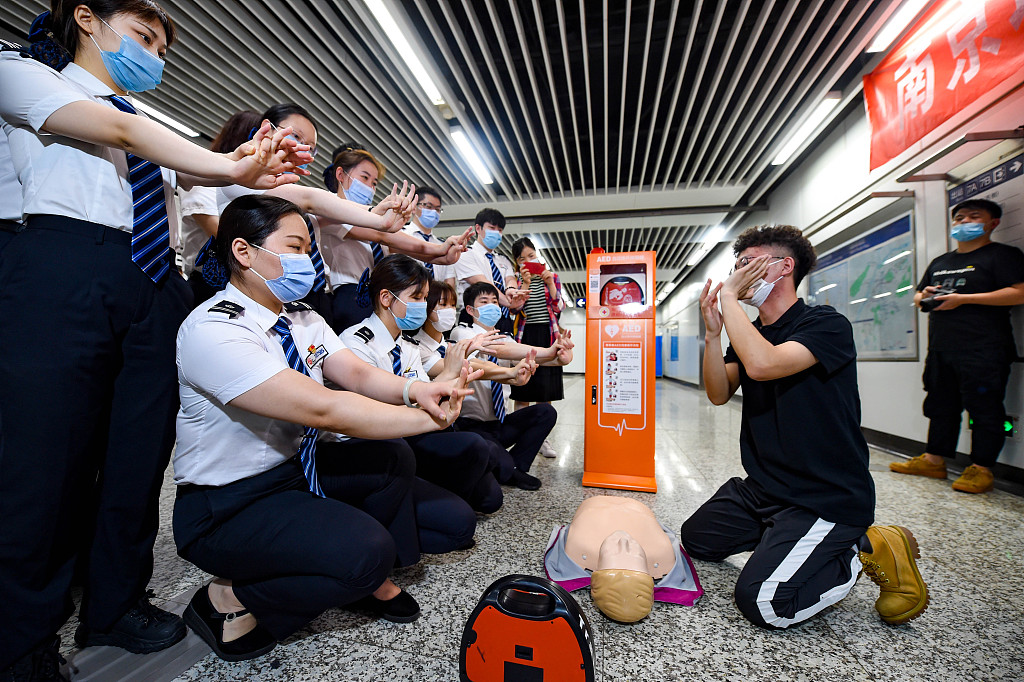 A worker from Nanjing Red Cross society is training subway employees CPR and the use of AED in a subway station in Nanjing, Jiangsu Province, China, June 18, 2020. /VCG

A worker from Nanjing Red Cross society is training subway employees CPR and the use of AED in a subway station in Nanjing, Jiangsu Province, China, June 18, 2020. /VCG

China's Ministry of Education has asked all public schools to teach students first aid and cardiopulmonary resuscitation (CPR) as part of children's health education to address the public's lack of knowledge and competence to step in during a first aid emergency, according to a joint statement by the Ministry of Education and Red Cross Society of China on Monday.

There are as many as 550,000 sudden cardiac deaths in China every year, meaning one person dies per minute due to cardiac arrest, according to the National Center for Cardiovascular Diseases (NCCD). About 60 percent of these deaths occur outside hospitals and the survival rate of a patient who received the CPR outside hospital is less than 4.5 percent in China, compared with about 47.5 percent in developed countries.

"The first reason for the gap is the lack of basic knowledge of CPR," Ao Hushan, chief physician of Fuwai Hospital of Chinese Academy of Medical Sciences told CCTV, adding many don't know how or where to learn it.

He said that cases of cardiac arrest have been increasing in the country year on year and factors like fast-paced living, overworking, high pressure and an aging population have contributed to this.

In November 2019, 35-year-old Taiwan model-actor Godfrey Gao died after he suddenly collapsed while filming a reality show. He was rushed to the hospital and declared dead from sudden cardiac arrest after nearly three hours of rescue. His death sparked a heated discussion.

Sudden cardiac death is described as death caused by an abrupt loss of heart function. CPR and AED are the first and most effective method to treat cardiac arrest, according to medical experts. Most patients will begin to develop irreversible brain damage within four to six minutes after cardiac arrest, and then biological death within a few minutes. Therefore, correctly doing CPR for the patient within four to six minutes is extremely vital for life-saving. 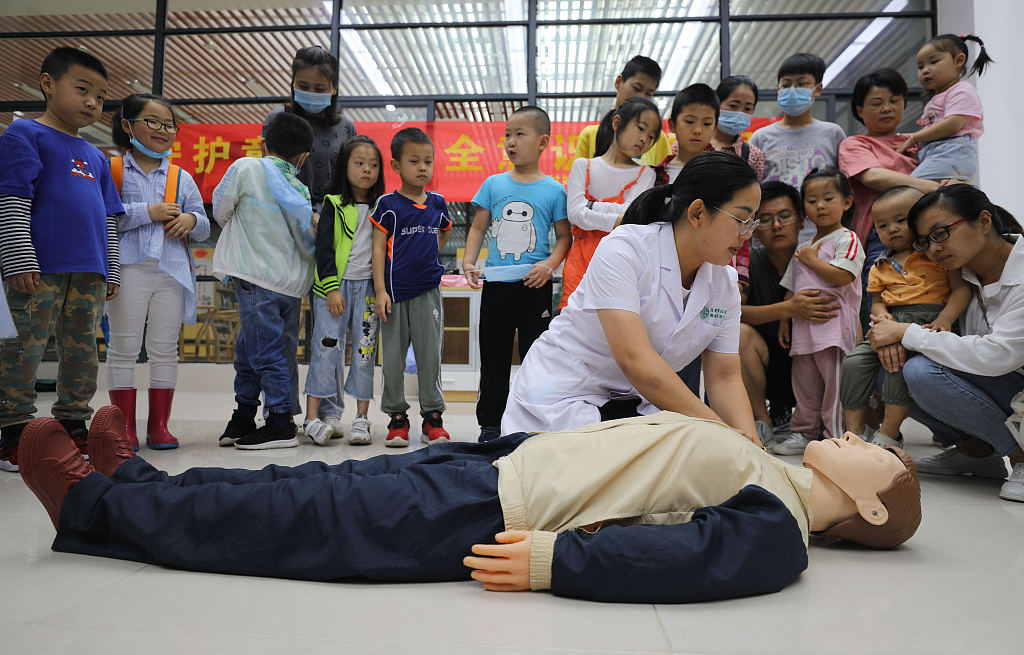 However, besides medical staff, the public in China is severely lacking in knowledge of first aid compared with developed countries and the number of people who have received first aid training stands at a mere one percent. In the city of Beijing, the rate is slightly higher at four percent.

In 1966, the American Heart Association advocated the popularization of CPR among the public. It stipulated that police officers, drivers, firefighters, teachers and students of colleges and secondary schools must receive CPR training and on-site rescue. A 2017 survey showed that 65 percent of Americans had received CPR training.

In European countries, Switzerland requires all citizen to be trained in first aid, including CPR. And in Germany, every citizen must be trained before getting their driver's license, which means some 80 percent of the country has received first aid training. Forty percent of people in France are also first aid trained, according to a 2018 report released by the NCCD.

Evidence shows that survival rates from cardiac arrest are up to three times higher in countries that teach CPR in schools. According to The British Red Cross "up to 59 percent of deaths by injury could be prevented in the UK if first aid was given prior to the arrival of medical services."

"A CPR session can be completed in anything from 45 minutes to two hours depending on what's included. Basic first aid sessions can be completed in short sessions from as little as 30 minutes, which don't cost too much time to students, but will make a huge difference in saving lives," Guo Malong, a doctor in Henan Orthopaedic Hospital told Xinhua.