The power of ice and snow: All you need to know about the World Winter Sports Expo
Chen Rong 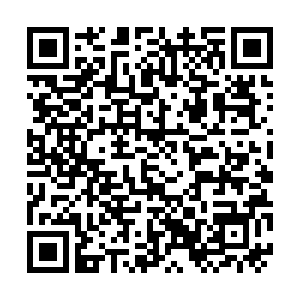 Thousands of influencers in the winter sports industry will gather at the annual World Winter Sports (Beijing) Expo in the coming week.

The WWSE, in short, has grown into one of the largest and most prestigious expos in world winter sports industry ever since it debuted in 2016.

The annual event has been committed to integrating winter sports industry resources. Aimed at establishing communication channels for global winter sports while showcasing the products and service chain from the industry.

Carrying forward the Olympic spirit, the event is also one of Beijing's multiple initiatives to engage "300 million people on the ice and snow." 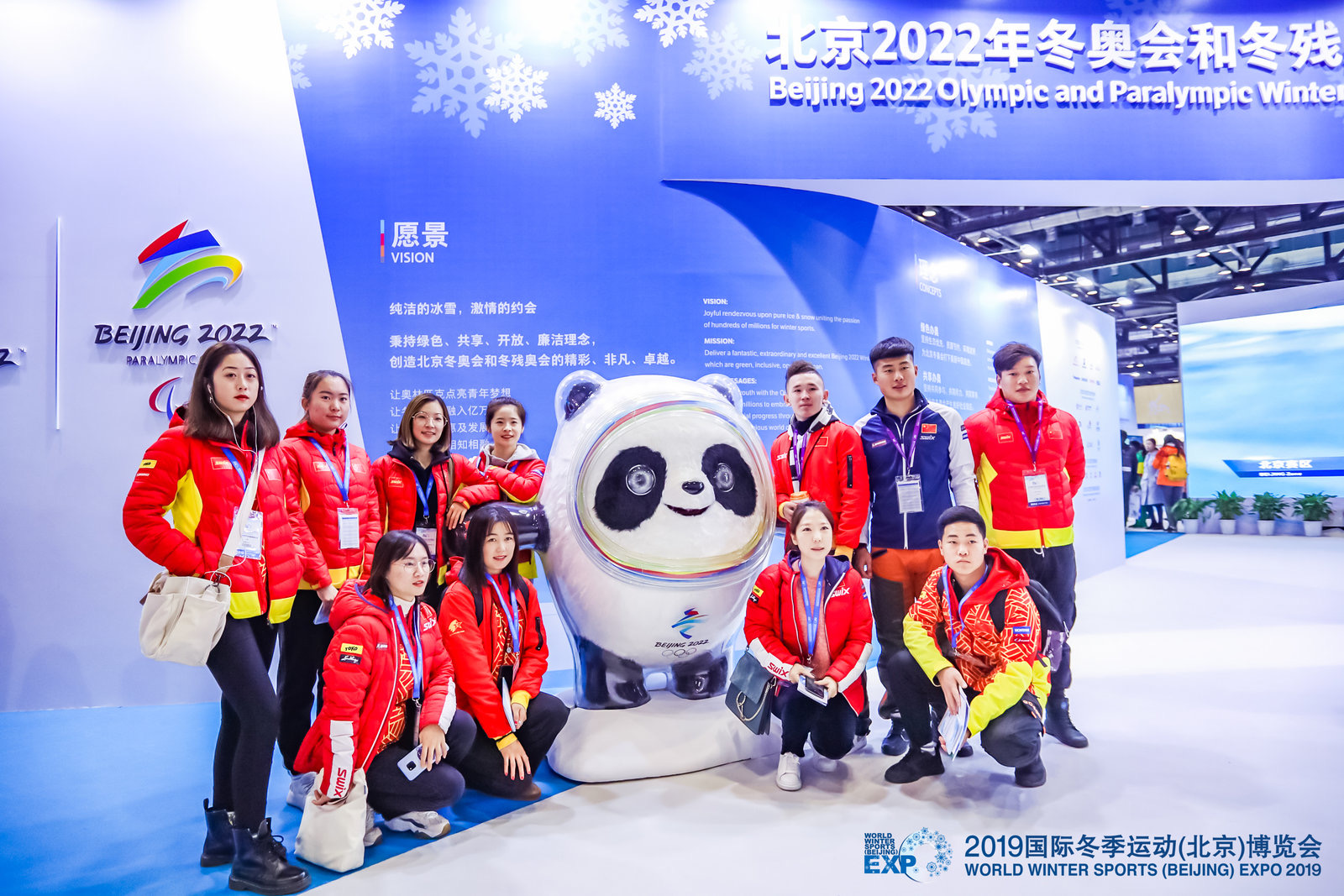 At the WWSE 2019, visitors have a photo with Bing Dwen Dwen, one of the official mascots of the Beijing 2022 Winter Olympic Games. /WWSE

At the WWSE 2019, visitors have a photo with Bing Dwen Dwen, one of the official mascots of the Beijing 2022 Winter Olympic Games. /WWSE

By bringing together the winter sports industry, the World Winter Sports Expo is the perfect platform, said Thomas Bach, president of the International Olympic Committee (IOC).

IOC vice-president Juan Antonio Samaranch Jr. said, "To encourage 300 million people to participate in winter sports is not only your aim, but also the IOC's aim. The IOC and international winter sports federations will jointly support China."

"The Expo is a good opportunity to better know China's winter sports and increase people's participation," he added.

China's first Winter Olympics champion and former speed skater Yang Yang, who is also the vice president of the World Anti-Doping Agency (WADA), has encouraged generations of Chinese people advance the winter sports across the country.

"There is a shortage of talents in all aspects of the ice and snow industry. In the past few years, China has made some achievements in competitive performance."

"If we can combine the efforts of schools, society, club enthusiasts and other related groups in the sports industry, it will be of great benefit to the popularization of ice and snow projects," she commented.

Five years on, WWSE has grown into a leading platform in showcasing the winter sports industry. Here is a review of what the expo has done en route to its success.

Following Beijing's successful bid to host the 2022 Winter Games, the first WWSE took place in 2016 with the theme of "Opening the future." Multiple programs, such as a world ice and snow think tank, start-up contest in ice and snow industry, were launched to encourage millions more to take up winter sports. 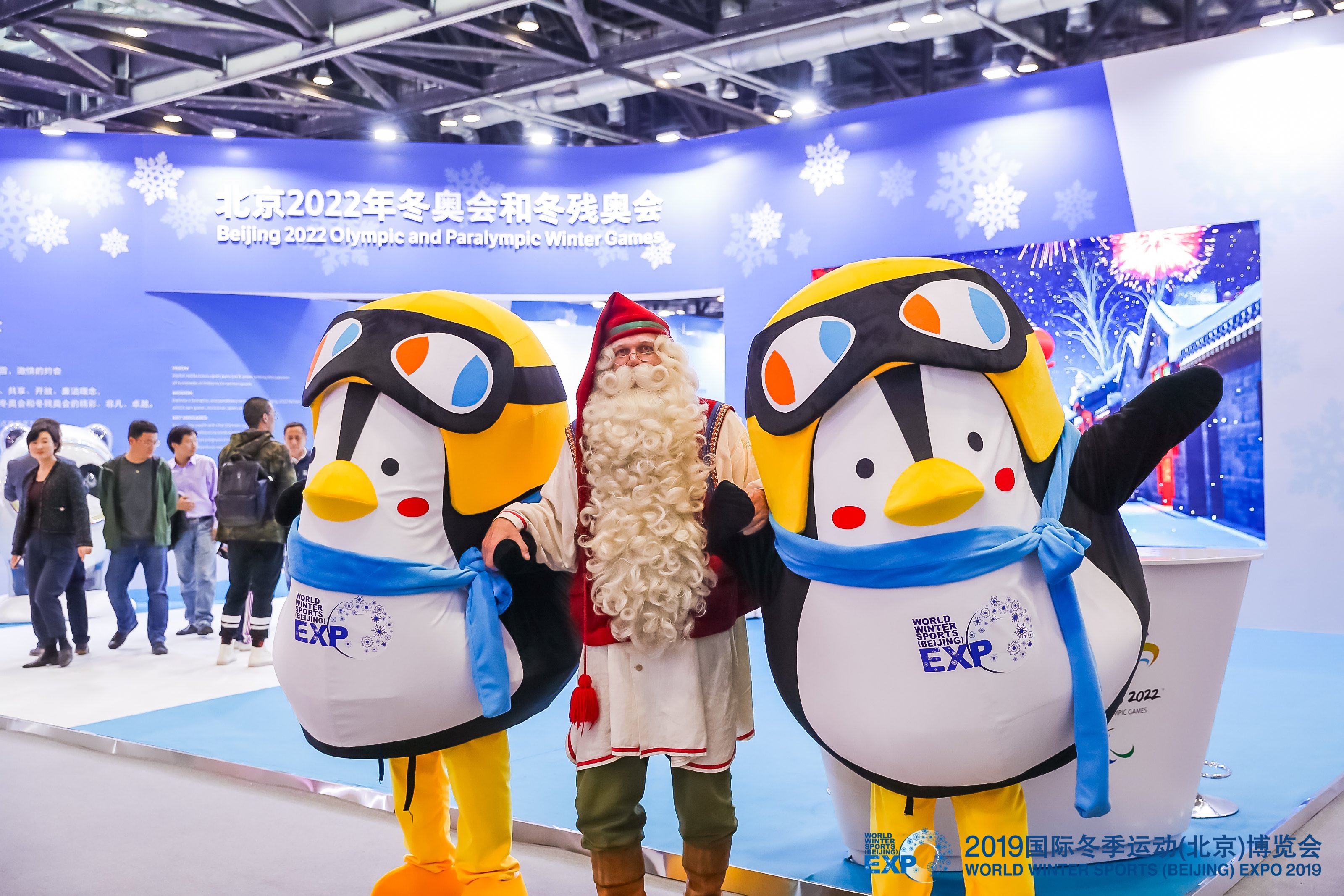 Cosplayed penguins and Santa Claus at the WWSE 2019. /WWSE

Cosplayed penguins and Santa Claus at the WWSE 2019. /WWSE

Under the theme of "leading the way," the WWSE 2017 initiated the "Guest Country of Honor" program to promote full cooperation and mutual development of global ice and snow resources with China.

Switzerland was the very first "Guest Country of Honor," with winter traveling destinations such as Schilthorn and St. Moritz showcasing in the expo. 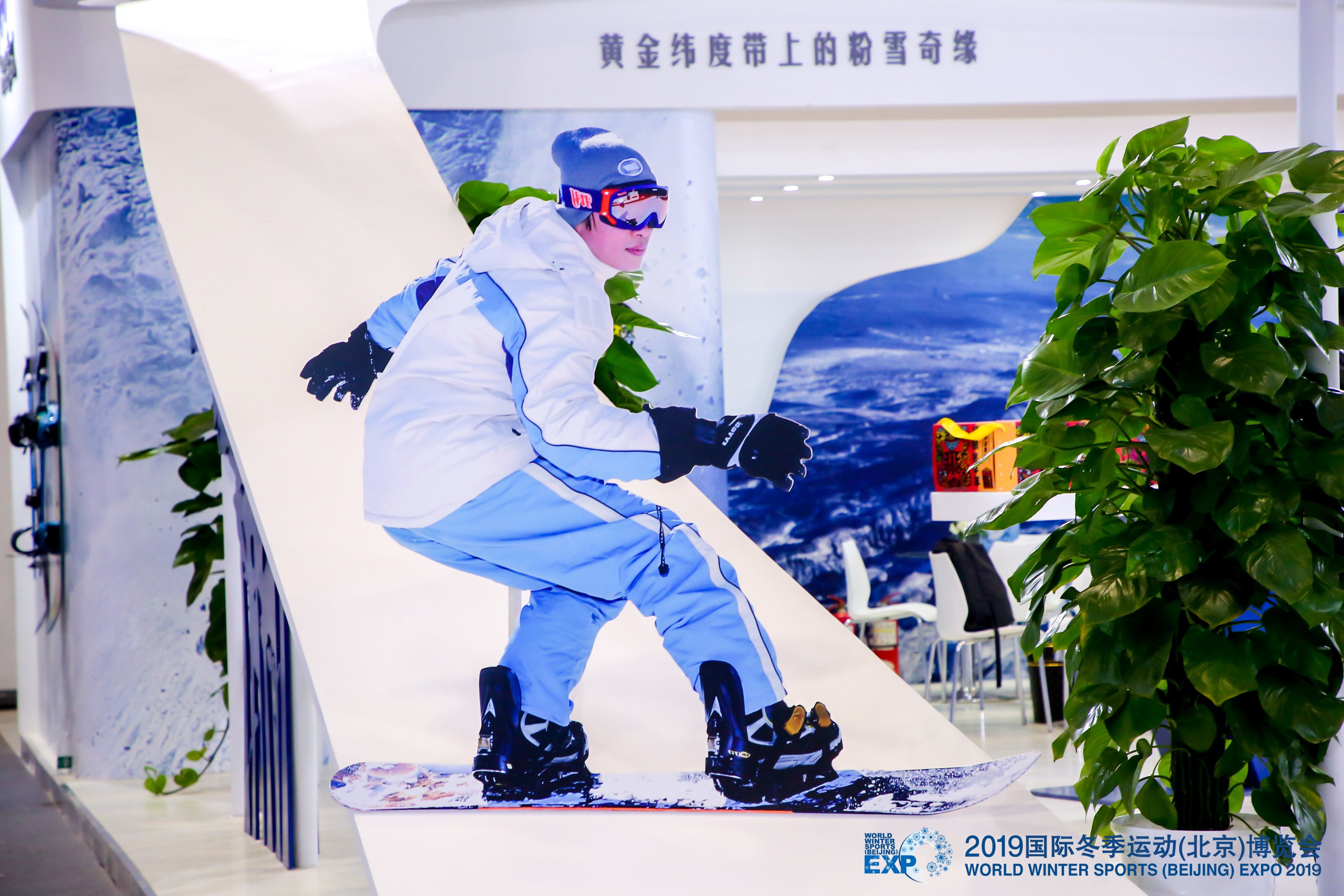 The WWSE kept its theme of "The power of ice and snow" since 2018. Austria was the "Guest Country of Honor" at the WWSE 2018, where winter sports such as skiing, biathlon, were largely promoted among Chinese people with the coordination of International Ski Federation (FIS) and International Biathlon Federation.

"We know that 80 percent of China's skiers are beginners, for whom safety is paramount. They should enjoy winter sports without fear. Therefore, relevant safety training is important," said FIS Secretary-General Sarah Lewis. 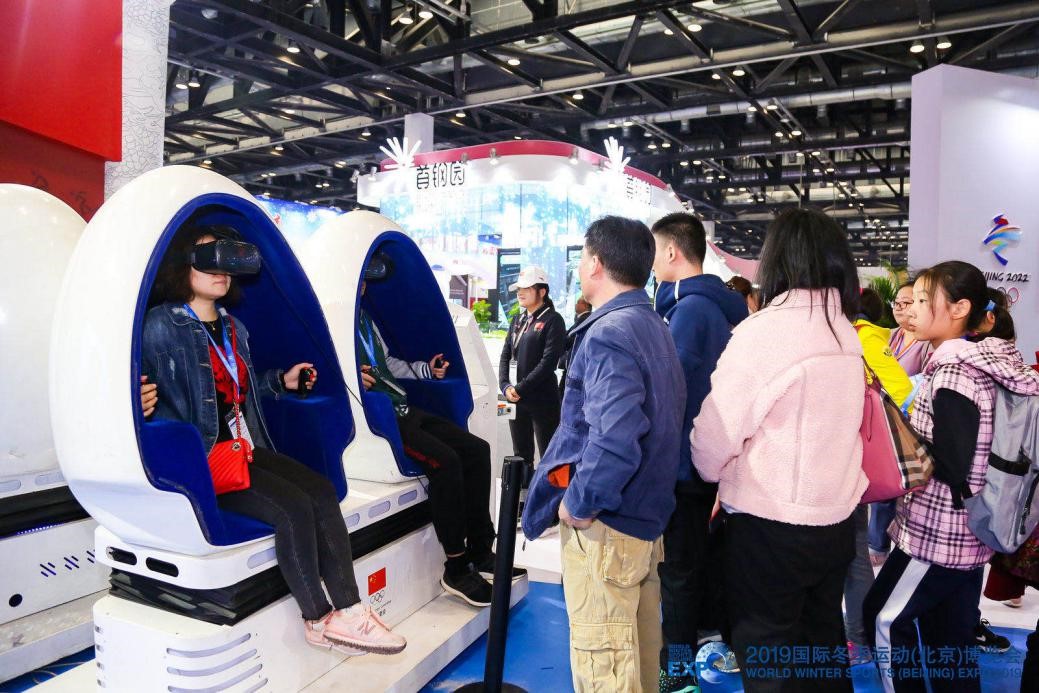 The WWSE has scaled up its 2019 event with highlighted international, industrial and public-oriented features. FIS president Gian-Franco Kasper said he believed the third WWSE showed the maturity of China's winter sports market.

Finland was the "Guest Country of Honor" at the WWSE 2019, extending the friendship between the two nations as China-Finland Year of Winter Sports 2019 launched in January. 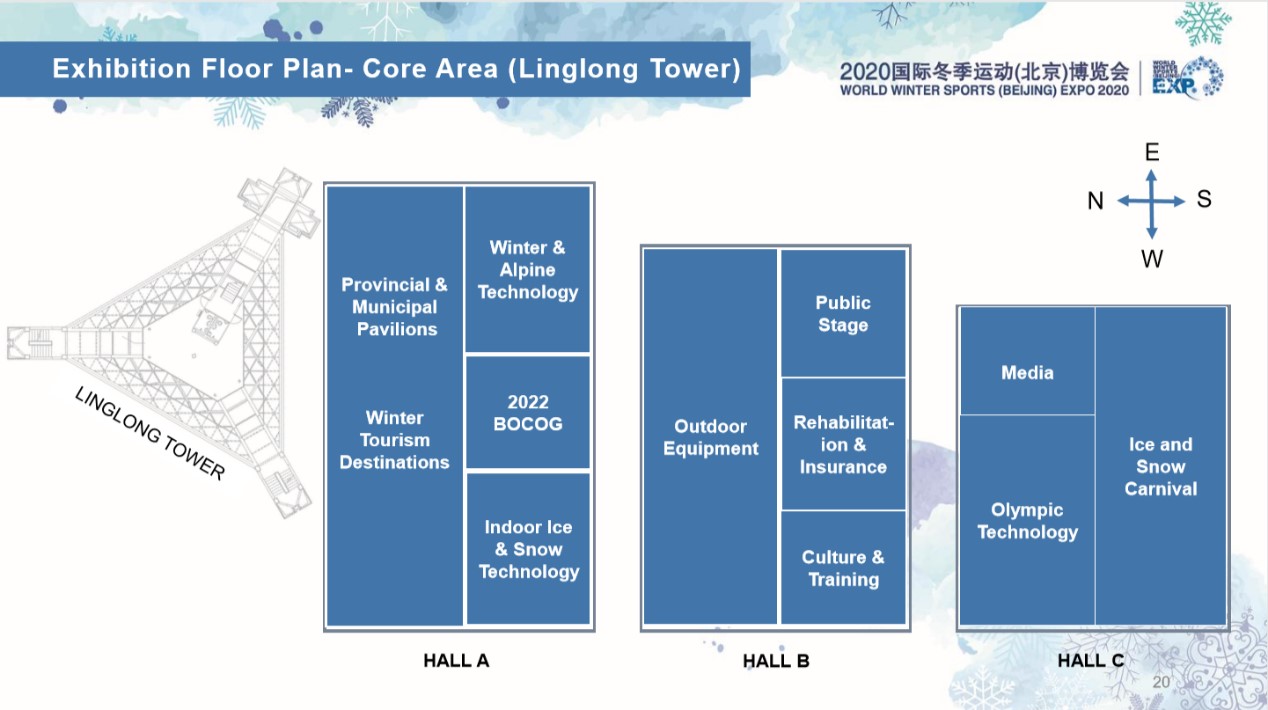 It is the first time that the WWSE will be one of the eight major events during the China International Fair for Trade and Service.

As a gathering of ice and snow industry, the WWSE will emphasize the essential role of the winter sports industry in global service trade.

Exhibitions: the Beijing organizing committee for the Olympic Games (2022 BOCOG) will showcase how the country has prepared for the upcoming Winter Olympics at Hall A, along with outdoor equipment and Olympic technology at Hall B and Hall C respectively.

Forums: over 260 professional elite guests will speak at about 20 parallel forums at WWSE 2020, sharing perspectives on topics of Olympic city development, resorts operation and management, venue design and construction, and population of winter sports among teenagers.

Cloud WWSE: a five-day online display will be held for the first time. Exhibitors can choose to continue displaying on online WWSE platform. Online visitors can enjoy exclusive live broadcast display and personalized exhibition visiting while exhibitors can also have online transactions via smart matching.