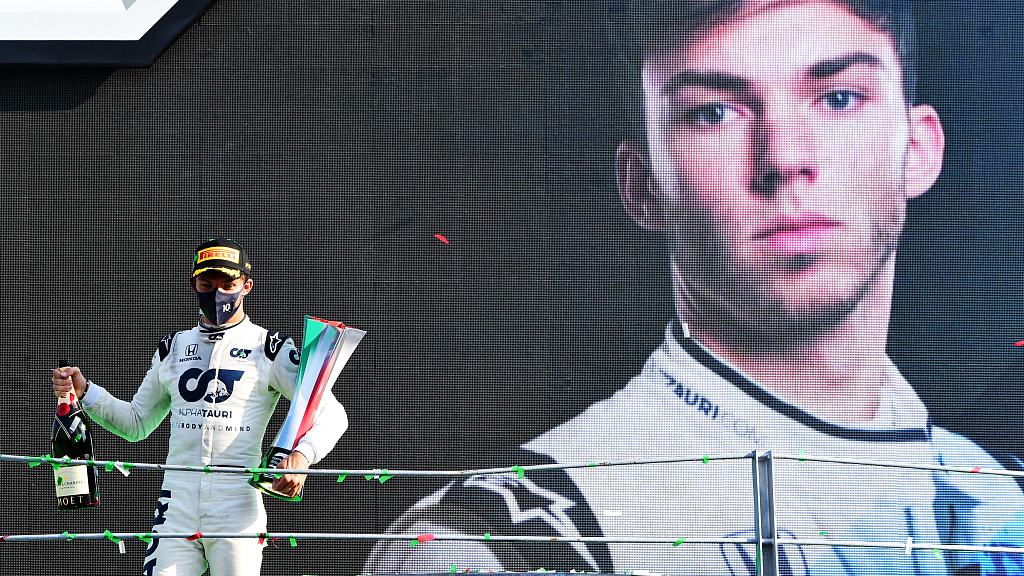 Race winner Pierre Gasly of France and Scuderia AlphaTauri celebrates on the podium after the Italian Grand Prix in Monza, Italy, September 6, 2020. /VCG

Race winner Pierre Gasly of France and Scuderia AlphaTauri celebrates on the podium after the Italian Grand Prix in Monza, Italy, September 6, 2020. /VCG

France's Pierre Gasly won the Italian Grand Prix representing Scuderia AlphaTauri from 10th on the grid on Sunday, becoming the first driver out of the big three – Mercedes, Ferrari, and Redbull – to top the podium in seven years, 147 races.

"It's unbelievable," gasped Gasly, who was demoted by Red Bull's main team last year in a switch with Alexander Albon but has come on in strides in a season disrupted by COVID-19 and without spectators.

"It was such a crazy race and we capitalized on it. I've been through so much in 18 months, I struggle to realize this," added the 24-year-old of his first F1 win.

Mercedes's championship leader Lewis Hamilton finished seventh after starting on pole, leading and dropping to last following a 10-second stop/go penalty for entering the pit lane under a red light during the first of two safety car deployments.

Despite the setback, the six-times world champion fought back and retained his 47-point lead at the top – now over teammate Valtteri Bottas, who made a dismal start and was fifth.

Hamilton, though, equaled a Formula One record with 41st successive classified finish, originally created by Nick Heidfeld at BMW Sauber between 2007 and 2009.

The race had to be stopped at the halfway mark, 27 laps, after Ferrari's Charles Leclerc crashed heavily into the tire wall at Parabolica, emerging unscathed from the impact but still taking a trip to the medical center.