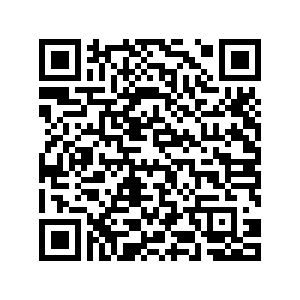 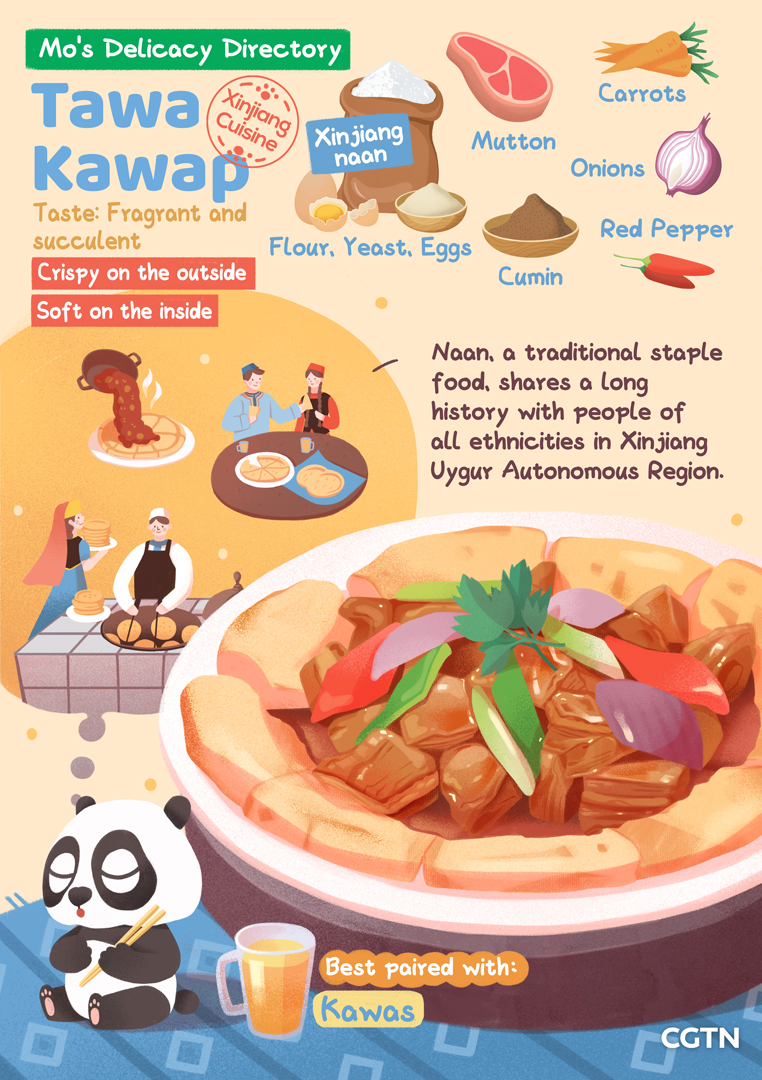 As the saying goes, "One can go without eating meat for three days, but can't live one day without naan." Naan, a traditional staple food, shares a long history with people of all ethnicities in northwest China's Xinjiang Uygur Autonomous Region.

Xinjiang naan is made of fermented dough. It is baked in a clay oven. The golden crispy crust is naan's distinctive feature.

The round-shaped naan has always been a symbol of happiness and fortune. When eating Tawa Kawap, people split the naan and share with each other as sharing blessings. 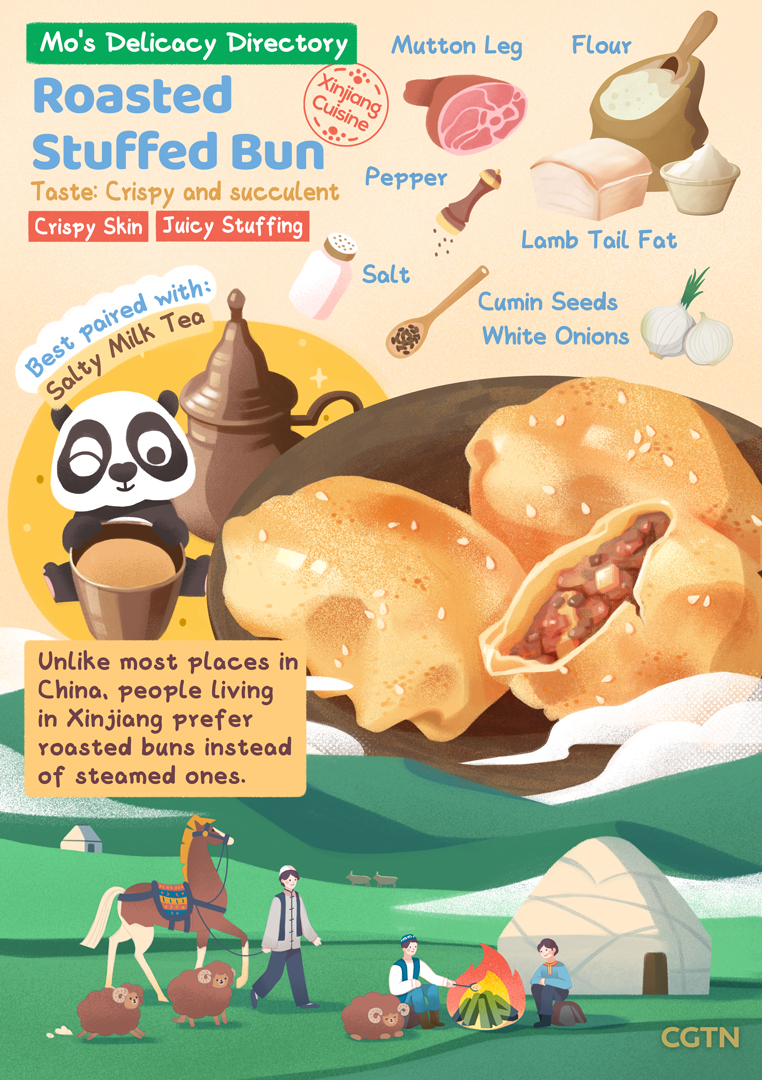 Unlike most places in China, people living in Xinjiang prefer to roast and not steam stuffed buns. This type of bun looks like a small, golden, square-shaped pillow, and is infused with the rich scent of mutton.

Roasted stuffed buns are a part of the traditional nomadic lifestyle. The herdsman of Xinjiang graze cattle and sheep all throughout the year, and they only take simple tools and ingredients with them, such as a knife and flour. During lunch time, herdsmen would chop up mutton and onion for making buns, and then cook them over a fire. After settling down in cities, they started using clay ovens in order to prevent their food from carbon. 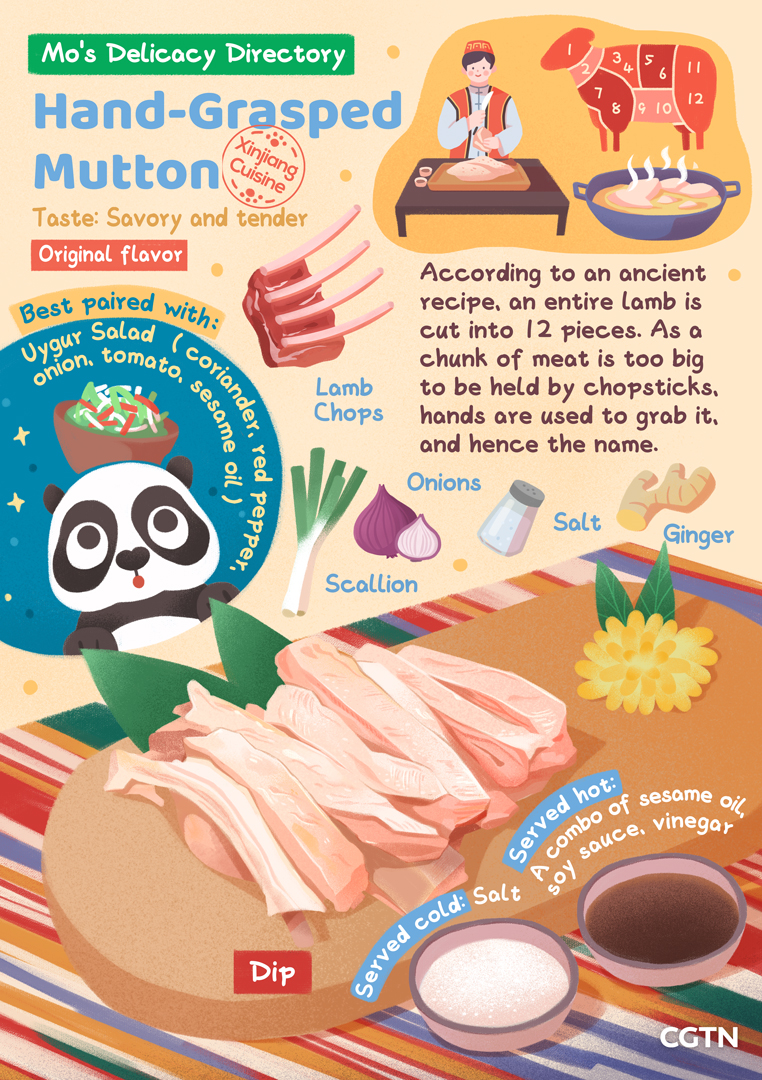 Boiled mutton, or hand-grasped mutton, is a traditional dish of ethnic groups living in northwestern China, such as Mongolian, Tibetan, Hui and Uygur.

The Uygur cooking method is the most interesting of them all. According to an ancient recipe, an entire lamb is cut into 12 pieces and then boiled with simple spices. As a chunk of meat is too big to be held by chopsticks, hands are used when eating, and hence the name. 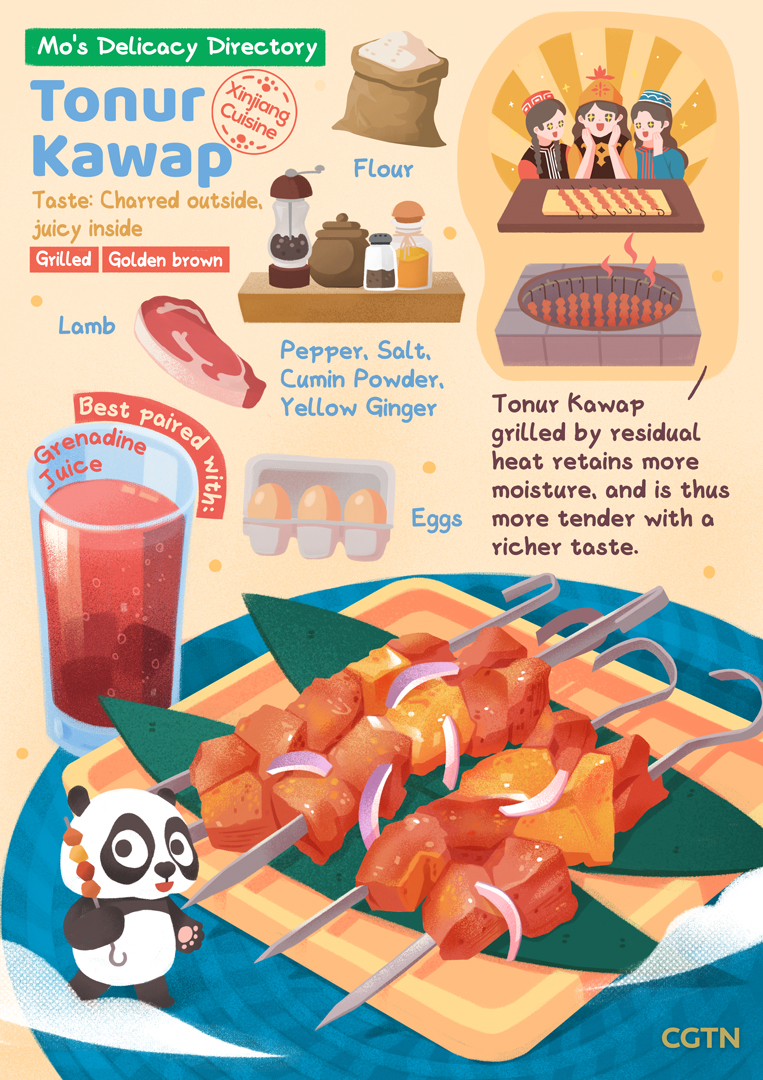 As a paradise for meat lovers, Xinjiang is best known for lamb kebabs, but for locals, there is nothing like grabbing some appetizing, traditional Uygur grilled lamb, also known as Tonur Kawap.

Tonur Kawap has a history of over 500 years. Chefs usually hang lamb chops with iron hooks, and position them close to the inner wall of a heated clay pit. Compared with kebabs, Tonur Kawap grilled by residual heat retains more moisture, and is thus more tender with a richer taste. 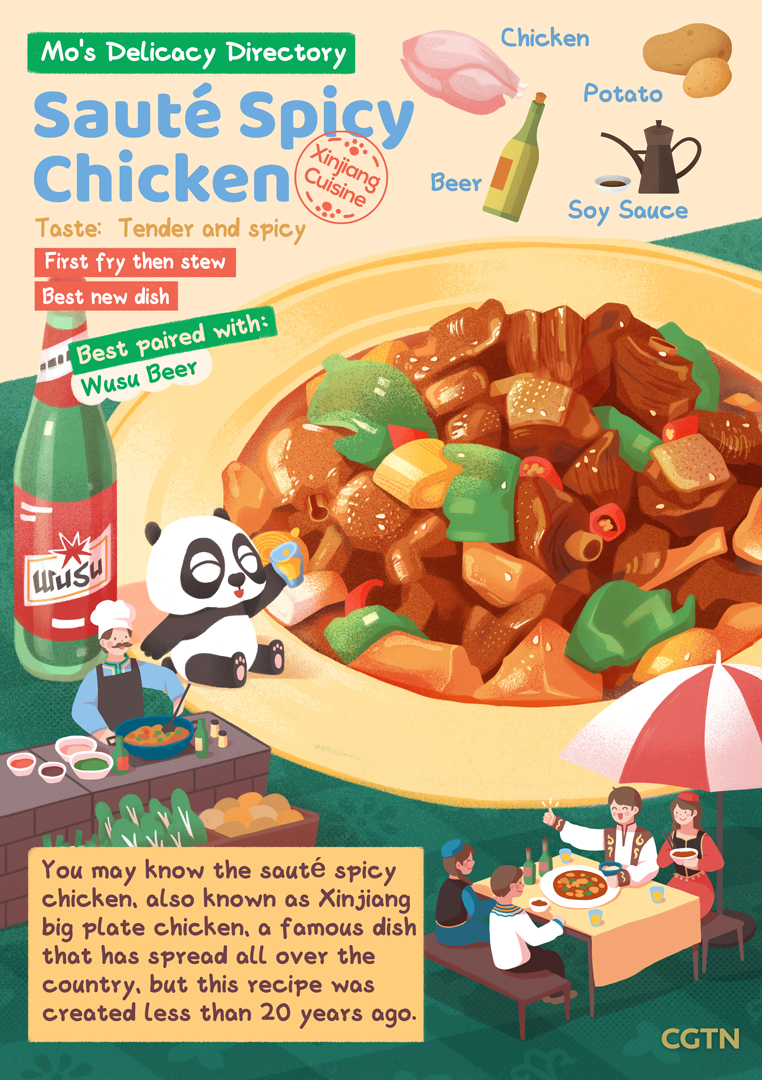 You may know the sauté spicy chicken, also known as Xinjiang big plate chicken, as a famous dish that has spread all over the country. But this recipe was created less than 20 years ago by chef Li Shilin, whose specialty is the sauté spicy chicken. Back then, while his customers enjoyed the taste of the dish, they thought the portion was too small.

This is why Li decided to fry a whole chicken one day, and presented it on a gigantic plate for his guests. After finishing the tantalizing dish, the customers heartily commended that the dish was very satisfying. Since then, orders of "a big plate of chicken" have been pouring in. 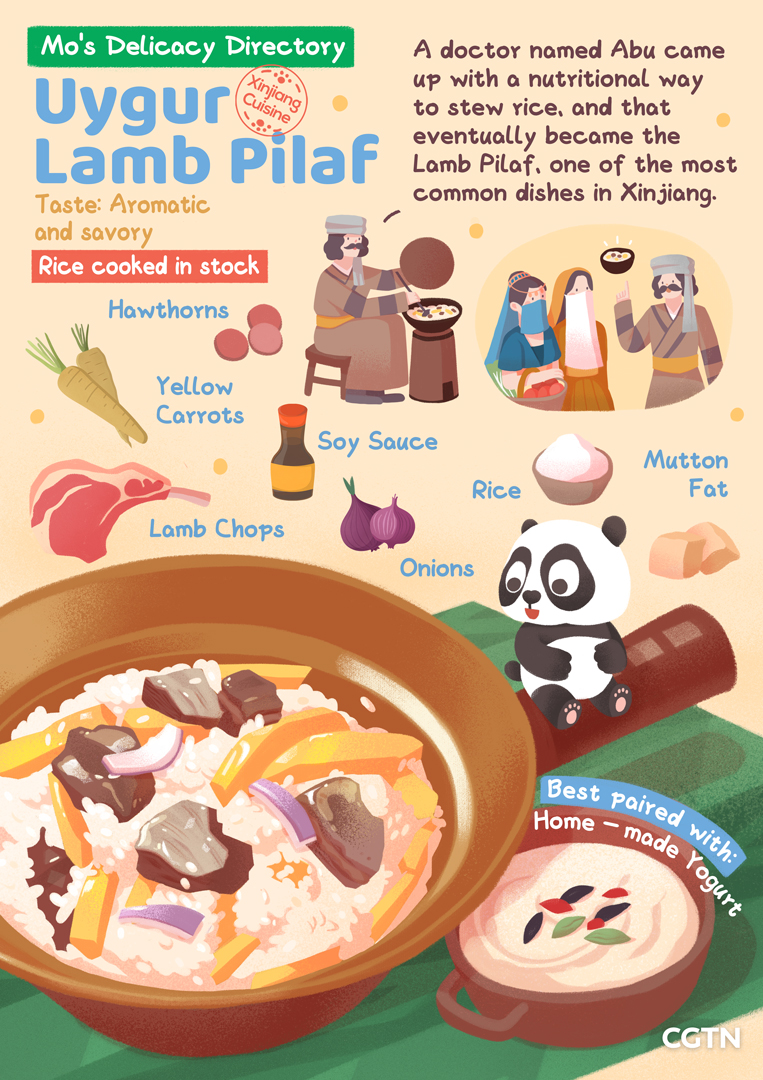 Mindful eating is one of the most popular topics of today. But a thousand years ago, Xinjiang forefathers already had their own recipe for healthy eating – the pilaf.

According to local legend, a doctor named Abu was in poor health, and medication did not help. Later on, Abu came up with a nutritional way to stew rice, which tasted and smelled good. He had a small bowl once in the morning and once in the evening, and his body gradually regained nourishment.

He later passed on the "healing recipe" to villagers, and that eventually became the Lamb Pilaf, one of the most common dishes in Xinjiang. 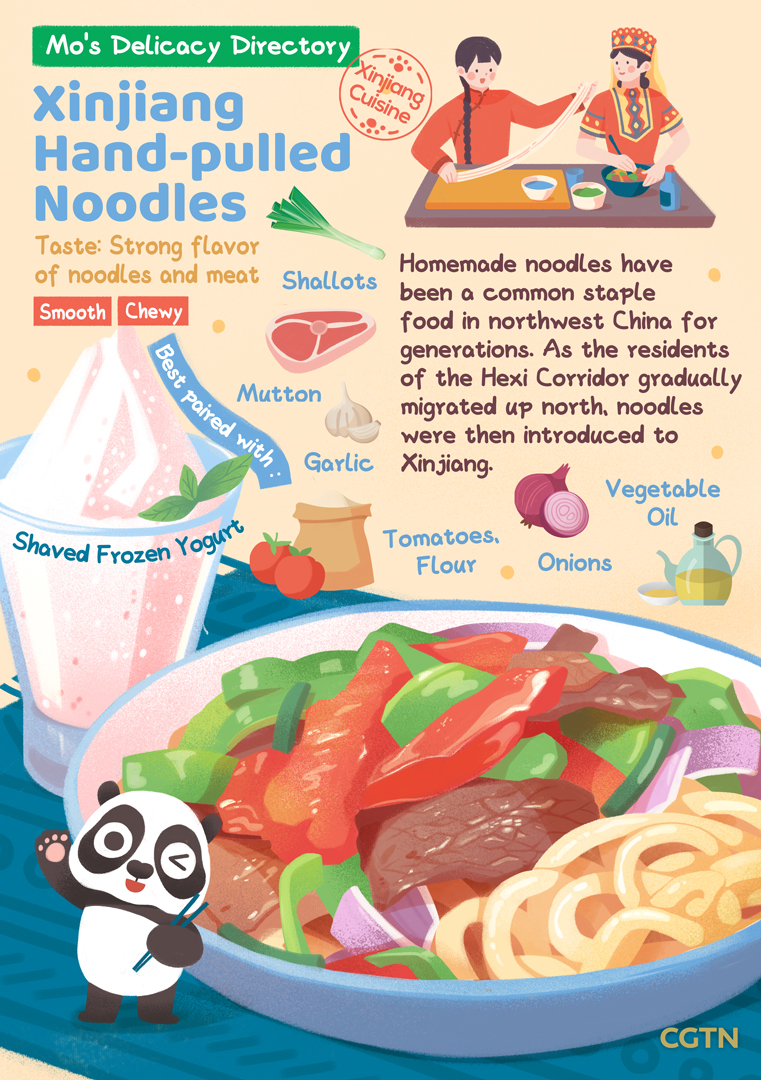 Homemade noodles have been a common staple food in northwest China for generations. As the residents of the Hexi Corridor gradually migrated up north, noodles were then introduced to Xinjiang. Local residents stir fry mutton with vegetables, and then mix it with boiled noodles. Nowadays, Xinjiang hand-pulled noodles, also known as Latiaozi, have become a part of local daily cuisine. 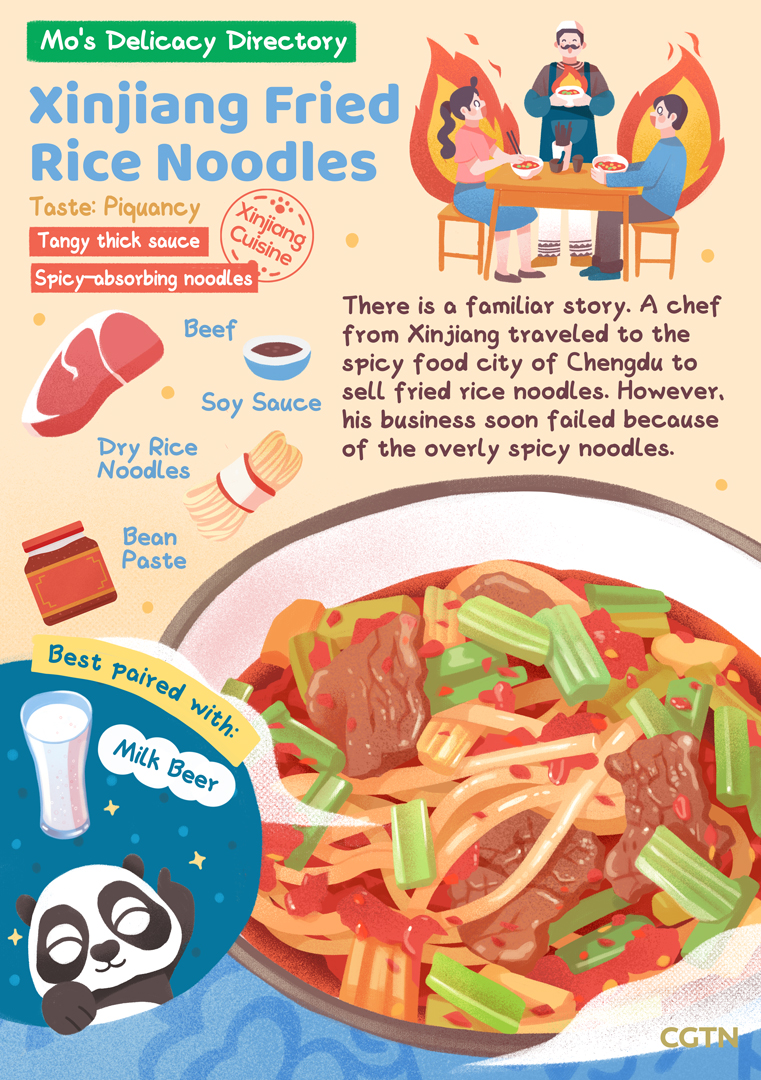 For the young generation of Xinjiang, the answer to "What should I eat today?" and "Let's grab something to eat" is always that popular dish, Xinjiang Fried Rice Noodles.

Xinjiang Fried Rice Noodles came from southern China, and then introduced to Xinjiang in 1982. After the recipe was modified by locals, half noodles and half spicy sauce became a unique feature of this dish. Therefore, anyone who has eaten it should not forget the fiery taste.

There is a familiar story. A chief from Xinjiang traveled to southwestern Chengdu, a city known for its spicy food, to sell fried rice noodles. However, his business soon fell apart because of the local overly spicy noodles. 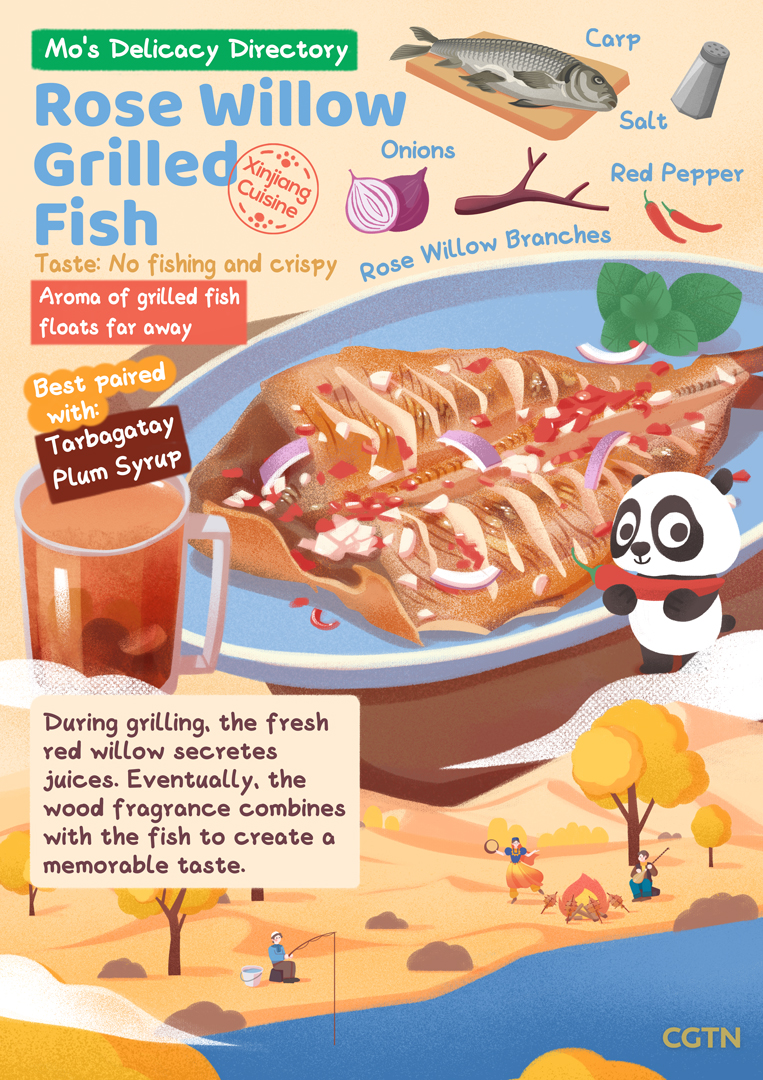 Tarim River is the mother river of southern Xinjiang. As the river flows through the desert, it not only waters millions of wild poplar forests, but also provides resources for people living by the sides of the river. For example, fish from the river is deeply loved by the local people.

Rose Willow Grilled Fish is the most primitive food along the river. Villagers wash the fish they catch, break off branches of rose willow by the riverside, and then use them to open up the fish. People erect the willow sticks on the ground and roast them slowly over a fire.

During grilling, the fresh red willow secretes juices. Eventually, the wood fragrance combines with the fish to create a memorable taste. 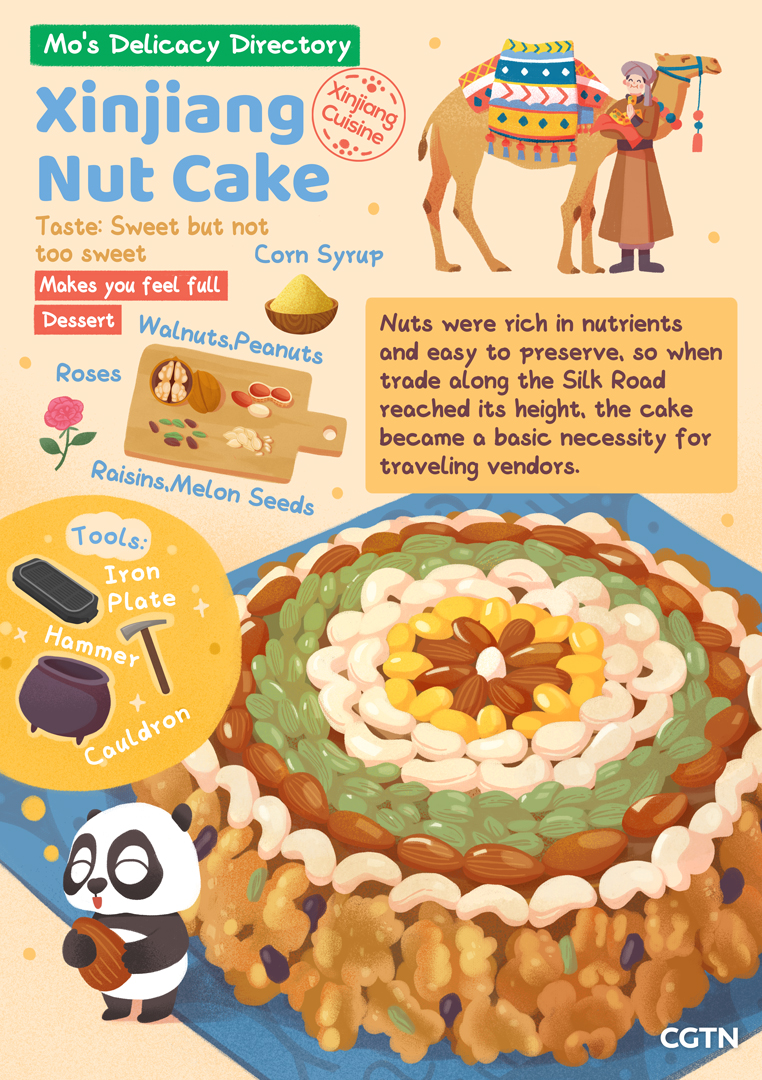 Xinjiang Nut Cake, also known as Qiegao, is a ubiquitous snack in the wide streets and narrow lanes of Xinjiang.

The Nut Cake has a long history. When trade along the Silk Road reached its height, Xinjiang was an important transportation center with food supplies. Nuts were rich in nutrients and easy to preserve. Therefore, Xinjiang Nut Cake became a basic necessity for travelling salesmen.