U.S. President Donald Trump on Monday suggested global warming will reverse itself and dismissed climate change as a cause of ferocious fires engulfing swaths of the U.S. West, during a briefing in California on the deadly blazes.

Trump, who flew into Sacramento on the third day of a re-election campaign swing, pushed back against state officials arguing that a heating climate underlies the ever-stronger blazes, which have killed at least 35 people since the start of summer.

"It will start getting cooler. You just watch," Trump said.

"I wish science agreed with you," responded Wade Crowfoot, the head of the California Natural Resources Agency.

The president and his administration have sought to pin the blame for the large wildfires on state officials, saying fuel-choked forests and scrub need to be thinned, more firebreaks need to be cut and flammable debris cleared from forest floors.

Trump said improved forest management was something that could be tackled quickly, whereas climate change would take more time and require international cooperation that he said was lacking.

"There has to be strong forest management," he said.

"With regard to the forests, when trees fall down after a short period of time, about 18 months, they become very dry. They become really like a match stick," he added. "They just explode."

Fires focus campaign on the climate

Minutes earlier, Democratic challenger Joe Biden assailed Trump as a "climate arsonist" whose re-election would be catastrophic for the environment.

"If you give a climate arsonist four more years in the White House, why would anyone be surprised if we have more of America ablaze?" Biden said, savaging Trump for failing to "take responsibility" for the ongoing wildfire crisis.

"We need a president who respects science, who understands that the damage from climate change is already here," Biden added. 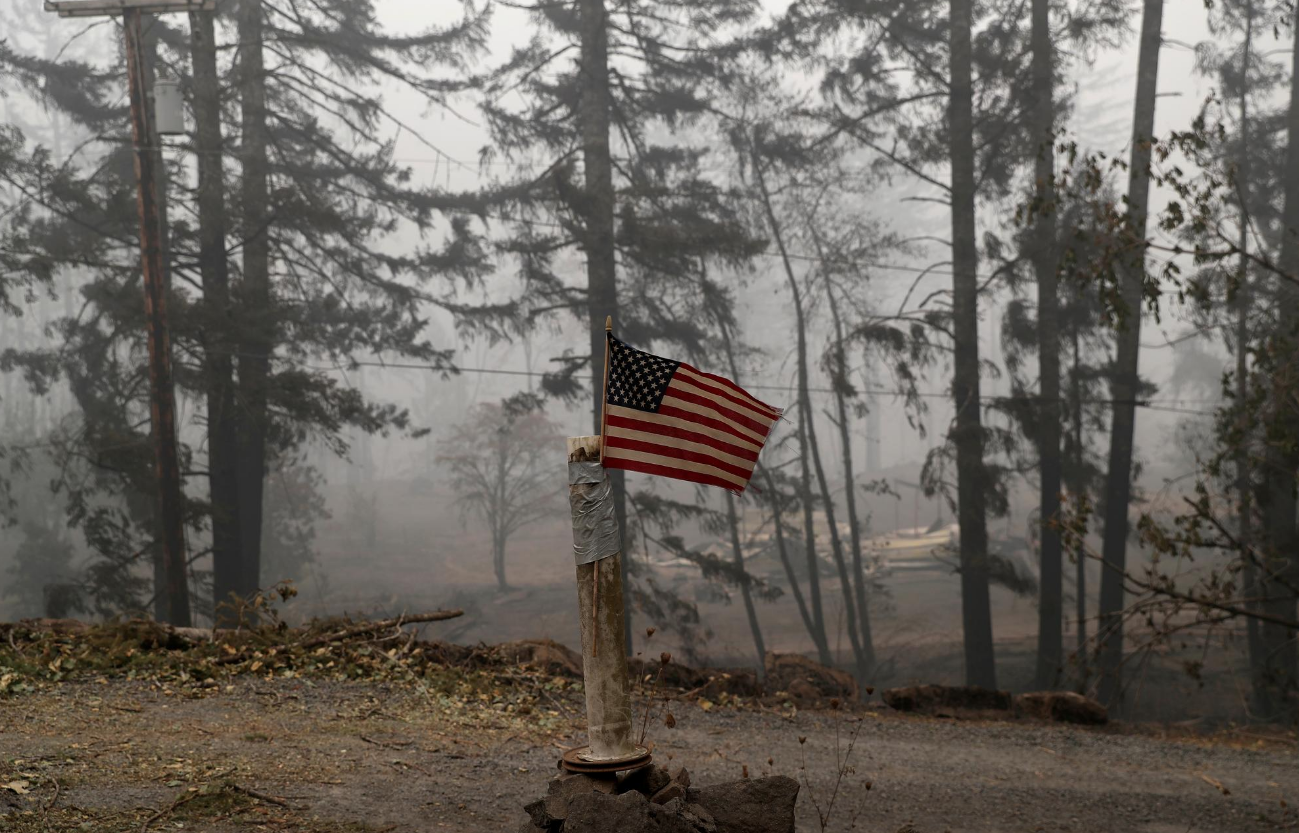 A U.S. flag is taped to the pole at the entrance of a house destroyed by fire in the aftermath of the Beachie Creek fire near Gates, Oregon, U.S., September 14, 2020. /Reuters

A U.S. flag is taped to the pole at the entrance of a house destroyed by fire in the aftermath of the Beachie Creek fire near Gates, Oregon, U.S., September 14, 2020. /Reuters

Dozens of conflagrations have raged more than 1.6 million hectares in Oregon, California and Washington state since August, laying waste to several small towns, destroying thousands of homes and killing at least 35 people.

The fires have also filled the region's air with harmful levels of smoke and soot, bathing skies in eerie tones of orange and sepia while adding to a public health crisis already posed by the novel coronavirus pandemic.

The president's visit to California was to last only a few hours before he returns to the campaign trail in Arizona.

California Governor Gavin Newsom, who has argued that the fires are driven mostly by global warming, acknowledged as he met with Trump that better forest management was needed.

But he said the overwhelming cause of the problem is far bigger.

"The hots are getting hotter, the dries are getting drier," he said. "We submit the science is in and observed evidence is self-evident: that climate change is real and that is exacerbating this."

Democratic vice-presidential candidate Kamala Harris is set to tour the damage Tuesday. She has tweeted that Trump has "denied evidence" the fires were "intensified by the climate crisis."

Twenty-seven of the at least 35 people killed by the blazes since the beginning of summer died last week.

Trump has made little comment about the massive blazes in recent weeks, drawing loud criticism for not acknowledging the crisis.