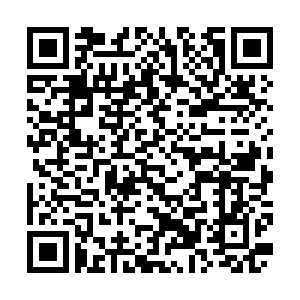 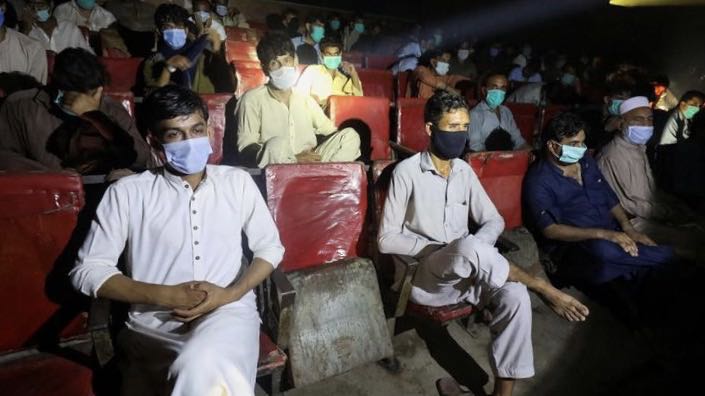 People wear protective masks while watching a movie at a cinema in Peshawar, Pakistan, August 10, 2020. /Reuters

People wear protective masks while watching a movie at a cinema in Peshawar, Pakistan, August 10, 2020. /Reuters

Picture a developing country facing a mix of social, political and economic troubles. Imagine this country is also faced by intermittent but incessant episodes of social unrest fueled by issues ranging from sectarian violence to gender inequality. Knee-deep in debt, this country also has a weak healthcare system crippled by everything from low budgetary allocation to corruption. What happens when a pandemic hits such a country?

The answer to this hypothetical question might not be very pleasing. However, how things have shaped for this country in the real world is nothing short of a miracle. Under the spotlight today is Pakistan – a country that seems to be emerging victorious in its fight against COVID-19 – a pandemic that has brought even the likes of the United States to its knees.

The virus started picking up pace in Pakistan in May, with the country reporting between 989 (May 2) and 3,039 (May 30) cases on a daily basis. The peak hit on June 13 when as many as 6,825 cases were reported in a single day. Since the middle of June, the number of new cases has declined steadily, with the figure falling below 1,000 in August and below 600 in September. 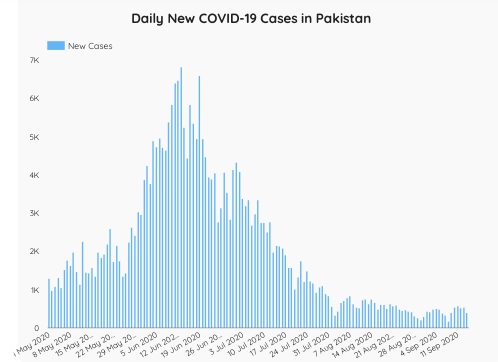 A screenshot of a graph showing number of daily COVID-19 cases from May 1 to September 14. /covid.gov.pk

A screenshot of a graph showing number of daily COVID-19 cases from May 1 to September 14. /covid.gov.pk

The increase in testing capacity, decrease in number of daily cases and deaths, and mobilization of the state machinery to keep safe a population that does not respond well to government directives were all achieved amid a critical period on the Islamic lunar calendar. The Muslim holy month of fasting, Ramadan, and the ensuing festival, Eid al Fitr, fell in May; one of the largest Muslim festivals involving mass animal slaughter, Eid al Adha, chose the end of July; and the Islamic month of mourning, Muharram, marking the martyrdom anniversary of one of the holiest figures in Islam, began at the end of August. 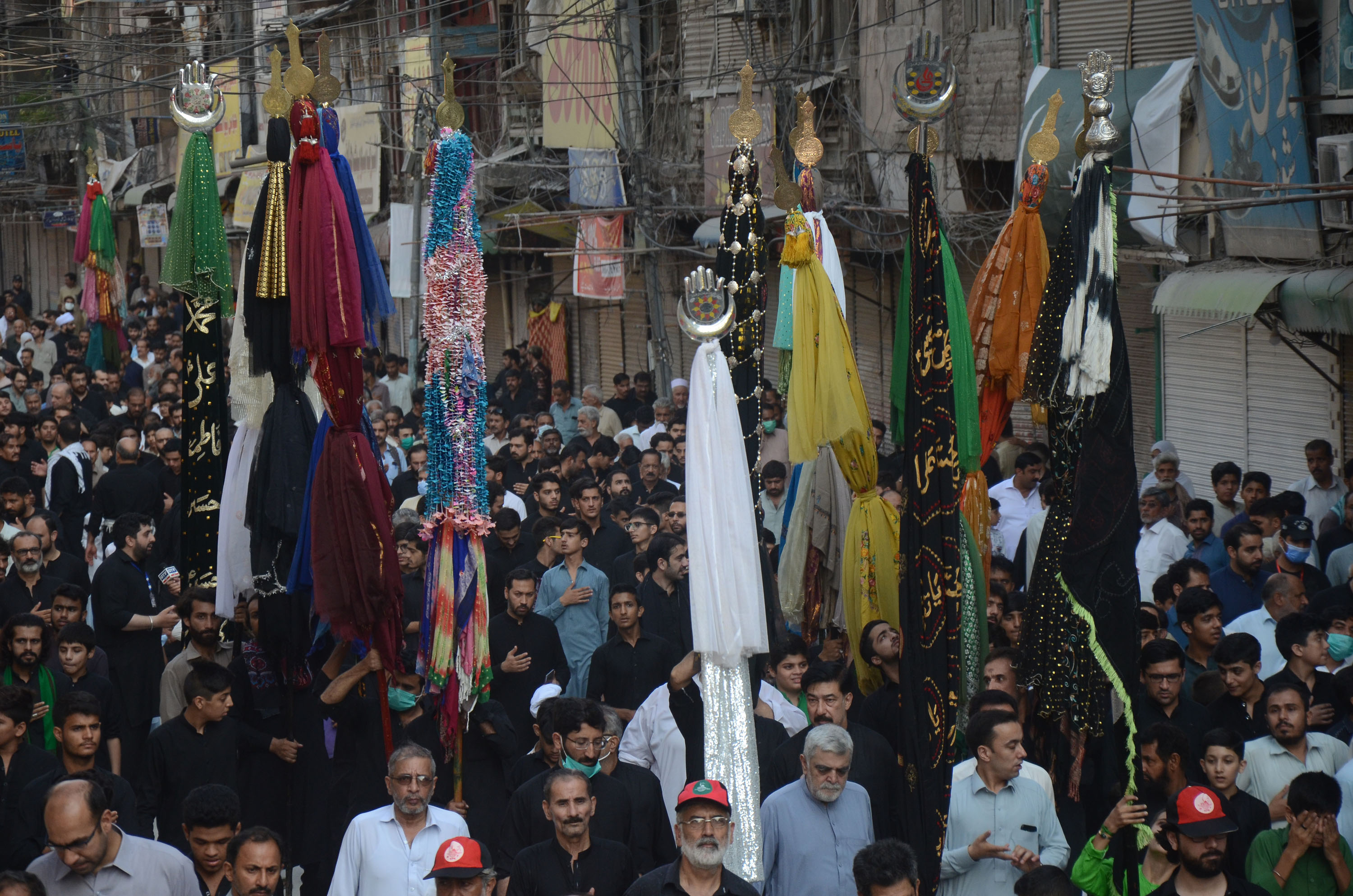 Shiite Muslims attend a Muharram procession in remembrance of the martyrdom of Hussein, the grandson of Prophet Muhammad, Peshawar, Pakistan, August 27, 2020. /Getty Images

Shiite Muslims attend a Muharram procession in remembrance of the martyrdom of Hussein, the grandson of Prophet Muhammad, Peshawar, Pakistan, August 27, 2020. /Getty Images

All these religious occasions, which in the context of Pakistan are national occasions, were observed in the past four months with a fervor that was hardly unprecedented. Millions were seen going about their yearly business in thousands of congregations, processions and mass gatherings as they do every year. The government tried to hold them back by closing places of worship and advising them to offer prayers at home, but later gave in to "democracy," opened all religious sites for visitors and started doubling up on raising awareness and enforcing measures like social distancing and mask-wearing. 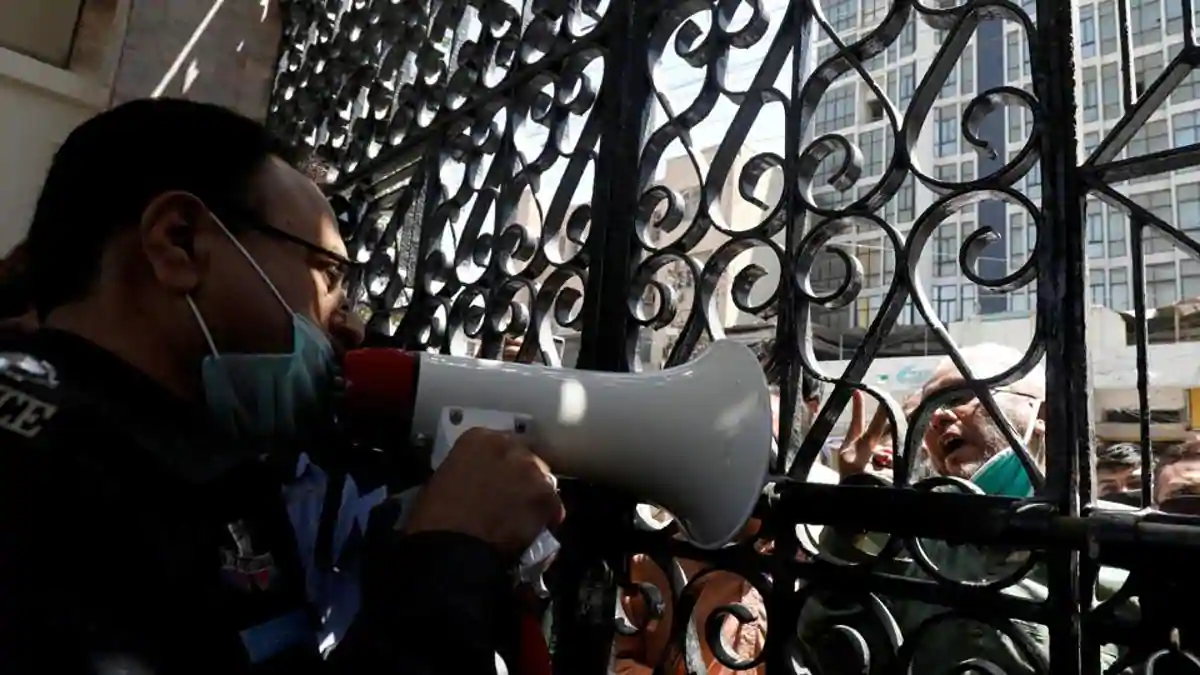 A police officer uses a megaphone, requesting people to go and pray at home, at the locked entrance gate of a mosque during a lockdown in Karachi, Pakistan, March 27, 2020. /Reuters

A police officer uses a megaphone, requesting people to go and pray at home, at the locked entrance gate of a mosque during a lockdown in Karachi, Pakistan, March 27, 2020. /Reuters

So what's the catch? How did Pakistan flatten the curve?

"Pakistan deployed their infrastructure built up over many years for polio to combat COVID-19. Community health workers who have been trained to go door to door vaccinating children for polio have been utilized for surveillance, contact tracing and care," said World Health Organization (WHO) Director-General Dr Tedros Adhanom Ghebreyesus during a press conference on September 7. He praised Pakistan, among seven countries, saying their preparation and response offer lessons for the rest of the world.

So, one thing is clear: despite being a developing country, what Pakistan has to its advantage is it decades-long experience in tackling polio. 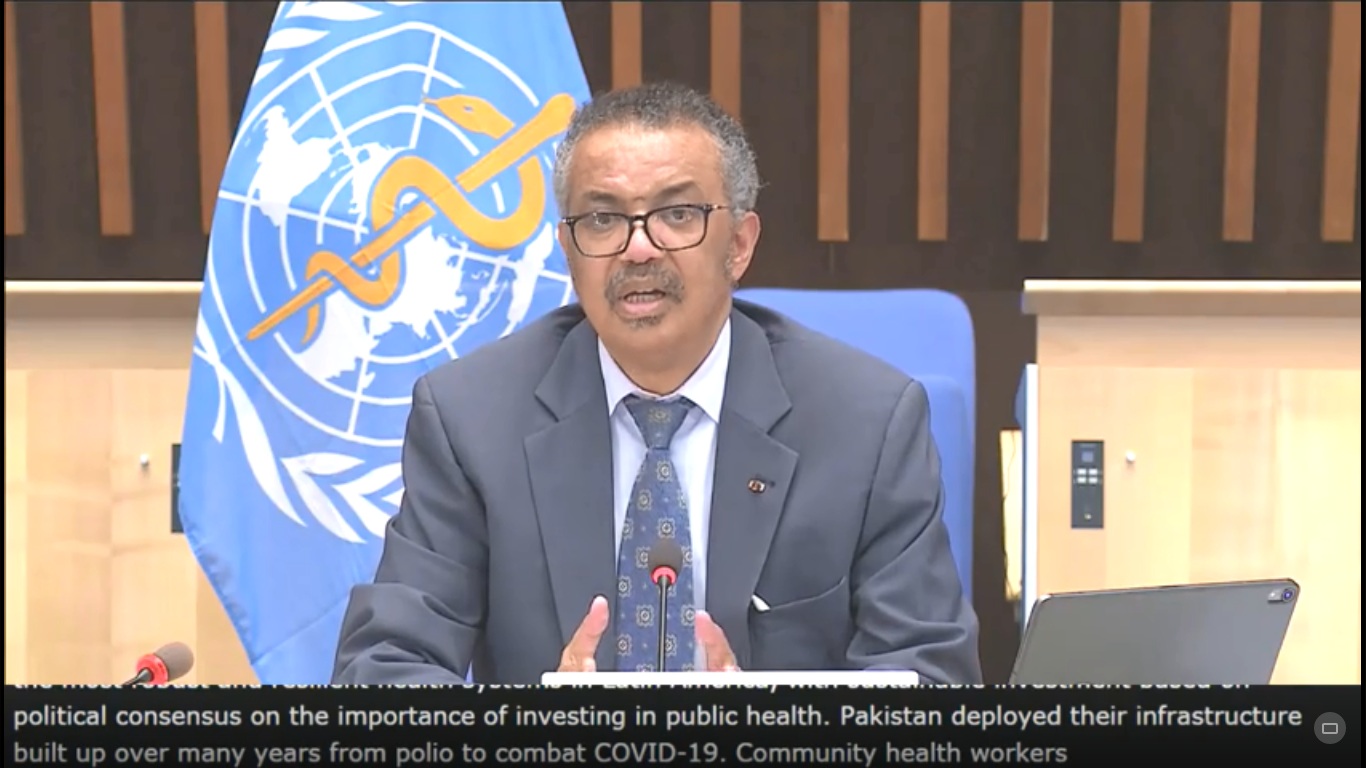 A screenshot of WHO Director-General Dr Tedros Adhanom Ghebreyesus from a press conference on COVID-19, September 7, 2020.

A screenshot of WHO Director-General Dr Tedros Adhanom Ghebreyesus from a press conference on COVID-19, September 7, 2020.

Moreover, while other countries scratched their heads over the question of to open or not open the economy, Pakistan made a bold and rather interesting move to open the economy and enforce smart lockdowns. As the name suggests, it's been quite smart really: lock down COVID-19 hotspots and let the rest follow SOPs (standard operating procedures).

In the nitty-gritty, it is pretty much what all sane countries have been doing: construction of temporary medical facilities, social distancing, mask-wearing and awareness campaigns, among others. However, what has been different is the selective approach toward lockdowns, from industry to industry and area to area. Had the entire country remained under a blanket lockdown, its economy would have collapsed, paving the way for further political and social troubles, which ultimately would not have bode well in the war against the disease.

This was probably the only way the country could afford to tackle the situation, and it did.

A number of lessons were learnt in the process, and China has been an inspiration. Two prominent areas in point are the transformation of public venues into, and construction of, temporary quarantine facilities as well as phase-wise reopening of schools. And this is apart from the assistance China offered to Pakistan in terms of medical supplies.

Akin to the reopening of schools in China, Pakistan has opted for a staggered resumption of classes, with senior schools reopening on September 15, middle schools getting back to business next week and primary schools the week after. The schools had been closed since March. 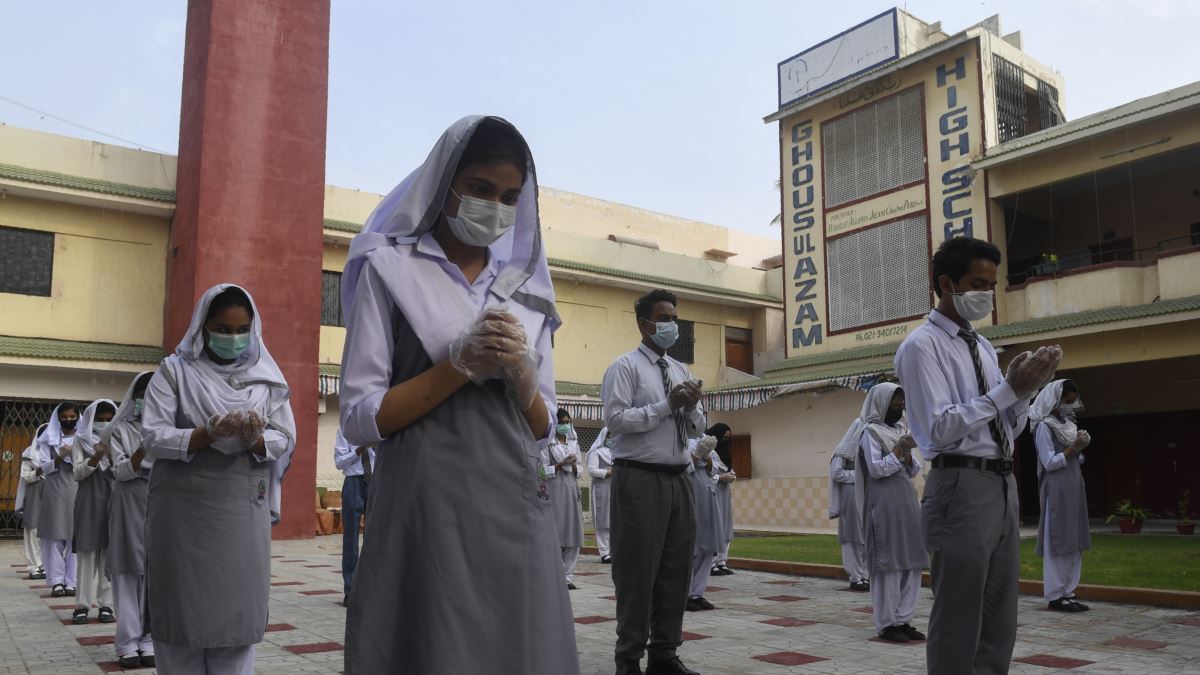 Students wearing face masks and gloves take part in an assembly at a reopened school in Karachi, Pakistan, September 15, 2020. /AFP

Students wearing face masks and gloves take part in an assembly at a reopened school in Karachi, Pakistan, September 15, 2020. /AFP

Pakistan has not shied away learning the lessons from success stories like China's, and credit goes to its leadership who did not brandish ego at a time when humility was required. The measures have worked for Pakistan, just as they did for China, and they will for any other country that follows – with minor tweaks per the country's actualities and a pinch of salt of course.

Pakistan has certainly won a couple of battles, but the war against this pandemic is far from over. Keeping the economy afloat while steering the country through a critical time is no mean feat, but winter is coming, and with it the virus season. At the same time, all eyes are on COVID-19 vaccine candidates undergoing clinical trials. So what can Pakistan and other countries, especially the developing ones, do to ensure survival and turn their tales of misfortune into a happily-ever-after? Rudyard Kipling might have an answer: