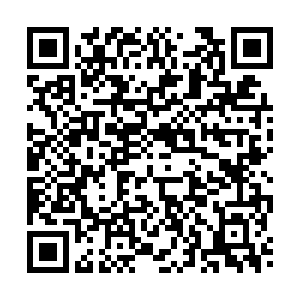 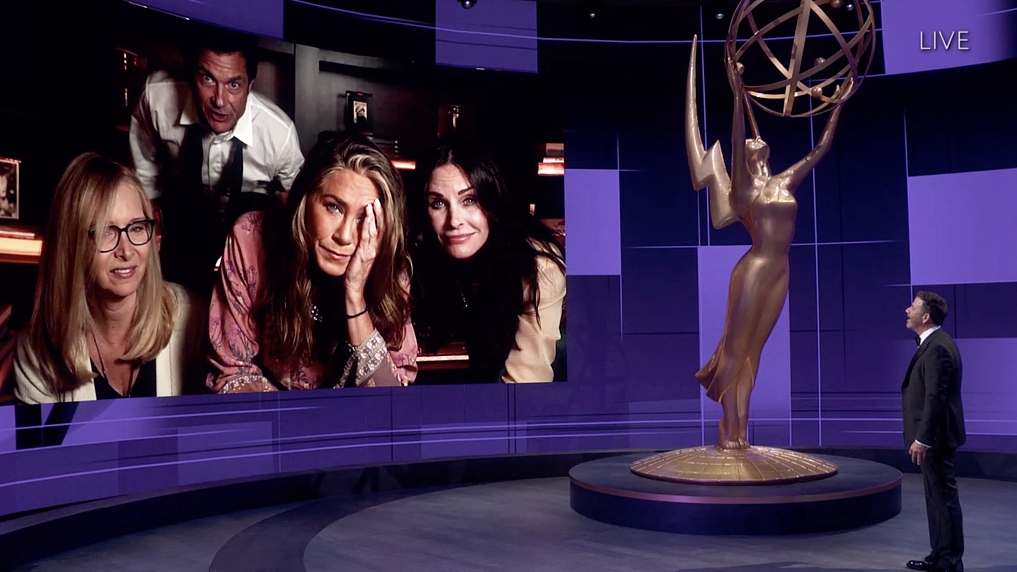 Despite fewer dazzling gowns and tuxedoes on the red carpet, this year's Emmy Awards took place on Sunday at an empty Staples Center in Los Angeles with no less glamour.

Most Hollywood A-listers made their appearance in their pajamas, or in everyday attire from their living rooms, studies, guest rooms or elsewhere via the internet.

Faced with the COVID-19 pandemic, the event's organizers announced earlier that it would go virtual this year, with Jimmy Kimmel as the host. All the nominees, presenters and performers scattered around the world participated from the comfort of homes. What ensued was an Emmy Awards show to remember. 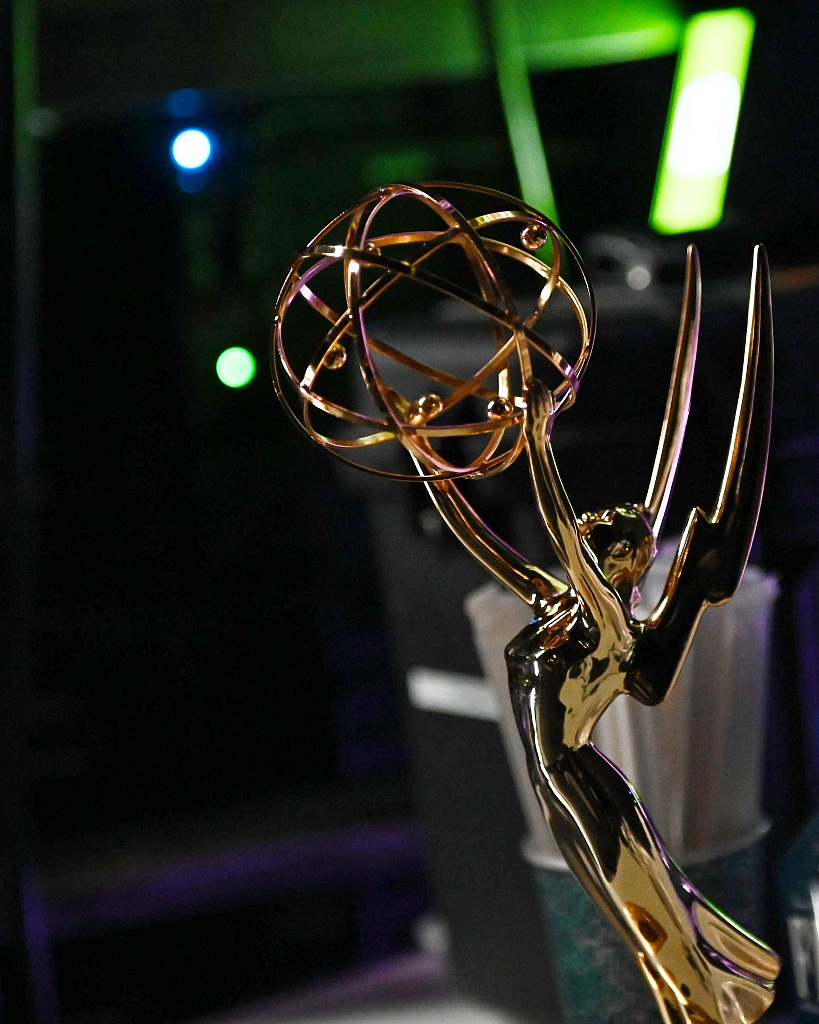 A trophy of the 72nd Emmy Awards. /CFP

A trophy of the 72nd Emmy Awards. /CFP

HBO network once again captured the honor of being the biggest winner at the Emmys. The streaming service snapped up 30 wins, including best drama for "Succession," which also picked up several other awards, such as best lead actor, best writing and best directing.

Dystopian drama "Watchmen" led the run and is the main contributor for HBO. It took home 11 Emmy awards, including the best limited series and best actress in a limited series for Regina King.

Twenty-four-year-old star Zendaya claimed the best actress for her role in "Euphoria." She also makes history as the youngest winner of the award in the history of the event. 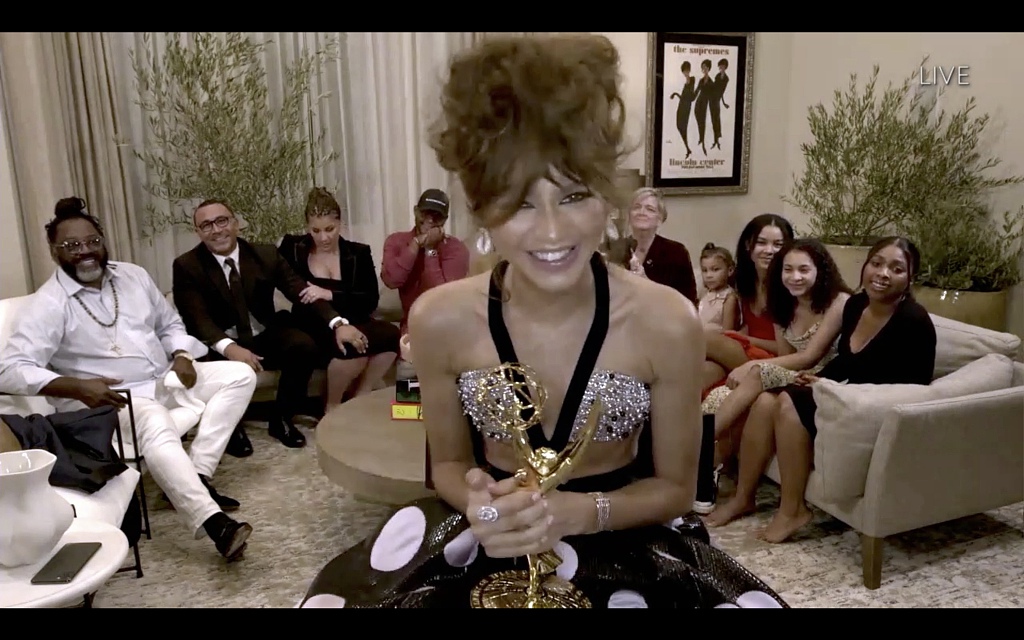 Netflix had the most nominations this year with 160, 53 more than HBO's 107. The service followed HBO with 21 wins, but only two at the Primetime Emmys, including best directing for a limited series category for Maria Schrader's "Unorthodox" and the best supporting actress for Julia Garner in "Ozark."

Apple TV Plus secured its first Emmy for Billy Crudup's supporting role in "The Morning Show." Another new player in the Emmys, Disney Plus, pocketed eight awards, including seven for "The Mandalorian." 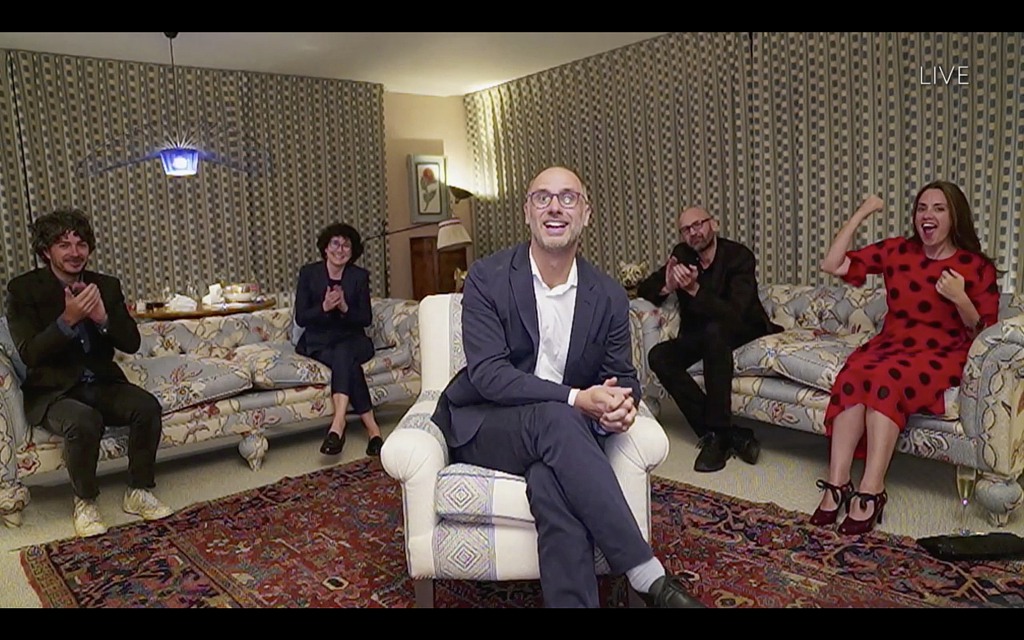 The 72nd Emmy Awards ceremony in the cloud. /CFP

The 72nd Emmy Awards ceremony in the cloud. /CFP

The awards ceremony opened with host Jimmy Kimmel's monologue, and only a few stars, including Jennifer Aniston, showed up in the center with Kimmel. Disinfection spray was in place for the novel coronavirus containment measures at the awards show. Kimmel and Aniston even set fire to a winner's envelop after spraying it with Lysol disinfectant spray, joking that they were "sanitizing" it.

Some of the guests at home are dressed up in formal attire and had a gathering of family and friends with them. Others were seen casually lounging at home. One of them was actress Regina King, who received her historic fourth Emmy award.  King spoke from an armchair in her home, wearing a pink suit and a black T-shirt bearing the face of Breonna Taylor, who was shot and killed by police in Kentucky in March. Her fourth Emmy ties her with actress Alfre Woodard for most acting Emmys won by a Black performer. 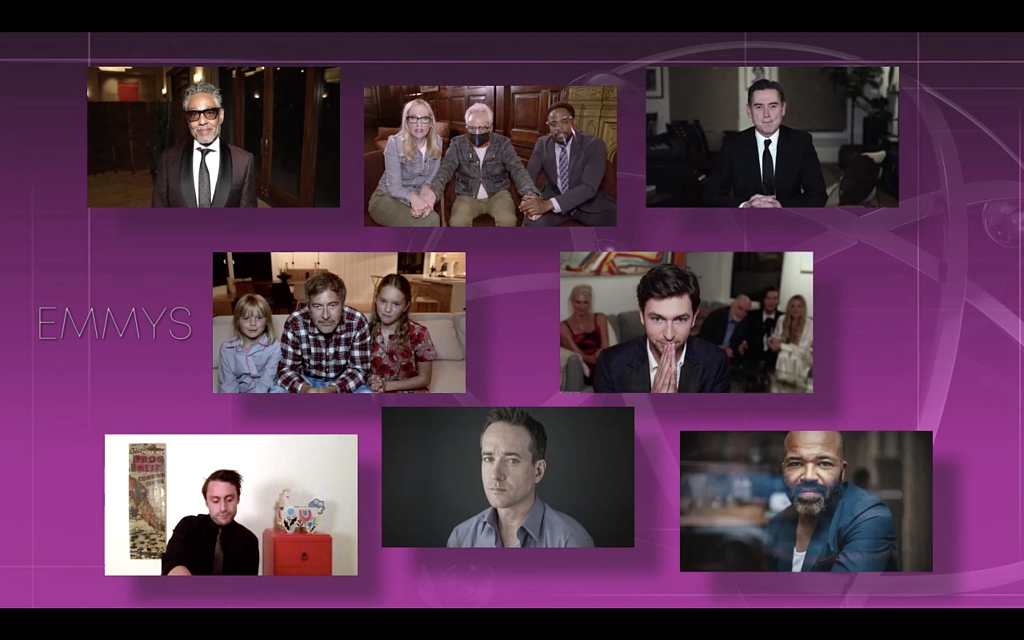 Some of the trophies were delivered to the winners by people in protective gear, which was also live broadcast on television. Actor Ramy Youssef posted a video on Twitter showing how a delivery person waved goodbye and ran away while he ended up not winning.

Youssef was nominated for best directing in a comedy series and best leading actor in a comedy series for Hulu's "Ramy." However, he ended up losing both. The video went viral on Twitter as well as Chinese social media Sina Weibo. Most viewers were amused by the innovativeness of this year's ceremony.

While opening the show, Jimmy Kimmel said that it seems "frivolous and unnecessary to do this during a global pandemic" because it cannot stop the COVID-19 pandemic. However, "it's fun. And right now we need fun," he said.

Apparently, it did bring fun for the guests as well as the audience.