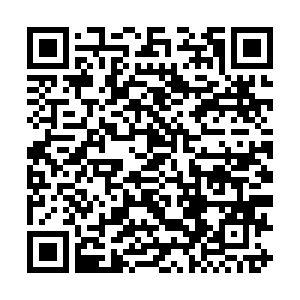 Sidelines is a Column from CGTN's Social Media Desk

Dancing grannies have made a comeback to Beijing's squares.

The "square dancers," mostly elderly women in groups of 10 to 20, are known to take over public spaces in China, moving their bodies rhythmically and in unison to music blasting from loudspeakers. After taking a break during COVID-19, they're back to delighting, and in some cases disturbing, the public, this time around with masks covering their faces.

If their exercise strictly qualifies as dance remains debatable, but it has livened up Beijing streets after sunset despite the epidemic continuing to prey on people's mind.

Group sports have returned to Beijing with a few post-epidemic modifications after the most recent flare-up that took place at a wholesale market in June. Body temperature checks before entering fenced facilities remain mandatory. Checkpoints are still in operation asking people to scan a QR code to access a health code app and show proof that they have not crossed path with infected people.

When it comes to necessary daily items, face masks are only second to smartphones in China. Although not the overwhelming majority, many still choose to wear masks during workout. The precautions may sound troublesome, but at least people can enjoy team sports without sitting through 14 days of quarantine or having their throats swabbed for sample-taking for testing.

Professional sportspeople may not be spared these troubles anytime soon, especially in their respective "bubbles" – Tightly-controlled zones established for players and staff taking part in a championship where frequent testing and movement restrictions aim to keep the new coronavirus at bay.

The system has worked well so far wherever it's been introduced. The Chinese Basketball Association (CBA) managed to conclude what's left of its 2019-2020 tournament within a bubble in east China's Qingdao in August and is now planning to start the new season with a few enhancements.

The bubble's success is more spectacular in the U.S than in China, largely because of the former's failure to contain the pandemic on its soil. The National Basketball Association (NBA) has spent 150 million U.S. dollars to set up its bubble at Disney World in Orlando, Florida. No positive test results have been reported inside the bubble since July 30, in stark contrast to what is happening outside the walls of the fairyland.

Managing a bubble for an international tournament could be trickier with participants flocking from all over the world, but the protocol is roughly the same: quarantine and test everyone before and as the games happen.

The U.S. Open proved this possible with nearly a thousand players, coaches, physiotherapists and officials descending on New York, one of the hardest-hit megacities during the pandemic. Several parts of hotels housing the personnel were closed off with shuttle buses carrying them between their temporary residences and the Billie Jean King National Tennis Center. But health concerns lingered and dulled the game. In fact, both the women's and men's defending champions decided to skip the event.

With an Olympic tournament, it's a completely different story. Imagine how many areas Tokyo needs to seal off during the 2021 Olympics. How long it'll take Japan to contain domestic infections is another complicating factor. The Tokyo Organising Committee seems to have settled on pre-game testing, requiring athletes to provide negative results within 72 hours of leaving for Japan, in addition to results conducted upon entering the country and other Olympic facilities. The timing and frequency have yet to be decided.

For Tokyo, some of Beijing's lessons may be helpful. The square dancers can feel safe enough exercising in groups again because their city is "bubble wrapped" against the coronavirus. Quarantines and tests remain key to achieving that, but Beijing has learned that measures have to be scaled up and sped up right from the beginning: rapid and stringent lockdowns where new cases are detected, mass testings with fast results and relentless contact tracing. In about two weeks following the June flare-up, Beijing had tested nearly three million people. Underlying these operations is a quick concentration of resources to stamp out outbreaks before they spin out of control.

Without an effective treatment or vaccine against COVID-19, sporting events will have to make do with bubbles for a while longer. And a bubble is only as impenetrable as its weakest link. The larger the zone, the likelier the holes.

In case of a positive test at the door or, worse, from inside the Olympic bubble, the organizers as well as government officials must act swiftly, before the virus leads them a merry old dance.