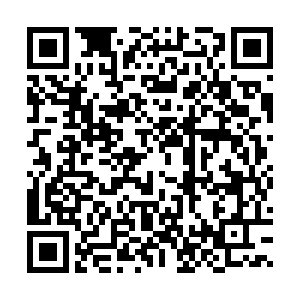 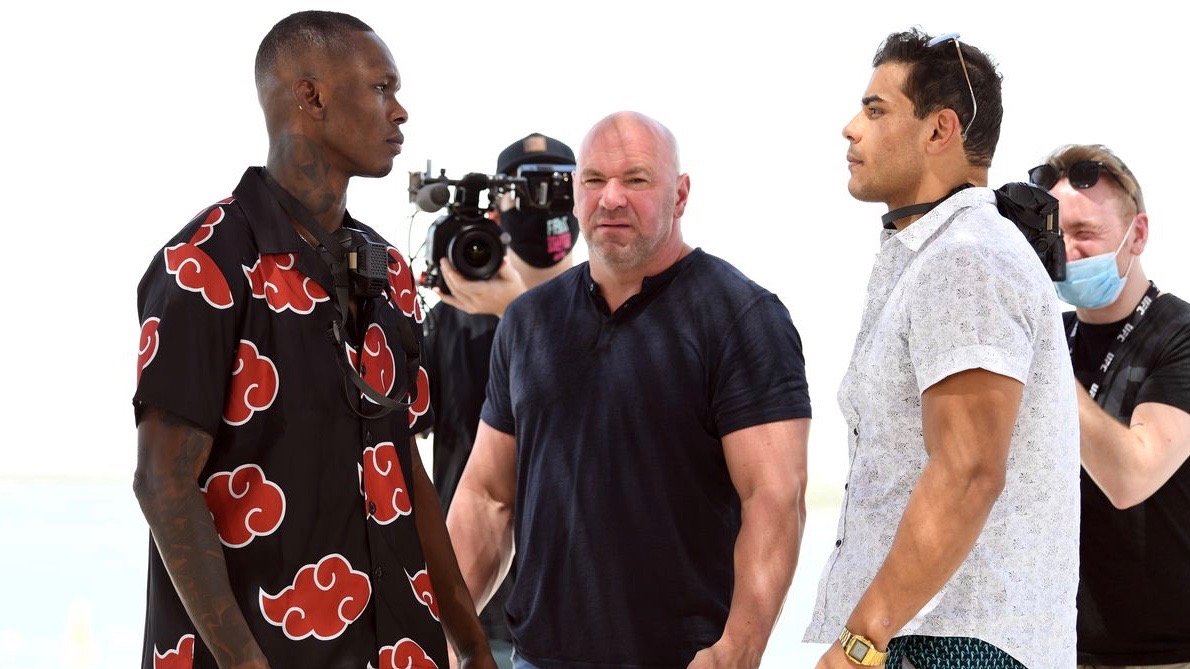 In the rush to get a UFC event out every single week, it seems like company president Dana White mixed things up. Last week, at the UFC's APEX facility in Las Vegas, Nevada, a small TV studio with a small cage, the company hosted a fight card that featured stars like Colby Covington and "Cowboy" Cerrone, former men's welterweight champion Tyron Woodley, hot prospects Khamzat Chimaev and Johnny Walker.

On Sunday, at the Flash Forum of Fight Island, a specially constructed arena just for the UFC in Abu Dhabi, there are likely to be a lot of good fights, but the main card bouts of Dominick Reyes vs. Jan Blachowicz for the vacant light heavyweight championship and Kai Kara-France vs. Brandon Royval are low-key matchups designed to establish positions in the rankings rather than to eliminate and promote top contenders. And there isn't much to say about Ketlen Vieira vs. Sijara Eubanks nor Hakeem Dawodu vs. Zubaira Tukhugov.

Thankfully, it's headlined by a blockbuster of a main event. Undefeated UFC men's middleweight champion Israel "Stylebender" Adesanya defends against undefeated contender Paulo "The Eraser" Costa. Adesanya has been on a run of 19 fights while Costa is on 13 and now one of them must finally lose the ensuing "-0" from their records. 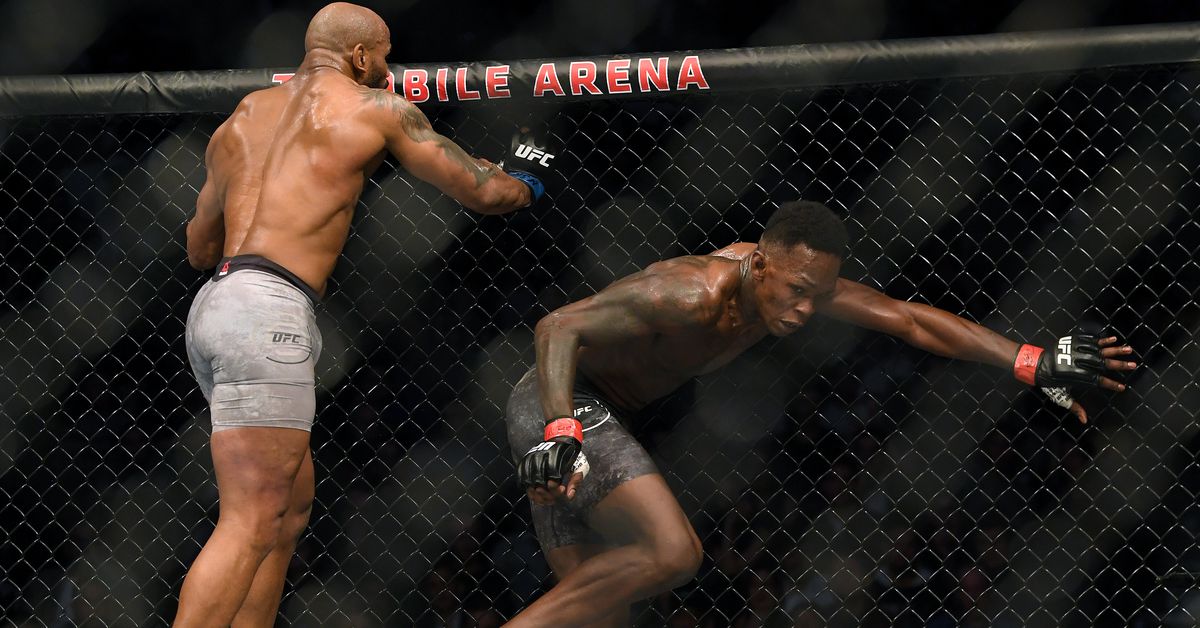 All sports operate on a "what have you done for me lately?" basis and nobody in UFC needs to make an impact right now as much as Adesanya. Since arriving at the UFC 211 on February 11, 2018, his rise has been meteoric. He fought four times that year and at UFC 230 on November 3 2018, he destroyed Derek Brunson in a round, establishing himself as legitimate in the process, and then went on to get a victory over his idol Anderson Silva before beating Kelvin Gastelum and Robert Whittaker to win the interim and unanimous UFC men's middleweight championships respectively.

So why does he need to prove himself? His first title defense, which came against "The Soldier of God" Yoel Romero at UFC 248 on March 8 this year, is perhaps the defining example of somebody winning the fight and losing the story. For all his showboating and unique anime-inspired offence, at his core, Adesanya is a counter fighter, so when Romero began the fight standing stock still, like a character in Tekken when you don't press any buttons, Adesanya looked flummoxed.

Then, when Romero did as he always does and bursts to life, Adesanya looked scared. He got hit with one hard punch in Round 1 and spent the remainder fighting safely. One particularly unfortunate photo of him ducking and evading a Romero punch with a terrified look on his face has circulated on the internet as a meme. Adesanya won by decision and Romero – then 42 compared to 30-year-old Adesanya – barely looked like he'd worked up a sweat. 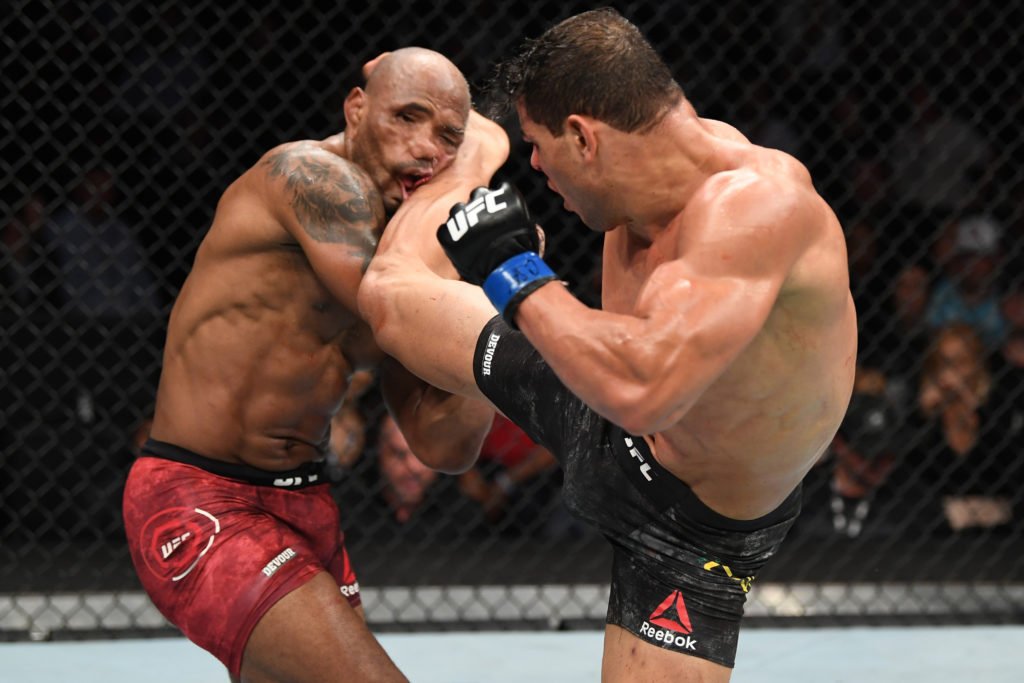 Paulo Costa (R) hits Yoel Romero with a hard headkick during their middleweight bout at UFC 241 at the Honda Centre in Anaheim, California, August 18, 2019. /Zuffa

Paulo Costa (R) hits Yoel Romero with a hard headkick during their middleweight bout at UFC 241 at the Honda Centre in Anaheim, California, August 18, 2019. /Zuffa

It would be wrong to say it made Adesanya into a laughing stock, but considering how brash he is before, during and after fights, it looked as if he'd been exposed on the grandest stage.

His opponent at UFC 253, Paulo Costa, thought so too. In an exchange of trash talk on Twitter, Costa said it showed Adesanya's "best skill is running away – avoid the fight". This is more than just banter from The Eraser. In his first 12 fights, only one ended with a submission; he knocked everybody else out. He tends to do it quickly too as his first nine fights ended in the first round.

The only time he's been a decision was against the aforementioned Romero. Unlike the title match with Adesanya, Costa's fight with The Solider of God was a war – Romero landed more significant strikes in the final round (53) and lost than Adesanya threw in their whole fight (48) when he won.

Alas, for Costa, it's true that styles make fights, and based on that metric alone, it looks as if he's being fed to the proverbial lions. His thunderous, straight ahead style of muay thai will put pressure on Adesanya, and having seen how he was against Romero, that might force him to make mistakes – it also seems perfectly designed for Adesanya to run rings around. Stylebender's home gym, City Kickboxing, have made a name for themselves with their high-level striking and that's come to the forefront when he's been the reactive fighter against Brunson, Whittaker and, surely, Costa.