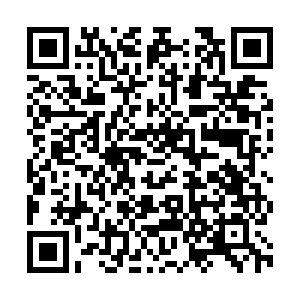 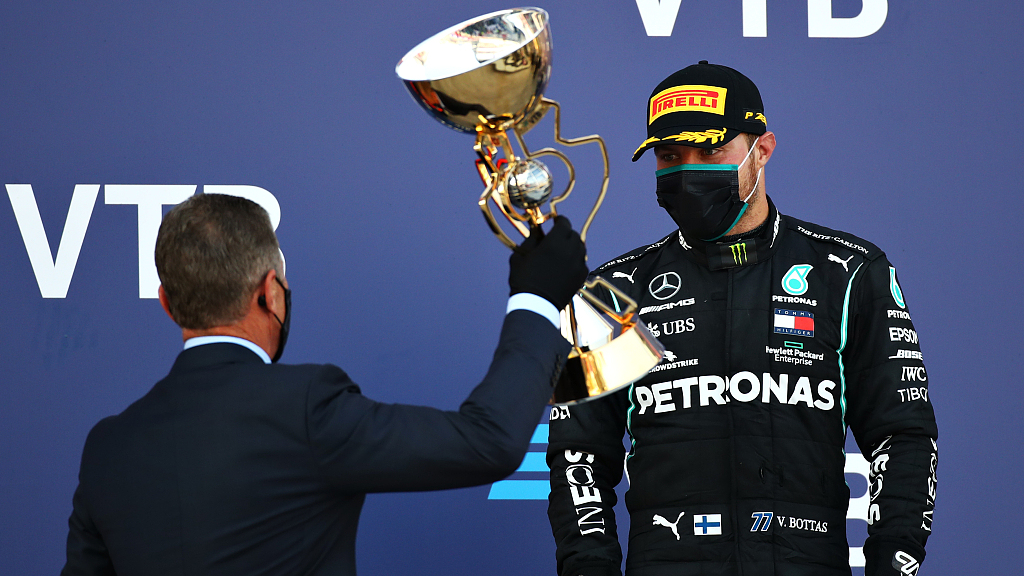 Valtteri Bottas of Finland (R) is presented with his winners trophy at the F1 Grand Prix of Russia in Sochi, southern Russia, September 27, 2020. /CFP

Valtteri Bottas of Finland (R) is presented with his winners trophy at the F1 Grand Prix of Russia in Sochi, southern Russia, September 27, 2020. /CFP

Valtteri Bottas took full advantage of a troubled day for his Mercedes teammate Lewis Hamilton to claim the ninth win of his career with a measured drive to victory in Sunday's incident-packed Russian Grand Prix in Sochi, southern Russia.

The Finn swooped to take second place at the start and inherited the lead when the runaway series leader and six-time champion took an extended pit-stop to serve two five-second penalties for irregular pre-race practice starts.

A disgruntled Hamilton, aiming to win and equal Michael Schumacher's record of 91 Grand Prix triumphs, re-joined in 11th place, but fought back to finish third behind Bottas and Red Bull's Max Verstappen.

His second win in Russia and second this season reinvigorated Bottas' challenge for the drivers' title and reduced Hamilton's lead to 44 points.

Sergio Perez came home fourth for Racing Point ahead of Renault's Daniel Ricciardo, who had to take a five-second penalty for an infringement, and Charles Leclerc, who was sixth for Ferrari.

Esteban Ocon was seventh for Renault ahead of local hero Daniil Kvyat and his Alpha Tauri team-mate Pierre Gasly and Alex Albon, who was also given a five-second penalty, in the second Red Bull.

Hamilton did not want to talk about his penalty

"It doesn't matter. It's done now. I'll take the points and move on, but congratulations to Valtteri.

Bottas said: "It's very nice to get a win. It's been a while! I need to try and keep the momentum. I've managed to squeeze a few points over Lewis, but there's still quite a few races to go so you never know. I'll keep pushing. I won't give up."

Verstappen said: "We split the Mercedes again so that is good – and we can be happy with that."

All three drivers wore their racing overalls on the podium after the race, obeying the latest revised rules from the sport's ruling body not to wear any items carrying "political messages."