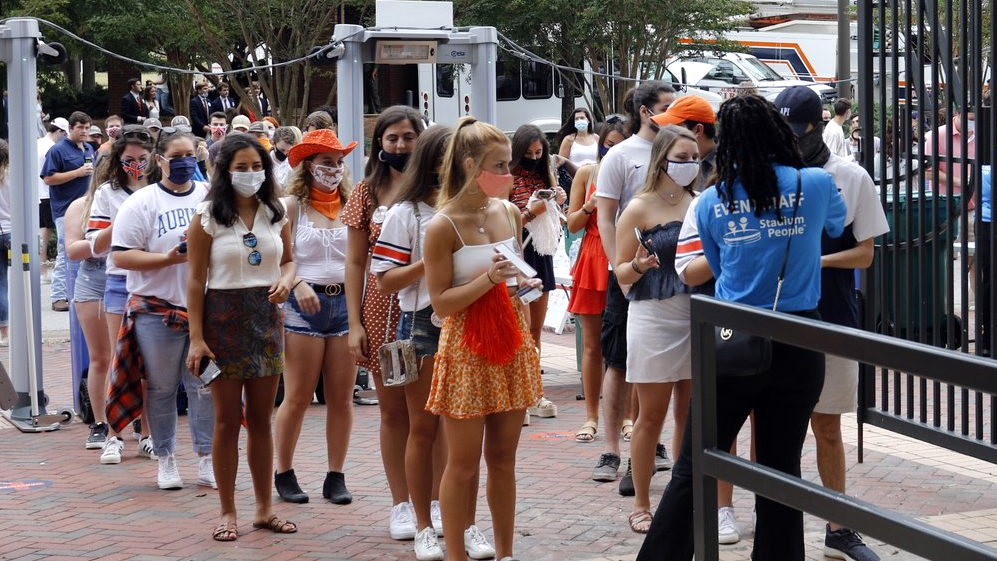 Colleges across the U.S. are struggling to salvage the fall semester amid skyrocketing coronavirus cases, entire dorm complexes and frat houses under quarantine, and flaring tensions with local community leaders over the spread of the disease.

Many major universities are determined to forge ahead despite warning signs, as evidenced by the expanding slate of college football games occurring Saturday. The football-obsessed SEC begins its season with fans in stadiums. Several teams in other leagues have had to postpone games because of outbreaks among players and staff.

Institutions across the nation saw spikes of thousands of cases days after opening their doors in the last month, driven by students socializing with little or no social distancing. School and community leaders have tried to rein in the virus by closing bars, suspending students, adding mask requirements, and toggling between in-person and online instruction as case numbers rise and fall.

Tension over the outbreaks is starting to boil over in college towns.

Faculty members from at least two universities have held no-confidence votes in recent weeks against their top leaders, in part over reopening decisions. Government leaders want the University of Wisconsin-Madison to send its students home. Republican Florida Gov. Ron DeSantis, alarmed by what he sees as draconian rules on college campuses, said he is drawing up a "bill of rights" for college students.

In Rhode Island, Gov. Gina Raimondo, a Democrat, this week blamed outbreaks at two colleges for a surge of virus cases that boosted the state's infection rate high enough to put it on the list of places whose residents are required to quarantine when traveling to New York, New Jersey and Connecticut.

The University of Wisconsin-Madison had seen more than 2,800 confirmed cases in students as of Friday. The school shut down in-person instruction for two weeks, locked down two of its largest dorms, and imposed quarantines on more than a dozen sorority and fraternity houses. The school lifted the dorm lockdown just this week.

Dane County Executive Joe Parisi has demanded the university send all its students home for the rest of the academic year.

"(The virus) was under control until the university came back," Parisi said.

Chancellor Rebecca Blank has fired back, saying tens of thousands of students with off-campus housing would still come to the city. She accused Parisi of failing to enforce capacity restrictions in bars and off-campus parties. 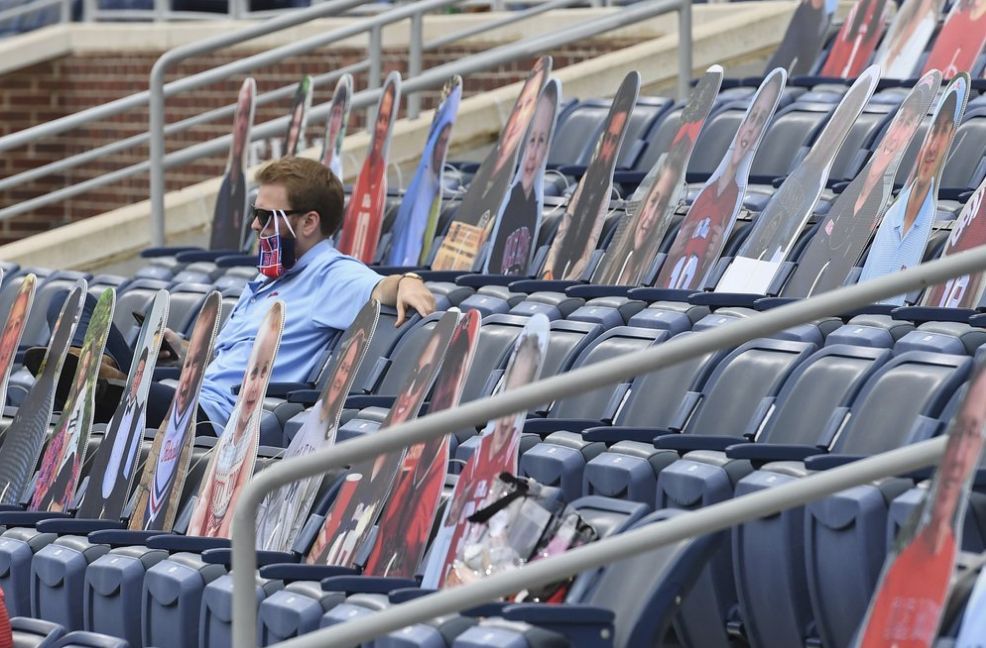 A fan sits among cardboard cutouts of other fans before the first half of an NCAA college football game between Mississippi and Florida in Oxford, Miss., September 26, 2020. /AP

A fan sits among cardboard cutouts of other fans before the first half of an NCAA college football game between Mississippi and Florida in Oxford, Miss., September 26, 2020. /AP

"You can't simply wish (students) away, nor should you," Blank said in a statement directed at Parisi.

Amid the fighting, thousands of students around the country have been quarantined in dorm rooms.

At Kansas State University, more than 2,200 students have been placed in quarantine or isolation since class began. Student Emily Howard was isolated in what students have dubbed "COVID jail" after she and her dorm roommate tested positive for the virus on September 4, just three weeks after arriving on campus.

"Now you walk around campus (and) pretty much everyone says they've had it," Howard said. "Now we don't really care as much because we know we had the antibodies."

Bryan Fisher, a UW-Madison freshman quarantined in the dorms, said students were allowed to leave only to get food from the dining hall, and they were given only 30 minutes to make each trip. He said he spent his time studying and watching movies.

"We were pretty much stuck in here," Fisher said. "It's been pretty hard to meet new people. Everyone's expectations of college aren't what they were."

The University of Connecticut on Friday placed a third dormitory under medical quarantine. More than 150 students have tested positive.

The University of Missouri has had more than 1,500 confirmed cases among students since classes began. The school plans to limit the crowd at Saturday's home football opener against Alabama to no more than 11,700 fans, leaving the stands about 80 percent empty.

Florida State on Friday decided to require that students test negative for the virus a week before a football game before being allowed to attend and must wear masks in the stands. Seminoles coach Mike Norvell tested positive for the virus last week.

Despite the attempts at mitigation, student cases have sent local county infection numbers soaring. Schools' decisions to push on with the semester have frustrated some faculty and local community leaders.

Faculty members at Appalachian State in August approved a no-confidence vote against Chancellor Sheri Everts over university finances, morale and reopening plans. Everts has said she has received support from the school's Board of Trustees.

The University of Michigan faculty took a no-confidence vote against President Mark Schlissel earlier this month. Faculty felt Schlissel’s administration hasn’t been transparent about reopening decisions and hasn’t released any modeling gauging the health risks. Graduate students went on strike Sept. 8 to protest reopening. Schlissel has acknowledged that trust in his leadership had slipped, but the university’s governing board expressed support him this week.

"Colleges and universities are ... under immense pressure to remain open," said Chris Mariscano, director of the College Crisis Initiative, a research project at Davidson College tracking the effects of the virus on higher education. "When the president of the United States starts tweeting (about staying open), you understand just how much politics is playing a role here and institutional survival is playing a role here."

University officials across the country say they hope to bolster testing and contact tracing as the semester continues. But Mariscano said universities should expect college students to act like college students.

At Kansas State, Howard was not especially concerned about the virus and didn't mind the "COVID Jail," where students got free laundry service and their own bedrooms.

"I personally am not too worried about it, and everyone I have talked to is not that worried about it," she said. "I think it is more like, you are going to get it. It's just a matter of when."

(Cover image: Auburn students are scanned to check for a health screening questionnaire before entering the stadium for the start of an NCAA college football game between Auburn and Kentucky, September 26, 2020. /AP)