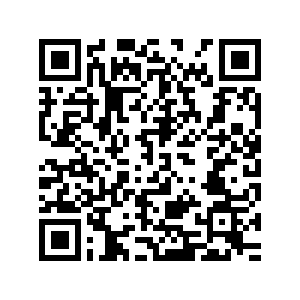 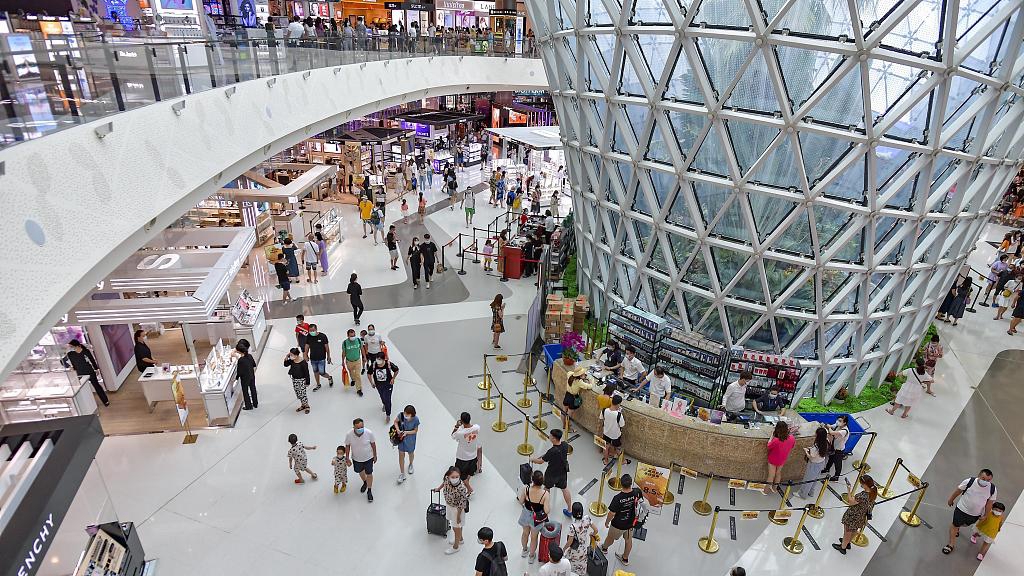 Strong containment of the COVID-19 outbreak in China is helping the country step up its recovery efforts, especially in the space of luxury goods.

The Chinese market makes up a large share of the global luxury goods market. According to McKinsey's China Luxury Report 2019, Chinese consumers at home and abroad spent 770 billion yuan ($115 billion) on luxury items in 2018 – almost a third of the global spend.

One of the major reasons why Chinese choose to buy luxury goods abroad is that China's import tax system and brand pricing strategy means luxury goods are priced higher domestically than abroad.

Currently, China taxes imported consumer goods such as garments and beauty products an average of 6.9 percent and high-end cosmetics by 15 percent. But tariffs for many luxury products such as perfumes and watches exceed 30 percent.

However, at the Sunrise Duty Free's online shopping mall, which was launched in February by the major airport duty-free shop operator in China, members can buy a tub of Estee Lauder eye cream, normally priced at 520 yuan in stores, for less than 300 yuan in its official Taobao shop. 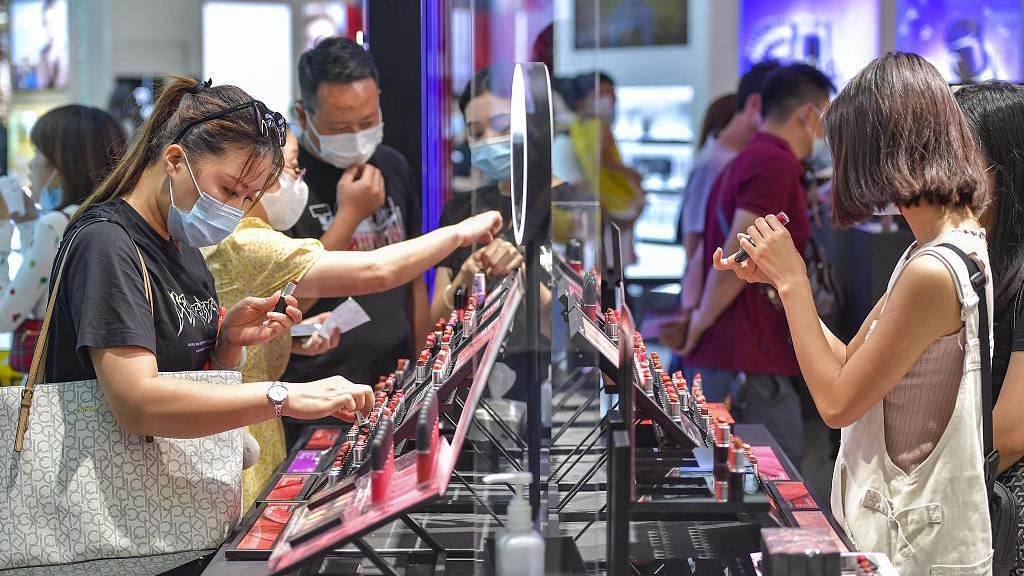 In addition, starting from July 1, the quota for individuals making duty-free purchases in Hainan was tripled to 100,000 yuan a year, with the duty-free product catalog increasing from 38 to 45 items and some electronic products and wines newly added to the duty-free list.

Thus, duty-free shops in China, especially in the southern province of Hainan, which allows for Chinese travelers and not just international travelers, has seen a surge in sales.

According to statistics from Haikou Customs, Hainan recorded 8.61 billion yuan of duty-free spending by visitors from July 1 to September 30, a surge of 227.5 percent year on year.

During the period, cosmetics, watches and jewelry were the most popular items, accounting for 73.3 percent of the total sales revenue.

China Tourism Group Duty Free Corp reported a total of 19.3 million yuan in first-half revenue, making China Duty Free Group (CDFG), the duty-free retailing giant in China who owns all four offshore duty-free shops in Hainan, the world's largest duty free retailer for the first half of the year by turnover, according to The Moodie Davitt Report.

After being hit by the pandemic, the CDFG parent company's recovery was primarily driven by sales in Hainan, which accounted for 47 percent of the company's revenue in the first half.

As of August 1, 2020, there are 313 duty-free shops of various types distributed in 31 provinces with popular products including fragrances, cosmetics, clothing, shoes and bags, as well as maternal products. 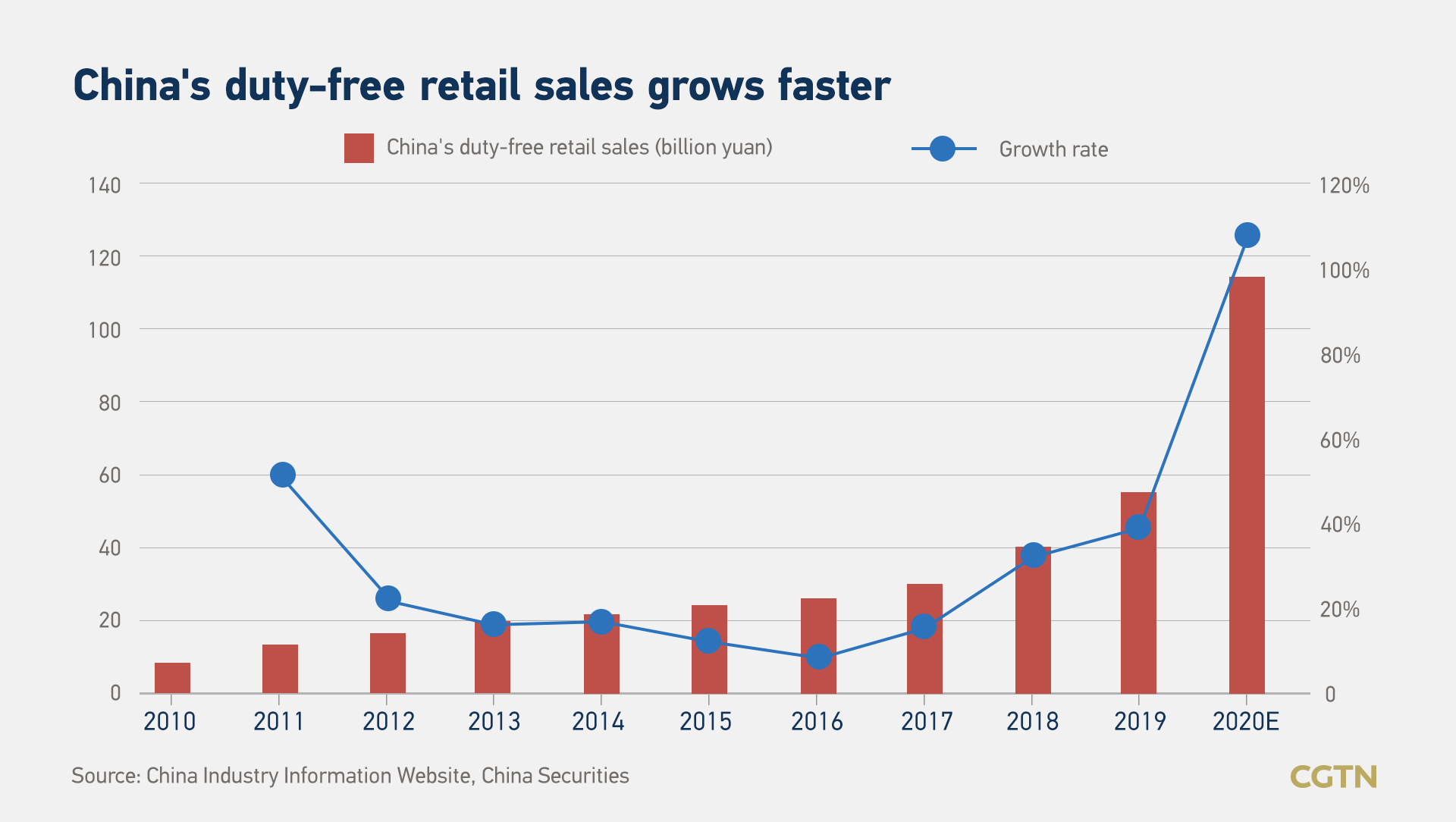 There are currently eight companies operating in the duty-free business in China. CDFG (including Sunrise Duty Free) accounted for the largest proportion of market shares, about 85 percent in 2019. While the downtown duty-free shops are mainly operated by CNSC, with more than 10 stores. 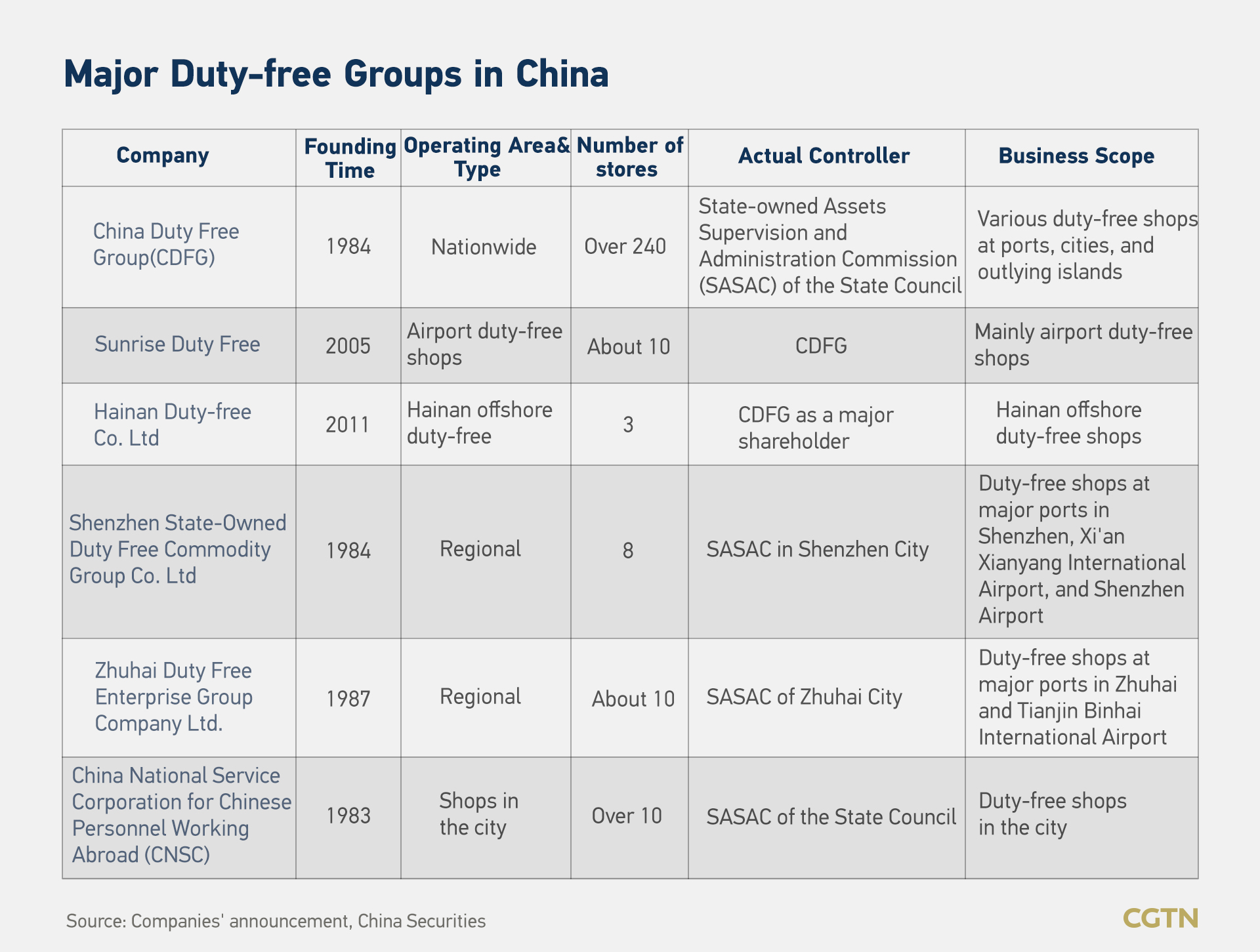 "Wangfujing's obtaining duty-free license will indeed have a certain impact on CDFG. Anyhow, CDFG, which has always been in a dominant position, has a new competitor. The moderate competition also contributes to the healthy development of the duty-free industry," said Bai Ming, deputy director of the Academy of International Trade and Economic Cooperation in Ministry of Commerce.

"However, Wangfujing alone will still face difficulties in shaking CDFG's position, because Wangfujing's advantage lies in downtown duty-free, that is, it can rely on or share the offline retail facilities and resources, but its offline stores are only distributed in some large cities in China. In other words, it is difficult to use its advantages in areas other than these large cities," he added.

Zeng Guang, chief analyst of Guosen Securities told Securities Times that whether the license will be approved in the future depends entirely on the attitude of the decision-makers. Having a license does not necessarily mean that there is a business.

From an investment perspective, Zeng said that "taking South Korea as an example, small operators are seeing difficulties growing even with a license, and the leading enterprises are still the winner in the end. From a global perspective, it is the same, because the tax exemption itself requires the assistance of scale advantages and channel advantages."

In 2018, China's outbound tourism market grew to 149 million people, a year-on-year increase of 14.7 percent compared to 2017, according to the report released by China Tourism Academy. The overseas consumption of Chinese tourists exceeded $130 billion, a growth rate of over 13 percent.

Meanwhile, Chinese consumers also begin to buy more at home. A report from Bain showed that Chinese made 27 percent of their luxury purchases in China in 2018, up from 23 percent in 2015, and forecasted the share may increase to 50 percent by 2025. 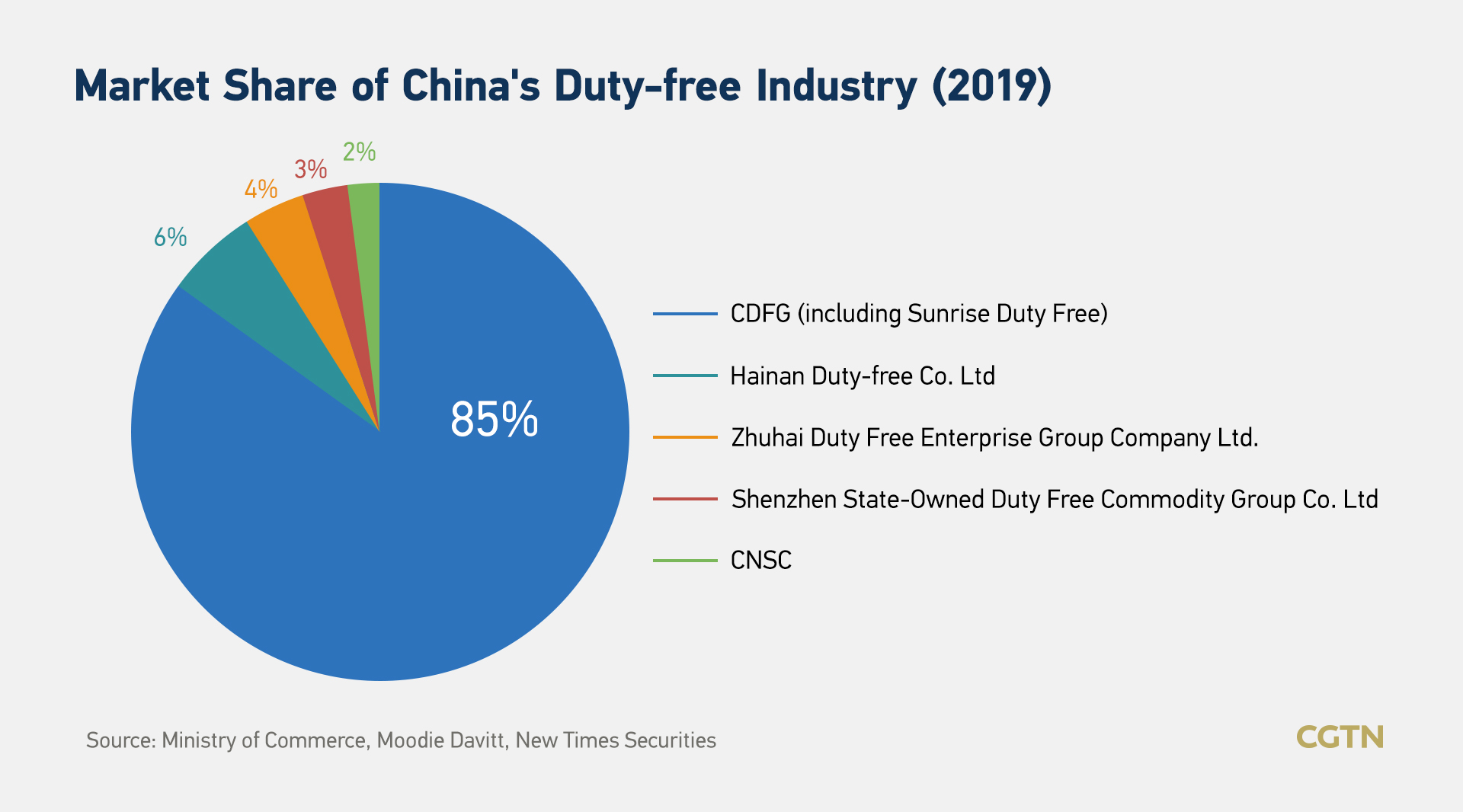 Wang Xuan, general manager of the Hainan headquarters of China Tourism Group said: "Driven by the new duty-free policy, the spending power of Chinese people who make purchases in Korea, Japan and Europe will be attracted back to Hainan."

The expansion of the duty-free market will help leading companies in the industry have stronger bargaining power when facing brand owners, provide consumers with better services and more promotional measures, thereby accelerating the release of consumption potential, Xinhua cited Tang Jiansheng, an official of the Shanghai Consumer Rights Protection Commission.

It will also play a greater role in promoting a dual-cycle development pattern – an initiative recently introduced by President Xi Jinping – where the domestic and international dual cycles promote each other, he added.

"The duty-free policy has attracted people to travel to Hainan for consumption, which will create more jobs. Although the country collects fewer taxes, dividends are also brought," Bai said.

However, he stressed that it does not mean that the more tax exemptions, the better. "It depends on whether tax exemptions can show greater leverage and activate more economic vitality."