U.S. President Donald Trump walks to Marine One on the South Lawn of the White House in Washington, D.C., on October 1, 2020. /Getty Images

U.S. President Donald Trump walks to Marine One on the South Lawn of the White House in Washington, D.C., on October 1, 2020. /Getty Images

Unlike tens of millions of people around the world who have contracted COVID-19 because of their poverty, bad luck, vulnerability as essential workers, or poor decisions by policymakers, U.S. President Donald Trump's infection is of his own making.

Trump's disdain for science and his brazen disregard for public-health advice led directly to his own illness; far worse, they have fueled America's soaring COVID-19 death toll – now at more than 214,000.

Since the pandemic began, public health experts around the world have begged the public to wear face masks, avoid large gatherings, and maintain physical distance from others, in order to stop the transmission of the virus. Leave it to Trump, a man of pathological disposition, to reject all such advice.

Barely two days before announcing that he and the First Lady had tested positive, Trump was mocking Joe Biden for wearing one. "I don't wear a mask like him," Trump said at the first presidential debate. "Every time you see him, he's got a mask. He could be speaking 200 feet away…and he shows up with the biggest mask I've ever seen." 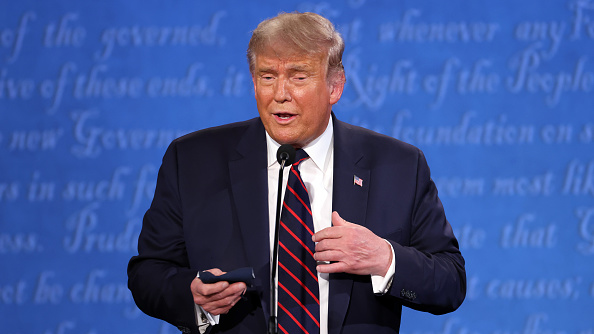 Rejecting appeals by public health experts and local officials, Trump had been holding large rallies both indoors and outdoors in recent months, with non-masked attendees standing close together. And Trump spurned basic precautions in the White House, including physical distancing of staff and requiring face masks in meetings.

Trump's recklessness not only exposed himself, his wife, and his entourage to COVID-19; it also encouraged his supporters across America to mock public-health warnings and threaten infectious disease experts, thereby contributing to the spread of the disease. Many Americans lack basic scientific literacy and are easily swayed and encouraged by manipulators like Trump and his allies at Fox News. Trump not only blocked an effective federal public-health response, but incited dangerous behavior by his followers nationwide.

Like other world leaders who have contracted COVID-19, Trump could easily have avoided being infected by observing normal public-health strictures. It is not a coincidence that populist politicians in Trump's mold, notably UK Prime Minister Boris Johnson and Brazilian President Jair Bolsonaro, also became infected.

Like Trump, both Johnson and Bolsonaro systematically downplayed the threat of the pandemic and brazenly flaunted routine public-health measures. And, like the United States, the United Kingdom and Brazil are among the world's hardest-hit countries, with a COVID-19 death rate of 647 per million population in the U.S., 687 in Brazil, and 623 in the UK, compared with a global average death rate of 133 per million.

Of course, Trump's anti-scientific dispensation has deeper roots in recent American politics and culture. It fits with two purposes of the modern Republican Party going back to Ronald Reagan. The first is to mobilize the GOP's white, evangelical Christian base. Their rejection of science is rooted in the literal interpretation of Scripture – a belief known as Biblical inerrancy.

The second, related reason is the rabid anti-environmentalism of the modern Republican Party, which has been lavishly funded by Big Oil and Big Coal for decades in exchange for actions to block and reverse regulations aimed at environmental conservation and climate safety.

It is no coincidence that Trump not only rejects the basic science of controlling COVID-19, but also rejects basic climate science even in the midst of the horrific wildfires raging in the U.S. west. Just as he declared that the virus would simply fade away, he recently promised that global warming would magically stop: "It will start getting cooler. Just you watch."

As an aside, Bolsonaro is a near-clone of Trump in this respect. With his base of Christian evangelicals and his radical anti-environmentalism, rejection of climate science, and policies favoring Brazil's oil industry, he has governed in the same way.

But Trump does not represent a departure from GOP policies in this respect. A quarter-century ago, Newt Gingrich, as Republican Speaker of the U.S. House of Representatives, forced the closure of Congress's Office of Technology Assessment, which had provided scientific and technological guidance to members of Congress. Gingrich's aim was to prevent environmental science from informing regulations affecting industries that support the Republican Party.

Trump's anti-scientific agenda has endangered the entire world. Under his administration, the U.S. has withdrawn from the Paris climate agreement and the World Health Organization, thereby frustrating the global fight against climate change and against COVID-19. Instead of addressing global crises on the basis of scientific evidence, Trump and his evangelical secretary of state, Mike Pompeo, have tried to launch a Christian crusade against China.

It is hard to know whether Trump's COVID-19 infection will cause more Americans to wake up to the realities of public health and climate change. The truth has been battered long and hard by the Republican Party and its allies. Fox News, evangelical belief in Biblical literalism, and corporate propaganda and campaign contributions have profoundly undermined America's propensity to base policies on science and evidence rather than lies.

I hope that Trump recovers from his illness. But, because that won't help America recover from his misrule, I also hope that Biden wins a landslide victory in next month's election. In that case, Trump would likely spend 2021 reviewing, under oath, a very different kind of evidence, concerning charges related to his bank and insurance fraud now being investigated by New York prosecutors.